It is difficult to estimate the abortion rate in Australia, as most states do not routinely report abortion data, and published national data have been incomplete.1 Consequently, some clinicians and academics have been accused of inflating reported rates for political reasons.2 National data have not been published in the peer‐reviewed literature since 2005.3 However, “abortion with operating room procedure” (65 451 procedures) was reported to be the third most frequent surgical procedure in Victorian hospitals during January 2014 ‒ December 2016.4 Prompted by this report, we sought to provide an updated estimate of the national abortion rate for women in Australia. Our study was approved by the University of Melbourne Human Research Ethics Committee (2021‐21757‐16379‐2).

First, we analysed publicly available National Hospital Morbidity Database (NHMD) data for 2014–18. The NHMD includes data on all episodes of care in private and public Australian hospitals and day procedure clinics.5 While some data collections do not distinguish between dilatation and curettage procedures for miscarriage or non‐pregnancy‐related conditions and those for inducing an abortion,1 the NHMD categorises separations according to Australian Refined Diagnosis‐Related Groups (AR‐DRG).6 Abortion procedures are defined as “abortion with operating room procedures” in major diagnostic category 14 (pregnancy, childbirth and the puerperium), while non‐pregnancy‐related dilatation and curettage procedures are included in major diagnostic category 13 (diseases and disorders of the female reproductive system). NHMD reports these data by five‐year age group but otherwise aggregated for the entire Australian population. We estimated the number of surgical abortions by combining the numbers of “abortions with operating room procedure” (AR‐DRG: O05Z) and “abortions without operating room procedures” (AR‐DRG version 7.0, 2013‒16: O63Z; version 8.0, 2016‒18: O63A or O63B). Age‐ and year‐specific abortion rates for 2014‒15 to 2017‒18 were calculated by dividing the number of abortions by the corresponding population number.7

While we can confidently estimate the number of abortions in Australia, we will have slightly overestimated the number of pregnancies terminated, as about 5% of medical abortions are incomplete or complicated; in these cases, women may be admitted to hospital for surgical abortions.10

The combination of publicly available NHMD and PBS data can be used to study changes in abortion rate in more detail than previously. Surgical abortion is a common medical procedure in Australia, but the rate has declined by 5.1% per year since the PBS listing of combination mifepristone/misoprostol. We recommend further analysis of local data, both to ensure that this medical procedure is provided across Australia, and to contribute to the evidence base informing interventions to improve sexual and reproductive health.

Box – Rates of surgical abortion performed for all women in hospitals and day clinics, Australia, 2015‒18, by 5‐year age group 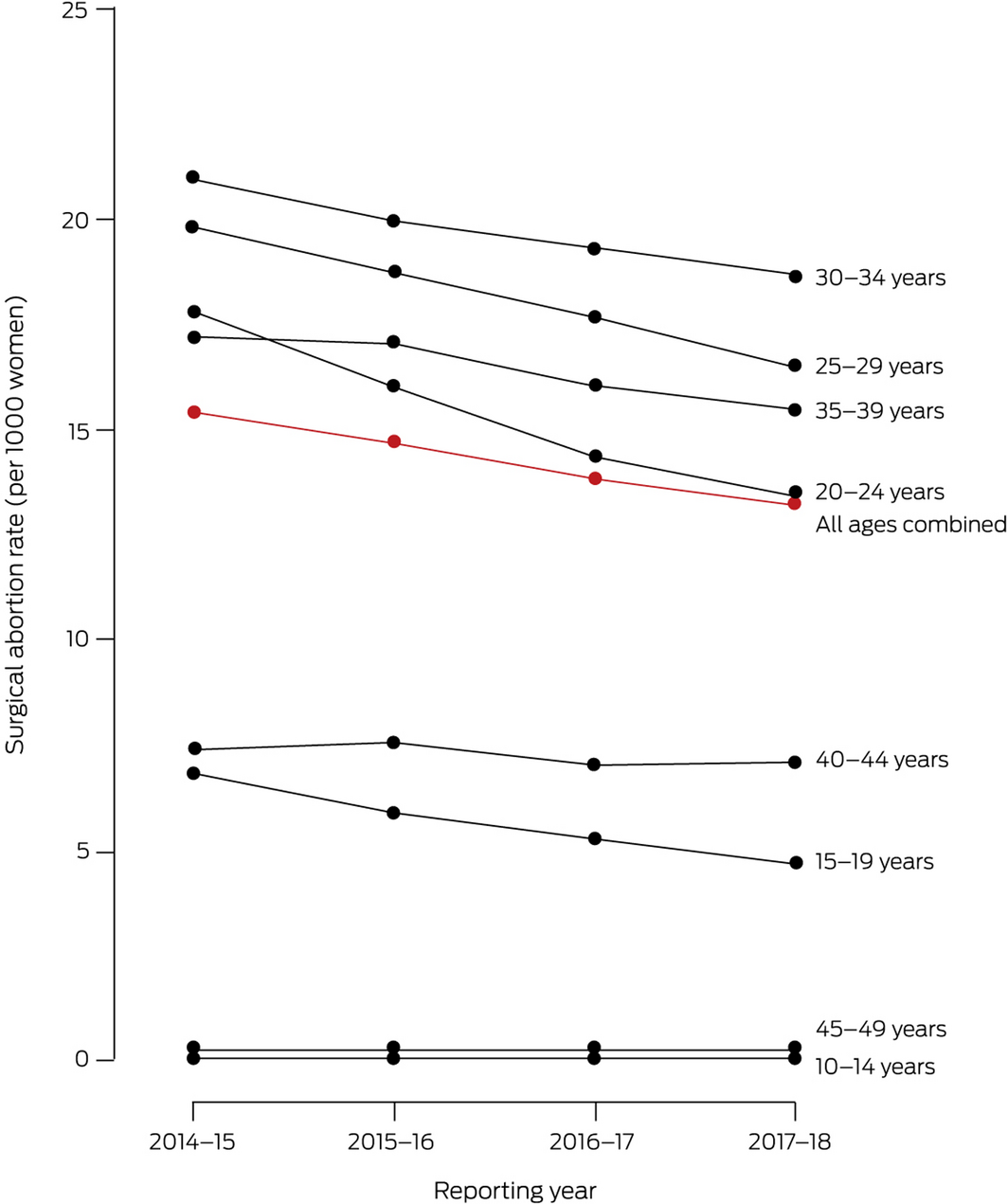