Objective: To compare the concordance and acceptability of saliva testing with standard‐of‐care oropharyngeal and bilateral deep nasal swab testing for severe acute respiratory syndrome coronavirus‐2 (SARS‐CoV‐2) in children and in general practice.

Main outcome measures: Numbers of cases in which SARS‐CoV‐2 was detected in either specimen type by real‐time polymerase chain reaction; concordance of results for paired specimens; positive percent agreement (PPA) for virus detection, by specimen type.

The known: Real‐time polymerase chain reaction testing of oropharyngeal and bilateral deep nasal swabs for SARS‐CoV‐2 is standard of care in Australia.

Australian guidelines recommend collecting a oropharyngeal and bilateral deep nasal swab for real‐time polymerase chain reaction (PCR) detection of severe acute respiratory syndrome coronavirus‐2 (SARS‐CoV‐2).1 Collecting saliva is less invasive and can be easily undertaken by the tested person themselves, reducing viral exposure for health care workers.2 Four meta‐analyses have found that the pooled sensitivity of saliva real‐time PCR testing for SARS‐CoV‐2 is 84–86% of that with upper respiratory swabs.3,4,5,6 In an analysis of data from 12 groups of tested persons, the overall test concordance between saliva and upper respiratory swabs was 92.1% (κ = 0.84; 95% confidence interval, 0.80–0.87).7

We conducted a multicentre diagnostic validation study including participants recruited from three respiratory clinics in Melbourne paediatric and general practices during the second wave of SARS‐CoV‐2 infections in Victoria.17 We adhere to the Standards for Reporting of Diagnostic Accuracy Studies (STARD) 2015 guidelines.18

Research nurses recruited participants (21 July – 18 September 2020) and collected the specimens. Saliva was collected from children under five years of age in a SalivaBio swab and storage tube (Stratech Scientific); older participants were asked to dribble at least 2 mL saliva into a collection pot without transport medium. All participants underwent standard‐of‐care oropharyngeal‐nasal swabbing (dry FLOQSwabs, Copan). Specimens were tested in the Royal Children’s Hospital diagnostic molecular microbiology laboratory. Swabs were eluted into 500 µL phosphate‐buffered saline (PBS); saliva specimens (except those collected with the SalivaBio system) were diluted 1:1 in PBS. For each specimen type, nucleic acids in 200 µL preparations were extracted with the MagNA Pure 96 extraction system (Roche). Extracts were tested with the LightMix modular SARS and Wuhan CoV E‐gene kit (TIB Molbiol) in the LightCycler 480 II real‐time PCR system (Roche). The status of E‐gene‐positive specimen extracts was confirmed with the Respiratory Pathogens 16‐well assay (targeting the open reading frames ORF‐1 and ORF‐8) on the High‐Plex 24 unit (AusDiagnostics).

Participants or their guardians were invited to complete a survey about their symptoms and their specimen collection preferences. At the Royal Children’s Hospital, surveys were administered by research nurses, who also collected exposure risk factor data. For general practice participants, an online REDCap survey was accessed via a QR code (cohealth, West Melbourne) or texted to the participants’ mobile phones (Cirqit Health, Altona North); exposure risk factor data were not collected.

A specimen was deemed positive if at least two SARS‐CoV‐2 gene targets were detected, consistent with national guidelines.1 All positive tests were considered true positives; that is, a participant was deemed to be positive for SARS‐CoV‐2 if test results for either specimen type were positive. Specimens with indeterminate, invalid, or missing results (including saliva specimens with insufficient volume for testing) were deemed non‐assessable and excluded from analysis.

Analyses were undertaken in Stata 16; P < 0.05 was deemed statistically significant.

A total of 1165 participants were recruited, of whom 115 (10%) were excluded because of non‐assessable results; 110 saliva specimens were non‐assessable (9%), including 86 with insufficient volume for testing and four that leaked (Supporting Information, figure).

Of the 1050 included participants, 176 were children under 10 years of age (17%) and 749 were recruited from general practices (71%). In 54 cases (5%), SARS‐CoV‐2 was detected in saliva or oropharyngeal‐nasal swabs; their median age was 27.6 years (range, 6 months to 65 years), and 30 were men. Twenty‐two of the 38 SARS‐CoV‐2‐positive people for whom risk factor data were available had been close contacts of people with confirmed SARS‐CoV‐2 infections (58%), and 19 of the 38 for whom symptom information was available reported symptoms at the time of specimen collection, most frequently cough (nine people, 24%) (Box 1). For ten of the 11 SARS‐CoV‐2‐positive people who reported symptoms and for whom the symptom onset date was known, symptom duration was less than four days at the time of specimen collection (median, 2 days; range, 0–12 days).

Accurately identifying people with SARS‐CoV‐2 infections is essential for case management and preventing transmission. We found that testing saliva as well as the standard‐of‐care oropharyngeal‐nasal swab increased case detection by 59%. The overall PPA for saliva testing was similar to that for oropharyngeal‐nasal swabs, but saliva testing alone would have missed ten of 19 infections (53%) in children under 10 years of age.

Three in four people preferred providing saliva to undergoing oropharyngeal‐nasal swabbing, including more than 90% of children under 10 years of age. Saliva collection was considered more comfortable, more convenient, and preferable to self‐collected nasopharyngeal swabs in a study in Singapore.20 An online discrete choice experiment survey of 4793 adults found that nasopharyngeal swabbing may deter people from being tested, a problem that could be mitigated by using saliva specimens.21 Saliva testing may be particularly attractive for people unwilling or unable to undergo oropharyngeal‐nasal swabbing and in settings where repeat testing is desired, such as higher risk workplaces.

In addition to the comparator specimen used, our study differed from similar studies with respect to testing children. In a Singapore study of 18 children diagnosed with COVID‐19 (using nasopharyngeal swabs), peak sensitivity of saliva testing (52.9%) was on days 4–7;9 in a Korean study of 11 children diagnosed with COVID‐19 (using nasopharyngeal swabs), overall sensitivity of saliva testing was 73%, but fell from 80% (week 1) to 11% (week 3).10 The denominators for the sensitivity calculations in both these studies comprised children with SARS‐CoV‐2‐positive nasopharyngeal swabs, assumed to be the gold standard. As our study included 176 children under 10 years of age (and 212 people under 18 years) with suspected COVID‐19, we could more fully explore the role of saliva testing for detecting SARS‐CoV‐2. We included cases in our PPA denominator for which positive test results were obtained with either specimen, recognising that there is no gold standard test specimen. We would have missed 37% of SARS‐CoV‐2‐positive children under 10 had paired saliva specimens not been added to the oropharyngeal‐nasal swab for testing, consistent with other recent studies in children.13,14

An important limitation was that 9% of saliva specimens were non‐assessable, most frequently because the volume was inadequate. Another study found that at least one‐third of pure saliva specimens were difficult to pipette.25 A much lower invalid specimen rate (0.03%) pertained when saliva was collected with a straw‐like device, followed by centrifugation and the addition of proteinase K.26 Other options to reduce the invalid specimen rate could include participant education, marking the required volume on the collection pot, and using alternative collection devices.27 When saliva volume was adequate for testing, the higher SARS‐CoV‐2 detection rate than with oropharyngeal‐nasal swabs may have been related to the larger specimen volume.

We undertook a rapid real life study, assessing saliva collection and testing in symptomatic and asymptomatic people in several settings, including a drive‐through testing centre. In settings of low incidence, targeted sampling may be required to increase the number of SARS‐CoV‐2‐positive cases and to increase study power. As the local incidence of COVID‐19 was declining rapidly during the recruitment period, we focused on people known to be SARS‐CoV‐2‐positive and their close contacts to achieve our target sample size. We could not synchronise procedures and recruitment across sites because of staff workloads and the embedded nature of specimen processing. Real‐time PCR analysis was undertaken in two laboratories using different assay platforms. Results from assays using differing detection parameters were pooled. We assumed that all positive results were true positives; that is, we did not allow for potentially false positive results. At the Royal Children’s Hospital, we used a different saliva collection method for children under 5 years of age, limiting the comparability between study sites of findings for this age group.

Testing paired saliva and oropharyngeal‐nasal swab specimens for SARS‐CoV‐2 increases the detection of infections, particularly in children under 10 years of age. In older children and adults, testing saliva alone may be appropriate given the general preference of people for saliva collection to oropharyngeal‐nasal swabbing and the adequacy of SARS‐CoV‐2 detection in saliva. 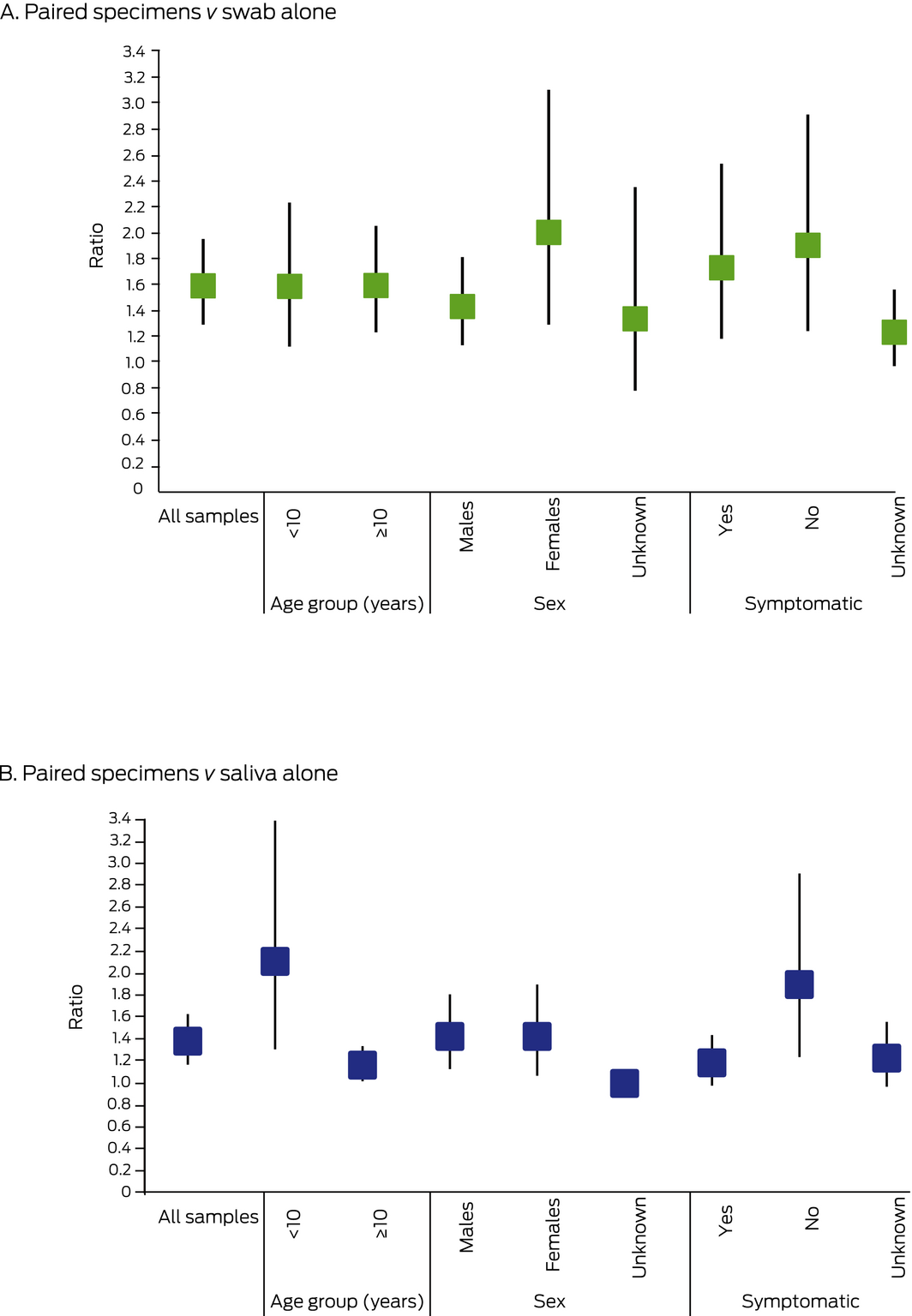 The raw data for this graph is included in the Supporting Information, table 3.

Our study was supported by a donation from the Isabel and John Gilbertson Charitable Trust. We acknowledge all participants, and the clinical, administrative and laboratory staff who assisted our study at the Royal Children’s Hospital Melbourne, cohealth, Cirqit Health, the Microbiological Diagnostic Unit Public Health Laboratory, Golden Messenger, the Royal Melbourne Hospital, and the University of Melbourne.