Measuring prostate‐specific antigen (PSA) levels is widely used for screening for the early diagnosis of prostate cancer.1 However, the value of PSA testing for reducing prostate cancer‐specific or all‐cause mortality in asymptomatic men is uncertain.2 The Prostate Cancer Foundation of Australia and the Cancer Council of Australia recommend that men aged 50–69 years be offered biennial PSA testing if they make an informed decision to be tested.1

We investigated age‐specific patterns of PSA testing and PSA levels in men aged 40 years or more without symptoms of prostate cancer. We analysed routinely collected data from 180 Victorian general practices, pooled by the data custodian, Outcome Health.3 We included all men who had attended the same practice at least three times during October 2016 – September 2018. We identified tested men and testing frequency from recorded PSA test results. PSA testing prevalence was defined as the number of men tested at least once divided by the total number of men in an age group. We evaluated the relationship between log‐transformed PSA levels and age as a continuous variable in a linear regression model. The Royal Australian College of General Practitioners National Research and Evaluation Ethics Committee (17‐008) and the Macquarie University Human Research Ethics Committee (5201700872) approved our study.

We found that PSA testing prevalence, the proportion of men tested more than once within 24 months, and median PSA levels each increased with age. For men over 69 years of age, this could lead to further invasive tests and treatments, some of which may be unnecessary or cause harm. The high PSA testing prevalence among older men was similar to previous Australian reports (48% of men aged 70 years or more reported they had PSA tests in the preceding two years4), and the PSA levels matched current age‐specific 95th percentile reference ranges.5 Why patterns of testing are different to those recommended (ie, more frequently than biennial and beyond 69 years of age) cannot be explained by general practice data, but reasons may include patient expectations, fragmentation of care, and the persistence of old guideline recommendations.

We have reported the most comprehensive snapshot of PSA testing in Australia based on electronic general practice data since the release of the current guidelines for PSA testing of asymptomatic men. Our study also showed that such data can be used to establish benchmarks for designing quality improvement activities and to promote evidence‐based decision‐making in general practice. 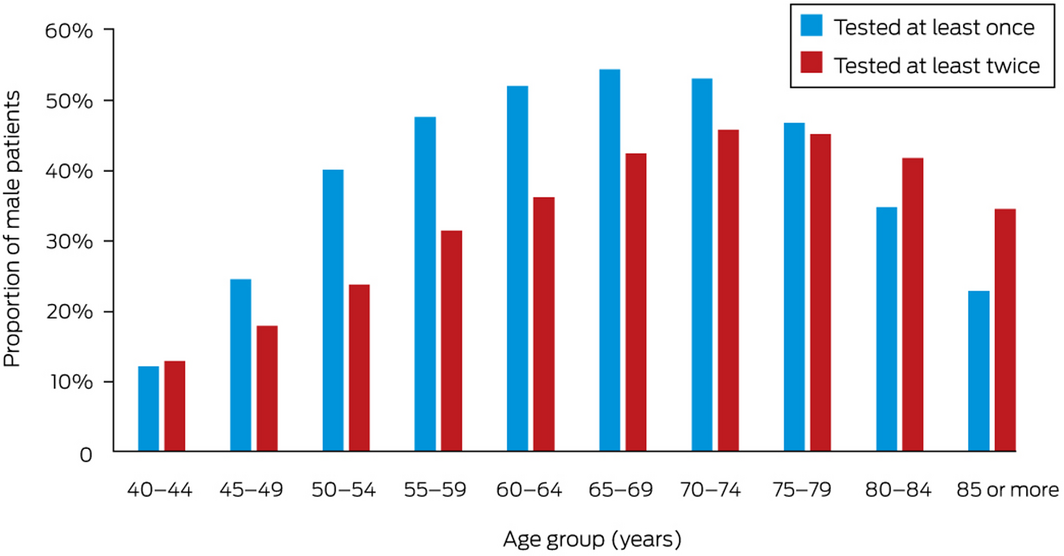 * Proportion of male patients in age group who were tested. It is recommended that men aged 50–69 years be tested once every two years. Numbers of patients in each age group are provided in the online Supporting Information.

This study, a collaboration by Macquarie University, Outcome Health, the Royal College of Pathologists of Australasia Quality Assurance Programs, and three Victorian Primary Health Networks (Eastern Melbourne, South Eastern Melbourne, Gippsland), was funded by the Australian Department of Health Quality Use of Pathology Program (grant 4‐2QFVW4M). We thank the practices that contributed data for their commitment to quality improvement.