Time for universal hepatitis B screening for Australian adults

The United States Preventive Services Task Force recently issued new guidance that all adults aged 18–79 years should be offered screening for hepatitis C virus infection,1 expanding on prior risk‐ and age‐based recommendations. The rationale is that hepatitis C virus infection is a common condition (estimated 1% prevalence) that is leading to an increasing burden of disease from cirrhosis and liver cancer, it is easy to test for, there are well tolerated and highly effective treatments available, and treatment costs have dropped substantially in the past 5 years. The guidance acknowledges that risk‐based screening has been insufficient in increasing the number of people diagnosed and able to access treatment, and further change is needed to address the ongoing burden of adverse outcomes. In Australia, an estimated 80% of people living with hepatitis C have been diagnosed,2 and treatment uptake is among the highest in the world; however, progress in diagnosing people living with chronic hepatitis B is much less impressive. We argue that Australian guidelines for hepatitis B screening should be similarly changed and expand from a risk‐based approach to a more universal one.

Hepatitis B is a condition that affects more than 225 000 Australians,3 and when untreated, it leads to serious adverse outcomes such as liver cirrhosis and cancer in up to one‐quarter of people affected despite being generally asymptomatic.4 Infant vaccination in Australia since 2000 has reduced local transmission,3 but hepatitis B is most commonly acquired at birth or in early childhood when there has been inadequate access to vaccination, and it disproportionately affects Australians born overseas.2 While a cure is not yet available, highly effective antiviral treatments can be accessed through Medicare which have been shown to reduce liver cancer risk by up to 70% within 5 years.5 Based on this evidence, treatment for hepatitis B is recommended in national and international guidelines when there is either cirrhosis or ongoing liver inflammation to reduce morbidity and mortality associated with hepatitis B virus infection.

Australia’s National Strategy for Hepatitis B sets the target of 80% of people diagnosed by 2022, but this proportion has barely improved in recent years, from 63% in 2011 to 69% in 2018.3 Although about 6000 people6 are newly diagnosed with hepatitis B each year, the number of people living with hepatitis B in Australia has continued to increase due to the addition of people who acquired the disease in their country of birth (Box).7 This leaves an estimated 71 000 Australians (plausible range, 32 000–93 000) undiagnosed and at risk of significant adverse outcomes. As this estimate is reliant on underlying model estimates — incorporating data on migration, natural history, immunisation and transmission7 — these data are subject to uncertainty. However, even accounting for this uncertainty, it is estimated that there is only a 4.6% chance that Australia will reach the 2022 target of 80% of cases diagnosed.3

The late diagnosis of hepatitis B in an individual is a missed opportunity for that person to receive appropriate care, including antiviral treatment to prevent liver cancer and cirrhosis.5 In New South Wales in 2011–2012, 29% of people diagnosed with hepatitis B‐related liver cancer were diagnosed late (< 2 years before their cancer diagnosis).8 Failure to diagnose not only affects the individual but is a missed opportunity for family members to be appropriately screened and receive vaccination to prevent transmission of hepatitis B within households. Data indicate only a third of people requiring antivirals to prevent liver cancer or cirrhosis are currently receiving them in Australia.7 Increasing the percentage of people receiving treatment to 20%, as per the National Strategy target, would prevent an estimated 1700 deaths by 2030.7 Improving diagnosis is key to meeting these treatment targets.

For over 25 years, the diagnosis of most people affected by hepatitis B in Australia has relied on risk group‐based screening. The National Hepatitis B Testing Policy lists 16 indications and 13 risk groups that should be considered for testing. Universal screening is only recommended during antenatal care, and a substantial proportion of women are first diagnosed with hepatitis B at this time. For clinicians, conducting a guideline‐based ascertainment of risk is complex, requiring knowledge of country of birth; Indigenous status; history of travel, vaccination, incarceration, and medical procedures; occupation; sexual activity; family history; and previous or current injecting drug use. There is limited evidence regarding the acceptability and uptake of these recommendations, but research assessing general practitioner attitudes to hepatitis B has identified discomfort with profiling patients based on cultural background.9 A study of GPs identified that 33% were not aware people from these communities are the main at‐risk population for hepatitis B, and 67% agreed that assistance with identifying patients who should be tested was needed.10 This targeted approach to testing can also contribute to the experience of stigma and discrimination among people affected by or at risk of hepatitis B, particularly given the structural and health care inequalities experienced by many members of these groups.

Chronic hepatitis B meets all the World Health Organization criteria for disease screening:11

A further advantage with hepatitis B is that, given the availability of a highly effective vaccine and the generally lifelong nature of infection, screening will usually only need to be done once. Subsequently, one‐time screening will simplify patient engagement in regular follow‐up and monitoring, with most needing annual recall for reimbursed blood tests and liver ultrasounds (for Medicare‐eligible people, the majority of Australians living with hepatitis B). Community engagement strategies including community codesigned and place‐based outreach programs will also be essential. Although some hepatitis B community outreach occurs in Australia, it is profoundly underfunded compared with other community programs such as those for the human immunodeficiency virus (HIV), and increased investment will be central to supporting a more universal testing approach.

The current risk‐based screening approach for hepatitis B in Australia has failed to meaningfully increase the proportion of people diagnosed with this disease in the past decade, and we argue that it is time for a radical rethinking of our approach to testing for hepatitis B. Although difficult to quantify due to crossover in populations, given the breadth of the existing screening criteria — including all women who have been pregnant in the screening era (3.5 million Australians), all migrants from countries with more than 2% prevalence (2.1 million), all Aboriginal or Torres Strait Islander people (850 000), all adults at higher risk of infection (1.4 million), and any person with existing liver disease (over 5 million) — it is likely that most of Australian adults meet least one screening criteria, and a universal approach would represent a relatively small expansion in the total number eligible.

We believe that guidelines should now recommend that all Australians aged 20–79 years whose hepatitis B status has not been documented should be offered testing. This minimum age coincides with the enactment of universal hepatitis B vaccination in Australia, which led to a substantial reduction in prevalence. However, screening would still be required in cases where a child was born overseas or was born in Australia to a mother living with hepatitis B. The upper age limit for offering testing may not reach cost‐effectiveness thresholds; however, this has not been locally established and there is evidence that older Australians have a considerable burden of hepatitis B6 and liver disease.7 Offering testing should always be conducted within the context of informed consent,16 and given most tests currently take place in primary care settings, GPs should be supported to incorporate hepatitis B screening into standard preventive health care for all adults.2 In line with Australia’s historical approach to blood‐borne virus responses, involvement of community and professional organisations and people with lived experience should be central to implementation.

There is a need to change the way we approach testing for hepatitis B in Australia as we fail to meet both interim and longer term targets.7 Innovation and simplification of our testing policy are necessary to reach people unaware of their risk, encourage clinicians to test, and reduce stigma and discrimination associated with questioning people about risk factors. This approach would help integrate routine hepatitis B screening and care into primary care.

A fundamental change is needed if Australia is to meet our National Strategy targets for 2022 and the WHO elimination targets for 2030. Importantly, it would allow the more than 70 000 Australians with undiagnosed hepatitis B7 to be informed about their condition and to enable them to access care and potentially life‐saving treatment. To not do so will further entrench the status quo and the ongoing preventable morbidity and mortality associated with late diagnosis of hepatitis B.7,8 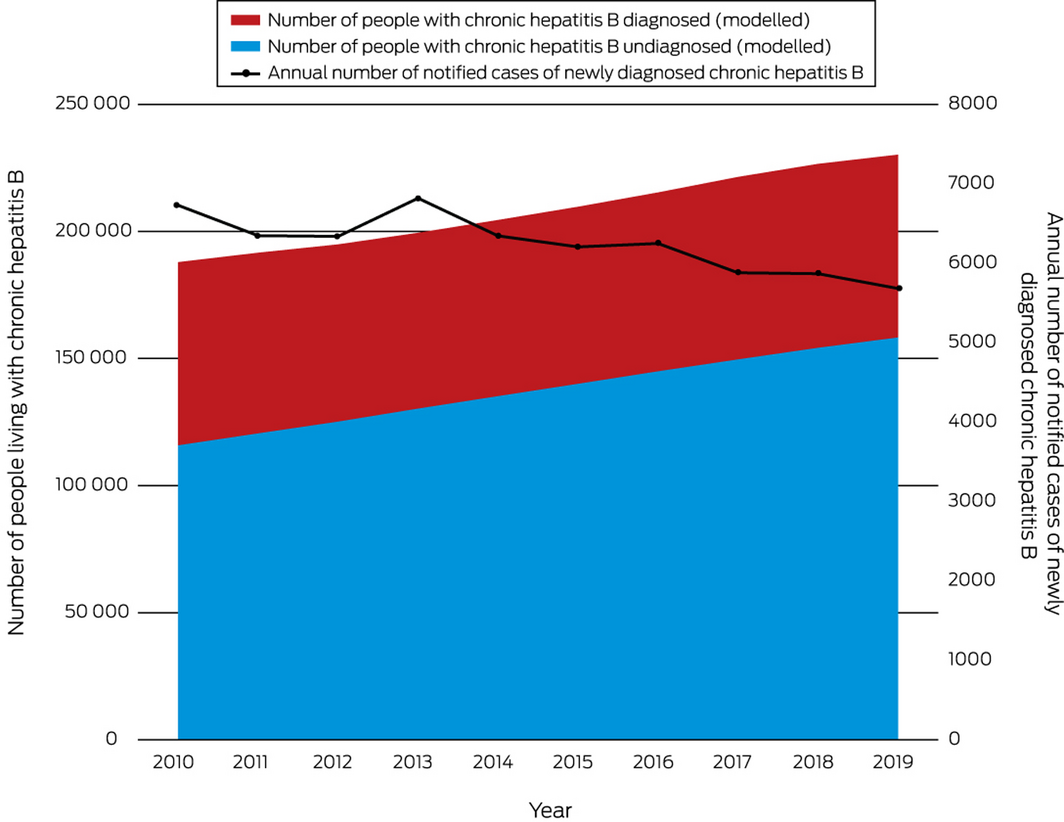