Surgical outcomes for people with serious mental illness are poorer than for other patients: a systematic review and meta‐analysis

Objective: To assess the association between having a serious mental illness and surgical outcomes for adults, including in‐hospital and 30‐day mortality, post‐operative complications, and hospital length of stay.

Study design: Systematic review and meta‐analysis of publications in English to 30 July 2018 of studies that examined associations between having a serious mental illness and surgical outcomes for adults who underwent elective surgery. Primary outcomes were in‐hospital and 30‐day mortality, post‐operative complications, and length of hospital stay. Risk of bias was assessed with the Quality in Prognosis Studies (QUIPS) tool. Studies were grouped by serious mental illness diagnosis and outcome measures. Odds ratios (ORs) or mean differences (MDs), with 95% confidence intervals (CIs), were calculated in random effects models to provide pooled effect estimates.

Conclusions: Having a serious mental illness is associated with higher rates of post‐operative complications and longer stays in hospital, but not with higher in‐hospital or 30‐day mortality. Targeted pre‐operative interventions may improve surgical outcomes for these vulnerable patients.

Patients with serious mental illness who require surgical care are routinely treated in non‐psychiatric hospitals.1 As the prevalence of serious mental illness is relatively low (2–3% in Australia2), it is unsurprising that surgeons only infrequently ask patients about their mental health before operations, and lack confidence in caring for these vulnerable and complex patients.3

Serious mental illness should be treated like any other medical comorbidity and managed pro‐actively, both before and after surgery, to optimise the patient’s care. This ideal is realised for some surgery types, such as solid organ transplantation and bariatric surgery,4,5 but established care pathways for patients undergoing routine surgical treatment are rare. Further, patients with serious mental illnesses have a higher burden of chronic disease,6 experience negative attitudes from a range of health professionals,7,8,9,10,11 and may find navigating complex health systems difficult.12,13

Several studies have investigated surgical outcomes for people with serious mental illness, but there have been few reviews; findings with regard to relative mortality and morbidity have been mixed, and the overall risk for these vulnerable patients is unclear. The aim of our systematic review and meta‐analysis was to develop a greater understanding of the association between having a serious mental illness and outcomes of elective surgery for adults, including in‐hospital and 30‐day mortality, hospital re‐admission, post‐operative complications, and hospital length of stay.

We employed the methods recommended by the Cochrane Methods Prognosis Group14 and our review protocol concords with the PRISMA‐P statement15 (PROSPERO registration, CRD42018080114; 30 January 2018).

We searched MEDLINE, EMBASE, PsychINFO, and the Cochrane Library for publications in English to 30 July 2018 of studies that examined associations between having a serious mental illness and surgical outcomes in adults who underwent elective surgery; the final search was conducted on 15 August 2018 (online Supporting Information, table 1). Two authors (KM, DS) screened all titles and abstracts and excluded irrelevant publications. Two authors (KM, DS) independently evaluated the full text of potentially eligible articles. Disagreements were resolved by discussion or by consulting a third reviewer (MS).

We included peer‐reviewed publications in our systematic review if they reported data for patients aged 18 years or more who underwent elective surgery; a pre‐operation measure of serious mental illness; post‐operative outcomes, as defined below; and a measure of association between having a serious mental illness before the operation and post‐operative outcomes, or data that permitted assessment of such an association. Studies solely concerned with delirium, children, emergency surgery, case reports, case series with fewer than ten patients, and qualitative studies were excluded.16

Pain was defined as any measure of pain in hospital or within 30 days of hospital discharge.

Meta‐analyses were conducted in Comprehensive Meta‐Analysis, version 3 (Biostat). Odds ratios (ORs) or mean differences (MDs) were calculated (with 95% confidence intervals [CIs]) in random effects models to provide pooled effect estimates for each analysis. When meta‐analysis was not possible because of data heterogeneity or because the results could not be merged as “any serious mental illness”, the results of the individual studies were described qualitatively.

Characteristics of the included studies

Overall risk of bias was low in eighteen studies.17,36,37,38,40,41,42 Five studies were assessed as having a moderate risk of bias because of problems with study participation, outcome measurements, confounding, or poor statistical analysis.18,19,23,28,35 Three studies were assessed as having a high risk of overall bias because of problems with study attrition, prognostic measures, confounding, or statistical analysis.27,34,39 Risk of study confounding was low in 20 studies that measured and adjusted for key confounders, such as age, sex, ethnic background, and comorbid medical conditions that can affect surgical outcomes17,18,36,37,38,40,41,42 (Supporting Information, table 3).

The association between having a serious mental illness and hospital length of stay was investigated in 18 studies,18,36,37,38,39,40,41 ten of which were included in our meta‐analysis (Box 2). The pooled results of these ten studies (5 385 970 patients) indicated that the mean length of hospital stay was significantly greater for patients with any serious mental illness than for patients without such illnesses (pooled effect: MD, 2.6 days; 95% CI, 0.8–4.4 days).18,39 Restricting analysis to studies that included an objective measure for determining the serious mental illness diagnosis18,19,25,26,28,29,32 yielded a similar result (pooled effect: MD, 0.8 days; 95% CI, 0.5–1.2 days)

One study (44 835 patients) found that the odds of post‐operative admission to intensive care were significantly higher for patients with schizophrenia than for those without a serious mental illness (OR, 1.65; 95% CI, 1.54–1.76).29 Another study (180 patients) found no significant difference in the length of intensive care stay for patients with and without anxiety38 (Supporting Information, table 4).

Another study (75 patients) found that post‐operative pain scores for surgical patients with schizophrenia were significantly lower than for a control group two, five and 24 hours and five days after their operations27 (Supporting Information, table 4).

The pooled results of five studies that investigated the association between any serious mental illness and hospital re‐admission within 30 days of discharge18,22,28,30,42 indicated that patients with any serious mental illness were almost twice as likely to be re‐admitted to hospital within 30 days as other patients (OR, 1.91; 95% CI, 1.17–3.10); the difference for patients with depression was not statistically significant18,22 (Supporting Information, figure 6).

Our findings suggest opportunities for optimising surgical outcomes for patients with serious mental illnesses, including testing a range of interventions, such as pre‐surgery screening tools,46 collaborative care models that enhance communication between and linkage of surgical and mental health teams,47 and improving awareness in inpatient clinical teams of the needs of patients with serious mental illness.48 Associations between post‐operative surgical outcomes and specific serious mental illness diagnoses should also be investigated, including substance misuse and eating disorder diagnoses, data for which are not currently available.

Strengths and limitations of our review

Strengths included our prospective registration of the protocol of our review with the PROSPERO registry, the very large overall sample size (more than 6 million patients), the number and quality of the included studies (risk of bias deemed to be low in 18 of 26 included publications), and our separate analysis of the 19 studies that employed objective measures of serious mental illness and thereby included more comparable data.

Limitations included the heterogeneity of patients grouped according to both surgical specialty and mental illness diagnosis, which did not allow analysis by clinical severity of illness. This problem is related to the broader lack of recognition of differences in the presentation of each mental disorder, and should be taken into consideration when interpreting our results. Although subgroup analyses were performed when possible, the method for determining serious mental illness diagnoses may have influenced our results. Of the 19 studies employing objective measures, ICD codes were retrospectively reviewed in twelve, an approach that underestimates the prevalence of chronic medical conditions, including serious mental illnesses.49 Indeed, ICD codes for mental disorders are only allocated to patients who require treatment or resources related to these disorders during their admission; that is, patients with active illness but not those with stable mental health. Six different tools were used in the seven studies that employed subjective measures for determining diagnoses; although validated for this purpose, each has limitations, including the fact that they capture symptoms but not necessarily clinically defined disorders.36

Our systematic review and meta‐analysis indicate that having a serious mental illness is associated with higher rates of post‐operative complications, longer stays in hospital, higher inpatient costs, and a higher rate of re‐admission within 30 days of discharge, but not with higher in‐hospital or 30‐day mortality. 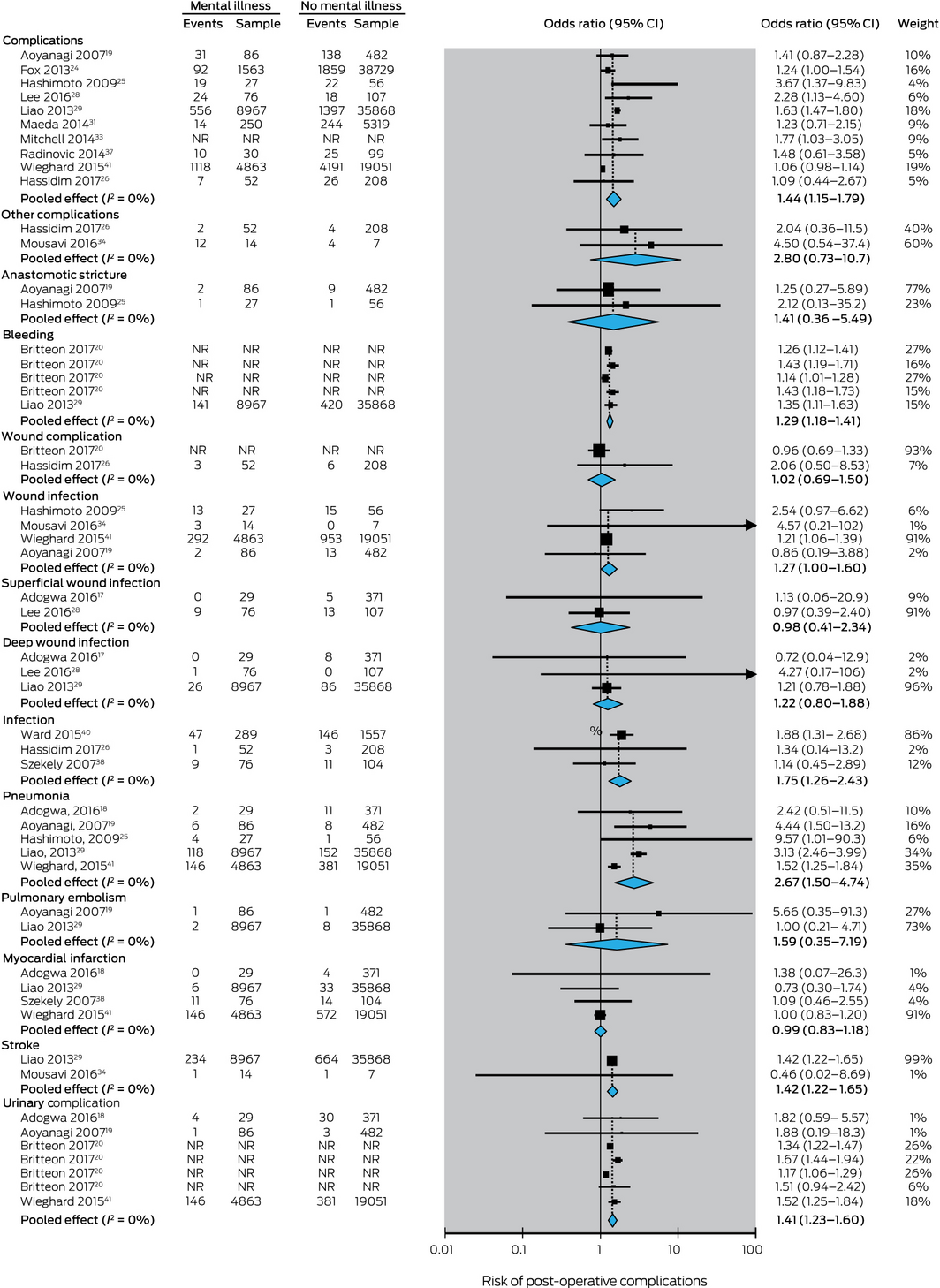 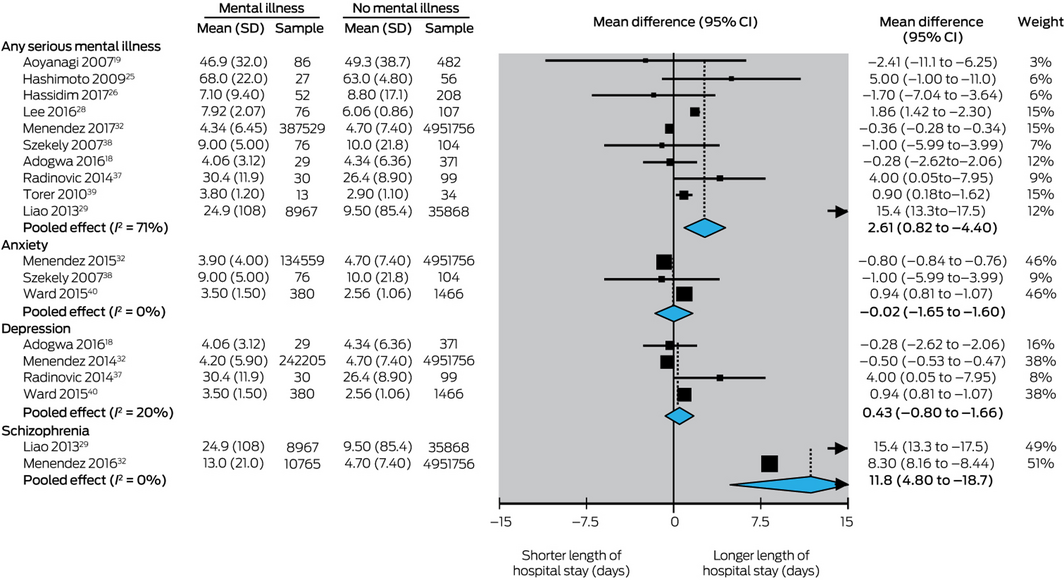