Objectives: To determine the age‐standardised prevalence of inflammatory bowel disease (IBD) in a metropolitan area of Sydney, with a focus on its prevalence among older people.

Design, setting: Population‐based epidemiological study of people with IBD in the City of Canada Bay, a local government area in the inner west of Sydney, during 1 March 2016 – 10 November 2016.

Participants: Patients diagnosed with confirmed IBD according to the Copenhagen or revised Porto criteria.

Conclusions: We found that the prevalence of confirmed IBD in a metropolitan sample was highest among older people. Challenges for managing older patients with IBD include higher rates of comorbid conditions, polypharmacy, and cognitive decline, and the immunosuppressive nature of standard therapies for IBD.

The known: The prevalence of inflammatory bowel disease (IBD) is increasing worldwide. However, recent age‐standardised prevalence data for Australia are not available.

The implications: Given the higher prevalence of IBD among older people in metropolitan Sydney, and their higher risk of infections, doctors should consider replacing systemic immunosuppressive therapies with alternatives when possible.

The worldwide burden of inflammatory bowel disease (IBD), which includes Crohn disease and ulcerative colitis, has increased markedly over the past sixty years,1 partly because IBD is incurable but rarely fatal.2 Its prevalence is greatest (but stable) in western Europe and North America,1 but its incidence has risen over the past two decades in more recently industrialised countries in Asia, South America, and Africa.3,4

The burden associated with IBD in Australia is high; it was estimated to have incurred more than $2.7 billion in costs in 2012.5,6 Earlier epidemiological studies in Victoria (2010–11)5 and Tasmania (2013–14)7 included mixed urban and rural populations; in a multi‐nation Asia–Pacific study, epidemiological variations were associated with population density and proximity to metropolitan areas.8 Young people with IBD may move to cities for education and employment, reducing the apparent prevalence of IBD in rural areas.

It was recently reported that IBD prevalence rates in Lothian (Scotland) were very high among people aged 60–79 years (1178 per 100 000) or 80 years or more (1042 per 100 000), and they are projected to rise further by 2028.9 The use of immunosuppressive therapies to treat IBD in these age groups is problematic, as opportunistic infections, sepsis, comorbid conditions, and malignancy are more frequent in older patients.

We therefore examined age‐specific prevalence rates of IBD in a defined metropolitan area of Australia, focusing on its prevalence in older people.

We assessed the prevalence of IBD in the City of Canada Bay, a local government area in the inner west of Sydney, with a population of 88 015 at the time of data collection (Box 1).10 Concord Hospital, a centrally located public hospital with an established IBD clinic, provides free health care for patients with IBD.

Two authors (AP, JL) collected patient data in standardised forms. Given the heterogeneity of the data sources, various search methods were employed to identify patients, including searches for keywords (eg, Crohn, colitis, IBD), pharmaceutical prescriptions, and ICD‐10 codes. Demographic data (patient’s initials, sex, age, postcode) were collected to check for duplication and for analyses of point prevalence. “Older person” was defined as someone aged 65 years or more. Clinical data (IBD subtype, age at diagnosis) were obtained from patient medical records. The most recently updated IBD phenotype details (according to the Montreal classification11) were also collected.

We included only patients with confirmed IBD according to the internationally recognised Copenhagen12,13 (Supporting Information, table 1) and revised Porto criteria14 for clinical, endoscopic, radiological and histological findings. Each included IBD case was independently verified by two of the authors (AP, JL).

Crude IBD prevalence rates were calculated by dividing the number of confirmed cases by the City of Canada Bay resident population; rates were separately calculated for Crohn disease, ulcerative colitis, and IBD unclassified (IBDU). Rates, with 95% confidence intervals (CIs), were expressed per 100 000 population. Direct age standardisation was based on the World Health Organization standard population,15 permitting comparisons with overseas data; 95% CIs were calculated with the Keyfitz formula.16 Statistical analysis was performed in the Statistical Package for the Social Sciences (SPSS) Statistics 23.

Complete phenotypic details were available for 163 of 164 cases of Crohn disease (99.4%) and 159 of 160 cases of ulcerative colitis (99.4%). Most patients with Crohn disease were diagnosed when aged 17–40 years and had disease affecting both the ileum and colon (68 of 164 patients, 41%). Disease was usually inflammatory but non‐stricturing and non‐penetrating (98 patients, 60%); 37 patients (23%) were classified as having peri‐anal disease. The most frequent disease extent for ulcerative colitis was left‐sided colitis (63 of 160 patients, 39%) (Box 3).

IBD prevalence increased with age (Box 5). The prevalence of Crohn disease peaked in the 50–54‐year age group, that of ulcerative colitis in the 35–39‐year and the 85 years or more age groups (Box 6). The age distribution was similar for both sexes (Box 7).

Of the 364 cases, 175 (48%) were identified in a single data source, including 139 patients of a private gastroenterologist (Supporting Information, table 2).

We have reported the first population‐based IBD prevalence study in New South Wales, and the first IBD prevalence study in Australia restricted to a metropolitan area. Our population‐based methodology allows direct comparison with other national and international studies (Supporting Information, table 3). We found the highest age‐standardised rates of IBD (348 cases per 100 000 population), Crohn disease (166 per 100 000 population) and ulcerative colitis (148 per 100 000 population) reported by any study in Australia or New Zealand.5,7,17 The prevalence rate of Crohn disease was higher than that of ulcerative colitis, as also found by earlier Australian, New Zealand and Canadian studies,5,7,17,18,19 but not by older studies from Scandinavia and North America.20,21,22 These differences are consistent with observations over the past fifty years that the incidence of ulcerative colitis had increased but then plateaued, while that of Crohn disease has continued to increase.23

Our prevalence rates are slightly higher than reported by earlier Australian studies for mixed urban and rural populations.5,7 The difference is probably attributable to a time‐cohort effect (cumulative increase in number of IBD cases over time), but our higher rate may be related to the urban nature of our sample. A systematic review and meta‐analysis found that the risks of Crohn disease (incidence rate ratio [IRR], 1.42; 95% CI, 1.26–1.60) and ulcerative colitis (IRR, 1.17; 95% CI, 1.03–1.32) were higher for urban than rural residents.22 Factors that may contribute to greater risk include higher rates of smoking (for Crohn disease), better hygiene and sanitation, antibiotic use, and air pollution in urban areas, as well as migration of young people from rural to metropolitan regions for education and employment. Further exploration of risk factors associated with urban living that may contribute to the pathogenesis of IBD is required.24

A Canadian study found that the prevalence of ulcerative colitis was highest among people aged 40–49 years, but was similar for older age groups.19 Findings from other studies have been heterogeneous; some North American studies reported, like us, a steady increase in IBD prevalence with age, particularly of ulcerative colitis.18,22 As ulcerative colitis is more common among non‐smokers, these patients may have lower mortality, as they are healthier than the age‐matched general population, as previously reported.25

The rising prevalence of IBD with age is important for management strategies, including the use of immunosuppressive medications that exacerbate the risks of infections and malignancies in older people.26 Accurate prevalence rates allow health care administrators to efficiently plan for investigating IBD and managing patients. Our findings highlight the importance of safer therapies, appropriate cancer screening, and taking comorbid conditions into account when managing older people with IBD.27 Systemic immunosuppressive therapies should be de‐escalated when possible, and newer biological agents less likely to lead to sepsis, such as ustekinumab and vedolizumab, should be considered.26

The demographic features of the City of Canada Bay are similar to those of Greater Sydney, NSW, and Australia (Supporting Information, table 4), except for higher proportions than the Australian population of people with Chinese (17% v 5.2%) or Italian ancestry (15% v 4.3%). Extrapolating the IBD prevalence rate in Canada Bay would suggest that 16 797 people in Greater Sydney, 26 046 in NSW, and 81 485 in Australia live with IBD. By way of comparison, it was estimated in 2013 that the number of people in Australia living with IBD in 2016 would lie in the range 72 805–89 502.6

We fully characterised all included patients to confirm diagnoses according to the Copenhagen and revised Porto criteria. Duplication of cases was avoided by uniquely identifying each case. Phenotypic details were available for all but two patients, perhaps explaining the larger proportion of IBDU patients than in other studies. In contrast, detailed information on disease location in another Australian study was available for only 350 of 579 patients with prevalent Crohn disease (60%).5

Limitations include the fact that we undertook a retrospective review of medical records, and we may have missed patients who sought gastroenterology care outside the City of Canada Bay. Mild cases of IBD may be managed by family physicians, but they do not usually manage IBD without involving a specialist gastroenterologist.28 We used different search methods to reduce selection bias, including searches of paper medical records and for keywords in electronic medical records. Further, we selected an area with a small population compared with some other studies. However, the smaller population facilitated full case ascertainment in a metropolitan area, an approach not previously undertaken in Australia. The ethnic background, socio‐economic status, and urban nature of our population may affect the generalisability of our findings to Australia as a whole. Finally, undiagnosed IBD is possible, as the median time from symptom onset to diagnosis is 4 months for ulcerative colitis and 9 months for Crohn disease.29

In the first IBD prevalence study in New South Wales, the most populous state in Australia, we found that its prevalence was high in the City of Canada Bay, particularly among people aged 65 years or more. The high age‐specific IBD prevalence in the middle‐aged and older people has important implications for treatment decisions. 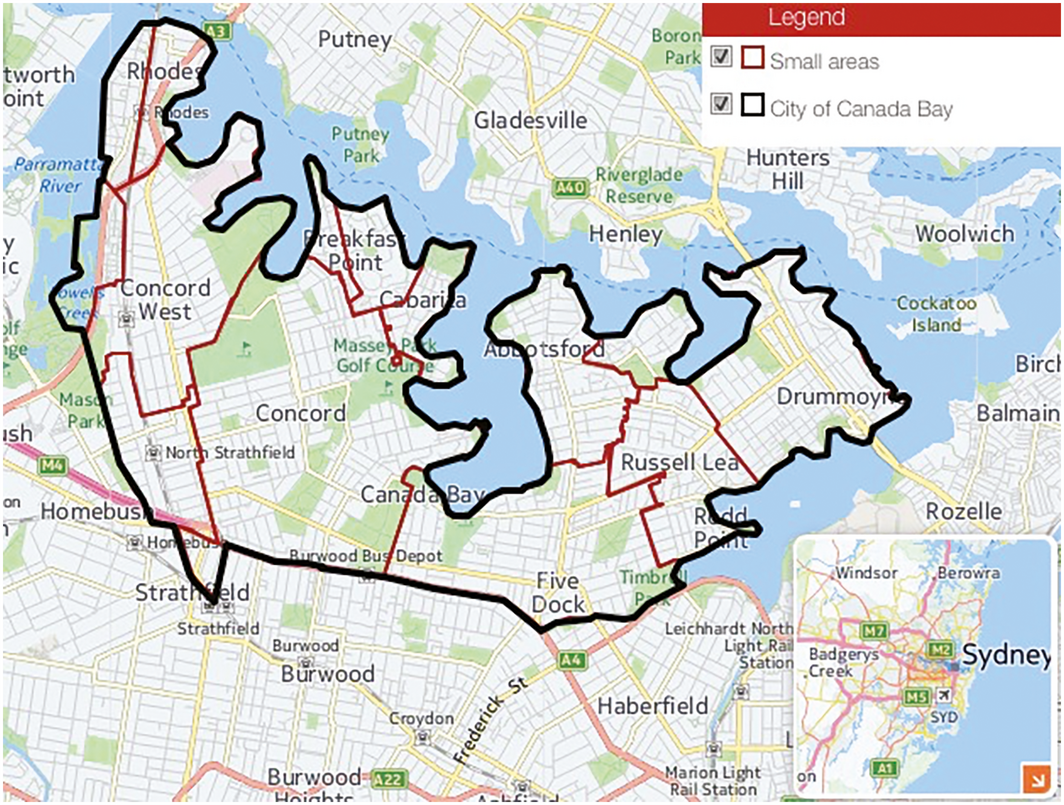 Box 3 – Inflammatory bowel disease phenotypes of patients in the City of Canada Bay, according to the Montreal classification11

Box 6 – Age‐specific prevalence of inflammatory bowel disease in the City of Canada Bay, by type and age 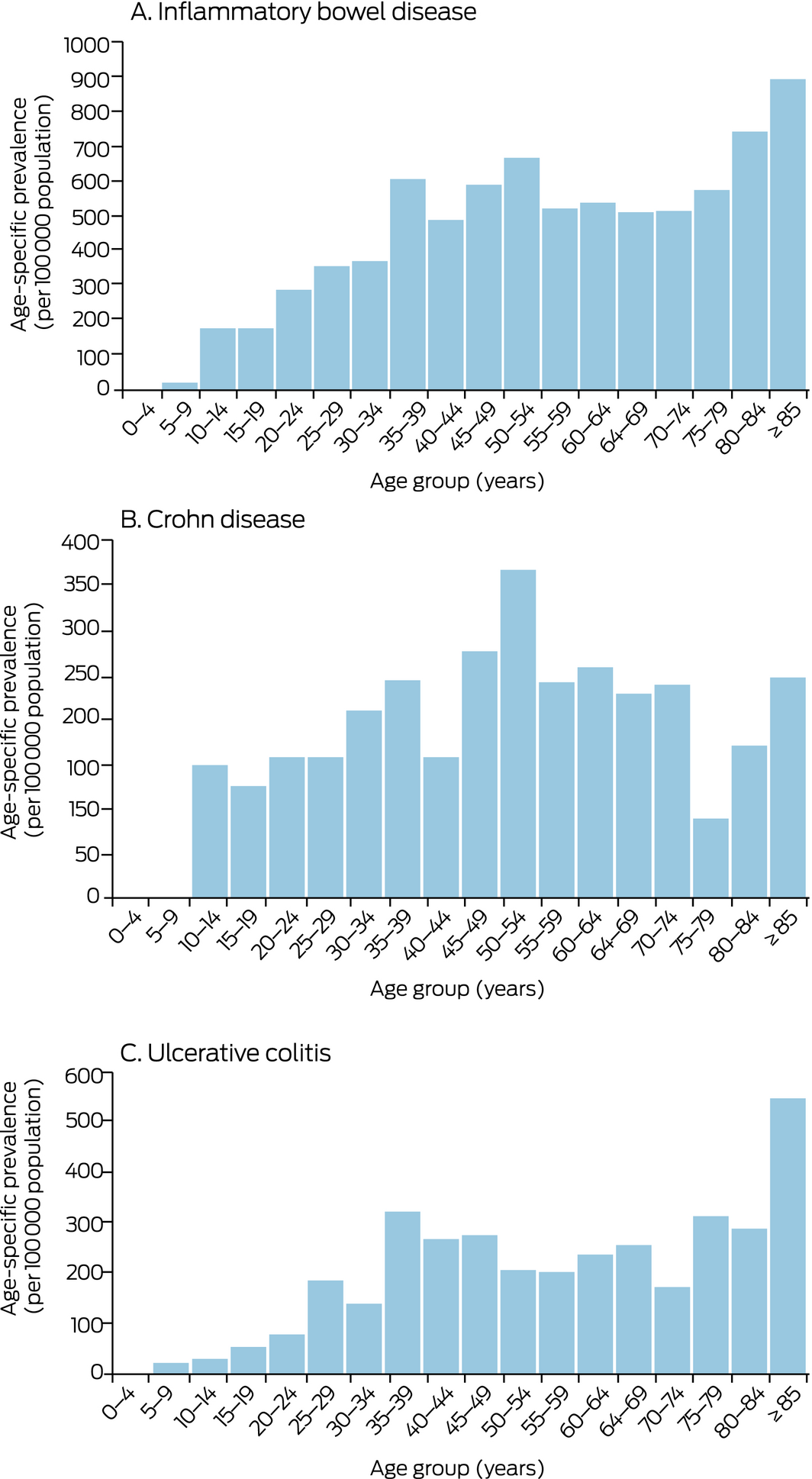 Box 7 – Age‐specific prevalence of inflammatory bowel disease in the City of Canada Bay, by sex 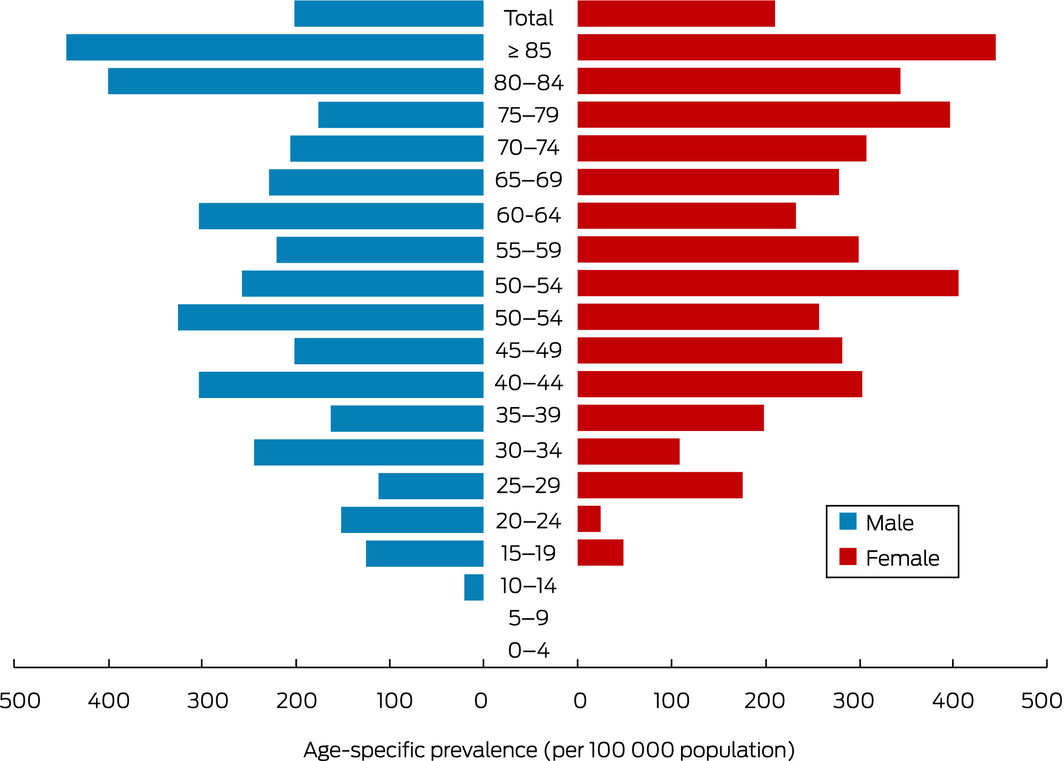 Box 8 – Age at diagnosis for people in the City of Canada Bay with Crohn disease or ulcerative colitis, by sex 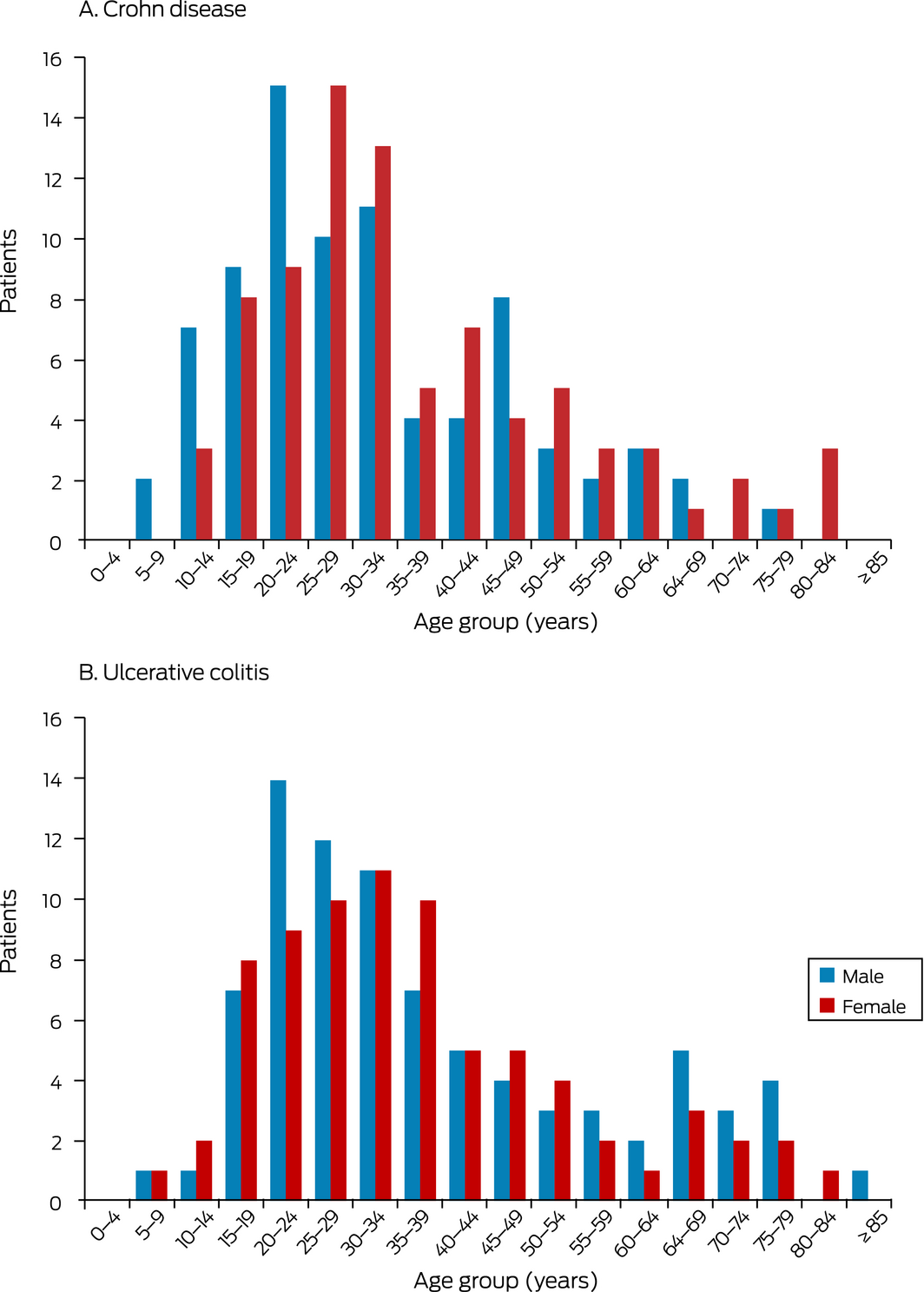 Viraj Kariyawasam undertakes consultancy work for Janssen‐Cilag and has received grants from Takeda, Ferring, Abbvie, and Shire. Thomas Borody has a pecuniary interest in the Centre for Digestive Diseases and sits on advisory boards for Redhill, Crestovo, and Finch Therapeutics. Crispin Corte has received unrestricted research grants from Shire and Ferring, and has received speakers’ honoraria from Abbvie, Ferring, Janssen, Takeda, and Shire. Rupert Leong has served on advisory boards for AbbVie, Aspen, Celgene, Ferring, Janssen, and Takeda, and has received unrestricted research support from the National Health and Medical Research Council, Shire, and Janssen, and speakers’ honoraria from Emerge Health.