Changes in the proportions of authors in Australian medical journals who were women, 2005–2018

In June 2015, 41% of Australian medical specialists were women,1 but only 28% of those in senior or leadership positions.2 Academic research is important for obtaining tenure and promotion in medicine. First authorship on publications is typically granted to junior authors and last authorship to directing senior authors. The proportion of women among first authors in six prominent American medical journals increased from 5.9% in 1970 to 29.3% in 2004, and for last authorship from 3.7% to 19.3%.3 However, a 2016 study found that the proportion of authors who were women in high impact medical journals had plateaued or declined since 2009.4 Examining Australian patterns of authorship could help identify barriers to the academic advancement of women in medicine.

We identified in PubMed all journal articles published during 2005–2018 by the eight journals associated with peak bodies of Australian medical practitioners, and used the validated genderize.R tool to determine the probable gender of authors’ first names.5 We used Poisson regression to analyse first and last authorship (male = 0, female = 1) by year; we report the statistical significance of the deviation of the regression slope (B‐value) from zero. The relationship between number of authors and gender were assessed by linear regression, including an interaction term between gender and time. Formal ethics approval was not required for this analysis of publicly available data.

Our study did not distinguish between research, review, and other journal article types. While our findings may reflect overall involvement of women in research, they do not specifically define gender proportions among leaders of high impact academic research programs.

Box – Proportions of women as first and last authors of articles in selected Australian medical journals, 2005–2018* 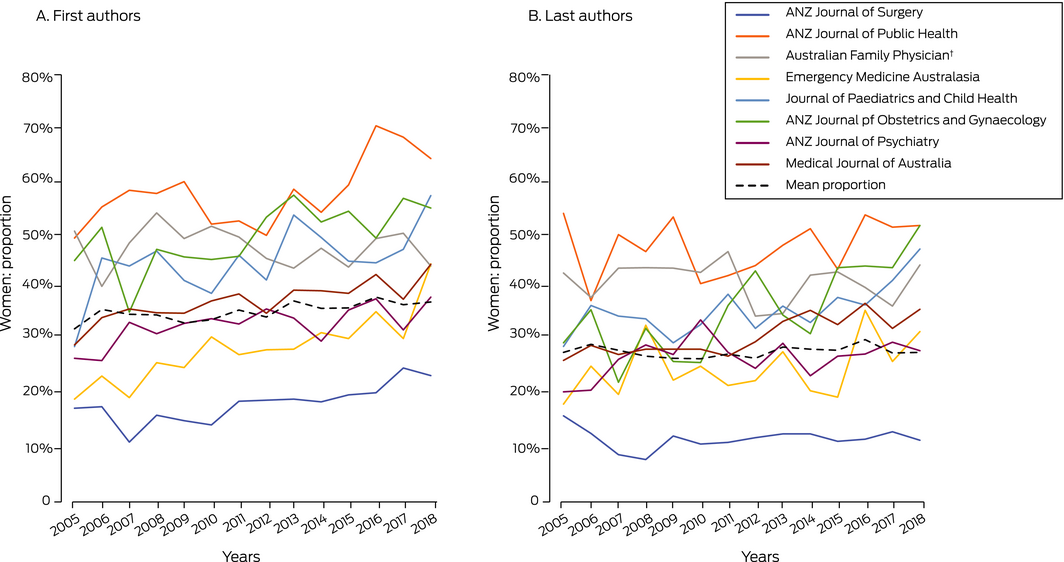 * The raw data are included in the online Supporting Information, tables 4 and 5. † From 2018: the Australian Journal of General Practice.