The spectrum of recovery for people infected with severe acute respiratory syndrome coronavirus 2 (SARS‐CoV‐2) remains uncertain.1,2,3,4 The ADAPT study is a prospective cohort study that follows up all adults diagnosed with coronavirus disease 2019 (COVID‐19) at St Vincent’s Hospital, Sydney. Our goal is to characterise the effects of infection during the 12 months after diagnosis, by initial severity of COVID‐19. Our specific aims were to determine the prevalence and nature of persistent symptoms; to evaluate lung function, health‐related quality of life, neurocognitive and olfactory abnormalities during the recovery period; and to characterise the longitudinal immune response to infection.

In this article, we report the results of assessments performed up to four months after diagnosis. All adults with SARS‐CoV‐2 infections confirmed by polymerase chain reaction (PCR) at St Vincent’s Hospital testing clinics and who could be contacted were invited to participate. Participants were prospectively assessed according to a pre‐defined schedule. The study was approved by the St Vincent’s Hospital Human Research Ethics Committee (reference, 2020/ETH00964); baseline visits commenced as soon as this approval was obtained.

Between 14 May and 21 July 2020, 78 of 167 eligible patients were enrolled (47%), with diagnosis dates between 11 March and 21 April 2020. Sixty‐nine patients had been managed in the community (30 mild, 39 moderate cases; Supporting Information, figure 1, table 1) and nine in hospital (two admitted to intensive care with acute respiratory distress syndrome). Their mean age was 47 years (standard deviation, 16 years); 27 were women, 65 had European ethnic backgrounds, and 39 had infections acquired overseas (Supporting Information, table 2). The most frequently reported comorbid conditions were hypertension (14 patients) and asthma (nine); 37 patients had no comorbidity. The most frequently reported initial COVID‐19 symptoms were fatigue (62 patients), cough (50), and headache (44). At a median of 69 days after diagnosis (interquartile range [IQR], 64–83 days), 31 patients (seven hospitalised, 24 community‐managed) had persistent symptoms, including fatigue (17 patients), shortness of breath (15), and chest tightness (14) (Box 1).

Neurocognitive and olfactory function were tested by trained examiners with the computerised CogState Cognitive Test Battery (cogstate.com) and the NIH Toolbox Odor Identification test.5 Cognitive impairment was evident in eight patients, in four of whom olfaction was also impaired. Five patients had mild and three had moderate cognitive impairment; psychomotor speed was the most frequent impairment. Impaired olfaction was evident in 18 patients, including four with severe anosmia. The Depression in the Medically Ill questionnaire (DMI‐10)6 was administered to 76 patients; 16 (21%) reported symptoms consistent with depression.

The generalisability of the findings of our single‐site study may be limited, its sample largely drawn from the highly educated, predominantly white eastern suburbs of Sydney with low rates of chronic comorbidity. Further follow‐up will provide data on the longer term trajectory of recovery after COVID‐19 and provide insights into the mechanisms of systemic inflammation after SARS‐CoV‐2 infection and its immunological correlates. 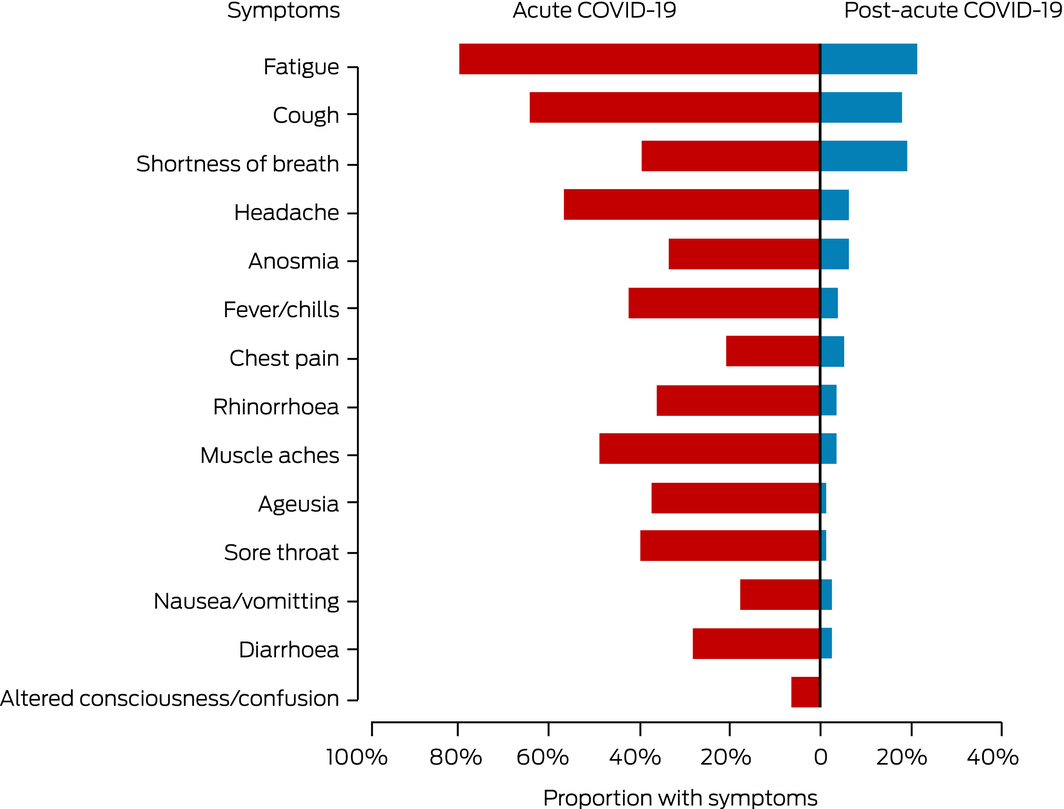