Participants: Adults (18 years or older) with IBD receiving maintenance originator infliximab (Remicade) who had been in steroid‐free clinical remission for at least 12 weeks.

The implications: Our findings should provide assurance to clinicians and patients regarding the safety and clinical effectiveness of biosimilar infliximab, including after non‐medical switching from originator to biosimilar preparations.

Biologic (monoclonal) agents such as infliximab are clinically effective for a range of chronic disease indications, including moderate to severe inflammatory bowel disease (IBD).1,2 However, these medications are expensive, accounting for as much as 64% of IBD‐related health care costs.3 During 2015–16, expenditure for biologic medications in Australia was estimated to total at least $2.3 billion, and cost reduction strategies are needed to ensure the sustainability of biologic therapies for Australian patients.4

One approach to reducing pharmaceutical expenditure is using less expensive biosimilar medicines.4 The action of a biosimilar medication in vitro is very similar to that of the reference product, and there should be no clinically meaningful differences in potency, purity, or safety.5,6,7 Moreover, biosimilar products must meet rigorous standards of safety and efficacy before being approved for clinical use.6,7 Several studies have found that infliximab biosimilars are safe and clinically effective for several indications, including IBD, in infliximab‐naïve patients.5,8,9,10,11 However, it is less clear whether non‐medical switching (ie, switching that is not clinically motivated) of patients with clinically stable IBD from originator infliximab to a biosimilar achieves comparable clinical outcomes.5,12,13

The NOR‐SWITCH randomised controlled trial in Norway evaluated the safety and clinical efficacy of switching patients with inflammatory diseases from originator infliximab to a biosimilar.12 Clinical outcomes were less favourable for patients in the IBD subgroup switched to the infliximab biosimilar (CT‐P13), but the study was not powered to statistically evaluate outcomes for individual disease indications. Subsequent studies that have evaluated the safety and effectiveness of non‐medical switching of patients with IBD have been observational in nature and did not include control (ie, non‐switch) arms.5,14

The Switching Australian patients with Moderate to severe inflammatory bowel diseasE from originator to biosimilar infliximab (SAME) study was a prospective, open label, multi‐centre, parallel cohort, non‐inferiority study of adults (18 years or more old) with moderate to severe IBD who either continued maintenance originator infliximab treatment or were switched to biosimilar CT‐P13 (Inflectra). All patients with a diagnosis of Crohn disease or ulcerative colitis based on standardised clinical, endoscopic, histologic, and radiologic criteria who had been in stable steroid‐free clinical or biochemical remission for at least 12 weeks at enrolment were eligible for participation. Patients receiving limited duration courses of infliximab, with a stoma, or awaiting surgery were excluded.

Our observational study was undertaken from 1 May 2017 to 31 October 2019. From the perspective of clinical practice and pharmacovigilance, it was deemed more appropriate to use a single brand of infliximab at each participating hospital; that is, for the clinicians at each hospital to opt for participation in either the control or switch arms of the study. Patients in four public hospitals were switched from originator infliximab (Remicade) to CT‐P13, while patients in three hospitals (one public, two private) continued to receive originator infliximab (Box 1). Each patient was followed for 48 weeks.

Decision to switch patients to the infliximab biosimilar, CT‐P13

The decision to switch patients with IBD from originator infliximab to CT‐P13 was determined at each participating hospital, independently of this study, according to collaborative discussions between IBD clinicians and the drug and therapeutics committee of the hospital. Reasons for switching included potential cost savings to the hospital and the capacity of a hospital to undertake a managed switch program. Patients identified by their clinicians as clinically suitable for non‐medical switching were advised by mail of the intention to switch them from originator infliximab to CT‐P13; the letter also included information about the clinical similarity, safety, and effectiveness of the biosimilar product. In addition, each patient was phoned by a member of their IBD team to confirm receipt of the letter, to answer their questions, and to confirm whether they had agreed to switching to CT‐P13. Patients could choose to continue treatment with originator infliximab if they did not wish to switch.

Data on baseline demographic, disease, and medication characteristics were recorded, with information on the clinical assessment of IBD disease activity, adverse events, and commencement of corticosteroid therapy captured at the time of infusion and at outpatient follow‐up. Blood was collected immediately prior to infliximab administration at baseline and prior to every second infusion during follow‐up for measuring infliximab trough and antibody levels, and C‐reactive protein (CRP) and albumin concentrations.

Plasma infliximab was assayed with Promonitor‐IFX ELISA kits (Grifols); levels below 3.0 μg/mL were deemed sub‐therapeutic. Anti‐infliximab antibodies — measured if infliximab itself was undetectable — were reported qualitatively (detectable at a level of 10.0 ng/mL). Immunomodulator co‐therapy referred to concomitant use of a thiopurine or methotrexate with maintenance infliximab therapy.

Assuming no difference between the control and switch arms in the proportions of people reaching the primary outcome, we estimated that 240 patients (120 per group) were required to ensure, with 90% confidence, that the upper limit of the 95% confidence interval (two‐sided) would exclude a difference in favour of originator infliximab of more than 15 percentage points, the non‐inferiority margin applied in the NOR‐SWITCH study.12

The primary outcome was assessed in an intention to treat analysis; patients who discontinued therapy because of medication intolerance, an adverse event, or non‐compliance were classified as having reached the primary endpoint of disease worsening. The primary outcome was assessed in a linear probability model in a generalised estimating equations framework, adjusted for disease duration, infliximab treatment duration, immunomodulator co‐therapy, baseline dose escalation, and clustering of intervention in centres, and expressed as adjusted hazard ratios (HRs) and risk differences, each with 95% confidence intervals (CIs).

Three‐hundred and forty‐five patients with IBD (including 232 with Crohn disease) were enrolled; 204 (59%) in four hospitals were switched to CT‐P13, 141 (41%) in the three other hospitals continued to receive originator infliximab. Two patients deemed clinically suitable for switching elected to continue originator infliximab, and were excluded from the study (Box 1). The baseline patient, disease, and treatment characteristics of the two groups were similar (Box 2).

The results of the SAME study indicate that non‐medical switching of Australian patients with IBD from originator to biosimilar infliximab is a safe and clinically non‐inferior alternative to continuing treatment with originator infliximab.

Our findings are consistent with overseas reports that switching from originator to biosimilar infliximab is safe and not accompanied by increased numbers of adverse drug events or infusion reactions.17,18,19,20 Severe adverse events requiring discontinuation of infliximab therapy were rare in both groups in our study, and could not be linked with switching from originator to biosimilar infliximab. Moreover, infliximab trough and antibody levels were consistently similar for the two groups across the study, providing assurance that the pharmacokinetics of originator and biosimilar infliximab are similar. The large study cohort also facilitated separate comparison of outcomes for people with Crohn disease or ulcerative colitis. Outcomes were also similar for the control and switch groups (Box 3), although our study was not adequately powered to draw definitive statistical conclusions about IBD subgroups.

The SAME study is one of the largest controlled observational studies to evaluate the safety and clinical effects of non‐medical switching of patients with IBD. Our study also assures Australian health professionals and patients that switching from originator to biosimilar infliximab is safe and non‐inferior to continuing treatment with originator infliximab. Moreover, given the relatively low rates of clinical disease worsening and of adverse events in people switched to CT‐P13, a marked nocebo effect, as suggested by the authors of another investigation of infliximab switching,21 was not apparent. Further, infliximab drug and antibody testing at multiple time points over 48 weeks did not detect any changes associated with switching to biosimilar infliximab.

Further, our findings have significant health economic implications. At study commencement (May 2017), the Pharmaceutical Benefits Scheme (PBS) reimbursed $574.85 per 100 mg infliximab vial; at study conclusion (October 2019), the rate was $320.71 per vial.22 On the basis of six PBS‐funded 8‐weekly infliximab infusions over 48 weeks per patient, the estimated annualised cost to the PBS for the entire study group (total of 1547 vials) in May 2017 was $5.34 million, and $2.98 million in October 2019. That is, the estimated annual cost to the PBS was $2.36 million lower in October 2019 (44%), or $6837 less per patient‐year of infliximab therapy. This cost saving, independent of whether originator or biosimilar infliximab or CT‐P13 is used for therapy, was the result of increased market competition following the introduction of biosimilar infliximab in Australia for the treatment of IBD.

First, all patients who switched from originator to biosimilar infliximab were treated in public tertiary IBD centres, while 64 of 141 patients in the control group (45%) were infused in private hospitals. Although we adjusted our analyses for patient, disease, and treatment characteristics, as well as for clustering by site, unmeasured demographic differences between the control and switch groups were possible. Second, we evaluated the effect of switching in patients in steroid‐free clinical remission, and our findings may not be generalisable to patients with clinically active disease. Third, while the pre‐defined non‐inferiority margin of 15 percentage points was taken from the NOR‐SWITCH study,12 it may be too wide for establishing genuine non‐inferiority. Fourth, although rates of adverse events leading to discontinuation of infliximab treatment were similar to those in the NOR‐SWITCH study in both the switch and control groups (3–4%), the rates of non‐serious adverse events in our study may have been influenced by differences between hospitals in their reporting and documentation. Finally, we did not evaluate the safety of multiple switches between originator and biosimilar infliximab.

The results of the SAME study indicate that it is safe to switch clinically stable patients with moderate to severe IBD from originator to biosimilar infliximab. The introduction of the infliximab biosimilar CT‐P13 (Inflectra) has also led to a considerable reduction in the PBS‐listed price for infliximab, resulting in millions of dollars in estimated cost savings for the PBS. It is therefore anticipated that the SAME study will reassure both health professionals and patients that biosimilar infliximab is safe, clinically effective, and economical.

Box 1 – Flow of patients through the study: clinically stable patients with inflammatory bowel disease treated with originator infliximab (Remicade) or switched to an infliximab biosimilar (CT‐P13, Inflectra) for 48 weeks 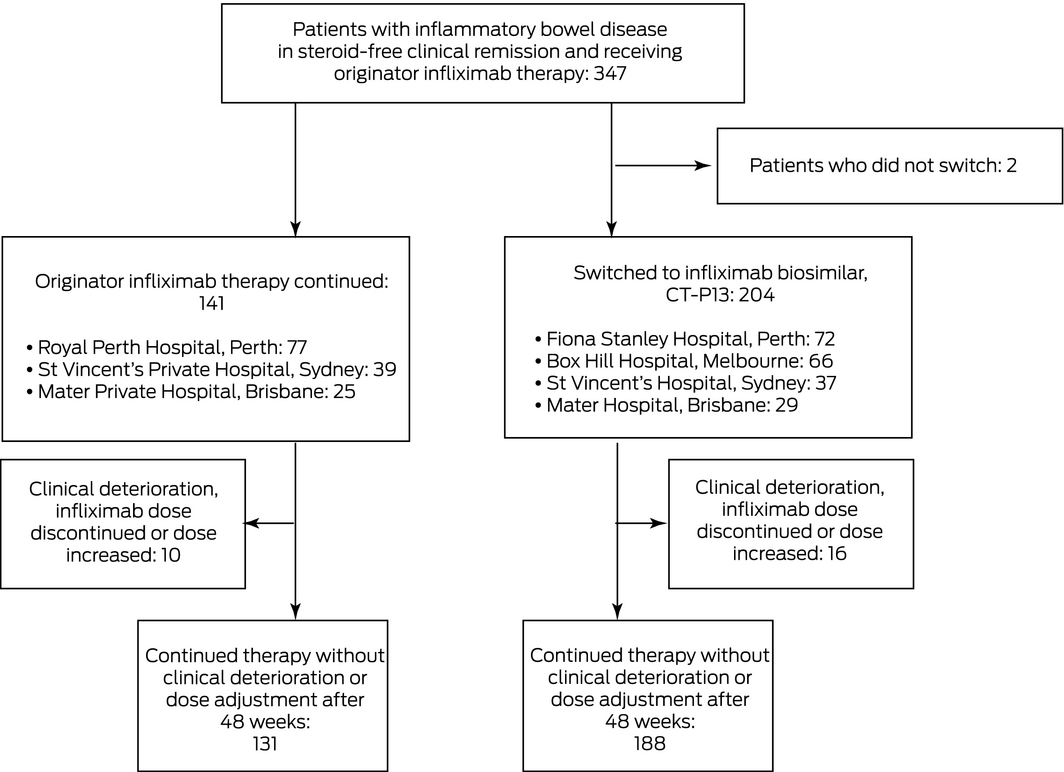 Pfizer provided an unrestricted grant to fund testing of infliximab drug and antibody levels. Pfizer had no role in study design, analysis, or reporting of this data.