Objective: To assess the demographic, social, and clinical characteristics of young Australians who die by suicide.

Main outcome measures: Demographic, social, and clinical characteristics of young people who died by suicide; circumstances of death recorded in the NCIS.

The known: Several demographic, clinical, and social risk factors are associated with suicide by young people, but they have not been investigated on the national scale in Australia.

The new: Among the 3027 young people who died by suicide during 2006–2015, the lifetime burdens of mental health problems (57%), self‐harm (31%), and illicit substance use (28%) were high. Fewer than one‐third were receiving mental health care at the time of their deaths.

The implications: We need to ensure that young people are better engaged with mental health care and receive adequate support for dealing with mental health problems and psychosocial stressors, such as employment and financial difficulties.

The suicide rate increases sharply during adolescence, and is as much as ten times as high for people aged 15–29 years as for children aged 5–14 years.2 Adolescence is also the peak period for the onset of mental health disorders, including depression, anxiety, and substance use disorders.3,4 Social stressors such as parental discord,5 abuse and neglect,5 exposure to suicide,6 and rapid changes in emotional and cognitive development,3 are also associated with suicidal behaviour in adolescents.

In Australia, national and state‐based suicide prevention strategies recognise young people as being at particular risk and in need of specific preventive strategies.7 But information on the demographic, social, and clinical antecedents of suicide by young Australians is limited to studies restricted by geographic location8,9 or suicide method,10,11 or studies that included both young people and adults.12 We therefore analysed national suicide mortality data to identify the demographic, social, and clinical characteristics of young Australians who died by suicide during 2006–2015.

We conducted a retrospective national study of suicide in Australia by people aged 10–24 years during 2006–2015, based upon data from the National Coronial Information System (NCIS). The year 2015 was selected as the study endpoint because more than 90% of intentional self‐harm cases to the end of 2015 had been closed by the time of our analysis.13 Cases were extracted from the NCIS database in April 2017, and we updated our search for closed cases in June 2019.

The NCIS is an online data repository for all external cause deaths in Australia. Individual deaths are recorded as cases comprising a core dataset. Additional information is available as free text documents, including police reports, coroners’ reports, autopsy reports, and post mortem toxicology reports. We included cases in our analysis if the deceased had been aged 10–24 years and died during 1 January 2006 – 31 December 2015, the cause of death was recorded as “intentional self‐harm”, and the case had been closed by the coroner (ie, investigation was complete) (further details: online Supporting Information, part 1.1).

We extracted NCIS core data on age, Indigenous status, method of suicide, location of suicide, and remoteness and geospatial information on the location of death. Population level data from the 2011 Index of Relative Socio‐economic Disadvantage (IRSD) was obtained from the Australian Bureau of Statistics.14 The social and clinical antecedents of suicide were collected from police, coroner, autopsy, and toxicology reports. In cases of discrepancies between information in the police and coroner reports, information in the coroner report was deemed final (Supporting Information, table 1).

We calculated age‐ and sex‐specific suicide rates (number per 100 000 person‐years). Population estimates were extracted from the Australian Bureau of Statistics annual mid‐year estimated resident population of people aged 10–24 years (2006–2015), using TableBuilder.15 For the free text analysis, antecedents of suicide were coded as categorical variables in an Excel spreadsheet (Microsoft). Data were coded as the presence or absence of the relevant characteristic unless otherwise specified (Supporting Information, table 2). Results for each variable are reported as proportions, overall and by sex. All analyses were conducted in R 3.6.0 (R Foundation for Statistical Computing).

Our study was approved by the Justice Human Research Ethics Committee (reference, CF/15/13188).

Demographic characteristics and circumstances of death

Narrative text was unavailable from both the police and coroners’ reports for 338 of 3365 cases (10.0%), including all 240 cases in South Australia (Supporting Information, part 1.2). Consequently, free text reports for the deaths of 3027 young people (90.0%), including separate toxicology reports for 2996 people, were examined for information on the social and clinical antecedents of their deaths.

Illicit substance use was indicated in toxicology, autopsy or coroner reports for 852 of 3027 people (28.1%), and evidence of alcohol consumption near the time of death was noted in 1015 cases (33.5%), including 350 (11.6%) in which the alcohol concentration exceeded 150 mg/dL (the threshold for significant cognitive impairment in adults). Excessive alcohol use or binge drinking was reported for 485 young people (16.0%) (Box 4).

We examined the demographic characteristics, circumstances of death, and social and clinical antecedents of suicide by people aged 10–24 years in Australia during 2006–2015. Three‐quarters of suicides were by boys and young men. In 41% of all cases, the young people who had taken their own lives had diagnosed mental disorders, and a further 16% had histories of possible mental health disorders. In all, 57% of young people had a either a diagnosed or possible mental health disorder, suggesting that the mental health and wellbeing of Australian young people should remain a key target for youth suicide prevention.

Several measures that have shown promise in reducing suicide risk have been discussed in the literature. Evidence‐based early intervention services can reduce suicide risk during treatment,17 and some young people require only short term interventions.18 A recent modelling study found that the youth suicide rate in Australia could be reduced markedly by providing coordinated care after discharge from emergency departments following treatment for self‐harm, and by increasing the capacity of specialist mental health services.19 Moreover, our findings suggest that further investment in drug and alcohol services could be helpful, as one‐third of young people who died by suicide had used illicit substances. Interventions that improve treatment engagement and adherence could also avert as many as one in ten suicide deaths.20 For example, the results of digital delivery of brief contact interventions to people who presented to emergency departments during suicidal crises have been promising,21 and should be further investigated for assisting digitally proficient young people.7

However, despite several government inquiries,7,22,23 there have been no efforts to systematically introduce clinical interventions for this purpose in emergency departments across Australia. Nor have there been coordinated efforts to strengthen service systems (eg, referral pathways) at critical points of entry, such as primary care, and discharge, such as emergency departments.7 Closing such gaps in service provision could assist prevention of youth suicide.

More than one‐third of young people who died by suicide resided in disadvantaged regions, confirming that poverty and social disparities are significant determinants of mental health for Australian youth. Further, 39% of young people were not employed or in education or training at the time of death. A major economic contraction has accompanied the coronavirus disease 2019 (COVID‐19) pandemic, and young adults have been particularly affected by job losses and financial stressors.24 Given the association between economic recession and suicide, particularly among young men,25 investments that provide financial security for young people not in education or employment (eg, JobKeeper and JobSeeker) should remain a national priority.

We found that 36% of boys and young men and 39% of girls and young women communicated their distress to family and friends prior to their suicides, either online or directly. A recent psychological autopsy study found that next of kin have significantly greater knowledge of suicide warning signs than health care professionals,26 and could consequently be usefully consulted during clinical decision making. As hanging is the most frequent method of suicide used by young people11 and has a high fatality rate (83%),27 engaging relatives in safety planning and means restriction counselling3 may be particularly useful.

Improving the ability of community members (including other young people) to detect and respond to people at risk of self‐harm in others is critical. A United States study found that providing gatekeeper training to students at 18 schools increased their mental health literacy, their willingness to seek help, and their confidence in talking about suicide.28 An Australian study that included 20 000 construction workers found that levels of mental health and suicide prevention literacy were lower in younger than older men, but that young men were amenable to education, particularly when delivered in the workplace.29

First, coroners’ determinations of intent may have led to our excluding some suicides as accidental deaths or as being of undetermined intent.30 Second, when data were not recorded for a particular variable, we assumed a negative value or that the variable was not relevant to the case. This may be particularly relevant for risk factors such as possible mental health disorders, sexual and gender identity, Indigenous status, and history of abuse and neglect, which may be more reliably ascertainable from self‐reports. Third, our reliance on post mortem toxicology reports for information about psychopharmacological treatment meant that we did not have consistent data on dose, duration of treatment, or safety considerations, all important for the pharmaceutical management of young people at risk of suicide. Finally, we did not include a control group in our study, and the causal inferences that can be drawn from our cross‐sectional study are consequently limited.

In our national study, three‐quarters of the young people who died by suicide were boys or young men, and more than half had diagnosed or possible mental health disorders. More than two‐thirds of young people who died by suicide were not receiving therapy for mental health problems, suggesting that an opportunity for intervention is being missed. The availability and quality of specialist youth mental health services is currently being assessed as part of the Australian Productivity Commission assessment of mental health care services22 and in Victoria by a Royal Commission.23 We hope that these investigations, together with our findings, help improve access to and the quality of care for young people in Australia experiencing suicidal crises. 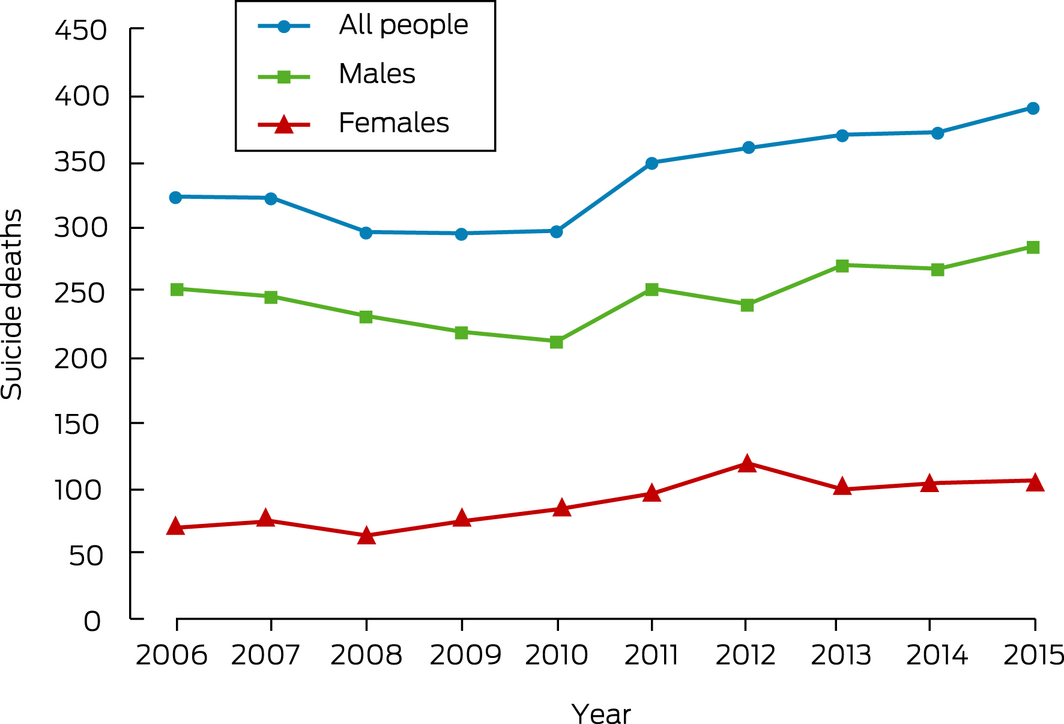 Box 4 – Mental health history and history of self‐harm or suicidal ideation among people aged 10–24 years who died by suicide, Australia, 2006–2015

We thank Sarah Hetrick for her help with grouping the mental health symptoms included in our study. Our study was funded by the William Buckland Foundation and the Future Generations Global Foundation. Jo Robinson and Katrina Witt are supported by National Health and Medical Research Council Career Development Fellowships (1142348, 1177787). Patrick McGorry is supported by a National Health and Medical Research Council Senior Principal Research Fellowship (1155508).