Repeat testing for SARS‐CoV‐2: persistence of viral RNA is common, and clearance is slower in older people

During the coronavirus disease 2019 (COVID‐19) epidemic, the continued presence of viral RNA in the upper airways of infected people has been reported.1 Such persistence does not necessarily signify active infection or that the virus can be transmitted.2 In Queensland, repeat testing for severe acute respiratory syndrome coronavirus 2 (SARS‐CoV‐2) in people with an initial positive test result was undertaken until June 2020, providing an opportunity to explore patterns of test positivity, apparent rates of clearance of viral RNA, and the extent to which each varied by the age and sex of the infected person.

We analysed de‐identified data for people who underwent swab tests for SARS‐CoV‐2 processed in Queensland Health public laboratories between 10 January and 4 June 2020. SARS‐CoV‐2 RNA was detected by polymerase chain reaction (PCR). Testing was initially restricted to people with relevant symptoms who had visited high risk areas (Box 1); from April 2020, anyone with relevant symptoms could be tested. We analysed data on PCR test result, age and sex of the tested person, and postcode of the facility that requested the test; clinical information and reasons for testing were not available. People with positive results who subsequently received two consecutive negative test results at least 24 hours apart were defined as achieving “negative status”. Details of dataset structure, analysis and visualisation methods and code have been reported elsewhere.3,4 Our investigation was exempted from formal ethics review by the Gold Coast Health Human Research Ethics Committee (reference, LNR/2020/QGC/63045).

We analysed data for 103 984 swabs from 97 476 people during the 146‐day study period. Time to negative status was examined by Kaplan–Meier analysis. Differences by age (under 65 years, 65 years or over) and sex, with adjustment for both, were calculated by Cox regression. Other associations between variables were quantified as unadjusted odds ratios. The timing of sample collection, particularly of repeat swabs, was not standardised, reflecting the exploratory nature of SARS‐CoV‐2 testing early in the pandemic.

The numbers of people tested and of those positive for SARS‐CoV‐2 both peaked in the second half of March 2020, after which testing rates declined until late April before climbing again, while positivity rates remained low (Box 1).

We found that positive PCR test results often persisted for ten or more days after an initial positive result, in one case for 72 days. Such persistence does not indicate continued viral replication.2,5 From 21 March 2020, patients in Queensland, other than workers at high risk, were released from isolation on the basis of their symptoms and illness duration (ie, without further testing), and local transmission declined to zero (Box 1). Our finding of lower infection rates in younger people is consistent with previous reports,6 as is our finding that infection rates were higher for males than females.7 After adjusting for age, the viral clearance rate was similar for males and females. Clearance was greater for people under 65 years of age than for those aged 65 or more, as noted previously.8 This effect may have clinical significance; rates of hospitalisation, admission to intensive care, and death from COVID‐19 are higher among older people.

Box 1 – Numbers of SARS‐CoV‐2 tests processed by Queensland Health public laboratories and of people with positive results, 10 January – 4 June 2020, with trend lines and indications for testing* 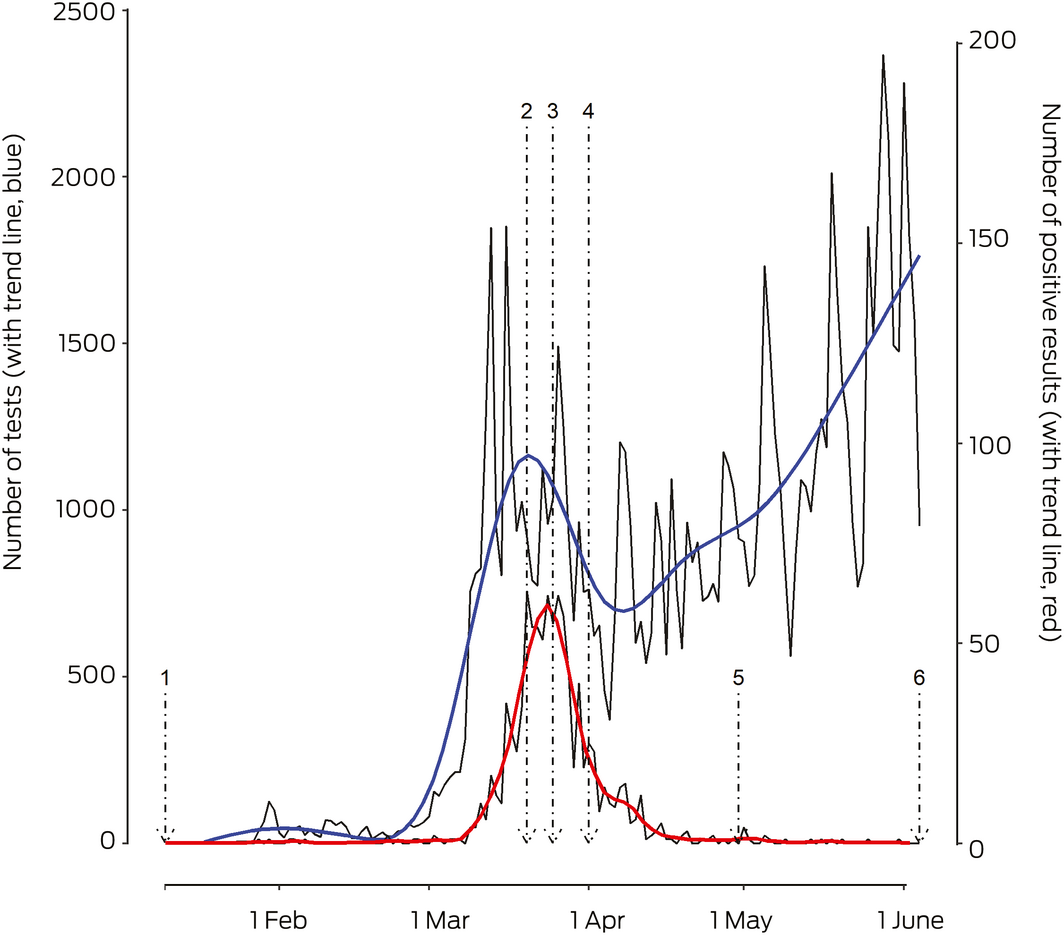 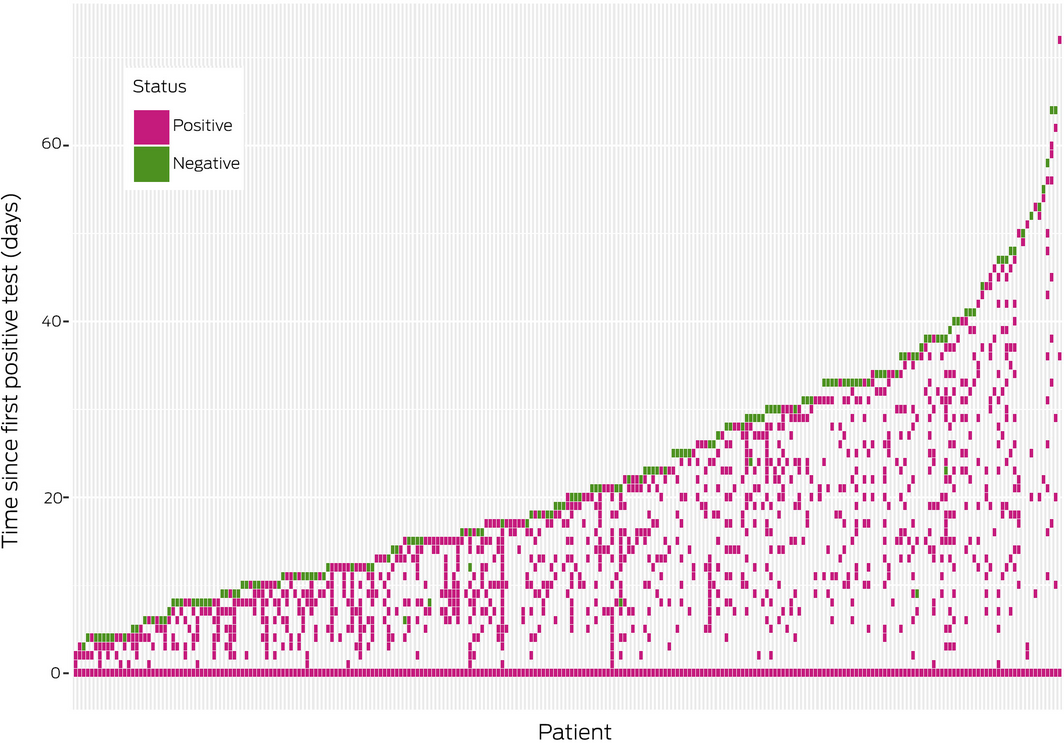 Box 3 – Kaplan–Meier analyses of virus clearance in 958 people who were initially positive for SARS‐CoV‐2, by age and sex* 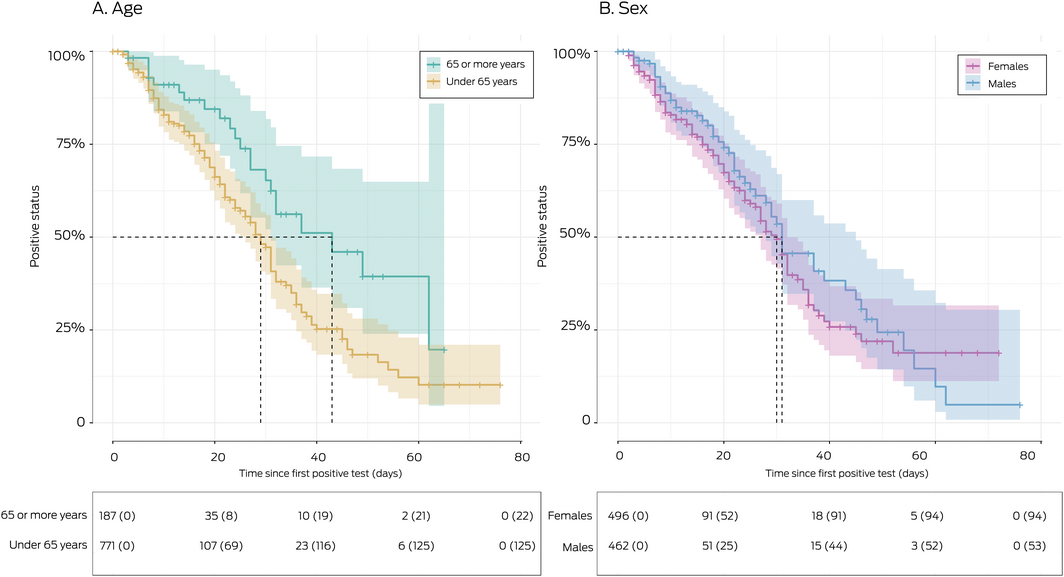 We thank Forensic and Scientific Services and Pathology Queensland for performing PCR testing for SARS‐CoV‐2. We thank AUSLAB (Queensland Health) for providing the data, and particularly the Senior Medical Scientist, Jonathan Fong, for his assistance with navigating data access requirements and understanding the structure and generation of the data.