Australia can use population level mobility data to fight COVID‐19

As we face a second wave of the pandemic, mobility data may assist government public health action

During the coronavirus disease 2019 (COVID‐19) pandemic, stay‐at‐home orders, or the lack thereof, have divided governments and the political sphere worldwide. United States media has reported that US populations decreased their movement before stay‐at‐home orders.1 We studied mobility data from major cities worldwide, including in Australia, and saw the same pattern consistently replicated.

Apple mobility data2 were used as a measure of social mobility and were assumed to correlate with social distancing observance. We extracted available data for 22 cities across nine regions from all six populated continents in a systematic manner to gain a broad cross‐section. These data were then mapped against local government action taken from official websites.

We found worldwide populations reduced their movement before and even without stay‐at‐home orders (Box; Supporting Information, Figures 1–9). Across all cities examined, movement below baseline was seen on average 13 days (median, 9 days) before government enforced stay‐at‐home orders.2 Mean reduction in walking before stay‐at‐home orders was 45% (range, 22–77%).2 For the majority of cities examined, movement voluntarily decreased sharply around 12 March 2020,2 which in any other situation would appear coordinated and uniform to military level precision (Box; Supporting Information, Figures 1–9). The consistency of these data across diverse populations and environments suggests this behaviour is not only driven by strict government restrictions or political pressure within regions. In Sydney, Australia’s COVID‐19 hotspot at the time, population movement dropped below baseline on 14 March,2 before Prime Minister Morrison advised us to stay at home and 9 days before closure of restraurants.5 Many factors may have contributed to this, including minor local public health action such as limiting mass gatherings and closing schools. However, it also coincided with widespread reporting of sharp increases in COVID‐19 deaths in the Lombardy region of Italy by 17 March (1625 reported deaths).7 This near‐instantaneous mass behaviour change is significant; it took 50 years and billions of dollars to reduce smoking rates,8 and John Snow9 days to garner community support to remove the Broad Street pump handle during the 1854 London cholera epidemic, both in the face of robust epidemiological evidence. Why did we all just go home?

We postulate that global media coverage reiterating virus seriousness, broadcasting almost real‐time images of full intensive care units and dying families into people’s living rooms, in conjunction with minor public health restrictions, sparked fear and drove mass behaviour change. Even in cities with minimal restrictions, such as Stockholm, there was an average transit decrease of 47% in April 20201,4 (Box). In Rio de Janeiro, a city with conflicting government advice and minimal restrictions,3 across April there was an average 76% decrease in walking1 (Box). In Hong Kong,10 a city that did not deploy a stay‐at‐home advisory but had direct transport and cultural links to Wuhan and previous experience with severe acute respiratory syndrome (SARS) epidemics, movement dropped below baseline on January 23 (Supporting Information, Figure 6), well before other cities, with an ongoing reduction in transit walking of over 50%.1 Singapore11,12 (Supporting Information, Figure 6), with a similar history of SARS, showed a parallel picture to Hong Kong, suggesting that past experience also drives risk perception and behaviour. Individual and community risk perceptions will likely determine behaviour as lockdown restrictions ease. Governments planning for re‐opening or the second wave of the pandemic must combat complacency and social distancing fatigue. Behaviour in Hong Kong and Singapore suggests prior experience can lead to early voluntary social distancing. However, government restrictions may be needed for sustained social distancing. Pandemic‐naïve populations with low restrictions, such as Stockholm and Atlanta13 (Supporting Information, Figure 1), have up‐trending mobility.1

Our analysis has limitations. Apple mobility data are a crude measure of movement and social distancing uptake in the population. They are based on Apple product usage within the population, and use of Apple maps for daily movement. There is variability in volume, consistent with normal, seasonal usage, the large dataset, and diversity of climates. Further, the penetration of Apple products into a particular market and its usage bias towards certain population groups (eg, younger people, greater economic capital) may have influenced results. However, all population level mobility sets have a certain unavoidable level of bias, and the large dataset and consistency appear to outweigh this. We also acknowledge that other datasets are available, such as Google mobility data, which we did not analyse in the present article. 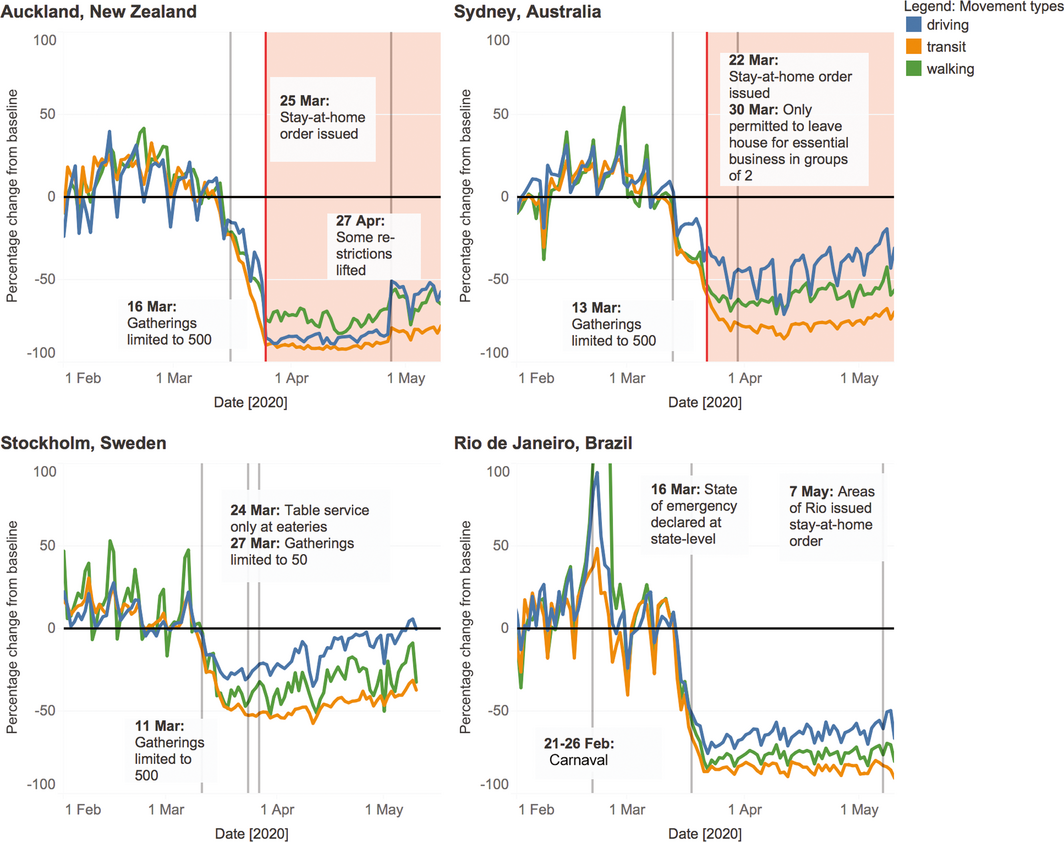 We thank Michael Cusack, Chief Medical Officer of South Australia, for his assistance in preparing this manuscript.