Until recently, analgesic medications containing less than 30 mg codeine per dosage unit were available over the counter in Australia.1 Codeine‐related hospital presentations placed an increasing economic burden on the Australian health care system;2 in response, the Therapeutic Goods Administration re‐scheduled all codeine‐containing products as prescription‐only medicines from 1 February 2018.3

Our clinical toxicology unit undertook a retrospective review of codeine‐related presentations (deliberate self‐poisonings and recreational exposures) from 1 February 2017 to 31 January 2019; that is, the 12 months preceding and the 12 months following codeine rescheduling. Our unit manages all patients who present with poisoning to the Princess Alexandra Hospital in Brisbane. Data are prospectively entered into a purpose‐built database that we searched for codeine‐related presentations; we examined patient medical records for ingestion information, clinical features, treatment, and complications. The statistical significance of differences in proportions was assessed in Fisher exact tests. Our study received ethics approval from Metro South Health Human Research Ethics Committee (reference, HREC/14/QPAH/308).

The median amount of codeine ingested was similar in both periods: 200 mg (interquartile range [IQR], 130–390 mg; range 6–1800 mg) before and 270 mg (IQR, 120–600 mg; range, 24–2280 mg) after rescheduling. About 90% of the products ingested in each period were paracetamol co‐formulations. Acetylcysteine was administered to patients during 47 presentations before and 17 presentations after rescheduling.

Severe toxicity was rare; naloxone reversal of opioid toxicity was infrequent (14 cases before, 10 after rescheduling) and almost exclusively related to co‐ingestion of other opioids. One patient died in the 12 months prior to codeine rescheduling, after delayed presentation and with established paracetamol‐induced hepatic failure. Two patients died during the 12 months after rescheduling; one death was secondary to a massive propranolol co‐ingestion, the other followed delayed presentation with codeine‐induced opioid toxicity, resulting in severe hypoxic brain injury.

Our study was limited by its single centre, retrospective design. Patients may have presented to other hospitals after codeine was rescheduled, but the total number of poisoning presentations to our unit was higher during the period after rescheduling.

Box – Codeine‐related presentations to the Princess Alexandra Hospital, Brisbane, during the 12‐month periods before and after rescheduling of codeine by the Therapeutic Goods Administration 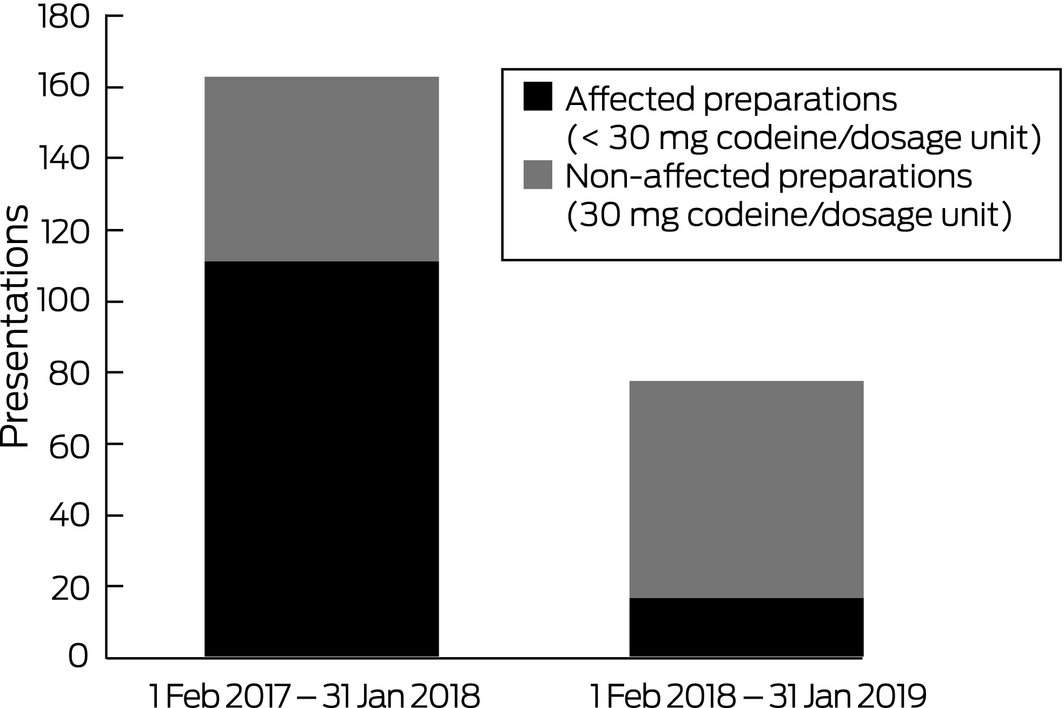