Survival of patients with ruptured and non‐ruptured hepatocellular carcinoma

Hepatocellular carcinoma (HCC) is causing an increasing number of deaths in Australia; the 5‐year survival rate from diagnosis is about 16%.1 Tumour rupture is a life‐threatening complication and the third most common cause of death (after tumour progression and liver failure) for people with HCC; mortality caused by rupture during the acute phase has been reported to be 25–75% in Asian countries.2,3 The poor prognosis is related to intraperitoneal haemorrhage and the potential for intraperitoneal metastases. Hypotheses about the cause of spontaneous rupture include rapid growth and necrosis, splitting of the overlying parenchyma or vessel erosion, increased intratumoral pressure with hepatic vein occlusion, and coagulopathy.2 Tumour size exceeding 50 mm and superficial location are risk factors for rupture.3

We investigated the impact of spontaneous HCC rupture on survival. All adult patients who presented with spontaneous HCC rupture to six tertiary referral hospitals in Melbourne between January 2007 and July 2018 were included in our retrospective case–control study. We extracted data for patients with non‐ruptured HCC (ratio, 3:1) from a Victorian prospective HCC database;4 the patients in the two groups were matched for age, sex, Barcelona Clinic Liver Cancer stage, and Model of End‐Stage Liver Disease score by propensity score matching. De‐identified data on baseline characteristics, management of rupture, and outcomes were extracted from patient medical records. Statistical analyses were conducted in SAS 9.4 and R 3.5.0. The study was approved by the Alfred Hospital Human Research Ethics Committee, which waived the requirement for informed consent (reference, 109/17).

The longer survival for our cohort of patients with ruptured HCC than in other studies may be explained by their having greater hepatic functional reserve and less evidence of vascular thrombus and extrahepatic invasion (Box 1) than reported for other study cohorts.2 Curative surgical management may also have improved survival. For 26 of 33 patients in the rupture group (79%), spontaneous rupture was the first indication of HCC; lead time bias or earlier consideration of therapy after managing the rupture were therefore possible. Nevertheless, our data indicate that tumour rupture may not be as important as other prognostic factors for survival.

Although our study encompassed ten years of data, the number of patients with ruptured HCC was small, consistent with the low incidence of rupture in Western countries (2–3%).5 Reporting and ascertainment bias were possible, as some patients may have died before reaching hospital or while undergoing confirmatory imaging. However, our study is the first in Australia to specifically examine the influence of spontaneous rupture as a prognostic factor in patients with HCC, using propensity matching to adjust for variables known to influence survival.

Given the potential for median survival times of more than 12 months, patients with ruptured HCC should be treated with the aim of long term survival. Larger prospective studies of the impact of HCC rupture on prognosis are warranted. 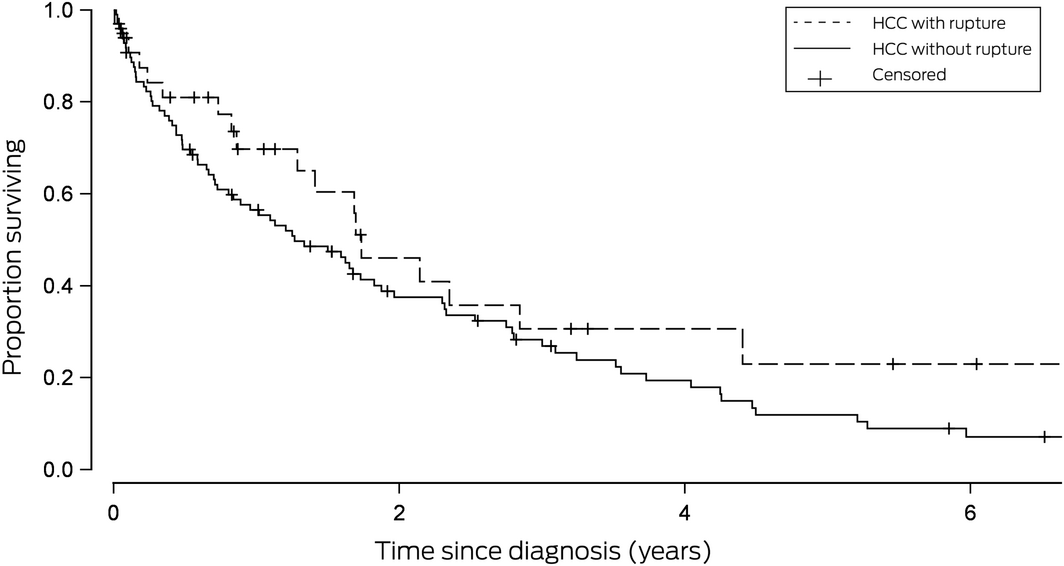