Objective: To assess whether a practical intervention based upon a smartphone application (app) would improve self‐management and seizure control in adults with epilepsy.

Participants: 380 eligible people with epilepsy were recruited; 327 completed the 6‐month follow‐up (176 in the app group, 151 in the control group).

Conclusions: Using a smartphone app improved epilepsy self‐management scores in people in western China. It should be further tested in larger populations in other areas. Our preliminary investigation of building digital communities for people with epilepsy should encourage similar approaches to managing other chronic diseases.

The known: The treatment of epilepsy, one of the most common chronic neurological diseases, places large demands on medical resources and imposes a heavy economic burden, especially in resource‐poor areas. The efficiency of its management, in terms of enhancing medical compliance and improving seizure control, must be improved.

The new: We found that using an epilepsy‐specific smartphone application is feasible, efficient, can improve self‐management by patients, and may improve seizure control.

The implications: The potential importance of modern mass communication techniques for managing chronic disease should be explored further, particularly among people in resource‐poor or remote areas.

Epilepsy, one of the most common chronic neurological diseases, affects 50 million people around the world,1 including about 9 million people in China.2 The current management of epilepsy needs to be improved.3,4 In an earlier study, we described an intervention package that enhanced medical compliance and improved seizure control in patients with epilepsy in resource‐poor rural communities.5

Given the widespread use of smartphones, mobile phone applications (apps) and online communities have emerged as tools for managing some chronic medical conditions, such as diabetes mellitus and hypertension.6,7,8,9 We have previously established that people in China with epilepsy and their caregivers are willing to use smartphone apps.10,11,12 As there have been few investigations of the feasibility and efficacy of epilepsy‐specific apps in resource‐poor countries, we developed and undertook the preliminary validation of the Chinese Epilepsy Self‐Management Scale (C‐ESMS) for assessing the quality of self‐management.13 We also designed an app prototype and enrolled participants to test its practicability and effectiveness in a pilot study, the results of which we report in this article.

The primary research question was whether a practical intervention based upon a smartphone application (app) would improve self‐management and improve seizure control in adults with epilepsy.

Our study was undertaken in Chengdu, western China. People with epilepsy were consecutively recruited at the Epilepsy Center of the Sichuan Provincial People's Hospital. Epilepsy was diagnosed in accordance with the recent International League Against Epilepsy (ILAE) criteria.14 We included adult patients (more than 18 but less than 60 years of age) with epilepsy of more than one year's duration who had had more than three seizures during the 6 months preceding recruitment; participants also needed to reside in the study area, be proficient in the use of smartphones, and have provided written consent to participate in the study. Exclusion criteria were severe intellectual and developmental impairment, neurologic disease, psychosis, or other severe medical conditions (eg, tumours, fractures); illiteracy or mental incompetence; and current participation in another research project.

The prototype of the epilepsy management app was built on the WeChat platform, one of the leading Chinese multipurpose messaging and social media apps (developed by Tencent: https​://devel​opers.weixin.qq.com/minip​rogra​m/intro​duction [in Chinese]). WeChat provides a wide range of functions and platforms, and the preliminary design of our app relied on the WeChat platform instead of a standalone server from the outset.

Participants were encouraged to manage their own treatment and lifestyle to achieve optimal quality of life and seizure control.15 Accordingly, the core functions of the app were a medication calendar, online educational forums and blogs, a facility for prompt online reporting of seizures and online consultations (messaging or video call), and online questionnaires (Supporting Information, figure).

Primary outcomes included self‐management of epilepsy and seizure frequency. Self‐management was measured with the C‐ESMS (Supporting Information)13 at recruitment and 6 months after randomisation; higher scores indicate better self‐management. Seizure frequency was calculated for the 6 months preceding enrolment (baseline) and during the 6‐month follow‐up. Four categories of seizure reduction were defined: grade 1, no clear seizure reduction (less than 50%) or aggravation; grade 2, seizure reduction of at least 50% but less than 75%; grade 3, at least 75% but less than 100%; and grade 4, freedom from seizures. We also assessed online activities in the app group, including number of log‐ins, online time, and frequencies of educational article reading, commenting and questioning online, and messaging.

The analyses were conducted in SPSS 22.0. Categorical and continuous variables were assessed in χ2, corrected χ2, Fisher exact and t tests, as appropriate. Before undertaking t tests, data skewness and kurtosis were assessed; if necessary and possible, data were transformed to produce a normal distribution before a test of homogeneity of variance (Levene test) was applied to guarantee validity of comparison. Continuous variables were assessed in Mann–Whitney tests. We undertook both intention‐to‐treat and per protocol (completer) analyses; in the intention‐to‐treat analyses, we assumed no change for participants who did not complete the follow‐up assessments.

Factors associated with changes in C‐ESMS score were assessed by linear regression, including demographic (sex, age, education level), clinical (seizure frequency, C‐ESMS scores), and app activities as variables; association between changes in seizure frequency and C‐ESMS score was assessed by Spearman rank correlation. P < 0.01 (Bonferroni‐adjusted) was deemed statistically significant for comparisons of scores on the five C‐ESMS subscales; for all other comparisons; P < 0.05 was deemed statistically significant.

In accordance with an earlier publication16 and our pilot baseline data, a sample size of 150 subjects in each group was adequate for detecting a change in C‐ESMS score of 6 points (C‐ESMS standard deviation, 15 points) with 90% power (two‐tailed α = 0.05; β = 0.1).

The baseline demographic and clinical characteristics and baseline C‐ESMS scores of the two groups were similar (Box 2). Of 380 randomised participants, 327 (86.1%) completed the follow‐up assessment (app group, 176; control group, 151); as the number of men who did not complete the survey was greater for the control than the intervention group (28 v 7), but the numbers of women not completing the survey were similar (control, 11; intervention, 7), the proportion of men among completers was slightly higher for the app group than for the control group (54% v 50%). Medications for each participant were kept constant during the study; 210 patients used levetiracetam (55.3%), 175 patients oxcarbazepine (46.1%), 185 patients valproate (48.7%), 56 patients lamotrigine (15%), and 47 patients used other drugs (12%). No severe adverse events related to app use were observed during the study. In the intervention group, 28 patients (15%) reported anti‐epileptic drug‐related adverse reactions (including drowsiness, dizziness, headache, agitation) and 15 patients (8%) reported seizure‐related injuries (such as bruises, skin abrasion); in the control group, anti‐epileptic drug‐related adverse reactions were reported by 25 patients (13%) and seizure‐related injuries by nine (5%).

There were no important baseline differences between the intervention and control groups that would have influenced our results. All patients in our study had experienced at least three seizures during the preceding six months. A positive effect of app use on seizure frequency was expected, although some participants had drug‐resistant epilepsy, which may have reduced the efficacy of the intervention. Further, most of our participants were younger people (under 50 years of age), a group more likely to be willing to use mobile phone apps.

The 6‐month C‐ESMS completion rate (86%) was higher than for similar studies (about 40%).16,20,21 Possible explanations include the fact that eligible participants were carefully enrolled and supervised during follow‐up; a recent uncontrolled seizure may motivate a patient to attend follow‐up; a friendly doctor–patient relationship was developed during the clinical consultations; and most of our participants were well educated younger patients who had agreed to participate in the study and were therefore inclined to adhere to the treatment program. However, satisfaction with outpatient management and with the app were not formally assessed.

Statistically significant improvements in self‐efficacy and self‐management measures in American veterans with epilepsy were achieved with an online psychosocial intervention over six weeks (POEM study);16 another recent study similarly reported that an epilepsy self‐management program improved ESMS scores.22 In our study, self‐management, as assessed by C‐ESMS scores, also improved for patients using the app, but the magnitude of the change was considerably greater than in earlier studies. One possible explanation might be the lower baseline scores in our study. Whereas the greatest improvement reported in the POEM study was in the domain of information management,16 we also found statistically significant improvements in medications and safety management. These differences may have several reasons: the lower baseline C‐ESMS scores in our study allowed greater increases during the intervention; the app intervention included a component of active patient engagement that strengthened medical compliance, rather than passively providing educational materials alone; and the younger age of our participants may have been associated with better acceptance of the app and more active participation.

Although no association between improved C‐ESMS score and reduced seizure frequency was found, short term seizure amelioration in the app management group was apparent. It is probable that improved self‐management had an effect on seizure control, as many C‐ESMS factors are relevant to seizure recurrence. Epilepsy is a complex disorder: the effects of quality of life and factors such as emotion on the predisposition to seizure recurrence deserve investigation. Moreover, our participant group included people with drug‐resistant epilepsy, which may have influenced our results. Overall improved seizure control in the intervention group may be related to a number of app functions that encourage constant engagement with self‐management and communication between patient and doctor. Indeed, it may not be the app per se that achieved improved outcomes, but rather that patients were invited to use the app in this manner.

The randomised controlled design minimised confounding by extraneous factors, so that comparing the two groups did not require complex statistical analyses. Nevertheless, our study had several limitations. First, the demographic characteristics of the participants may not reflect those of all people with epilepsy in western China; we selected smartphone users, skewing our selection to younger people. Second, the primary outcomes were based on self‐report, which could increase information bias; further, if interviewees unintentionally exposed their allocation, the blinded nature of the study would be compromised. Third, follow‐up may not have been long enough to gauge longer term changes. Fourth, the app focused on medication use rather than other health behaviours or psychological factors such as stress and depressive symptoms. Fifth, determining which app functions contributed more to the measured outcomes will require its further refinement and analysis.

Our study provided evidence for the benefits of epilepsy‐specific apps for improving patient self‐management and reducing seizure frequency. The use of such apps could support epilepsy management in resource‐poor regions. Our preliminary investigation of building digital communities for people with epilepsy should encourage similar approaches to managing other chronic diseases.

The data are owned by corresponding authors and can be provided on request. 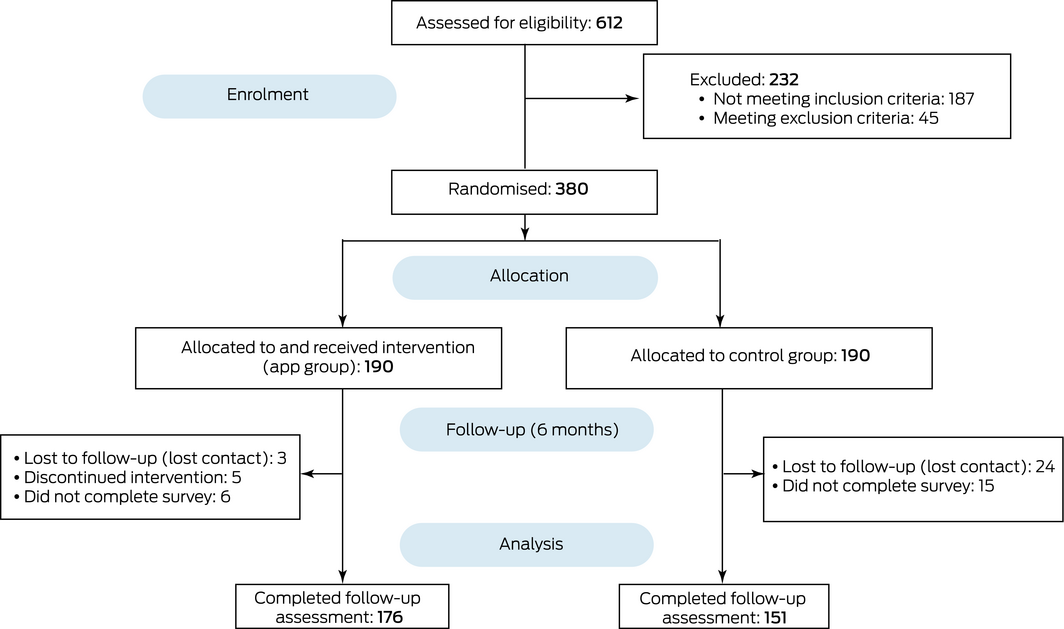 Box 3 – Outcomes at 6‐month follow‐up for participants in the intervention (app) and control groups: intention‐to‐treat (ITT) and per protocol (completer, PP) analyses

This investigation was supported by the National Natural Science Foundation of China (NSFC, 81701269).