Essential oils are aromatic, volatile liquids extracted from plant material by steam distillation and named for the plants from which they are derived.1 Essential oils are readily available in pharmacies, supermarkets, health food stores, and online. In 2017, 11% of Australians reported using essential oils for medicinal purposes in the previous year;2 the major reported sources of advice were general practitioners (10%) or pharmacists (18%), while 43% of oils were self‐prescribed.2

Essential oils are typically used topically or added to vaporisers, but oral ingestion of small amounts is recommended by some suppliers. They can, however, cause severe toxicity when ingested, the risk depending on the oil used; the onset of toxicity can be rapid, and small quantities (as little as 5 mL) can cause life‐threatening toxicity in children.3 Clinical effects include vomiting, central nervous system depression or excitation, and aspiration pneumonitis.3 Increasing frequency4 and severity5 of essential oil poisonings have been reported in Europe and the United States.

We conducted a retrospective study of essential oil exposure calls to the New South Wales Poisons Information Centre (NSWPIC) during July 2014 – June 2018. NSWPIC takes about half of all calls to Poisons Information Centres in Australia. We characterised essential oil exposures, including the essential oils involved and changes over time, the demographic characteristics of exposed persons, and seasonality. Change over time was assessed by Poisson regression in SAS 9.3. The Human Research Ethics Committee of the Sydney Children's Hospitals Network approved the study (reference, LNR/16/SCHN/44).

We found that essential oil exposures are frequent in Australia, and that more than half involve children. We identified a small subset of cases of misinformed misuse (intentional ingestion for perceived health benefits). Exposures are increasing in number, perhaps reflecting increased use of essential oils and indicating the need for public education. Safe storage is important, and we recommend that essential oils be kept separate from oral medications to prevent therapeutic errors. Flow restrictors and child‐resistant closures would be desirable, but containers are only required to have such closures when the essential oil volume exceeds 15 mL; as severe toxicity can be caused by as little as 5 mL, this is inadequate for protecting children. Health care professionals and members of the public can receive advice about essential oil exposures from the Poisons Information Centre on 131126 (24 hours, Australia‐wide). 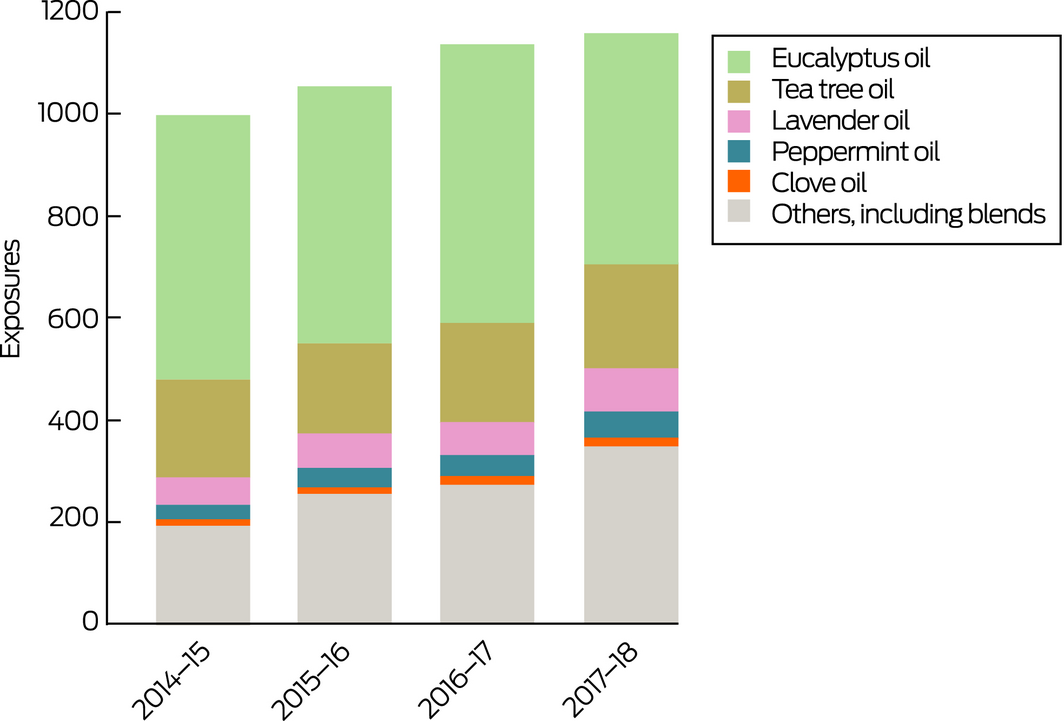 We thank staff at the New South Wales Poisons Information Centre for their contributions to the NSWPIC database.