Objectives: To describe the first isolation and sequencing of SARS‐CoV‐2 in Australia and rapid sharing of the isolate.

Setting: SARS‐CoV‐2 was isolated from a 58‐year‐old man from Wuhan, China who arrived in Melbourne on 19 January 2020 and was admitted to the Monash Medical Centre, Melbourne from the emergency department on 24 January 2020 with fever, cough, and progressive dyspnoea.

Major outcomes: Clinical course and laboratory features of the first reported case of COVID‐19 (the illness caused by SARS‐CoV‐2) in Australia; isolation, whole genome sequencing, imaging, and rapid sharing of virus from the patient.

Results: A nasopharyngeal swab and sputum collected when the patient presented to hospital were each positive for SARS‐CoV‐2 (reverse transcription polymerase chain reaction). Inoculation of Vero/hSLAM cells with material from the nasopharyngeal swab led to the isolation of SARS‐CoV‐2 virus in culture. Electron microscopy of the supernatant confirmed the presence of virus particles with morphology characteristic of viruses of the family Coronaviridae. Whole genome sequencing of the viral isolate and phylogenetic analysis indicated the isolate exhibited greater than 99.99% sequence identity with other publicly available SARS‐CoV‐2 genomes. Within 24 hours of isolation, the first Australian SARS‐CoV‐2 isolate was shared with local and overseas reference laboratories and major North American and European culture collections.

Conclusions: The ability to rapidly identify, propagate, and internationally share our SARS‐CoV‐2 isolate is an important step in collaborative scientific efforts to deal effectively with this international public health emergency by developing better diagnostic procedures, vaccine candidates, and antiviral agents.

The known: By 12 March 2020, 140 cases of COVID‐19 (the illness caused by SARS‐CoV‐2) had been confirmed in Australia; three patients had died. At the end of January, the sequence of the virus had been shared but no laboratory outside China had grown the virus or had access to live virus.

The new: We describe the clinical course and laboratory features of the first reported case of COVID‐19 in Australia, as well as the isolation, sequencing, imaging, and rapid global sharing of virus isolated from the patient.

The implications: Rapid identification, propagation and international sharing of SARS‐CoV‐2 is an important step in collaborative scientific efforts and diagnostic test validation in response to this public health emergency.

The recognition in 2019 of the first outbreak in Wuhan, China, of a respiratory disease (COVID‐19) associated with a novel coronavirus, severe acute respiratory syndrome coronavirus 2 (SARS‐CoV‐2) triggered an international response unparalleled in its scale and tempo.1,2,3,4,5,6 In particular, the rapid sharing and integration of clinical and epidemiological data has facilitated understanding of the spectrum of clinical disease caused by SARS‐CoV‐2 and the extent of its global spread, although there are still many unanswered questions. Further, rapid genomic analyses have corroborated epidemiological investigations, suggesting a global point source outbreak of a novel betacoronavirus originating in Wuhan.2,5

The fundamental pillars of the control of any infectious disease are effective prevention, diagnostic, and treatment strategies. For viral pathogens, the propagation of live virus and the timely dissemination of the viral isolate to domestic and international scientific and public health agencies are critical. Rapid sharing of material has allowed laboratories to validate their diagnostic assays and to confirm their ability to detect SARS‐CoV‐2. In this report we describe the clinical course and laboratory features of the first reported case of COVID‐19 in Australia, together with the isolation, sequencing, and imaging of the virus.

A 58‐year‐old man from Wuhan, China, felt unwell on the day of his arrival in Melbourne (19 January 2020). In China, he had had no contact with live food markets, people known to have COVID‐19, or hospitals. His medical history included type 2 diabetes mellitus, and he had ceased smoking four years previously. He developed fever on 20 January and a cough with sputum production on 23 January; on 24 January, he was admitted to the Monash Medical Centre, Melbourne, from its emergency department with progressive dyspnoea. His temperature was 38.1°C, his heart rate 95 beats/min, and O2 saturation 94% on room air. A chest x‐ray showed subtle ill‐defined opacities in the middle zones bilaterally and in the left lower zone. A thoracic computed tomography scan on admission day four identified extensive ground glass opacities with a peribronchovascular and peripheral distribution in the middle to upper zones of the lungs (Box 1). Full blood examination results included a lymphocyte count of 0.80 × 109/L (reference range, 1.0–4.0 × 109/L). C‐reactive protein concentration peaked on admission day 6 at 182 mg/L (reference range, 0–5 mg/L). Liver function test abnormalities peaked on admission day 12 — alkaline phosphatase, 210 U/L (reference range, 30–110 U/L); γ‐glutamyltransferase, 416 U/L (reference range, 30–110 U/L); alanine aminotransferase, 183 U/L (reference range, 5–40 U/L) — and hepatic steatosis was evident on liver ultrasound. Intravenous ceftriaxone (2 g/day) and azithromycin (500 mg/day) were commenced on admission day 4 to treat potential secondary bacterial pneumonia, although no bacterial pathogen was identified. Low‐flow oxygen (maximum 3 L/min via nasal prongs) was administered until admission day 10. The patient gradually improved; fever, productive cough and dyspnoea resolved by admission day 12, and he was discharged from hospital on 7 February (admission day 15).

Material from the initial nasopharyngeal swab was used to inoculate a Vero/hSLAM cell line (European Collection of Authenticated Cell Cultures [ECACC] #04091501). Flasks were monitored for the development of viral cytopathic effect and 140 μL aliquots removed every 48 hours to assess virus burden by real time RT‐PCR.

Detection of SARS‐CoV‐2 in clinical samples

In consultation with the World Health Organization, the viral isolate was shared with domestic and international reference laboratories within 24 hours, and lodgement with major North American and European culture collections for further distribution is underway.

Phylogenetic analysis indicated that the genome sequence of our isolate (BetaCoV/Australia/VIC01/2020) exhibited greater than 99.99% sequence identity with other publicly available SARS‐CoV‐2 genomes (online Supporting Information, 3.4), consistent with the epidemiological features of this case originating in Wuhan.10 Compared with the National Center for Biotechnology Information (NCBI) SARS‐CoV‐2 reference sequence (NC_045512.3), there were three previously described single nucleotide polymorphisms and a 10 base pair deletion in the 3’ untranslated region (3'UTR) (Supporting Information, 3.4). Our sequences are available at GenBank (accession number, MT007544.1), and the genome was rapidly uploaded to the Global Initiative of Sharing All Influenza (GISAID) (accession number, EPI_ISL_406844).

We have described the first reported case of COVID‐19 in Australia, with rapid diagnosis, and isolation, imaging, and sharing of the causative agent, SARS‐CoV‐2. By 12 March 2020, there had been 140 confirmed cases in Australia; three patients had died.11 Although 65% of confirmed cases around the world have been reported from China, an increasing number are being reported in South Korea, Italy, and Iran, and limited human‐to‐human transmission has been described.6,10,11,12 Although the number of cases in Australia is relatively small, the political and societal effects (as in other countries) have already been considerable, including travel restrictions to and from mainland China, the Republic of Korea, Italy, and Iran.13 The sustainability of these measures and their effects on local and global control remain to be established, but the consequences of the outbreak will probably be felt for many months, if not longer.

The clinical features in our case were consistent with other recent reports, including the initial presentation of fever, cough, and progressive dyspnoea.3,6 It is notable that the viral burden was greatest in sputum specimens, which remained positive for SARS‐CoV‐2 for eight days after initial presentation, compared with four days for nasopharyngeal swabs (Box 2). The decline in viral load was correlated with the resolution of fever and, ultimately, clinical improvement. One unresolved question is whether patients who are clinically stable and deemed fit to be discharged from hospital but have PCR‐detectable virus are infectious, or whether this indicates only the persistence of non‐infectious, residual viral RNA.

We applied standard techniques to isolate the virus, but we were the first group to isolate it outside China during the early stages of the epidemic. Potential reasons for our success could be the viral burden of the collected specimens and the extensive clinical experience in our reference laboratory.

An important aspect of the scientific response to the COVID‐19 outbreak has been the rapid sharing of information about diagnostic assays and genomic data, enabling rapid elucidation of the emergence and spread of the novel virus. In addition, a major principle of our laboratory response in Australia was to immediately share the viral isolate with the WHO and other laboratories to facilitate rapid validation of diagnostic testing. We continue to share live virus with other agencies, both locally and overseas, involved in the development and testing of therapeutic agents and vaccines. This is an essential function of public health reference and research laboratories, and we strongly encourage others to apply a similarly collaborative approach to streamlining efforts to diagnose, prevent, and treat COVID‐19 during this public health emergency. 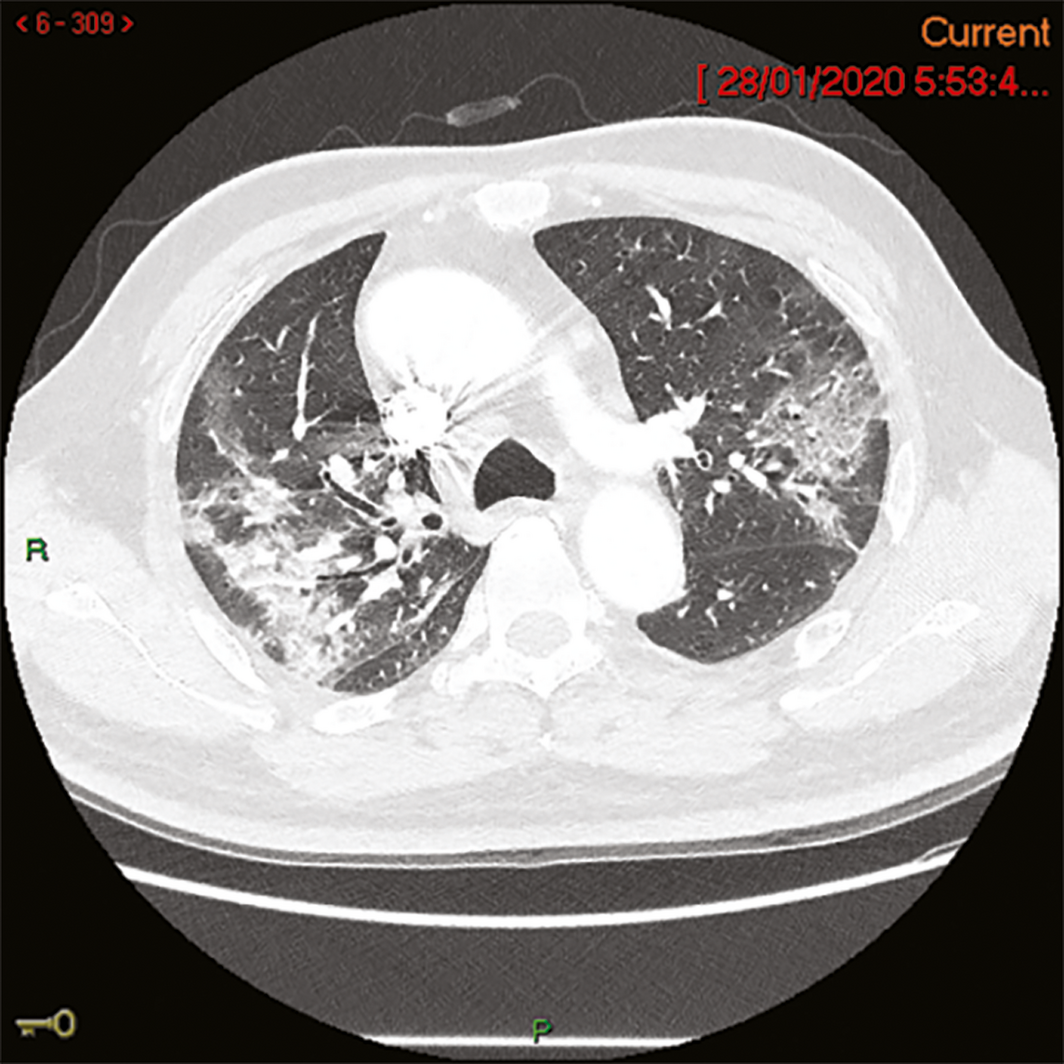 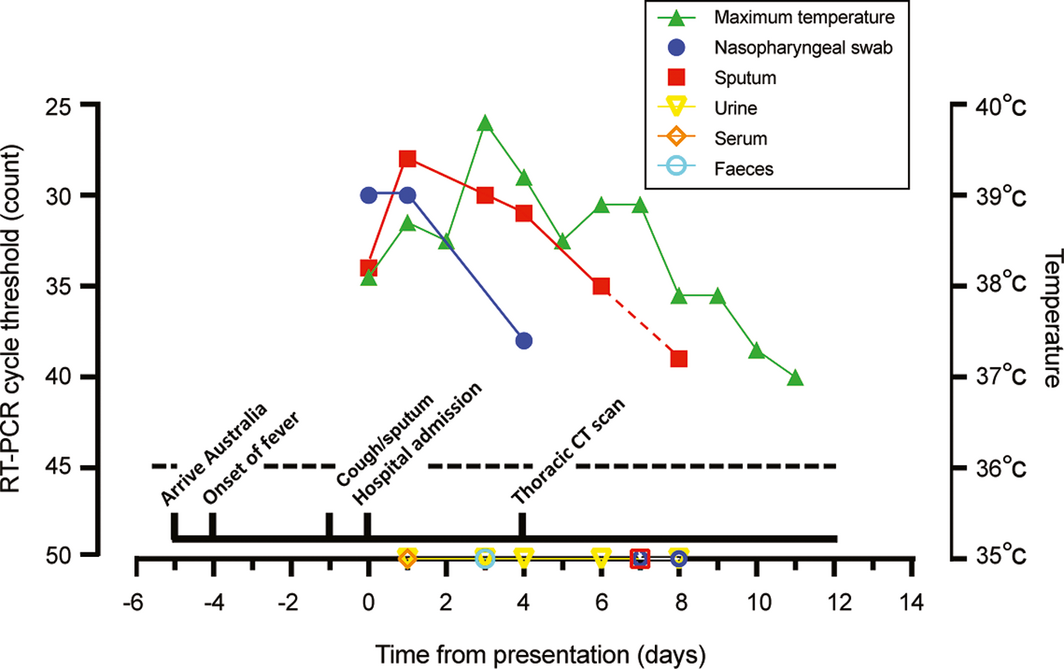 SARS‐CoV‐2 was quantified by real time RT‐PCR. The cycle threshold count is shown for each specimen type; an increase in count value is consistent with reduced viral load. The assay limit of detection (dashed line) threshold is a count of 45; open symbols beneath the threshold indicate null detection of virus. 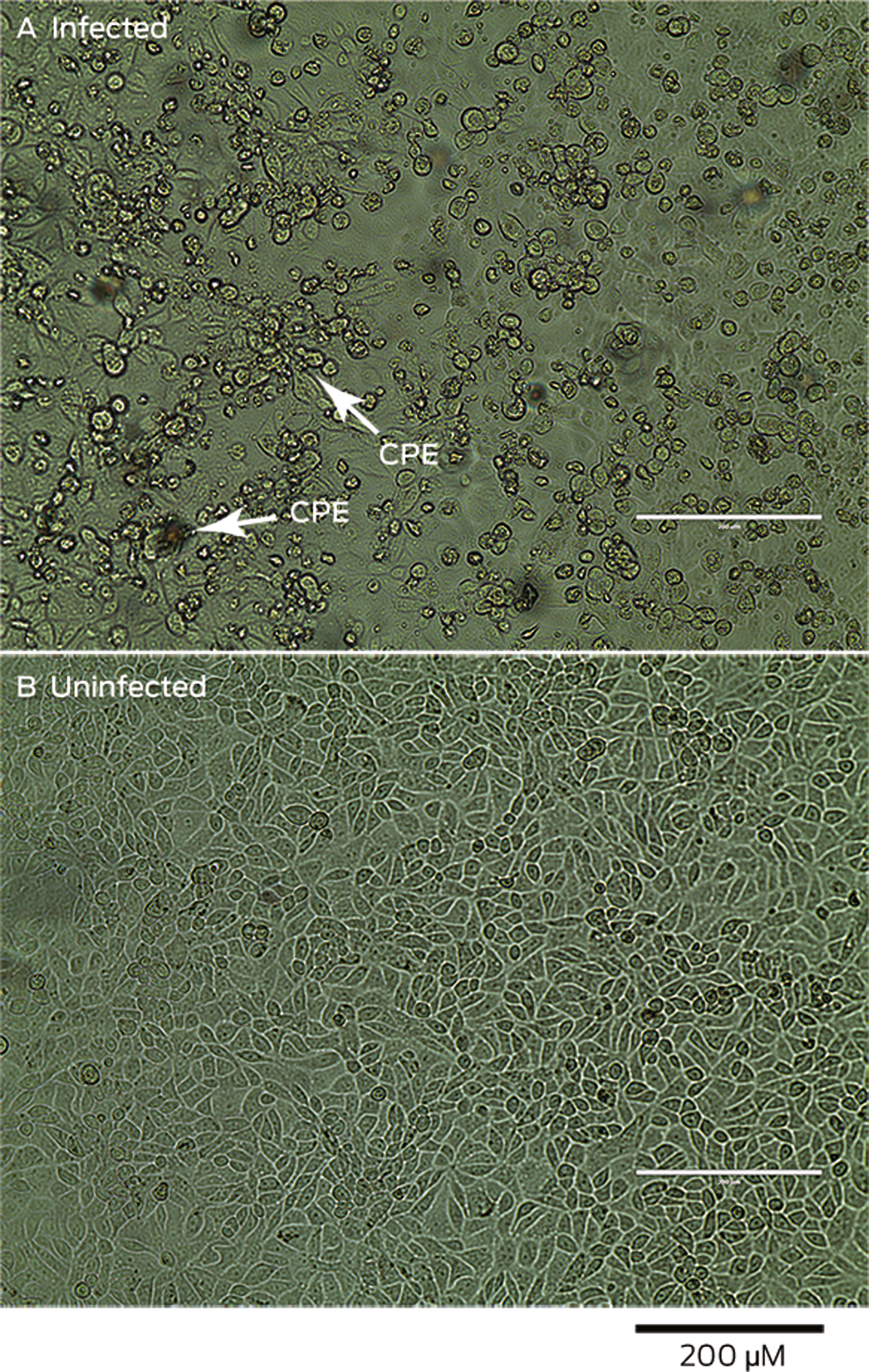 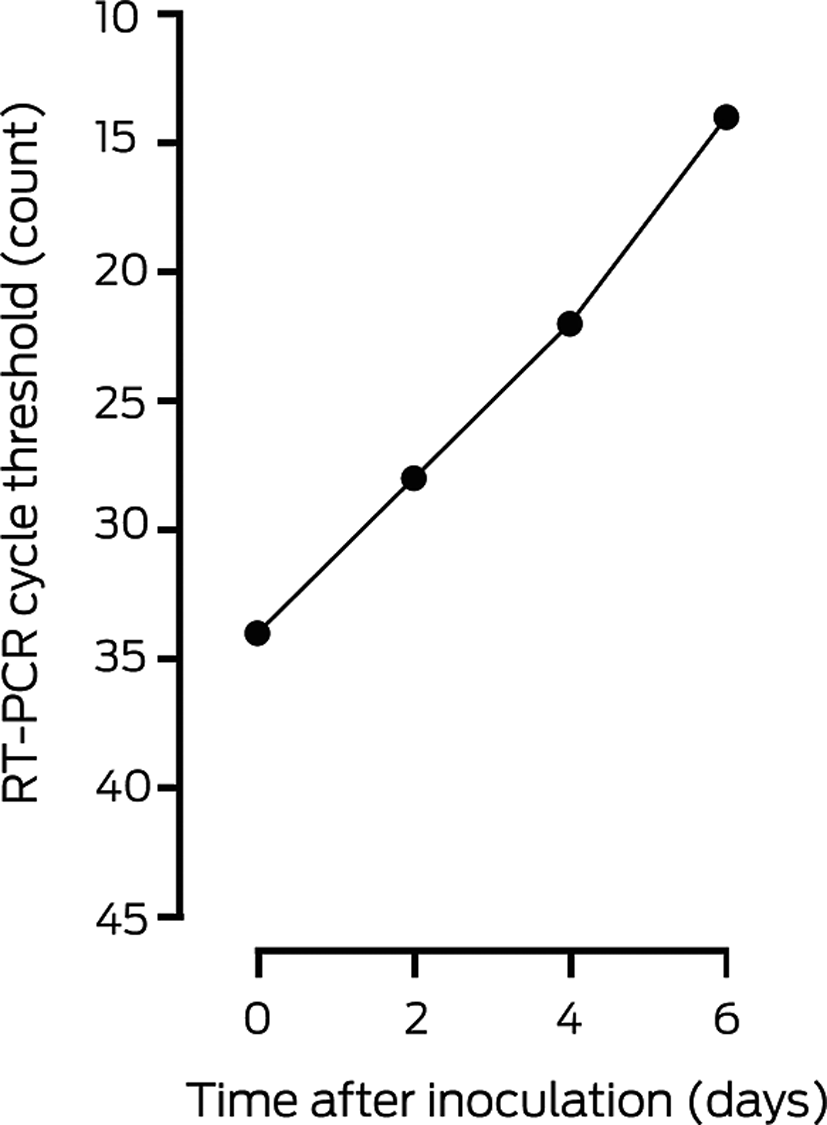 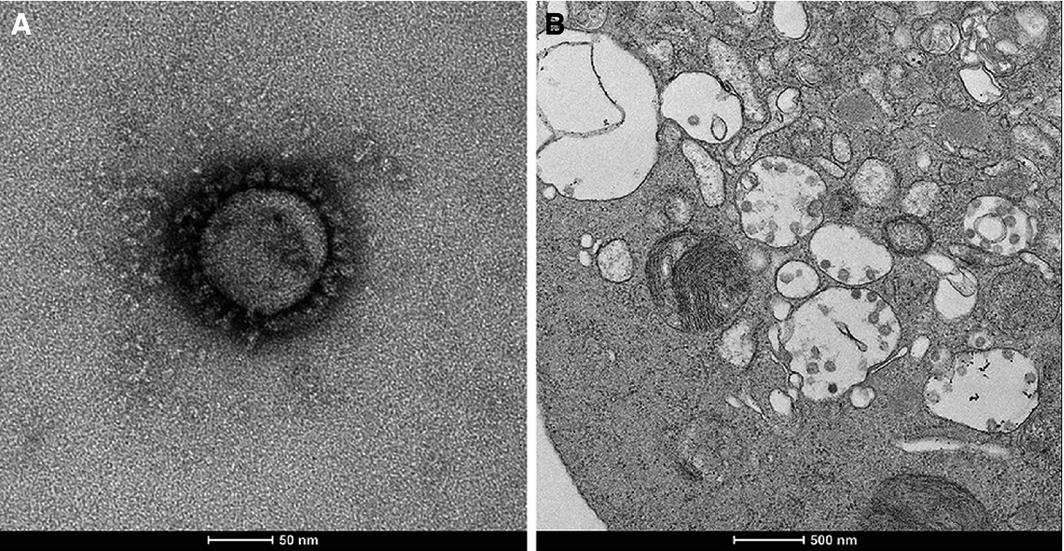 Sharon Lewin receives research support from the National Health and Medical Research Council (NHMRC). Sharon Lewin and Benjamin Howden are NHMRC Practitioner Fellows; Deborah Williamson holds an NHMRC Investigator grant. Sharon Lewin and Mike Catton are supported by the Australian Partnership for Preparedness Research in Infectious Diseases Emergencies (APPRISE), an NHMRC‐funded Centre for Research Excellence.We acknowledge our public health partners and the Victorian Department of Health and Human Services, the major funder of the Victorian Infectious Diseases Reference Laboratory, without whom this work would not have been possible. We also thank the clinical and laboratory staff involved in the care of our patient. We thank Andrew Leis and Eric Hanssen (Melbourne Advanced Microscopy Facility, Bio21 Institute) for their assistance with the FEI L120C (during preliminary screening) and FEI F30 microscopes, and Susan Ballard and Michelle Sait (Microbiological Diagnostic Unit Public Health Laboratory, University of Melbourne) for assistance with Illumina sequencing. We also thank Dave O'Connor (University of Wisconsin Medical Foundation) for his support and assistance in establishing the SISPA protocol at the Doherty Institute. We thank Jasminka Sterjovski for assisting with preparation and submission of the manuscript.