Objectives: To estimate rates of HIV infection, chlamydia, gonorrhoea, and infectious syphilis in transgender men and women in Australia; to compare these rates with those for cisgender people.

Conclusions: The epidemiology of STIs in transgender people attending Australian sexual health clinics differs from that of cisgender patients. Gender details must be captured by health data systems to facilitate appropriate delivery of sexual health care.

The known: The rates of HIV and other sexually transmissible infections (STIs) are greater overseas for transgender men and women than for other people. Data from Australia are very limited.

The implications: Health services need to meet the unique sexual health needs of transgender people, and patient gender information must be better captured by health systems.

Developing awareness of the problems faced by transgender people, including stigmatisation and discrimination,1 structural barriers to health care,2 and violence,3 has spurred their investigation. Researchers and advocates, however, have repeatedly bemoaned the paucity of reliable data, noting “the need to explicitly consider sex and gender pathways and mechanisms in epidemiologic research and public health surveillance more broadly”.4

Infection with the human immunodeficiency virus (HIV) and other sexually transmissible infections (STIs) are health problems for transgender people overseas4 and in Australia.5 A meta‐analysis found that transgender women are 49 times as likely to be HIV‐positive as adults in the general population,6 but the situation in Australia is unclear. Almost nothing is known about STI rates in transgender men, and the inclusion of all transgender people (ie, both men and women) in a single, third gender category by the national passive surveillance system hinders analyses of the relevant data in Australia.

STIs in transgender men and women in Australia have only been investigated in three single urban clinic studies in Sydney and Melbourne7,8,9 from which it is difficult to draw general conclusions about the sexual health of transgender people. It is unknown whether transgender men and women are at greater risk for infection than cisgender people (those whose gender corresponds to their sex at birth), an important question given the rising rates of STIs and the continuing presence of HIV in Australia.10

We analysed data for a national sample of transgender people who had attended publicly funded sexual health clinics in Australia. We estimated rates of HIV, chlamydia, gonorrhoea and syphilis infections in transgender men and women, assessed changes in these rates over time, and compared them with rates for cisgender people.

We conducted a cross‐sectional study of health data extracted from the Australian Collaboration for Coordinated Enhanced Sentinel Surveillance (ACCESS) network.11

We extracted data for the period 1 January 2010 – 31 December 2017 from 46 of 59 publicly funded sexual health clinics in Australia: 33 in New South Wales, seven in Queensland, two in the Northern Territory, and one each in Western Australia, Victoria, South Australia, and the Australian Capital Territory. Twenty clinics were located in major cities, 22 in regional areas, and four in remote parts of the country. Data from the nine other sexual health clinics participating in ACCESS could not be analysed because transgender patients were not separately identified in their data systems.

Patients were classified as transgender men, transgender women, cisgender gay and bisexual men, and cisgender heterosexual people (men and women combined). Each patient had no more than one record at a clinic, but they could have several records if they had attended more than one clinic. ACCESS employed a process of data linkage that relied on non‐reversible alphanumeric keys based on unique patient details (eg, name) to link patient records from different clinics. This process of anonymous linkage could account for slight variations in details (eg, differences in names such as “Bill” and “William”) but not necessarily for deliberate attempts to obscure identity (eg, pseudonyms).11

For each consultation, the following data were extracted: date of clinic visit; and patient age, sex/gender, home postcode (urban or non‐urban12), country of birth (Australia or overseas), HIV status, and Indigenous status.

Sexual health clinics in Australia often collect behavioural risk data that we extracted when available: injecting drug use, sex work, condom use, sexual partner numbers, and gender of partners during the 12 months preceding a consultation.

We report descriptive summary analyses of demographic and behavioural characteristics based on each patient's first visit to a sexual health clinic; differences between groups were assessed in χ2 tests. First‐test positivity for an STI was defined as the proportion of patients with positive results at their first clinical visit, using anonymous linkage to more accurately identify initial consultations.11 First‐test positivity is useful for estimating the prevalence of STIs among clinic patients; by focusing on individuals, it reduces the effects on estimates of clinical engagement and repeat testing.13

Differences between patient groups in rates of test positivity were assessed by univariate logistic regression. First‐test positivity was stratified by 2‐year periods because of small numbers in some groups, and temporal changes assessed in Wilcoxon rank‐sum tests. As each first clinical encounter was assigned to the period in which it took place, each patient contributed one data point during the study period.

To assess factors associated with STIs, test results for first visits were combined in the single category of “bacterial STI infection” as the outcome variable in a multiple logistic regression; demographic and behavioural variables were included in the model if the associated unadjusted P ≤ 0.10. We conducted two multivariable analyses: the first assessed factors associated with infection in transgender patients; the second also included transgender status as a predictor variable. This analysis was not conducted for HIV infections because the number of positive test results was low. All analyses were conducted in Stata 14.0 (StataCorp); P < 0.05 was deemed statistically significant.

ACCESS was reviewed and approved by the human research ethics committees of the Alfred Hospital, Melbourne (reference, 248/17), the Menzies School of Health, Darwin (reference, 08/047), and, representing the interests of LGBTQI+ people, the AIDS Councils of New South Wales (reference, 2015/14) and Victoria (reference, VAC REP 15/003).

The differences in positivity rates between trans‐ and cisgender patients suggest that transgender men and women have sexual health risk profiles that differ from those of cisgender people, consistent with the findings of some behavioural studies.14,15,16 Further investigation is needed to understand the sexual behaviours and networks of transgender people in Australia and how they influence STI risk.

The prevalence of gonorrhoea has increased over the past decade among transgender women attending sexual health clinics, but not transgender men. This change illustrates why we need to move beyond including all transgender people in a single category, as epidemiologic differences such as this require different responses for reducing infection and delivering appropriate sexual health care.

We have provided the first national epidemiologic account of STIs in transgender people in Australia, and also one of the most comprehensive studies of its kind internationally. However, we were unable to account for gender‐diverse people (eg, gender non‐binary or agender people). Second, our multivariable analysis of bacterial STI rates did not include condom use or the numbers and genders of sexual partners as factors, each of which influence risk but were poorly recorded for transgender patients. Third, given the limited number of new cases of HIV infection we identified, methods other than sentinel surveillance are required to assess HIV prevalence among transgender people. Finally, as the clientele of sexual health clinics are people at greater risk of STIs than the general population,20 our findings may not be generalisable to all transgender and cisgender people.

While we did not find as markedly higher levels of STIs in transgender people as have been reported overseas,6 some significant differences from cisgender people were evident. Understanding the sexual practices and identities of transgender and gender‐diverse people therefore requires further investigation, particularly in the face of rising STI rates in Australia. 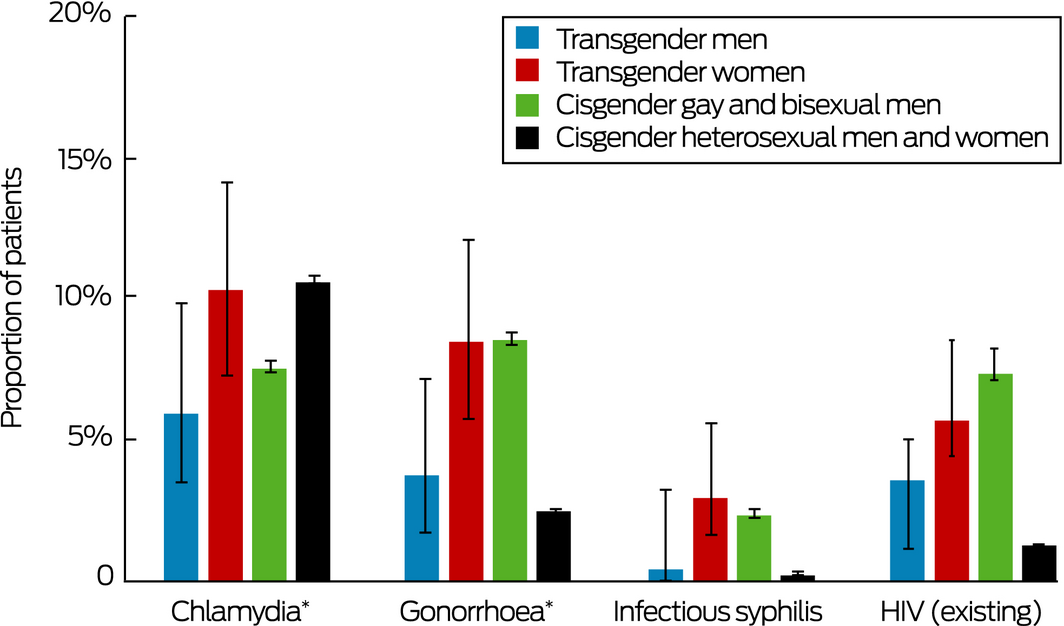 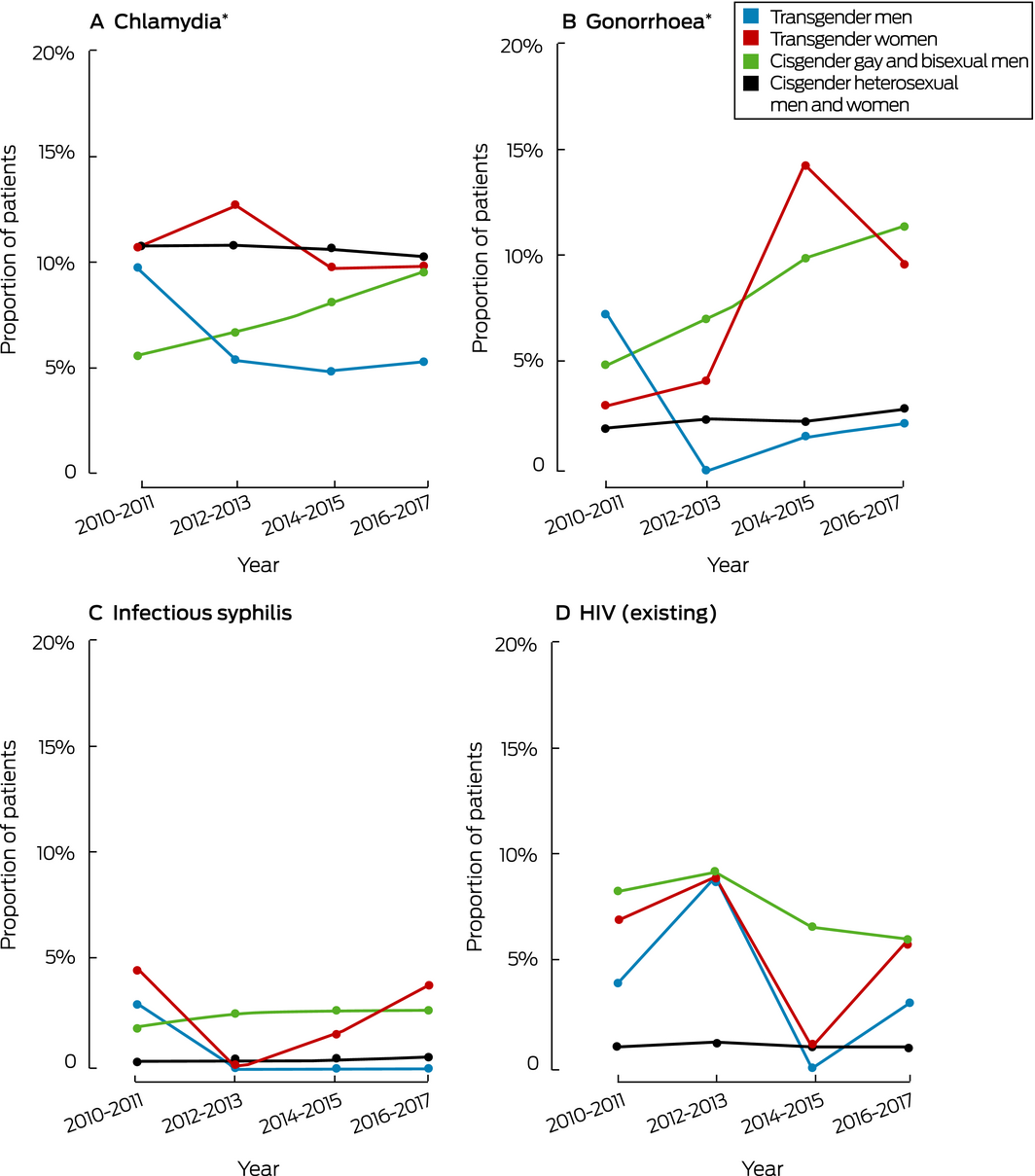 ACCESS receives funding from the Australian Department of Health. We thank Tobias Vickers for his support with extracting and preparing the data for this analysis. We also acknowledge the ACCESS chief investigators who are not authors on this article, Mark Stoove and Carol El‐Hayek. Finally, we thank the clinical staff who supported the extraction and interpretation of ACCESS data.