Objectives: To estimate detection measures for tomosynthesis and standard mammography; to assess the feasibility of using tomosynthesis in population‐based screening for breast cancer.

Participants: Women at least 40 years of age who presented for routine breast screening between 18 August 2017 and 8 November 2018.

Two‐dimensional (2D) x‐ray mammography is the only public health strategy officially endorsed for population breast screening with the aim of reducing breast cancer mortality.1,2,3 Digital breast tomosynthesis, or three‐dimensional (3D) mammography, has recently been introduced as an alternative screening modality. In tomosynthesis, a series of low dose x‐ray images of the breast are obtained from a range of angles, from which millimetre‐thick cross‐sections are constructed for sequential viewing. This approach reduces a problem encountered with standard mammography: overlapping breast parenchyma can both obscure breast cancers and simulate the appearance of abnormalities, consequently increasing the likelihood of false negative and false positive findings.4,5,6 Prospective non‐randomised trials in European screening programs have found that employing tomosynthesis in addition to or instead of 2D‐mammography increases the detection of breast cancers by 2.2 to 2.7 instances per 1000 screens.5,6,7 Randomised trials comparing tomosynthesis and standard mammography screening are underway overseas,8 but whether tomosynthesis screening has an incremental health benefit is not yet known.1,6

Tomosynthesis is used in some radiology services and breast centres in Australia, but it is not endorsed for screening by the national screening program, BreastScreen. We report the first population‐based pilot trial of digital breast tomosynthesis screening in Australia. In this prospective trial, embedded in the BreastScreen Victoria program, we assessed detection measures and the feasibility of implementing tomosynthesis screening, and provide data from the local screening program to inform evaluation of this new mammography technique.

The main aims of our prospective trial were to estimate screening detection measures (cancer detection and recall rates) for standard and tomosynthesis screening, and to determine the feasibility of tomosynthesis breast screening in Australia by investigating its implementation in a population‐based screening service and examining selected secondary outcomes.

BreastScreen targets women aged 50–74 years, but also allows women aged 40–49 years and older women to be screened. All women who presented to Maroondah BreastScreen for breast screening were invited to participate in the study. A trial‐specific information sheet (Supporting Information) was provided in the pre‐attendance information package for women who had booked a screening appointment and to women who presented for screening. BreastScreen services provide written information about screening and require written consent from participants, and trial‐specific information and consent forms were integrated into the BreastScreen information processes. Women were informed that they could be screened by tomosynthesis or standard mammography; women who opted not to undergo tomosynthesis were automatically assigned to standard mammography. Women unable to provide consent for routine mammography screening were deemed ineligible for the study.

For tomosynthesis screening (3D mammography), two‐dimensional images were also synthesised from the x‐ray images of the breast (Selenia Dimensions 8000, with C‐View 2D software, Hologic). Screen‐readers viewed both the 3D and 2D images. Tomosynthesis has been available at Maroondah BreastScreen since 2013 for assessing screening‐detected abnormalities. Routine mammography was performed with one of two units (Selenia Dimensions 8000, Hologic; Mammomat Inspiration, Siemens). In both techniques, mediolateral oblique and cranio‐caudal views of each breast were obtained. Screen reading time — the time between a radiologist opening a woman's images for reading and their recording the screening outcome (clear or recall) — was measured automatically.

All other aspects of screening, screen reading and assessment, and follow‐up were based on the National Accreditation Standards of BreastScreen Australia.9 Findings deemed suspicious at assessment were investigated by image‐guided needle biopsy (including tomosynthesis‐guided biopsy when required). The routine BreastScreen practice of double reading (two independent readings per screen), was followed; disagreements between readers were resolved by a third, independent read. Seven radiologists assessed screens from both arms of the trial; each had about 5 years’ clinical experience in using tomosynthesis to assess mammography‐detected findings and had received additional training in tomosynthesis screen reading before the trial commenced. Further information on the preparation of the service for the trial is included in the online Supporting Information.

The primary outcomes were the number of detected cancers and the cancer detection rate (CDR), based on the results of excision histology (for women who underwent surgery), and the number and proportion of recalls, based on the complete screen assessments for women who were recalled, including details on work‐up imaging and needle biopsy histology results when applicable. Secondary outcomes, evaluated for assessing the feasibility of tomosynthesis for routine breast screening, were acceptability to women (proxy measure: opting out of tomosynthesis) and screen reading time. Further secondary outcomes included the characteristics of detected cancers (size, histology, grade, node status, biomarkers). An interim analysis of radiation dose estimates was also undertaken (Supporting Information).

The characteristics of the screened women in the two screening groups were compared in Fisher exact tests (proportions) or independent samples t tests (continuous data). CDRs and proportions of recalls were computed for each screening modality, with exact (Clopper–Pearson) 95% confidence intervals (CIs); differences between groups were calculated, with Miettinen–Nurminen 95% CIs. Results were stratified by screening round (first [prevalent] screen or subsequent [incident] screen) and by age group.

Sensitivity analyses assessed whether excluding second screens for individual women during the study period or excluding women who reported symptoms at the time of screening (lump or “lumpy”, nipple change or discharge, pain or tenderness, non‐specific symptoms) influenced the estimated CDRs or recall proportions or between‐group differences in these estimates. Screen reading time and cancer characteristics were summarised as descriptive statistics. Analyses were conducted in SAS 9.4 (SAS Institute).

From 18 August 2017 to 8 November 2018, 10 146 women presented to Maroondah BreastScreen for 10 184 screening examinations (38 women undergoing annual screening each had two screens during the trial): 5018 tomosynthesis and 5166 mammography screens. A total of 508 women (5.0% of screens) opted not to undergo tomosynthesis screening (Box 2).

Surgical treatment was recommended to all 83 women in whom breast cancers were detected. Surgical biopsy was also recommended for nine tomosynthesis‐screened and two mammography‐screened women, all of whom were found to have benign conditions.

Our pilot trial was not designed to allow statistical comparisons of CDRs for tomosynthesis and standard mammography; our aim was to provide robust preliminary CDR estimates for tomosynthesis screening for informing decisions about larger evaluations. Nonetheless, the higher estimated CDR for tomosynthesis (an extra 3.2 [95% CI, –0.32 to 6.8] detections per 1000 screens) suggests that the newer technique detects more breast cancers. The lower mean age and higher proportion of first screens in the tomosynthesis arm than in the control arm of the trial would be expected to have opposing effects on CDR (lower rates for younger women, higher rates for first screens). Stratified analyses indicated, however, that estimated CDRs were similar for first and incident screens in the tomosynthesis group. The between‐group difference in CDR was greater for incident (subsequent) than first (prevalent) screens, and it is notable that 71 of 83 breast cancers identified in the two groups during the trial were identified by incident screens. We also found that the between‐group difference in CDR for women aged 60 years or more (7.0 [95% CI, 1.1–14] more detections per 1000 screens with tomosynthesis) was similar to the finding of a European tomosynthesis trial (4.0 more detections per 1000 screens of women aged 60 years or more).5 Our stratified results indicate that it is unlikely that differences between the two study arms in mean age or the proportion of first screens affected our findings. Further, excluding data for women who reported breast‐related symptoms did not substantially alter our estimates of CDR or differences in CDR.

A greater number of invasive breast cancers were detected by tomosynthesis than by standard mammography (and the proportion of grade 1 cancers was higher); tomosynthesis also detected more ductal carcinomas in situ (including low and intermediate grade carcinomas). However, the numbers of detected breast cancers were too small for meaningful statistical comparisons. While initial studies suggested that the increased detection rate of tomosynthesis mostly involved invasive breast cancer,6,7,10,11 our results are similar to the preliminary findings of a more recent randomised controlled trial which found that tomosynthesis increased the detection of both invasive and in situ malignancies.8 More frequent cancer detection by tomosynthesis screening than in standard 2D mammography could indicate that it is more sensitive than standard mammography, but if it reflects increased detection of indolent malignancy it may not be associated with improved health outcomes. The International Agency for Research on Cancer has deemed the evidence that tomosynthesis reduces interval cancer rates inadequate; further, the available evidence is insufficient to determine whether the reduction in breast cancer mortality achieved by screening is greater for tomosynthesis screening than standard mammography.1 Our pilot trial cannot fill these evidence gaps, which will require substantially larger studies with longer term end points.

As BreastScreen Australia does not routinely report mammographic breast density, we did not measure it in our trial, but it may be possible to derive this information from archived imaging data in order to report density‐related screening outcomes, which would be useful given the recent discussion of breast density notification legislation.12

The increased radiation exposure associated with tomosynthesis identified in our interim dosimetry report (Supporting Information, table 2) also needs careful consideration before adopting it for routine screening. The imaging data and information infrastructure (including image display and archiving) is another important aspect. Careful planning enabled modifications that supported implementation of tomosynthesis in this pilot trial, but substantial changes would be needed to facilitate its use in a high volume population screening program, and would be subject to a thorough health economics evaluation.

Our pilot study did not have sufficient power to allow assessment of the statistical significance of the differences in CDR between the two screening modalities, or for assessing differences in interval cancer rates. These endpoints would require larger studies with adequate follow‐up of screened women to identify interval cancers. We inferred acceptability of tomosynthesis for women from the proxy measure of opting out of tomosynthesis; acceptability would ideally be assessed more directly in screened women.

Our pilot trial of tomosynthesis screening in a BreastScreen service found that breast cancer detection and recall rates were higher than for standard mammography. Tomosynthesis entailed longer screen reading times and exposure to higher radiation doses than standard mammography, and also required additional infrastructure. Higher detection rates for both invasive and in situ breast cancers indicate that tomosynthesis screening could have health benefits for women or lead to overdiagnosis of malignancies. Our trial provides findings that could be further examined in larger, multi‐service comparisons of tomosynthesis with standard mammography for breast screening, including longer term endpoints (such as interval cancer rates) that were beyond the scope of our pilot study. The balance between the incremental benefit and harms of this new technology must be carefully assessed to ensure that BreastScreen provides the most effective form of screening to Australian women. 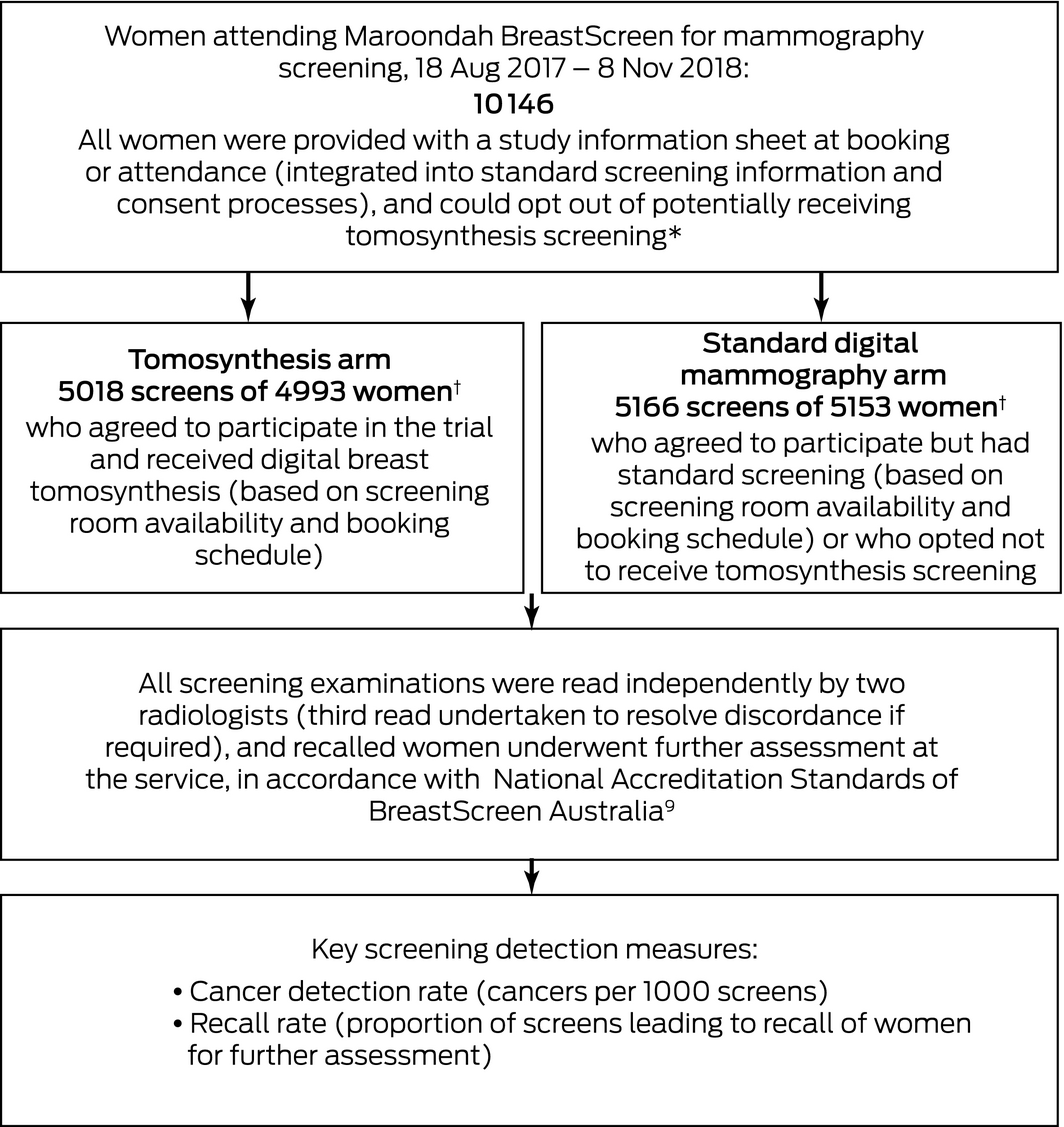 * Reception staff checked whether each woman had received trial information and verified their consent; a laminated study information sheet was also displayed in the reception area where women wait to be called in for screening. The radiographer could provide additional information about the trial if requested. †Thirty‐eight women who were screened annually had two screening episodes each during the trial.

Box 3 – Screening recall: number of screened women who were recalled for further assessment, by screening modality

The study was funded by a National Breast Cancer Foundation (NBCF) Australia pilot study grant. Nehmat Houssami is funded by an NBCF Breast Cancer Research Leadership Fellowship. We thank Sue Viney and John Heggie for important contributions to our study. We thank the radiology, radiography, data and administrative staff at Maroondah BreastScreen, and also thank the information technology staff, the client communications and recruitment team, and the data management staff at BreastScreen Victoria for helping us implement the trial. We thank the women who attended Maroondah BreastScreen and participated in the study.