Objectives: To characterise the people retrieved by the Royal Flying Doctor Service (RFDS) for treatment of mental and behavioural disorders, and to assess mental health care provision in rural and remote areas.

Setting, participants: RFDS aeromedical retrievals of patients from anywhere in Australia except Tasmania during 1 July 2014 – 30 June 2017 for the treatment of mental or behavioural disorders.

Conclusion: Mental and behavioural disorders are an important problem in rural and remote communities, and acute presentations trigger a considerable number of RFDS retrievals.

The known: Emergency aeromedical retrievals of people with mental health problems from rural and remote areas of Australia have not been investigated in detail.

The new: During 2014–2017, the Royal Flying Doctor Service (RFDS) transported 2257 patients from rural and remote locations to large towns and cities for the treatment of mental and behavioural disorders. The major working diagnoses for these patients were schizophrenia, bipolar affective disorder, and depression.

The implications: The dearth of dedicated clinical mental health support and intervention services in remote Australia dissuades many people from seeking help until they are in crisis.

Rural and remote areas have fewer health services than metropolitan areas,7,8,9,10,11,12 including considerably fewer psychologists and psychiatrists.11,12 The comparative lack of support for mental health services in these communities has been attributed to lower numbers of people at risk, and to their not seeking assistance except during crises or after moving to metropolitan areas for definitive management.

The reasons for transferring rural and remote patients from their communities to metropolitan hospitals for treatment of mental and behavioural disorders have not been well investigated. In particular, we believe that the number of aeromedical retrievals by the Royal Flying Doctor Service (RFDS) of people with mental and behavioural disorders, especially of younger patients, has increased over the past three years, but little has been published on this question.

The primary aims of our study were to describe the types of mental and behavioural disorders for which people are retrieved by the RFDS, to provide basic epidemiologic data about these patients (numbers, age, sex, Indigenous status), and to assess the availability of mental health care by RFDS and non‐RFDS services in rural and remote areas. Our goal was to provide a comprehensive picture of the mental health problems and complications experienced by rural and remote Australians that precipitate acute aeromedical transfers to metropolitan centres.

We undertook a prospective review of routinely collected data to determine the types of mental and behavioural disorders leading to aeromedical retrieval of patients by the RFDS, the basic demographic features of these patients, and the rural and remote retrieval locations and the major city destinations involved. We included data for all patients who were retrieved during the three years 1 July 2014 – 30 June 2017 by the RFDS from anywhere in Australia (except Tasmania) for the treatment of mental or behavioural disorders (International Statistical Classification of Diseases and Related Health Problems, tenth edition [ICD‐10], chapter V).

Data recorded electronically included patient demographic information and medical history, aeromedical working diagnosis, locations of retrieval and receipt, and service provider and type. Multiple transfer legs were combined as single episodes of care for analysis. Patient data collection forms and systems differ between RFDS sections and operations, but all collect data for the same variables. Most information (including diagnoses) was collected freehand during the RFDS flight and later transferred to electronic databases; the working diagnosis was re‐coded according to ICD‐10 categories.

“Rural and remote area” was defined as including all areas outside major cities according to the Australian Statistical Geography Standard Remoteness Areas (ASGS‐RA) classification system.14

We determined mental health service coverage with the RFDS Service Planning and Operational Tool (SPOT) for exploring health care coverage in rural and remote Australia. Based on the geographic distribution of demand and the set of health care facilities that provide a range of corresponding services, SPOT calculates the level of demand covered by those facilities for people within a specified distance; for example, within one hour's drive by motor vehicle. Demand includes population levels of demand in certain categories (eg, mental health services) as well as some specific RFDS demand types (retrievals).

We report our data as summary descriptive statistics. All statistical analysis was conducted in Excel (Microsoft) and the software package R 3.5.1 (R Foundation for Statistical Computing). Retrieval and receiving sites were mapped with ArcMap (Environmental Systems Research Institute) and Tableau mapping software.

Most patient transfers were from rural and remote regions to metropolitan areas (Box 6). The most frequent rural and remote retrieval communities were Port Augusta (138 retrievals), Port Pirie (96), Mount Gambier (79) and Port Lincoln (79) in South Australia, and Mount Isa in Queensland (74). Most receiving sites were metropolitan and inner regional cities, including Adelaide (803 retrievals), Perth (275), Cairns (188), Alice Springs (182), and Townsville (134).

Mental health care provision by non‐RFDS services was considerably more restricted in rural and remote areas than in metropolitan areas; for example, 723 of 1029 FPS‐trained general practitioners were located in major cities (70.3%), 282 (27.4%) in inner and outer regional areas, and 24 (2.3%) in remote and very remote areas.

The RFDS provided general practitioner and nursing fly‐in‐fly‐out clinics in areas with markedly lower levels of non‐RFDS mental health services, where the RFDS was often the only service provider. Most patients in rural and remote areas would need to travel by motor vehicle for more than 60 minutes to reach the nearest RFDS or non‐RFDS mental health services (many of these services are also general practitioner or nurse‐led clinics) (Supporting Information, figure). The highest population regions in which coverage by non‐RFDS mental health clinical services is limited are listed in the table in the online Supporting Information.

Rural and remote patient aeromedical care transfers for mental and behavioural illnesses have been little investigated. The leading causes for RFDS mental health retrievals were of patients transferred from rural and remote to metropolitan areas for more definitive care for schizophrenia, bipolar affective disorder, or depression.

These results are consistent with our earlier finding11 that many RFDS retrievals are from areas that have low levels of health services. The numbers of general practitioners, psychiatrists, psychologists, mental health nurses, and social workers are low in many rural and remote areas, as are those of emergency departments and hospitals.11

The rates of general practitioner‐prepared mental health treatment plans are much lower in rural and remote areas than in metropolitan areas.16 This may be partly explained by the fact that many rural and remote areas receiving block funding for mental health care services. Further, the dispensing rates of Pharmaceutical Benefits Scheme‐listed psychotropic medications are lowest in remote areas, probably because of the scarcity of pharmacies. For instance, the dispensing rates for antipsychotic agents are similar in inner (13 503 [low socio‐economic status areas] to 22 683 prescriptions [high socio‐economic status areas] per 100 000 people aged 18–64 years) and outer regional areas (13 702 to 20 407 per 100 000) to those in major cities (14 299 to 20 151 per 100 000), but they are markedly lower in remote communities (6910 to 10 768 prescriptions per 100 000).16 Antipsychotic medications are important for treating schizophrenia and related disorders, but are rarely sufficient as sole therapy.17

The hospitalisation rates and harms associated with misuse of amphetamine‐type stimulants (included under F15 in ICD‐10) are increasing in rural and remote areas,6,19 but retrieval rates for people with F15‐related diagnoses accounted for only 15 mental health‐related retrievals, or 8% of substance misuse‐related specific diagnoses. Some amphetamine‐type stimulant users may have been diagnosed with multiple substance misuse (F19), the most frequent substance misuse‐related diagnosis, as multiple substance misuse and dependence is common in this group. Not unexpectedly, alcohol misuse (F10) was the second most frequent primary substance misuse‐related diagnosis. Although many rural and remote areas have drug and alcohol services, they are usually limited to outpatient services (eg, counselling), and often lack medical and psychiatric expertise and resources.20 Many patients in rural and remote areas must travel more than 60 minutes to reach acute general medical services, and those who need more intensive acute psychiatric or addiction care may be referred for aeromedical retrieval to obtain definitive care or to exclude other organic causes.

The prevalence rates of mental disorders in rural areas cannot be deduced from RFDS retrieval data, as the need for retrieval is related to acuity of presentation rather than to overall hospital admission rates for these conditions. Whether rates of substance misuse disorders, in particular, are different in metropolitan and remote locations is a difficult question21 that cannot be resolved by our study.

Retrievals of people with substance misuse disorders and their subsequent hospital outcomes should be further investigated. Aeromedical retrieval for managing acute exacerbations of such conditions seems a costly and ineffective approach; comparing hospital length of stay data associated with these retrievals with the costs of community‐based services in areas with high retrieval rates would be appropriate. Whether regional factors influence retrieval outcomes should also be examined, as local variances in population characteristics and densities could result in differences in retrieval diagnoses.

The primary limitations were that only primary diagnoses were available, and that ICD‐10 diagnoses were not provided for 39.4% of retrievals; further, diagnoses were made by medical flight crew. Data for Tasmania were unavailable, and the RFDS undertakes only limited aeromedical retrievals in the Top End of the Northern Territory, where other organisations provide aeromedical services. As we only recorded the primary diagnostic reason for aeromedical retrievals and not the patient’s other conditions, we may have underestimated the burden of illness and complexity of the patients retrieved by the RFDS.

The RFDS provides extensive aeromedical support for patients suffering mental and behavioural disorders, including many retrievals for treating the effects of psychoactive substance misuse; many were associated with multiple drug and alcohol misuse in people under the age of 19. The availability of RFDS and non‐RFDS mental health clinical support is lower in most of the retrieval communities than in major cities. In the absence of access to local dedicated mental health support and intervention services, many patients seek clinical assistance only when in crisis. 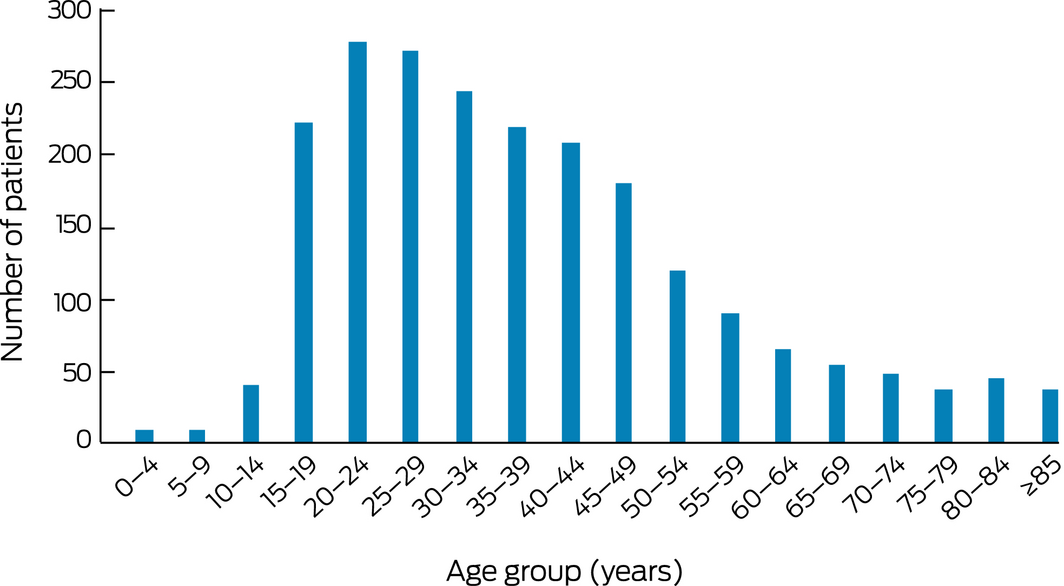 Box 4 – Age distribution of 194 patients with psychoactive substance use problems transported by the Royal Flying Doctor Service, 2014–15 to 2016–17 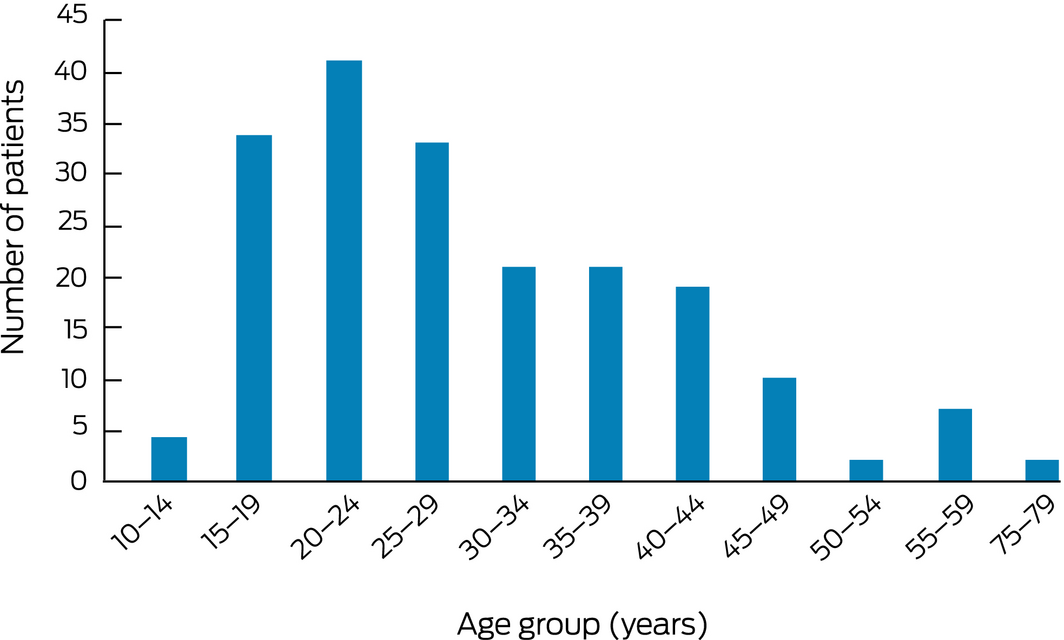 Box 6 – Aeromedical retrieval and transfer sites for patients with mental health problems transported by the Royal Flying Doctor Service, 2014–15 to 2016–17 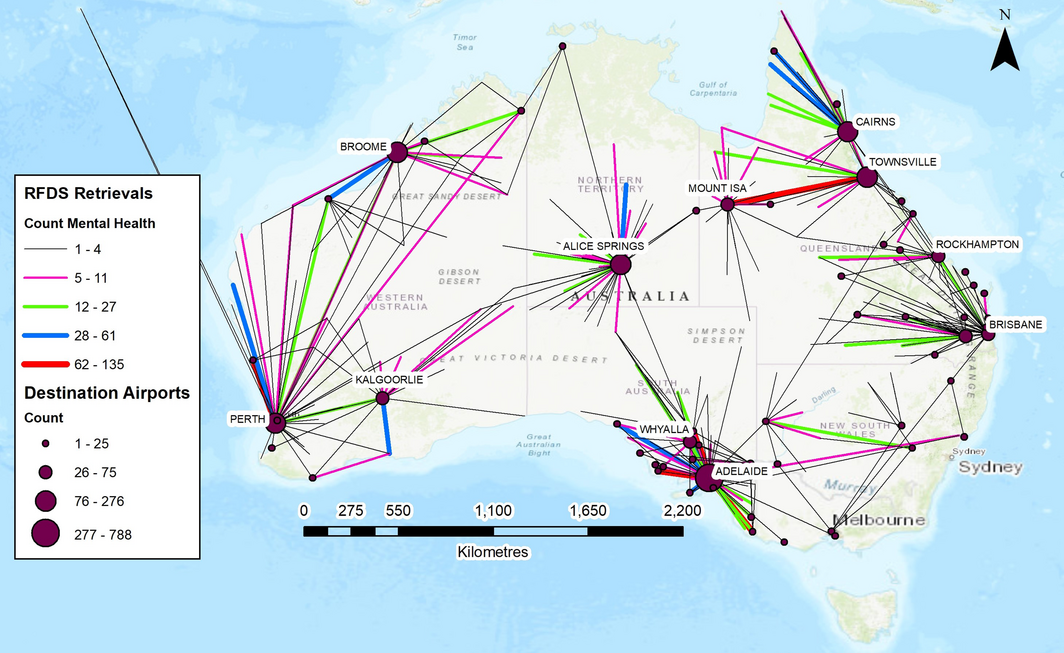 We thank the employees and supporters of the RFDS who made this research possible. We also acknowledge the RFDS sections and operations throughout Australia for their contributions to this study.