The international shortage of piperacillin/tazobactam (PT) in 2017 prompted its replacement by intravenous amoxicillin/clavulanate (IVAC).1 Two studies have examined the effect of broad spectrum antibiotic usage on the epidemiology of vancomycin‐resistant Enterococcus (VRE) in hospitals. An interrupted time series study found that VRE prevalence declined after partial replacement of cephalosporins, vancomycin and clindamycin by ampicillin/sulbactam and, to a lesser extent, PT.2 In another study, a switch from ceftazidime to PT for febrile neutropenia was associated with reduced VRE acquisition in a haematology unit.3

We examined the impact of the PT shortage on VRE and methicillin‐resistant Staphylococcus aureus (MRSA) acquisitions at the John Hunter Hospital (Newcastle), where there has been a sustained outbreak of VRE since 2014.4 We compared the incidence of hospital‐onset acquisitions (hospital‐wide) during the 12 months before (Oct 2016 – Sept 2017) and 12 months after (Nov 2017 – Oct 2018) the start of the PT shortage. We analysed routine surveillance data; the first unique patient VRE and MRSA isolates from blood, tissue or fluid specimens were deemed indicators of morbidity. The interrupted time series was analysed in a regression framework with a generalised linear model; changes in usage trends and levels, adjusted for seasonality, were assessed. Structural breaks in the series were explored with a blinded generalised fluctuation test.

Ethics approval was not required; we observed the guidance of the Outbreak Reports and Intervention studies of Nosocomial infection (ORION) statement.5

VRE and MRSA acquisitions and infections fell during the period of reduced PT use, although only the former was statistically significant. Replacement with broad spectrum agents was largely avoided. The introduction of a new cleaning wipe in February 2018 was the only significant change in practice at the hospital during the study period, during which hand hygiene compliance exceeded 90%. Exposure to PT or cefepime in intensive care has been associated with similar risks of VRE acquisition;6 investigations of the impact of IVAC on the risk of acquiring VRE or MRSA have not been published.

National Antimicrobial Utilisation Surveillance Program7 data for Australian tertiary hospitals documented an overall fall in PT use, from 60 to 41 DDD/1000 OBDs, during the shortage; mean broad spectrum use remained unchanged, as PT was replaced by ceftriaxone, cefepime and meropenem. In our experience, these agents are often used empirically in situations in which narrower spectrum agents could be safely employed, including intra‐abdominal infections for which prompt source control has been achieved, skin or soft tissue infections dominated by Gram‐positive bacteria, and pneumonia in patients at low risk of Gram‐negative infections.

We found that reducing broad spectrum antibiotic use was associated with reduced VRE transmission and infection. PT has now been re‐introduced on a restricted basis and usage remains at a much lower level than before the shortage. We will continue to observe trends in incidence and will also undertake a case–control study of VRE acquisitions. Reducing broad spectrum antibiotic use should be a primary goal for hospital antimicrobial stewardship programs. 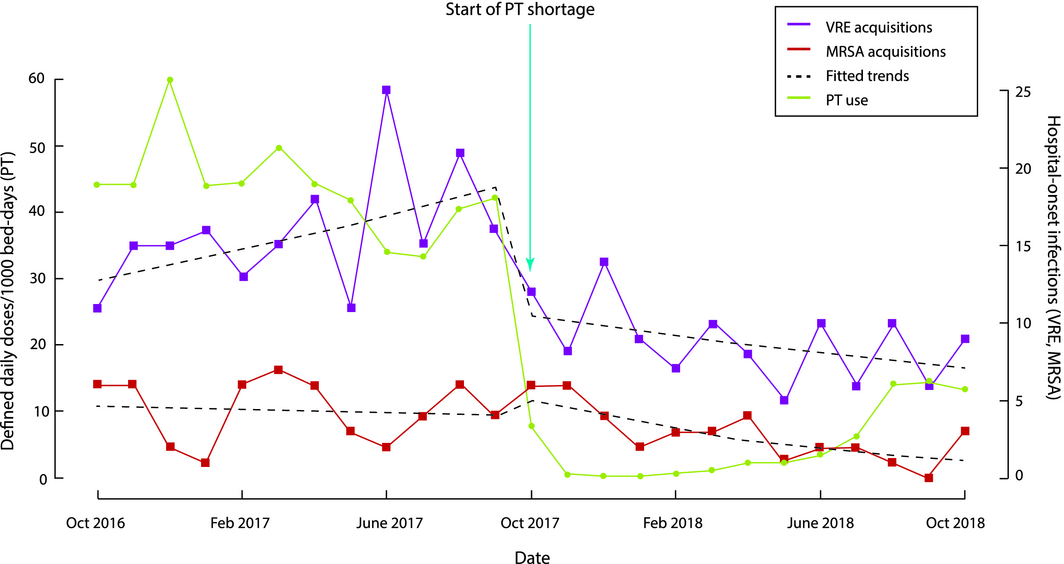 We thank Lorrae Gilbert (antimicrobial stewardship pharmacist) and Michelle Kennedy and Jeffrey Deane (infection control nurses responsible for multidrug‐resistant organisms and C. difficile surveillance) for their involvement in this study.