Objectives: To determine trends in and predictors of early treatment for people newly diagnosed with human immunodeficiency virus (HIV) infection in Australia.

Conclusions: The proportion of people newly diagnosed with HIV in sexual health clinics in Australia who received treatment within 6 months of diagnosis increased from 17% to 53% during 2004–2015, reflecting changes in the CD4+ cell count threshold in treatment guidelines. Nevertheless, further strategies are needed to maximise the benefits of treatment to prevent viral transmission and morbidity.

The known Treatment of people infected with human immunodeficiency virus (HIV) soon after diagnosis reduces the risk of transmission and HIV‐related morbidity. The proportion and characteristics of people who receive early treatment are not well described.

The new The proportion of patients attending major Australian sexual health clinics who started treatment within 6 months of diagnosis increased during 2004–2015 from 17% to 53%. The rise reflected changes in CD4+ cell count thresholds in treatment guidelines.

The implications Our findings provide a baseline for assessing the impact of early treatment for all newly diagnosed patients, regardless of CD4+ cell count.

The United Nations has set itself the ambitious goal of eliminating the epidemic of acquired immunodeficiency syndrome (AIDS) by 2030. Many countries are aiming to achieve this by striving for the “90–90–90” treatment target: 90% of people living with the human immunodeficiency virus (HIV) should know their status, 90% of people diagnosed with HIV infection should receive treatment, and 90% of treated people should achieve virological suppression.1 The evidence base for this major shift in the focus of prevention was provided by the 2011 HPTN 052 multicentre randomised controlled trial, in which the risk of HIV transmission to partners of heterosexual people who started treatment early (at CD4+ cell counts of 350–550 cells/μL) was 96% lower than for people for whom treatment was delayed (CD4+ count below 250 cells/μL).2 Further, observational studies of cohorts of same and opposite sex couples have found that HIV was not transmitted by people with sustained viral suppression,2,3 and community‐level studies have reported that greater treatment coverage is associated with lower incidence of HIV infections.4

Starting treatment during the early stages of infection was also found to be beneficial in the international Strategic Timing of Antiretroviral Treatment (START) randomised clinical trial.5 The 2016 Australian HIV management guidelines6 recommend initiating treatment as soon as possible after diagnosis, regardless of CD4+ cell count, in order to reduce the risk of morbidity (including Pneumocystis jiroveci pneumonia, cerebral toxoplasmosis, pulmonary tuberculosis, Kaposi sarcoma, and HIV wasting syndrome), and some local recommendations (eg, in New South Wales7) encourage initiating therapy within 6 weeks of diagnosis.

Until 2012, US guidelines recommended delaying the initiation of therapy, balancing immune preservation and virological suppression on the one hand and treatment‐related morbidity and mortality on the other. Until late 2007, antiretroviral treatment was recommended when the CD4+ cell count fell below 200 cells/μL.8 This threshold was raised when concerns about the toxicity of treatment eased, supported by large cohort studies that found clinical outcomes were improved when treatment commenced earlier (2008, fewer than 350 cells/μL in asymptomatic people;9 after 2009, fewer than 500 cells/μL10).

To monitor progress towards the 90–90–90 target at the population level, most countries measure coverage of HIV testing, treatment, and viral suppression with the “HIV care cascade” model, in which data from several cross‐sectional administrative data sources are compiled.11 In countries such as Australia, where HIV treatment coverage for people diagnosed with HIV infection is good (84%),12 such cascades do not assess the uptake of recommendations for initiating HIV treatment as soon as possible after diagnosis.13 Cascades do not provide detail on determinants of the rate of progression through the continuum of care, nor on predictors of the early initiation of treatment.

Australia has a concentrated HIV epidemic: 70% of the approximately 1000 HIV diagnoses each year are in homosexually or bisexually active men (men who have sex with men, MSM).12,14 Annual community survey data indicate that HIV prevalence among gay men exceeds 7%.12,15 About half the infections in MSM newly diagnosed with HIV in NSW are detected by testing in sexual health clinics.16

We analysed data from sexual health clinics participating in the Australian Collaboration for Coordinated Enhanced Sentinel Surveillance of Sexually Transmissible Infections and Blood‐borne Viruses (ACCESS) program.17 ACCESS includes 44 of the largest sexual health clinics in Australia, with centres in all states apart from South Australia.18 The clinics collect data in computerised medical record systems as part of routine care; de‐identified line‐listed data are regularly transferred to the Kirby Institute in Sydney.

Patients were included if the ACCESS program recorded that they were newly diagnosed with HIV infection between 1 January 2004 and 30 June 2015 (cohort censoring date: 31 December 2015). Patients were followed for a maximum of 183 days (6 months) after diagnosis. Patients were excluded from the primary analysis if their initial CD4+ cell count was not recorded, there was a record of HIV management at another service, or their CD4+ cell count was not monitored further and antiretroviral therapy was not commenced at the service within 390 days (one year, consistent with the international definition of “retention in care”,19 plus one month).

The primary outcome was early treatment, defined as antiretroviral therapy initiated within 183 days (6 months) of diagnosis with HIV infection. Treatment initiated after 6 months was defined as late treatment.

Variables included in the analysis

Patient characteristics were tabulated by period of diagnosis. Differences in categorical covariates were assessed in χ2 tests; trends in median values were assessed with the Cuzick method.22

The probability of early treatment was assessed in mixed effects logistic regression models with robust variance calculations; “clinic” was included as a random effect because of the clustering of patient data by clinic. Univariate models for the variables listed above were fitted. Potential interactions between CD4+ cell count at diagnosis and demographic, clinical, or risk characteristics with respect to time to treatment were assessed in sensitivity analyses. The associations of covariates with the primary outcome were assessed in Wald tests.

The multivariate model included variables significant in univariate analyses (P < 0.05). Interaction terms were included to evaluate time period‐specific variations in outcomes associated with CD4+ cell count. Goodness of fit was assessed by computing Anscombe residuals by ordered covariate category (not reported). A reduced interaction model including CD4+ cell count and period of diagnosis assessed the effect of changes in guidelines. Predicted probability of early treatment was plotted by CD4+ cell count at diagnosis and time period. In a sensitivity analysis assessing bias associated with excluding patients lost to follow‐up, these patients were re‐classified as receiving “late treatment”. Analyses were conducted in Stata 14.2 (StataCorp).

The proportion of patients newly diagnosed at major Australian sexual health clinics with HIV infection for whom treatment commenced within 6 months of diagnosis increased during 2004–2015 from 17% to 53%. The probability of early treatment for patients presenting with CD4+ cell counts of 350–499 cells/μL increased steadily from 2007–2009, and the probability for patients with counts above 500 cells/μL increased rapidly during 2013–2015. These patterns are consistent with guideline changes during the 12‐year study period. In multivariate analyses, lower CD4+ cell count and higher viral load were associated with early treatment, as was being diagnosed more recently.

During 2004–2006, in keeping with then current treatment guidelines, patients with advanced infection (lower CD4+ cell count at diagnosis) were treated early, but treatment was deferred for those with less advanced disease. By 2013–2015, an increasing proportion of patients with higher CD4+ cell counts were receiving early treatment. Offering antiretroviral therapy to all patients with HIV infections has been recommended in Australia since June 2015.23 While the strength of evidence ratings for the influential US guidelines were upgraded in January 201624 and some Australian physicians will have anticipated the changes, the final period in our study included patients diagnosed before they were published. We therefore expect further increases in the median CD4+ cell count at diagnosis and the pre‐treatment nadir.

No socio‐demographic subgroups, risk factors, or comorbid condition included in our analysis were associated with early treatment after adjustment for CD4+ cell count, viral load and period of diagnosis. In Australia, HIV treatment is subsidised by the Pharmaceutical Benefits Scheme (PBS), relieving financial impediments to treatment, although co‐payments are required in some states. People who have recently migrated to Australia cannot routinely access the PBS; during the study period, an alternative access scheme that provided pharmaceutical company‐supported antiretroviral treatment to such individuals was established at certain sites.25 However, aspects not assessed by our study may have been associated with delayed treatment, such as stigma and other psychosocial factors that are associated with lower rates of treatment coverage and adherence.26,27

First, the clinics in the ACCESS network may not be representative of all sexual health clinics in Australia, nor their clientele of all patients diagnosed in Australia with HIV infection. However, ACCESS includes most large Australian sexual health clinics, and therefore probably also most of the patients diagnosed at Australian sexual health clinics with HIV infections. Second, patients lost to follow‐up soon after diagnosis were excluded from analysis because of the insufficient data on treatment uptake. While loss to follow‐up can indicate disengagement from clinical care (and treatment not being initiated), some patients may have engaged with clinical care at other centres or returned to their home countries for care.28 The median CD4+ cell count of these patients was similar to that for the overall cohort, suggesting that their stage of disease at presentation was also similar. The results of a sensitivity analysis that regarded patients lost to follow‐up as not having received early treatment early were similar to those of the primary analysis.

The proportion of people newly diagnosed in sexual health clinics in Australia with HIV infection who received treatment within 6 months of diagnosis increased from 17% to 53% during 2004–2015, reflecting changes in the CD4+ cell count threshold in treatment guidelines. Our findings provide a baseline for assessing the impact of fully implementing the 2015 Australian guideline recommendations that all newly diagnosed patients should receive early treatment, regardless of CD4+ cell count. They also provide information that will help understand gaps in the cascade of care, including in the response to changes in guidelines, which was independent of patient socio‐demographic characteristics, risk factors, and clinical comorbidity.

Box 4 – Probability of early treatment (with 95% confidence intervals), by CD4+ cell count at diagnosis and period of diagnosis 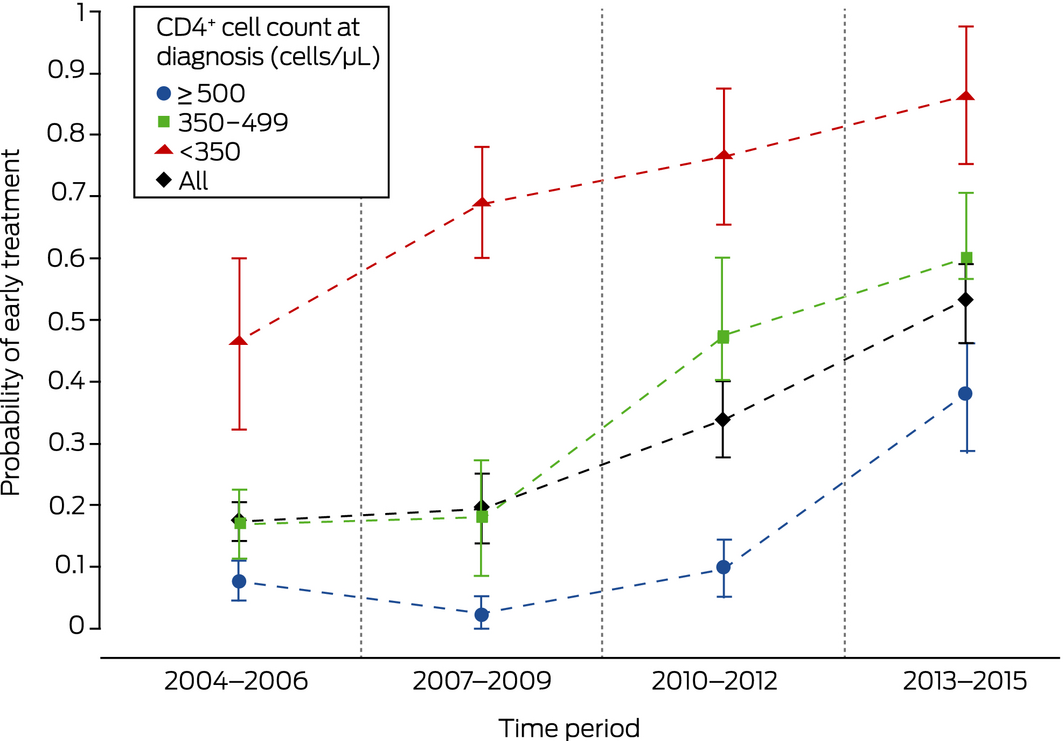