App utility and adoption in a tertiary children's hospital

Paediatric patients with chronic health conditions, such as cystic fibrosis or asthma, are faced with unique challenges in managing their health. One key aspect of effective chronic disease management is building an effective partnership between the patients, their families and the clinical team as the child transitions to adolescence and then adulthood.1 Poor communication with health professionals is consistently identified by patients as one of the key barriers to effective self‐management of their health.2 E‐health technologies, specifically patient‐facing mobile applications (apps) can potentially provide a solution to improving patient–practitioner communication in paediatric settings.

Patient‐facing apps typically enable patients to access their medical records (to varying degrees), manage appointments, and communicate with health care providers. These tools can be operated by health care organisations such as hospitals3 or independently managed through vendors. The two‐way communication afforded by these apps, usually in the form of text message exchanges, increases opportunities for between‐appointment interactions and allows patients and families to ask questions that they may have forgotten during an appointment or were unsure about asking in a face‐to‐face setting. Its textual nature means that the messages are stored and can be reviewed at later dates. This provides patients and families with evidence of increased interaction, and a record of information that can be used in decision making. Digital technologies have the potential to address some of the logistical barriers to accessing care — for example, via telehealth4 — and support young people's transition from childhood to adolescence and adulthood using technology that they already use for accessing health information.5

Despite these opportunities, the implementation of patient portals, with functions similar to those described above, has been met with mixed success. Large hospitals in the United States and United Kingdom which have introduced patient portals have reported low uptake, with 25% and 0.13% of invited patients completing portal registration, respectively.6,7 In most studies, however, patients have reported improved communication with the care team, and overall support for technology‐based access to their personal health information.8

In May 2017, the Sydney Children's Hospitals Network introduced a patient‐ and family‐facing app — the My Health Memory (MHM) app. Its initial functions included the ability to sync appointments with the native phone calendar, and include links to information about the appointment and a telehealth app when requested; an appointment rescheduling function; messaging services; and automated storage of messages sent and received through the app in the patients’ electronic health record (held at the hospital) and in the family's phone (Box 1). Prioritising these features in the first release of the app was a result of consultation with patients, families, and clinical and non‐clinical hospital staff.

The perspectives of patients and their families regarding the impact of the MHM app on patient–practitioner communication were evaluated when the app was first introduced (n = 20; May 2017) and 12 months later (n = 28 for the preliminary analyses reported here) using online surveys. All patients and families who attended clinics that were part of the MHM pilot (cystic fibrosis, asthma and cardiology clinics) were invited to complete both surveys. Hospital staff from these clinics were also invited to share their perspectives before the launch of the app (n = 12; April 2017) via interviews. In this article, we present findings from the pre‐implementation patient and family surveys and the staff interviews, as well as preliminary analyses of the post‐implementation patient and family surveys.

Positive feedback regarding the implementation process was received from patients, and positive responses were received from staff interviewed before the launch. High levels of awareness of the app were reported by 90% of parents surveyed pre‐implementation (18/20). Staff consistently indicated that they had been provided opportunities to be involved in development of the app, but they varied in their uptake of these opportunities due to availability.

During pre‐implementation interviews, hospital staff were overwhelmingly positive about the potential value of the MHM app for enabling communication between families and their health care team. They anticipated that once the app was rolled out across the organisation it would improve how patients and families interacted with the hospital. Despite this, interviewees were uncertain about how the communication feature would affect their relationship with patients and families, and be integrated into the existing multidisciplinary team structure. In contrast, preliminary analyses of post‐implementation surveys showed that despite 48% of patients (10/21) reporting initial technical challenges, 61% of parents (17/28) stated that the app had positively affected their interactions with hospital staff. This led to greater confidence among parents in managing their children's health, and improved care experiences. A summary of the findings is shown in Box 2.

Parents also suggested improvements such as the ability to upload images or other files, request appointments, communicate with several team members simultaneously, and log in using Touch ID. Several of these features are currently on the roadmap for inclusion in the MHM app over the next 12–18 months.

Our findings to date suggest that mobile apps integrated into the care experience can lead to positive outcomes for patients and families who are managing chronic health conditions, provided that there is technical support and clear communication between families and staff. Key to the success of the MHM app is its responsiveness to patient, family and staff needs. The order in which features are introduced is based on patient and family priorities, leading to a positive response despite technical challenges.

Another key factor to the successful implementation of the app was ensuring that clear, institution‐wide processes were established for integrating the app into existing staff workflow. Such processes included transitioning technical support from the app vendor to the hospital's in‐house information and communication technology team, compulsory staff training, and additional personnel to help patients and families get started with using the app. The importance of engaging health professionals in e‐health implementation cannot be understated, as staff concerns about the impact of digital technologies on workload has been repeatedly identified as a barrier to e‐health success. Including staff in the development of the MHM app ensured greater integration with the electronic medical records in which they primarily work, created awareness of how the app is used and its potential to improve the patient experience, and enabled staff to promote the app through their own continued use of it. We have seen that the uptake and continued use of the app relies not only on its functions, but also on the support of our clinical and non‐clinical teams in introducing patients and families to the tool, and using it themselves.

These experiences of the MHM app highlight the need to consider both the functions of an e‐health tool and the strategies for effective implementation. Furthermore, in addition to developing a responsive, technically stable, and well implemented app, the broader health system and support networks should be considered. The MHM app supports patients and families whose care involves a multidisciplinary team of health professionals, educators and social support staff that exists within and outside the hospital. Any successful e‐health tool would need to account for this broader context and be able to be integrated with other systems, such as My Health Record, and be appropriately shared with other members of the patient's care network.

A critical next step is to consider how these apps affect patient outcomes, specifically the role of mediating factors such as patient–practitioner communication and therapeutic alliance. To date, numerous studies have shown the benefits of digital technologies — and apps in particular — on patient outcomes9 but few have explored how the integration of patient‐facing apps in face‐to‐face care influences communication between patients and clinicians, and how this change in communication affects outcomes. There are, however, challenges in designing studies that can convincingly draw a link between the app usage, the patient experience (which it most directly affects) and clinical outcomes. Research has focused on measures such as uptake (ie, frequency of using particular functions),10 changes in frequency of office visits and phone calls,11 and financial impacts for the institution.12 The link between these measures and patient outcomes, however, requires further investigation, especially in the context of patient‐facing apps and patient portals. As such, it is a challenge for researchers in e‐health to conduct a single study that examines the impact of using an app on patient experience and the effect of that impact on patient outcomes.

As a first step toward improving chronic disease management using an e‐health tool, we found that parents reported that using the MHM app made it “easier to communicate with treating staff” leading them to “feel more connected and very well supported”. Such comments reinforce the potential for mobile apps to support patients with chronic health conditions and improve their care experience. For this potential to be realised, support from the health care team is required, a clear and responsive implementation strategy needs to be used, and an understanding of the health and support networks that patients and their families use is essential.

Box 1 – Examples of screenshots from the My Health Memory app, showing some of the initial functions that were included 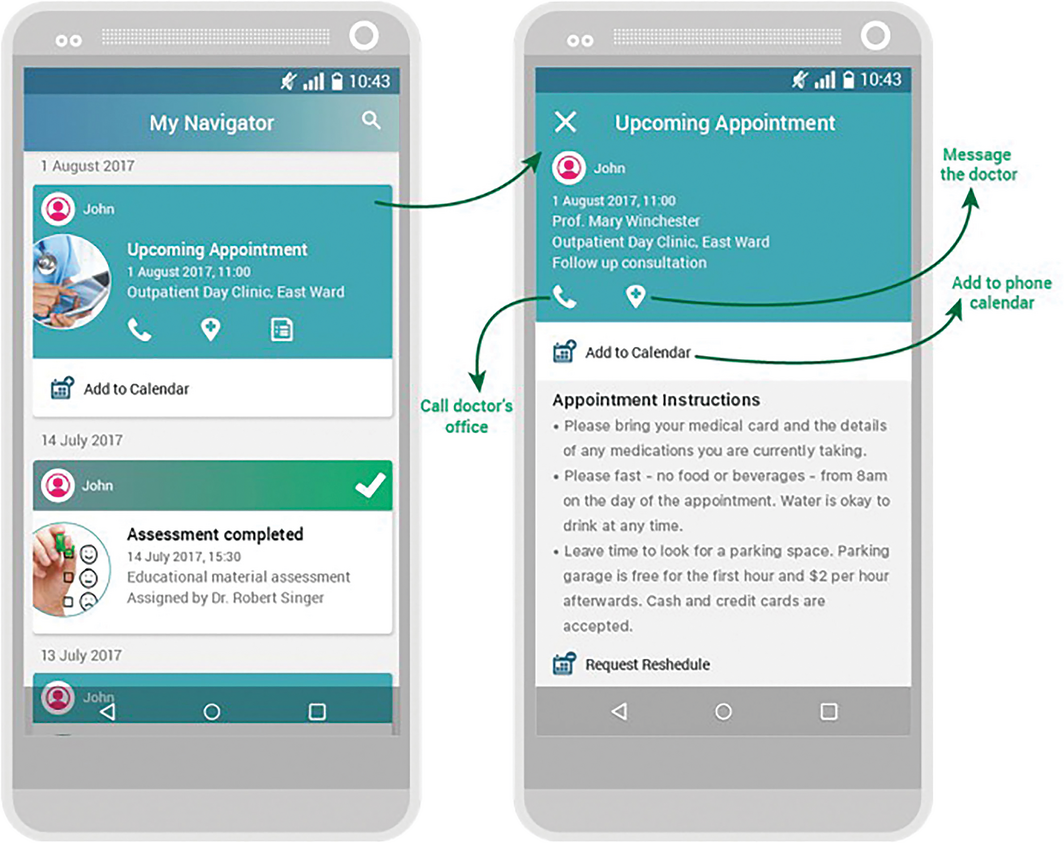 We thank the patients who shared their experiences, and acknowledge the support of the cystic fibrosis and electronic medical records team at The Children's Hospital at Westmead in enabling this research.