External validation and comparison of four cardiovascular risk prediction models with data from the Australian Diabetes, Obesity and Lifestyle study

Objectives: To evaluate the performance of the 2013 Pooled Cohort Risk Equation (PCE‐ASCVD) for predicting cardiovascular disease (CVD) in an Australian population; to compare this performance with that of three frequently used Framingham‐based CVD risk prediction models.

Participants: 5453 adults aged 40–74 years enrolled in the Australian Diabetes, Obesity and Lifestyle study and followed until November 2011. We excluded participants who had CVD at baseline or for whom data required for risk model calculations were missing.

Conclusions: The 2013 PCE‐ASCVD or 1991 Framingham should be used as CVD risk models in Australian. However, the CVD high risk threshold for initiating CVD primary preventive therapy requires reconsideration.

The known: Clinicians need accurate and reliable tools to help identify people at increased risk of a cardiovascular event.

The new: Analysis of data for a contemporary Australian cohort indicate that the performance of the Pooled Cohort Risk Equation model and, to a lesser extent, that of the 1991 Framingham cardiovascular disease risk prediction model are superior to those of the two 2008 Framingham models in terms of discrimination, calibration, and clinical utility, both in men and women.

The implications: The 2013 Pooled Cohort Risk Equation and 1991 Framingham models are appropriate for estimating cardiovascular disease risk in Australia.

Primary prevention of cardiovascular disease (CVD) requires effectively implementing targeted individual‐level preventive strategies, including lifestyle and pharmacological interventions. Clinicians therefore need accurate, reliable tools for identifying people at increased risk of cardiovascular events. CVD risk prediction models use information on a number of risk factors to estimate the absolute risk of a cardiovascular event within a given period.1 Several models have been recommended for clinical use. In Australia, the National Vascular Disease Prevention Alliance (NVDPA) guidelines2 for managing absolute CVD risk recommend the established and widely used 1991 Framingham risk model.3 However, this model is based on data from the Framingham Heart Study, which investigated predominantly white people aged 30–74 years in a small United States town, and may not be applicable to the Australian population. Two updated versions of the 1991 Framingham risk model have been developed for predicting CVD risk in primary care without laboratory predictors: the 2008 Framingham and 2008 office‐based Framingham models.4 In validation studies, Framingham‐derived risk models have overestimated CVD risk in different populations.5,6

In 2013, the American College of Cardiology and the American Heart Association (ACC/AHA) released the Pooled Cohort Risk Equation for estimating atherosclerotic CVD risk (2013 PCE‐ASCVD), based on data from several prospective cohort studies in the US.7 Validation studies found that 2013 PCE‐ASCVD systematically overestimates CVD risk,8,9 and it has not been validated in an Australian cohort.

The authors of a recent systematic review of 212 articles on prediction models for CVD risk in general populations concluded that many models have not been externally evaluated or directly compared.10 External validation of a risk prediction model is essential for providing sufficient evidence to evaluate its performance in a contemporary population and to determine its applicability.11 Further, most validation studies have not accounted for the effects of treatment, which may explain the overestimation of predicted risk.

We evaluated the performance (calibration and discrimination) of the 2013 PCE‐ASCVD in an Australian population, and compared its performance with that of three frequently used Framingham‐derived CVD risk prediction models (1991 Framingham,3 2008 Framingham,4 2008 office‐based Framingham4).

We analysed data from the Australian Diabetes, Obesity and Lifestyle (AusDiab) study, a national, longitudinal, population‐based cohort study undertaken in 42 randomly selected urban and non‐urban areas of the six Australian states and the Northern Territory. The AusDiab study methods have been previously described.12 The study included three rounds of data collection: baseline (May 1999 – December 2000); phase 2 (June 2004 – November 2005); and phase 3 (August 2011 – June 2012). Data were collected during a household interview and at subsequent biomedical examinations (including blood analyses, anthropometric measurements, and questionnaires). Of 20 347 eligible people, 11 247 adults over 25 years of age completed the household interview and underwent biomedical examination (response rate, 55%). All living baseline participants were invited to attend follow‐up assessments during phases 2 and 3.

For this analysis, we limited the study population to the 6956 participants aged 40–74 years without a history of CVD. We also excluded 521 participants for whom data required for risk model calculations were missing and 982 for whom information on outcome events was missing. The final sample included 5453 participants (complete case analysis).

We calculated the 10‐year predicted CVD risk for each participant in the AusDiab cohort from their baseline data with four CVD risk prediction models: 1991 Framingham,3 2008 Framingham,4 2008 office‐based Framingham,4 and 2013 PCE‐ASCVD7 (Supporting Information, table 1).

Events were recorded between enrolment (1999–2000) and 30 November 2011, the most recent date for which data were available. Self‐reported CVD events were collected with an interviewer‐administered questionnaire and adjudicated by an expert committee that reviewed medical records.13 The accuracy of self‐reporting of CVD events has been established.14 Cause‐specific mortality was determined from International Classification of Diseases, tenth revision, Australian modification (ICD‐10‐AM) codes in death certificates. Mortality status and causes of death were determined by linkage of data with the Australian National Death Index.

We did not impute missing data because most were for outcome events; complete case analysis was therefore not biased.15

We calculated the predicted and observed 10‐year cardiovascular risks for each participant in the AusDiab cohort for each decile of predicted risk and each 5‐year age group.

We assessed the clinical performance of each model by examining their discrimination and calibration for predicting risk in men and women separately. Calibration (agreement of predicted with observed 10‐year CVD risk) was assessed by plotting observed proportions against predicted probabilities (Loess calibration plots) for each decile of predicted risk for each risk model and for each 5‐year age group; a linear relationship with a gradient of one indicates perfect calibration. We also calculated the Brier score (mean square of the deviation between predicted and observed risks) as a measure of the accuracy of prediction.

Discrimination (the ability of the model to differentiate between patients who experience a cardiovascular event and those who do not) was assessed by calculating for each risk model the area under the receiver operating characteristic curve statistic (C statistic; 1 = perfect discrimination) and Somers D statistic (ranging from –1 = all pairs disagree to 1 = all pairs agree).

For the Framingham risk models, we collated participants into low (10‐year predicted CVD risk < 20%) and high risk groups (≥ 20%); for the 2013 PCE‐ASCVD risk model, we applied a threshold of 7.5%. We present scaled rectangular diagrams to illustrate the discrimination performance of the four CVD risk models.

Finally, we applied decision curve analysis19 to evaluate the clinical usefulness of the four models. At any given threshold probability (ie, the threshold for dividing individuals into low and high risk groups), the model with the greatest net benefit — defined as the difference between the numbers of true and false positives, weighted by the probability of disease — was deemed to have the highest clinical value.

The 2013 PCE‐ASCVD model provided the most accurate estimates of 10‐year CVD risk for both men and women; the two 2008 Framingham models consistently overestimated risk. The absolute discordance between mean observed and predicted risks was greater for people with higher CVD risk, particularly in the Framingham models (Box 2).

The C‐ and Somers D statistics were each slightly larger for the 2013 PCE‐ASCVD model, both in men and women, than for the three Framingham models (that is, slightly better discrimination) (Box 5).

Our finding that the 2013 PCE‐ASCVD overestimates CVD risk is consistent with reports of previous investigations in cohorts from the United States,8,9,19,20 Europe,21 and Asia22 for externally validating the model. The discrepancies between actual and predicted CVD risk may be attributable to the availability of more effective cardiovascular preventive interventions (such as lipid‐lowering medications). However, we adjusted our risk estimates for statin treatment, and it has been reported that interventions such as statin use and revascularisation procedures do not explain the large discrepancy between observed and predicted rates of CVD.17

Although the 2013 PCE‐ASCVD model was superior to the other risk models, the 7.5% 10‐year CVD risk threshold for identifying people at high risk is very low. Applying this criterion to a contemporary Australian cohort considerably increased the number of people classified as being at high risk, only a minority of whom developed CVD. The balance between the benefits and harms associated with treating people at low risk of developing CVD may not be acceptable to many individuals.3

Despite analysing data for an independent contemporary cohort of Australian adults, there are some limitations to our external validation of the four risk prediction models. CVD outcome events were ascertained by self‐report and adjudication; however, this approach has been found to be accurate.14 The degree of loss of AusDiab participants to follow‐up was considerable, and we also excluded participants with missing data; these factors may have influenced our estimates, particularly as most missing data were related to observed CVD event rates. Further, the AusDiab participants comprise a relatively healthy cohort with very low CVD event rates, a consequence of healthy volunteer bias. The models’ performance might be improved by recalibration, although the Framingham model recommended by the NVDPA has not been recalibrated.2

We found that the recently developed AHA/ACA PCE‐ASCVD risk prediction model is slightly better than the currently recommended 1991 Framingham risk model for predicting CVD; each of these models outperform the two 2008 Framingham CVD risk models, both in men and women, and are therefore more appropriate risk models for Australia. However, the 10‐year CVD risk threshold of 7.5% recommended by the ACC/AHA for initiating CVD primary preventive treatment may be too low, identifying a large proportion of the population as being at high risk of a cardiovascular event.

Box 1 – The characteristics of the included participants, from the baseline dataset for the Australian Diabetes, Obesity and Lifestyle (AusDiab) study 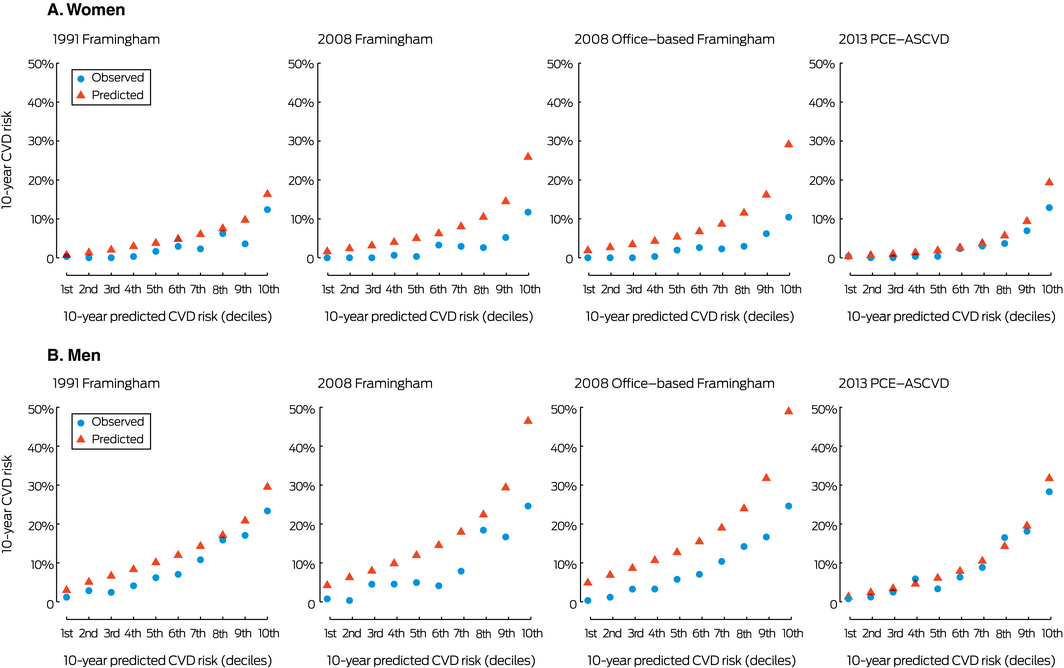