Objective: To estimate rates of respiratory syncytial virus (RSV)‐associated hospitalisation across the age spectrum, and to identify groups at particular risk of serious RSV‐associated disease.

Respiratory syncytial virus (RSV) is the leading viral cause of acute lower respiratory infections in young children.1 Severe RSV disease in older adults is also being reported more frequently, and is associated with substantial morbidity and mortality.2,3 National data on the RSV disease burden in Australia, needed to inform future research and prevention strategies, is scarce.

The estimated global annual incidence of acute lower respiratory infections caused by RSV is 33.1 million episodes, and 3.2 million children under 5 years of age are admitted to hospital with RSV‐associated disease.1 The incidence of severe RSV disease is higher among children in lower income countries, but in all regions the highest RSV‐associated hospitalisation rates are for children less than 6 months old.1 Young age is an independent risk factor for severe RSV disease; most hospitalised children are otherwise healthy.4

Severe RSV disease can also affect adults, particularly older people and those with chronic cardiopulmonary diseases,2,3 but the burden of disease in adults is less well characterised. In the United Kingdom, more general practitioner visits, hospitalisations, and deaths of younger children and older adults are attributable to RSV infections than to influenza in most years.2,5

As RSV infections are not notifiable in Australia6 and testing practices differ between locations and for different population groups,7,8 obtaining accurate population‐based estimates of incidence is challenging. One Australian study based on published sentinel laboratory data, supplemented with RSV‐coded hospitalisation data, estimated national hospitalisation rates,6 but the information regarding age of patients and their hospitalisations available to the authors was limited. A number of studies have estimated RSV hospitalisation rates for young children in specific Australian regions,6,7,9,10,11 and have identified groups at particular risk, including Aboriginal and Torres Strait Islander children9,10,11 and children born pre‐term or with bronchopulmonary dysplasia.10 Studies describing RSV‐associated hospitalisations of Australian adults have not been reported.

In our study, we analysed national RSV‐coded hospitalisation rates during 2006–2015 to estimate the rates of RSV‐associated hospitalisation across the age spectrum and to identify groups at particular risk of serious RSV disease.

De‐identified national hospitalisation data for the period 1 January 2006 – 31 December 2015 were obtained from the Australian Institute of Health and Welfare National Hospital Morbidity Database. We extracted hospitalisations with International Classification of Diseases, tenth revision, Australian modification (ICD‐10‐AM) diagnosis codes for RSV pneumonia (J12.1), RSV bronchitis (J20.5), RSV bronchiolitis (J21.0), and RSV as the cause of diseases classified to other chapters (RSV organism) (B97.4). These codes were selected on the basis of earlier studies6,10,12,13 and expert opinion. Hospitalisations of children under 24 months of age with a principal diagnosis code of unspecified acute bronchiolitis (J21.9) were also extracted, as this diagnosis is frequently associated with RSV disease.14,15 Hospitalisation data for Aboriginal and Torres Strait Islander (Indigenous) Australians were also separately analysed from 2011 onwards, when completeness of Indigenous identification was considered adequate in all jurisdictions.16 Mid‐year population estimates for Australia, by state and territory (jurisdiction), sex, and age, were based upon Australian Bureau of Statistics census estimates for 2016 (Australia)17 or 2011 (Indigenous Australians).18

We describe hospitalisations with an RSV code (ICD‐10‐AM codes J12.1, J20.5, J21.0, B97.4) by diagnostic code, age at admission, sex, jurisdiction of residence, and Indigenous status (principal diagnosis or other diagnosis). We describe hospitalisations with an RSV code by month and year of admission, length of stay (LOS), and in‐hospital deaths (principal diagnosis only). Hospitalisation rates were calculated using mid‐year population data (Poisson distribution assumed) and are presented as rate per 100 000 total population; subgroup rates were compared as incidence rate ratios (IRRs) with 95% confidence intervals (CIs). Median LOS with interquartile range (IQR) is reported; episodes with LOS exceeding 29 days were excluded (191, 0.3%) as disaggregated data for later years were not available (ie, stays of more than 29 days were reported as “> 29 days”).

Summary characteristics and seasonality of hospitalisations

During 2006–2015, there were 86 687 hospitalisations with an RSV code in at least one diagnostic field, including 63 814 (73.6%) with an RSV code in the principal diagnostic field (Box 1). For all states and territories apart from the Northern Territory, the clear peak in hospitalisation numbers was during autumn–winter; the magnitude of the peak rate and month varied by year and jurisdiction (Supporting Information, figure 1).

The characteristics of RSV‐coded hospitalisations (diagnostic code, age, sex, jurisdiction of residence, and Indigenous status) are summarised in Box 1. RSV bronchiolitis was the most frequent RSV‐coded principal diagnosis, and was also the most frequent principal RSV code among children under 24 months of age (Supporting Information, figure 2). The RSV organism code was listed in a diagnostic field (principal or additional) for 18 035 hospitalisations with an RSV code (20.8%); the most frequent principal diagnosis codes for these episodes were unspecified acute upper respiratory infection (3180, 17.7%), unspecified acute lower respiratory infection (2973, 16.5%), unspecified asthma (1786, 9.9%), and chronic obstructive pulmonary disease with acute lower respiratory infection (1531, 8.5%).

The numbers of hospitalisations of children under 5 years of age with an RSV code peaked at one month of age, then declined with age (Box 3).

Bronchiolitis in children under 24 months of age

Hospital length of stay and deaths

Our study provides important new data on RSV morbidity among Australian adults. In the UK, the estimated hospitalisation rate for adults aged 65 or more was 156 per 100 000 population (1995–2009).2 Our estimates, based on RSV‐specific codes, are lower, but we found a 20‐fold increase in RSV‐coded hospitalisations in this age group during 2006–2015, probably reflecting increased recognition of and testing for RSV disease in older adults;2,3,8 RSV‐associated hospitalisations in this age group may still be under‐recognised. Compared with other age groups, we found that adults over 65 had longer hospital stays, and the proportion of in‐hospital deaths was greater. This is consistent with overseas findings of longer hospital stays and high mortality rates for older adults hospitalised with RSV infections.3 Older people are a recognised target group for preventing RSV disease,3,25 and further investigation of their disease burden is needed.

We found that the RSV‐coded hospitalisation rate was 3.3 times as high for Indigenous Australians as for other Australians. The higher rate of RSV‐associated hospitalisations among Indigenous children9,10,11 has been attributed to the greater prevalence of socio‐economic risk factors for severe RSV disease, including premature birth, low birthweight, and exposure to smoking.27 We identified that the risk of RSV‐associated hospitalisation was also 2.9–4.3 times as high for Indigenous adults aged 35–54 years as for non‐Indigenous adults of corresponding age. The risk factors underlying these differences should be investigated to inform targeted prevention strategies.

The main limitation of our study was that we estimated RSV‐associated hospitalisation rates on the basis of RSV‐specific ICD codes, an approach that can underestimate the pathogen‐specific disease burden of respiratory infections.7,13,14,15,24,28 Diagnostic codes other than RSV‐specific codes have also been assigned to RSV‐associated hospitalisations.7,13,15 We found that the seasonal patterns of hospitalisations for conditions coded as unspecified acute bronchiolitis were similar to those of RSV bronchiolitis, which suggests the involvement of RSV as a pathogen in bronchiolitis may be under‐ascertained. RSV is detected in 50–70% of young children hospitalised for bronchiolitis, but other pathogens, including parainfluenza viruses, human metapneumovirus and influenza viruses, are also associated with this diagnosis.7,19 RSV has been implicated in syndromes not specific to RSV infection, including unspecified acute lower respiratory infection, pneumonia, upper respiratory infection, asthma, and exacerbation of chronic obstructive pulmonary disease;3,4,7,15 further characterisation of the contribution of RSV infections to hospitalisations for these conditions is needed.

Data linkage studies incorporating clinical and laboratory data and based on birth cohorts can improve the ascertainment and characterisation of RSV‐associated hospitalisations.7,10,13 Such studies, however, have not yet been undertaken in most Australian states and territories, and the analysis of RSV‐coded hospitalisations provides an appropriate alternative for assessing the population‐level burden of disease in order for informing targeted interventions for groups at particular risk.6,10,12 Further, validation studies of RSV‐associated ICD codes would be valuable for assessing the sensitivity and specificity of our analysis.

Despite its limitations, our study provides comprehensive estimates of RSV‐coded hospitalisation rates in Australia. Consistent with previous reports, we found that the highest incidence of RSV‐associated hospitalisations was among young children, particularly those less than 6 months old. We also found that adults aged 65 or more are more frequently hospitalised with RSV disease than younger adults, and that Indigenous Australians are hospitalised more than other Australians. Our analysis provides a starting point for designing RSV disease prevention strategies across the age spectrum, and will inform future investigations in this area.

Box 2 – Respiratory syncytial virus‐coded hospitalisation rates (principal diagnosis only), Australia, 2006–2015, by age group and year: A. children under 2 years of age; B. children from 2 years to under 5 years of age; C. children aged 5 years or more and adults 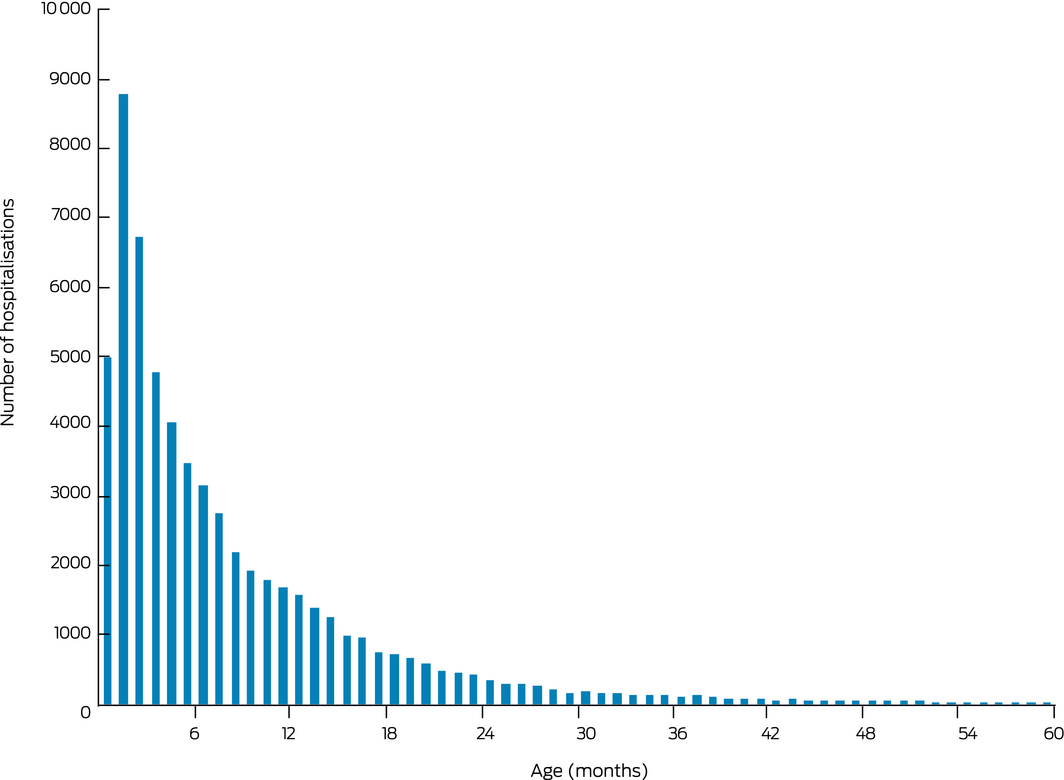 This study formed part of Gemma Saravanos’ doctoral research at the University of Sydney Children's Hospital at Westmead Clinical School, funded by a University of Sydney Postgraduate Award and supported by the National Centre for Immunisation Research and Surveillance (NCIRS). Nicholas Wood is supported by a National Health and Medical Research Council Career Development Fellowship. We acknowledge the Australian Institute of Health and Welfare for providing the hospitalisation data.