Concomitant prescribing of opioids and benzodiazepines in Australia, 2012–2017

Studies in the United States have raised concerns about the increasing concomitant prescribing of opioids and benzodiazepines and the incidence of associated serious harms, including respiratory depression, hospitalisation, and death.1,2,3 As a result, and following their own 2016 review, the Food and Drug Administration decided that opioid and benzodiazepine medications in the US must include boxed warnings about possible serious side‐effects.4 Whether concomitant prescribing has also increased in Australia is unknown.

We conducted a retrospective population‐based cohort study of the concomitant dispensing of opioids and benzodiazepines in Australia between 1 July 2012 and 30 June 2017 (ethics approval: University of South Australia; reference, P099/10). We analysed a 10% sample of de‐identified Pharmaceutical Benefits Scheme (PBS) claims data provided to us by the Australian Department of Human Services to estimate the proportions of people aged 18 years or more who were dispensed PBS‐listed opioids or benzodiazepines. Concurrent dispensing was defined as a benzodiazepine being dispensed to an individual within a week of their being dispensed an opioid. The duration of an episode of concurrent dispensing was calculated from the date of dispensing and the prescription duration. To examine changes over time, rate ratios (RRs) were estimated in Poisson regression models that accounted for correlation of monthly rates.

The proportion of concomitant benzodiazepine dispensing to opioid users in Australia has declined since 2012 but remains substantial (12.7%), similar to the level in US studies (9.6–17%) associated with serious harms and FDA safety warnings.1,2,3 The most frequently dispensed benzodiazepine, diazepam, is long acting and has pharmacologically active metabolites, and may therefore cause excessive sedation. While 76% of opioid overdose deaths in Australia are of younger adults (25–54 years of age),5 concomitant use with benzodiazepines is frequent among older people, who are at increased risk of medication‐related adverse effects such as respiratory depression, falls, and fractures. Concerted efforts by health professionals and policy makers in Australia are clearly needed to reduce overprescribing of these medications, to identify patients at greater risk, and to implement appropriate risk mitigation strategies. 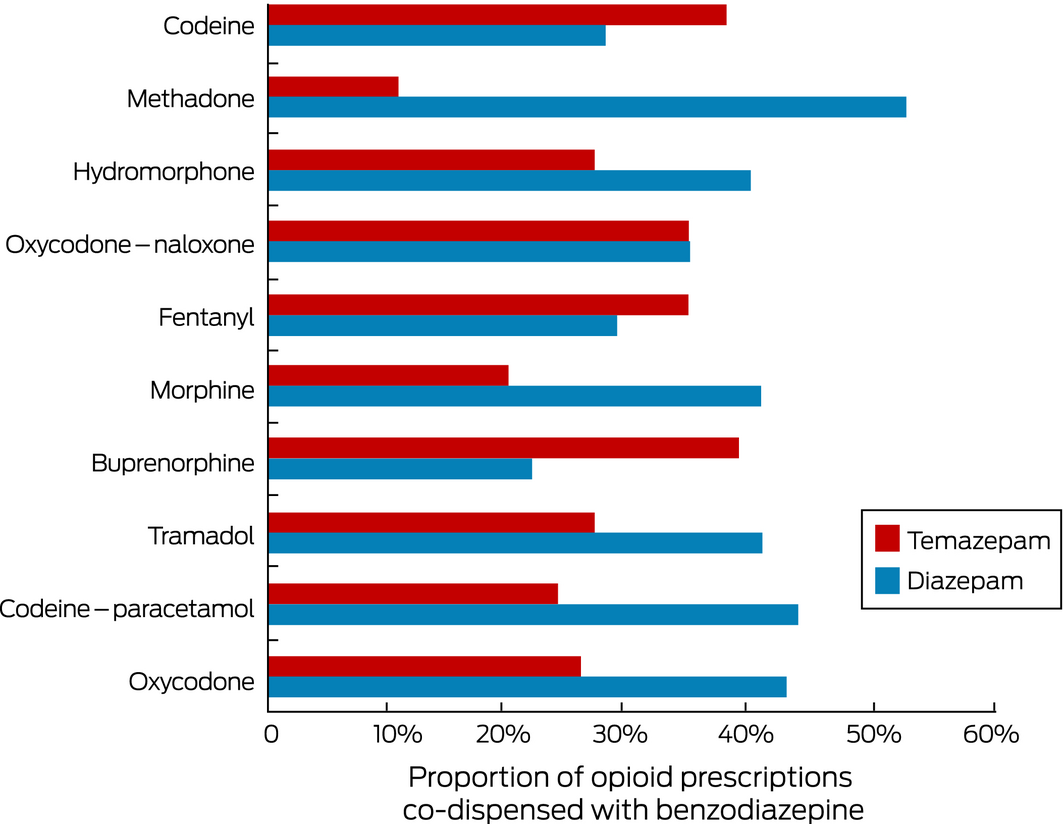 This research was supported by a National Health and Medical Research Council (NHMRC) Centre of Research Excellence in Post‐Marketing Surveillance of Medicines and Medical Devices grant (GNT1040938). Elizabeth Roughead is supported by an NHMRC Fellowship (GNT 1110139).