Objectives: To compare the incidence of liver-related emergency admissions and survival of patients after hospitalisation for decompensated cirrhosis at two major hospitals, one applying a coordinated chronic disease management model (U1), the other standard care (U2); to examine predictors of mortality for these patients.

Participants: Patients admitted with a diagnosis of decompensated cirrhosis during October 2013 – October 2014, identified on the basis of International Classification of Diseases (ICD-10) codes.

The implications Multicentre randomised controlled trials that examine the efficacy of our chronic liver failure program are warranted.

Cirrhosis is a chronic liver disease, and is associated with multiple complications and repeated hospital admissions for as many as 50% of patients in whom it progresses to hepatic decompensation.1,2 In Australia, an estimated 6.2 million people have some form of chronic liver disease,3 and the annual number of deaths it caused increased by 31% between 2006 and 2015.4 The frequent re-admissions that are characteristic of decompensated cirrhosis contribute to the substantial financial cost of managing liver disease;3 an Australian study found that the incidence of liver-related emergency admissions within 30 days of initial discharge among patients with decompensated cirrhosis with ascites was 42%.5 In a prospective multicentre study in the United States, 50% of hospitalised patients with decompensated cirrhosis were re-admitted within 90 days;2 in a retrospective study, the 30-day re-admission rate was 37%, with 22% of re-admissions classified as preventable.6

A coordinated system of care for patients with cardiac failure — chronic disease management — has been associated with significant cost savings and reduced rates of heart failure-related admissions and mortality.7-9 In a randomised pilot trial, our group found that patients with decompensated cirrhosis treated in a chronic liver failure program based on chronic disease management principles were more likely to attend clinic and surveillance (endoscopy and radiology) appointments.10 Since 2010, the chronic liver failure program has been an integral part of care for patients with decompensated cirrhosis at our hospital.

As re-admission rates and survival are key quality indicators when evaluating chronic disease management,11 we compared these parameters for our institution and its coordinated care model with those of another major hospital in our health region that provides standard care for patients with decompensated cirrhosis.

The study was a retrospective observational cohort study in two major hospitals in an Australian capital city with different models of care for managing patients with decompensated cirrhosis.

Unit 1 (U1) is a 593-bed general hospital with an intensive care unit, an accident and emergency unit, and inpatient gastroenterology and hepatology units; it also houses the centre for the state liver transplantation service. A coordinated care model is practised in U1; patients with decompensated cirrhosis are managed in a liver unit staffed by gastroenterologists with a special interest in hepatology, and post-discharge care is coordinated in a chronic liver failure program, a chronic disease management intervention we have previously described.10 The multifaceted intervention encompasses four chronic disease management domains: delivery system redesign, decision support, self-management support, and clinical information systems. Its key aims are to improve adherence to evidence-based care and to enhance post-discharge monitoring of patients by providing protocol-based checklists and care plans for post-discharge care, post-discharge phone calls, home visits, self-management support with enhanced patient and carer education, patient action plans for dealing with complications (ascites, encephalopathy), access to day care therapeutic large volume paracentesis, and a rapid care pathway for patients whose condition is deteriorating. Two experienced hepatology nurses (0.6 full-time positions) support the program in close consultation with the hepatologists. Patients are provided with office hours contact numbers for the nurses and are encouraged to call when they feel unwell or have worsening abdominal distension, altered sensorium, or gastrointestinal bleeding.

Unit 2 (U2) is a 680-bed general hospital with an intensive care unit, an accident and emergency unit, and an inpatient gastroenterology and hepatology unit. Patients with decompensated cirrhosis are managed in a general gastroenterology or general medical ward. Patients attend follow-up clinics as advised at the time of discharge, without organised follow-up by nurses. No elective paracentesis is arranged, and nurses do not liaise between specialists and patients. Patients present to the emergency department if they are unwell.

Patients admitted to each hospital with a diagnosis of a decompensated cirrhosis-related event during October 2013 – October 2014 were identified on the basis of International Classification of Diseases (ICD-10) codes for cirrhosis and its complications as primary and secondary diagnoses. Patients (U1, 62; U2, 68) were excluded if they died during the initial admission or after referral to palliative care, were lost to follow-up, or were admitted for an elective procedure without decompensated cirrhosis. As our study involved voluntary access to the public health system, some patients had been admitted to both U1 and U2; seven patients with equal numbers of admissions to each unit were therefore excluded from our study, as were four patients admitted to other public hospitals after their initial admission to either U1 or U2. Patients were followed until the end of October 2016, liver transplantation, loss to follow-up, or death.

Ethics approval was obtained from the Human Research Ethics Committees of U2 (reference, HREC/17/RAH/83); as the study was a quality improvement initiative, it was exempt from formal ethics committee review at U1.

In this study, we compared the long term effects of managing decompensated cirrhosis with a coordinated care model, including key quality indicators such as numbers of liver-related emergency admissions and transplantation-free survival, with those of standard care as offered by another large hospital in the same metropolitan health region. The incidence of liver-related emergency admissions was significantly lower and transplantation-free survival higher for patients treated in the coordinated care model. Lower rates of emergency admissions, some of which may be high value admissions (ie, clinically appropriate), can be detrimental to the patient and lead to higher mortality,13 but, after adjusting for age, sex, baseline MELD score, alcohol-related aetiology, and the presence of comorbid conditions, mortality was lower among patients receiving coordinated care. These patients also had more elective re-admissions, reflecting the successful delivery of planned care, and probably contributing to the reduced incidence of liver-related emergency admissions.

We assessed the contributions of factors at the level of the patient, hospital facilities, and care model to the differences in outcomes between hospitals. Despite the higher mean Charlson index comorbidity score for patients in U1, their outcomes were superior to those of patients in U2. Liver disease severity, as assessed by MELD scores, was similar for the patients of the two hospitals. U1 and U2 were similar with regard to features considered advantageous,14 including having high volumes of patients with cirrhosis, emergency and intensive care departments, academic hospital status, and advanced endoscopic and radiological facilities.

The two hospitals differed distinctly in one key area: their model of care. While we cannot exclude that other, unmeasured factors contributed to the differences in rates of liver-related emergency admissions and survival, it is probable that the coordinated care model was the crucial factor. It is difficult to identify the specific aspect of the multifaceted care model most likely to have contributed to its positive effects, but the dedicated inpatient liver unit, staffed by gastroenterologists with a special interest and experience in hepatology and liver transplantation, may have been important, as specialist care has been associated with reduced mortality among patients with decompensated cirrhosis.15 The presence of the state liver transplantation unit at U1 may have influenced outcomes, as transplantation centres are associated with lower in-hospital mortality among patients with cirrhosis.14 However, patients in U1 and U2 had equal access to the liver transplant facility.

In addition to the differences in inpatient care, the dedicated post-discharge monitoring program, led by specialist hepatology nurses, was probably also critical for the better outcomes for patients of U1. Better post-discharge monitoring, greater self-management by patients, and adherence to evidence-based care plans may have led to potential emergency admissions becoming elective hospitalisations. The lower rates of liver-related emergency admissions and mortality for patients of U1 are consistent with reports that close attention to quality indicators when managing ascites, including early paracentesis and initiation of diuretic therapy, reduces 30-day re-admission rates and 90-day mortality.16

Ascites was the most common reason for hospitalisation, both at baseline and during follow-up. The frequency of ascites as a reason for re-admission was lower than that for the initial admission among patients of U1, but not those of U2. It seems likely that the specific components of the coordinated care model regarding ascites — education about reducing dietary salt, weekly monitoring of electrolytes and weight, nurse-facilitated elective paracentesis — played a role in reducing ascites-related emergency admissions.

Limitations include the retrospective design of the study, the small numbers of patients, and the possibility that unmeasured factors influenced the main outcomes. These limitations may have led us to overestimate the benefit of the coordinated care model. Nevertheless, our findings are important, given the high prevalence and cost of managing patients with decompensated cirrhosis in Australia.

Our investigation highlights the differences in key quality indicators, such as mortality and incidence of emergency admissions, for patients with cirrhosis of similar severity who are managed in equivalent health care settings but with different models of care. Verifying the clinical efficacy and cost-effectiveness of this model of care in a large multicentre prospective, randomised controlled trial should be a research priority. 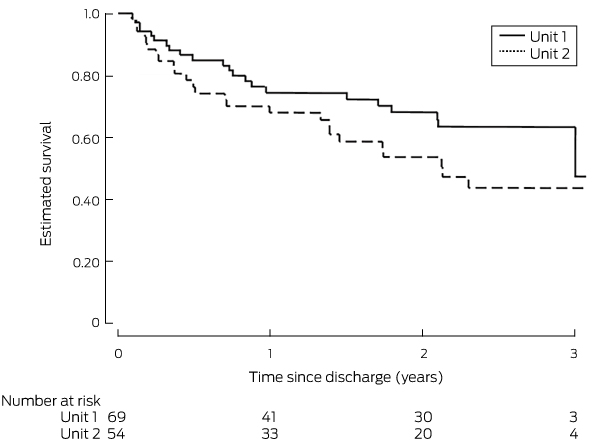