Objectives: To quantify the number of implantable cardioverter–defibrillator (ICD) procedures in Australia by year, patient age and sex, and to estimate age group-specific population rates and the associated costs.

The new ICD procedure numbers are increasing in Australia. The highest rates are for people aged 70 or more; 90% of patients are over 35. ICD devices were removed from an average of one young, eight middle-aged and six older people each month during 2014–15. ICD-related hospitalisation procedures cost an estimated $154 555 814 in 2013–14.

The implications Further investigations are needed to determine whether increasing rates of ICD therapy reflect evidence-based management decisions, to characterise the population receiving ICDs, and to quantify patterns of care and patient outcomes.

Implantable cardioverter–defibrillators (ICDs) are life-saving devices that prevent sudden cardiac death.1 The ICD is surgically inserted under the chest wall to monitor cardiac rhythm, and, in the event of life-threatening ventricular arrhythmias, delivers an electric shock. In accordance with the results of key clinical trials,2,3 ICD therapy is recommended for patients at the greatest risk of sudden cardiac death; it is also recommended as secondary prevention for out-of-hospital cardiac arrest survivors, a patient group at clearly increased risk. Indications for ICD therapy as primary prevention are based on disease-specific guidelines that are imperfect; most sudden deaths are of patients deemed to be at low risk.4

When making decisions about recommending ICD therapy, a clinician must weigh its life-saving benefits against the potential harms, including those associated with its surgical insertion, the need for ongoing 6-monthly device interrogations (functional checking), and battery replacement every 8–10 years. Patients with ICDs are at risk of inappropriate shocks, infection, lead fracture, thrombosis, and device or lead recall, which may result in ICD removal or adjustment procedures. The psychosocial burden includes greater risk of device-related anxiety5 and post-traumatic stress after a shock.6 From a public health perspective, ICD therapy is associated with high costs after any appropriate or inappropriate shock,7 although they are yet to be quantified in Australia.

It has been reported that ICDs are both under- and overused in certain populations. For example, several studies have found only 13–40% of patients who meet guidelines for ICD therapy received it prior to a sudden cardiac event.8,9 On the other hand, a recent American study found that as many as 23% of ICD insertions are inconsistent with clinical guidelines and identified an increased risk of adverse outcomes, including in-hospital death and post-surgical infection.10

The use of ICDs has increased in many countries.11 In Australia, two studies that quantified ICD procedure numbers by analysing routinely collected health data12,13 found a marked increase in the numbers of insertion and replacement procedures over the past 20 years. No Australian studies have quantified the costs of ICD therapy or the rates of adverse procedures (including removal) and complications. We therefore quantified the number of procedures in Australia by year, patient age, and sex, and estimated age group-specific population rates and the associated costs.

Australia has a publicly funded, universal health care system that provides its citizens and permanent residents with a range of subsidised health services, including treatment in public and private hospitals. In 2014, the estimated population of Australia was 23.5 million people.14

Since July 1993, the National Hospital Morbidity Database (NHMD) has recorded diagnoses and procedures for all hospitalisations in Australia. Data for most public and private hospitals are supplied to the Australian Institute of Health and Welfare (AIHW) for inclusion in the NHMD by each Australian state and territory, including public and private acute, public and private psychiatric, and private free-standing day hospitals.15 NHMD data are aggregated and freely available.16,17

In 2012–13, 9.4 million hospital separations from public and private hospitals were reported to the NHMD.18 The NHMD defines a hospital separation as the completion of treatment for an admitted patient because of death, discharge, or transfer to another facility or care type (eg, from an acute to a rehabilitation service). A record is created at each hospital separation; if a person has several admissions for the same medical procedure, each separation has a unique NHMD record. However, NHMD records are not linked, meaning we cannot determine the total number of people in the dataset or whether an individual was hospitalised several times or underwent more than one procedure during a given period. Hospital separations are recorded by financial year (ie, 1 July – 30 June). The NHMD includes limited patient demographic information, including sex (male, female) and age at time of hospital separation by age group.

After each hospital separation, a hospital coder records all procedures and diagnoses during the hospitalisation according to the Australian Classification of Health Interventions (ACHI; since 2000).19 The diagnosis and procedure codes are combined with other variables, such as length of stay and age, to categorise separations according to the Australian refined diagnosis-related groups (AR-DRG) classification system (since 1997).20

The ACHI is the Australian national standard for coding medical procedures and interventions in public and private hospitals.19 Twenty procedure classification chapters are subdivided into subchapters, block numbers, and procedure numbers. The ACHI system records all procedures during a hospitalisation; one hospitalisation may include several procedure codes. We refer to ICD procedures defined by ACHI codes as “procedures”.

The AR-DRG classification encompasses 23 major diagnostic categories, subdivided into medical, surgical and other groupings.20 The AR-DRG procedure code for the procedure associated with the highest average cost is recorded for each hospitalisation. We refer to ICD procedures defined by AR-DRG codes as “hospitalisations”.

The Independent Hospital Pricing Authority determines the average cost of admitted patient episodes of care in Australian public hospitals according to AR-DRG classifications.21 States and territories submit cost data to the National Hospital Cost Data Collection annually. Those costs, aggregated from micro-costs for all health care resources consumed (including length of stay, pharmaceuticals, prosthetics and devices, pathology, imaging, medical input, nursing), inform activity-based funding of services in Australia. In 2013–14, the average cost of a hospitalisation for each ICD procedure was:

As we analysed aggregated, de-identified data, ethics approval was not required for this study.

The numbers and rates of all types of ICD procedures increased in Australia between 2002–03 and 2014–15. During the 3 years for which cost data were available (2011–12 to 2013–14) total ICD hospitalisation costs increased by 7%. Population procedure rates were highest in people aged 70 years or more and lowest in those under 35. It is unclear whether the overall increase in procedure rates reflected an increasing need for ICD therapy, or was a direct result of increased awareness of risk factors for sudden death. Publication of the results of the Sudden Cardiac Death in Heart Failure Trial (SCD-HeFT) in 20022 and Multicenter Automatic Defibrillator Implantation Trial II (MADIT-II) in 2005,3 as well as of several disease-specific and ICD guideline documents have probably influenced the increased use of ICDs. Our data indicate a gradual change in practice in Australia rather than a sharp increase in use.

We found that complication rates for ICD insertion and replacement procedures declined markedly from 2002–03 to 2014–15. The most notable decline was from 2009–10 to 2010–11, coinciding with a change in coding. Prior to 2009, a complication was defined as being severe or catastrophic; since 2010, only catastrophic events are recorded as complications. The declining number of complications between 2006–07 and 2009–10, prior to the coding change, may be related to growing clinician experience. Specifically, greater surgical experience has been associated with a lower complication rate;22 complication rates are lower for electrophysiologists, general cardiologists, and cardiothoracic surgeons than for general surgeons.23 The modest reduction in the average cost of ICD insertions and replacements may likewise be explained by growing competency and improvements in the device technology.

The highest rates of ICD insertion, replacement, adjustment and removal procedures are for people aged 70 years or more; we estimate that 41% of insertions were for patients in this age group. However, it is estimated that only 25% of clinical trial participants are aged 75 years or more, so there is relatively limited clinical evidence regarding benefits and harms in this population.24 ICD therapy is as clinically beneficial for older as for younger patients,25 but mortality after ICD insertion is higher among older patients.26,27 Assessment of the benefit of ICD therapy for older patients must take into account their relative risks of death from sudden cardiac death and from other causes.28 A patient-centred approach to care, including discussing the benefits and risks of ICD therapy with the patient and their family, is essential. The proportion of women among patients undergoing ICD procedures is relatively small (about 20%); the possibility that ICD therapy is underused in female patients should be investigated. Earlier studies in an older population of ICD recipients found that women were more likely to meet ICD criteria than men, but this did not apply to younger ICD recipients.29

The increased rate of ICD removal procedures was unexpected. During 2002–14, the number of ICD removals was equivalent to at least 4% of the number of insertions each year, and at least 3% of the number of insertions and replacements. In 2014–15, ICDs were removed from an average of one young, eight middle-aged, and six older patients each month (Box 4). Device deactivations, which do not require surgery, are not captured in these data. The most frequent reasons for ICD removal are post-surgical infection (clinically accepted infection rate: 1%), device malfunction, misdiagnosis of a heart condition, or lack of clinical benefit.30,31 The unexpectedly high rate of removals should be a priority for investigation.

The estimated overall cost of ICD procedures during 2011–14 was about $446 million dollars. ICD use, when evidence-based, is more cost-effective than standard care in terms of quality-adjusted life-years gained.32 We are fortunate to have an evidence-based method for preventing sudden cardiac death, and not offering this potentially life-saving therapy could be catastrophic; for some patients, there will be no second chance to revise their management plan. Ascertaining whether some procedures are unnecessary or decisions are non-evidence-based is not easy. The heterogeneity, unpredictability, and poor outcomes of patients with cardiac arrest make decisions about treatment particularly challenging.

The NHMD relies on hospital coders entering data for principal diagnoses accurately and consistently; the standard of coding is indeed high in Australia.33 We may have underestimated the number of ICD procedures, as data collection from some facilities was not consistent across the observation period; in the online Appendix, we have listed all changes to ACHI and AR-DRG codes and edition updates during the observation period that may explain some fluctuations in procedure numbers between years. We based our cost estimates for 2011–14 on Independent Hospital Pricing Authority estimates of the average cost of hospitalisation per procedure in public hospitals. As procedures in private hospitals are generally more expensive, we may have underestimated overall hospitalisation costs. We based our population estimates on Australian population data for June 2014, and rates for early years may have been underestimated.

ICDs are life-saving devices that prevent sudden cardiac death. It has been reported overseas that ICDs are both under- and overused in people with cardiac disease. We found that ICD procedures, which incur significant costs to the hospital system, are becoming more frequent in Australia. Analyses of routinely collected whole-of-population and person-level data are required to further assess the positive and negative consequences of ICD therapy. 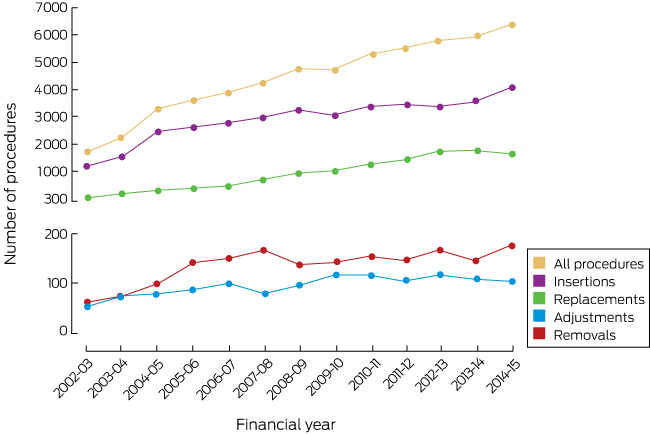 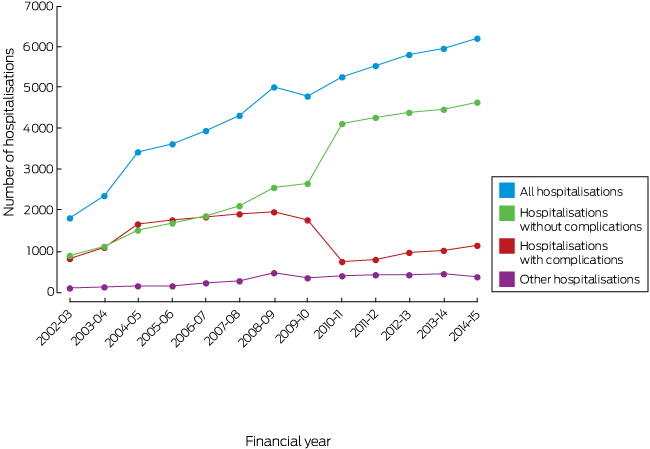