Objective: To assess and compare the post-operative outcomes of open and laparoscopic appendicectomy in children.

Participants, setting: Children under 16 years of age who underwent an appendicectomy in a public or private hospital in New South Wales between January 2002 and December 2013.

Main outcome measures: Association between type of appendicectomy and post-operative complications within 28 days of discharge, adjusted for patient characteristics and type of hospital.

The known Laparoscopic appendicectomy is increasingly preferred to open appendicectomy for managing appendicitis in children. The most recent systematic review of their outcomes was published in 2012.

The new Children with uncomplicated appendicitis have a lower risk of post-operative bowel obstruction after laparoscopic appendicectomy than after open appendicectomy, but their higher re-admission rates suggest that they may be discharged before post-operative symptoms have adequately resolved. Post-appendicectomy outcomes were similar for most age groups and hospital types.

The implications Undertaking appendicectomies in children outside tertiary paediatric hospitals is safe, and reduces waiting times, delays in care, and unnecessary travel for their families.

Acute appendicitis is one of the most common paediatric health emergencies requiring surgery, affecting about one in 800 children.1 Until the advent of laparoscopic surgery in the 1980s, the operation traditionally involved the classic McBurney muscle-splitting incision.2 Laparoscopic appendicectomy has since become the most common surgical technique for treating acute appendicitis in children.3 This shift in practice has been attributed to shorter lengths of hospital stay, earlier return to normal function, and a better cosmetic appearance.4 However, whether the post-operative outcomes of laparoscopic appendicectomy are equivalent to those of traditional open appendicectomy is still debated, particularly in cases of complicated appendicitis.

A 2012 systematic review found no difference in the post-operative complication rates of laparoscopic and open appendicectomy in uncomplicated cases of appendicitis in children; for complicated appendicitis, the risk of post-operative wound infections was 58% lower after laparoscopic appendicectomy, but the risk of intra-abdominal abscess was 30% higher.5 The influence of changing surgical management and the effects of characteristics such as age, type of hospital, and inter-hospital transfers on post-operative outcomes have not been comprehensively evaluated during the past decade. Up-to-date population-based information on outcomes is important for informing clinical decision making, resource allocation, and health policy on paediatric health care. The aim of our study was to assess and compare the post-operative outcomes of open and laparoscopic appendicectomy in children.

We analysed data for all children under 16 years of age who underwent appendicectomy for appendicitis in New South Wales between January 2002 and December 2013. Children with a diagnosis of abdominal pain, intestinal congenital anomalies, obstructive diseases, injuries, or intestinal conditions were excluded.

NSW Admitted Patient Data Collection (APDC) and Emergency Department Data Collection (EDDC) records were probabilistically linked by the NSW Centre for Health Record Linkage (www.cherel.org.au) and de-identified data were provided to the investigators. The APDC is a census of all inpatient admissions to public and private hospitals; it includes patient demographic information and relevant diagnoses and procedures for each admission, respectively coded according to the International Classification of Diseases, tenth revision, Australian modification (ICD-10-AM) and the Australian Classification of Health Interventions (ACHI). The EDDC is a statutory collection of data for all presentations to emergency departments in NSW public hospitals, and includes information on patient symptoms or diagnoses coded according to the International Classification of Diseases, ninth revision, clinical modification (ICD-9-CM), ICD-10-AM, and SNOMED-CT.

Cases of appendicitis were classified as either uncomplicated or complicated (with peritonitis, rupture or abscess). The relevant diagnosis and procedure codes are listed in the online Appendix, table 1. Clinical outcomes assessed in our study were length of hospital stay, complications recorded during the initial admission, hospital re-admissions, and emergency department re-presentations within 28 days of discharge that did not require hospitalisation. Post-operative complications during the initial admission were defined as intestinal obstruction, intra-abdominal abscess, respiratory complications, complications affecting other systems (nervous, circulatory, endocrine, unspecified), adverse effects of therapeutic drugs, and wound infections. Re-admission to hospital for complications was distinguished from other re-admissions, and included re-admission for symptomatic conditions (abdominal pain, nausea, vomiting). Re-presentations to an emergency department by patients with post-operative gastrointestinal symptoms (gastroenteritis, abdominal pain) or wound infections within 28 days of discharge were identified. Composite outcomes (intestinal obstruction, intra-abdominal abscess, wound infection, any post-operative complication) were also examined separately for initial admission and within 28 days of discharge.

The population trends in age-specific rates of appendicectomy (population data were obtained from the Australian Bureau of Statistics7) and the proportion of laparoscopic appendicectomies in the study population were evaluated by hospital type and broad age groups (under 9 v 9–15 years of age). The overall trend in inter-hospital transfers was assessed in Cochran–Armitage tests. Patient and operation characteristics were summarised in contingency tables. The associations between appendicectomy type and post-operative outcomes during the initial admission and within 28 days of discharge were assessed in χ2 tests, stratified by appendicitis type (uncomplicated, complicated). Stratification was applied to univariate and multivariate analyses using binary generalised estimating equations with a logit link and exchangeable correlation to estimate the odds of intestinal obstruction, intra-abdominal abscess, wound infections, and any post-operative complications after laparoscopic and open appendicectomy, corrected for patient and operation characteristics and clustering within individual hospitals. We also conducted a sensitivity analysis for the multivariate analysis of complicated appendicitis by excluding patients with diagnoses of acute appendicitis with localised peritonitis (ICD-10-AM, K35.3); this code was introduced during the study period (in 2009). P < 0.05 was deemed statistically significant. All analyses were conducted in SAS 9.4 (SAS Institute).

The proportion of laparoscopic appendicectomies increased with the age of the children (2002–2013: 0–4 years, 28%; 12–15 years, 56%); it was greater for children from the most disadvantaged backgrounds than for those from the most advantaged (57% v 45%), and greater for girls than boys (55% v 44%) (Box 2). The increased use of laparoscopic appendicectomy for both complicated and uncomplicated appendicitis applied to all hospital types (for trend, P < 0.001); in 2013, it was employed by tertiary paediatric, metropolitan and private hospitals in more than 90% of cases, and in 71% of cases in regional and rural hospitals (online Appendix, figure 1B).

A total of 2888 children (12% of cases) were transferred from the initial presenting hospital, most frequently to tertiary paediatric or regional hospitals. The proportion of children under 9 years of age transferred to tertiary paediatric hospitals increased until 2010, after which it declined; there were no consistent trends for transfers to other hospital types or for older children (online Appendix, figures 2A and B).

For children with uncomplicated appendicitis, the post-operative complication rate after laparoscopic appendicectomy was higher than for open appendicectomy (7.4% v 5.8%), chiefly because the rates of re-admission (5.0% v 4.1%) and re-presentation to EDs were higher (4.6% v. 3.0%) (Box 3).

Children under 9 years of age were more likely to have a complication than those aged 12–15 years; those with pre-existing conditions or co-existing intra-abdominal diagnoses at time of operation were more likely to have complications than those who did not. After adjusting for patient and surgery factors, there was no association between type of operation and having any post-operative complications (laparoscopic v open appendicectomy: adjusted odds ratio [aOR)], 1.13; 95% confidence interval [CI], 0.98–1.30) (online Appendix, table 4).

Laparoscopic appendicectomy was associated with lower odds of intestinal obstruction (aOR, 0.59; 95% CI, 0.36–0.97), but not of intra-abdominal abscess or wound infections (Box 4).

The post-operative outcome rates we report are only partially consistent with the findings of the most recent relevant systematic review, which pooled the results of 19 studies (2000–2011) encompassing 107 000 children.5 For children with uncomplicated appendicitis, the authors of the systematic review found no differences between the two operation types with regard to the overall incidence of post-surgery complications and the odds of intestinal obstruction.5 The differing findings regarding the latter might reflect different definitions of bowel obstruction and different levels of follow-up. An earlier meta-analysis found a 50% reduced risk of bowel obstruction after laparoscopic appendicectomy in children.13

We found that the outcomes for children managed in metropolitan, regional or rural general hospitals were not different from those for children who were treated in tertiary paediatric hospitals, regardless of age. This is consistent with findings of similar post-surgery outcomes for high, medium and low volume children’s hospitals in California.3 Another Californian study found no effect of age on post-operative wound infection and intra-abdominal abscess rates following complicated and uncomplicated appendicitis.15

Our results have important implications for managing emergency surgery for children. During the middle of the first decade of this century, children in NSW with non-complex emergency surgical conditions, such as appendicitis, were often transferred from metropolitan general hospitals to tertiary paediatric hospitals.16,17 In response to this problem, a statewide paediatric surgery framework was proposed in 200818 and adopted in 2014.19 The framework aimed to facilitate the care of children with non-complex emergency surgical conditions at metropolitan general hospitals, reducing waiting times, delays in appropriate care, and unnecessary travel or hospital transfers for the families of children who required an appendicectomy. We found an encouraging reduction in the proportion of children transferred to paediatric tertiary hospitals since 2010, which suggests a positive response to this framework by non-paediatric hospitals. Our findings indicate that the framework is safe, supporting the recommendation to further lower the age threshold at non-paediatric hospitals to 8 years.

The main strength of our study is its analysis of large, record-linked population-based datasets, providing robust and generalisable results. This is the first investigation of post-appendicectomy presentations to emergency departments. One limitation is that we did not have pathology information that confirmed the diagnosis of appendicitis; however, we restricted our analysis to children with a primary diagnosis of appendicitis to mitigate this potential bias. Further, we did not have information about whether appendicectomies were performed by paediatric or general surgeons. However, the emergency services provided by paediatric surgeons outside tertiary paediatric hospitals are very limited in NSW. Results from a recent systematic review suggest that there are no differences in the rates of post-surgery complications, re-admissions, and mortality following appendicectomies in children performed by general and paediatric surgeons.20 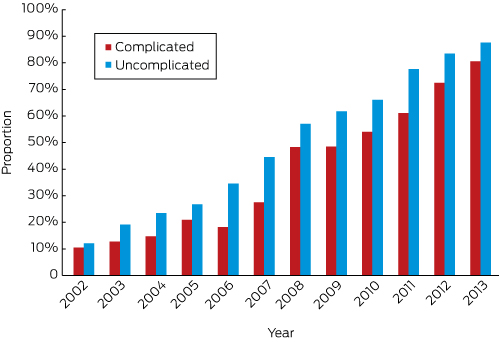 Box 2 – Patient and surgery characteristics for appendicectomies for appendicitis in children under 16 years of age, New South Wales, 2002–2013*

Box 3 – Outcomes of appendicectomies for appendicitis in children under 16 years of age, New South Wales, 2002–2013

Box 4 – Simple and multivariate analysis of complications by operation mode

We thank the NSW Ministry of Health for providing access to population health data, and the NSW Centre for Health Record Linkage for linking the datasets. The findings and views reported in this study, however, are those of the authors. This work was funded by a National Health and Medical Research Council (NHMRC) Project Grant (APP1047263). Natasha Nassar was supported by an NHMRC Career Development Fellowship (APP1067066).