Objectives: To investigate the organisation and characteristics of general practice in Australia by applying novel network analysis methods to national Medicare claims data.

Participants: About 1.7 million patients per year.

Conclusions: During 1994–2014, Australian GP practice communities have generally increased in size, but continuity of care and patient loyalty have remained stable. Our novel approach to the analysis of routinely collected data allows continuous monitoring of the characteristics of Australian general practices and their influence on patient care.

The known There are no systematically reported national data on the structure and characteristics of general medical practice in Australia.

The new Network analysis of 21 years of Medicare claims indicates that general practice communities have generally increased in size, continuity of care and patient loyalty have remained stable, and greater sharing of patients by GPs is associated with greater patient loyalty.

The implications Our new approach to analysing routinely collected data allows continuous monitoring of the characteristics of Australian general practices and how these characteristics affect patient care.

A strong primary care system that delivers appropriate care at the right time and in the right place is the bedrock of the Australian health care system. General practitioners are the major providers of primary care and serve as gatekeepers to specialist care and other components of the health care system. Almost all GP services are provided privately on a fee-for-service basis. Rebates are provided to patients by the national health insurance scheme according to the Medicare Benefits Schedule (MBS), and patients may seek care from several providers and at multiple locations. However, there is a dearth of information on the organisation and characteristics of Australian general practice. For example, the proportion of general practices that are accredited has not been reported since 2011,1 as the total number of practices is not known.

Since the final Annual Survey of Divisions (ASD) in 2011–12,2 national data on the structure and characteristics of general practices have not been systematically reported. The Bettering the Evaluation and Care of Health (BEACH) survey3 was the only national study of general practice activity, describing the characteristics and activity of a representative sample (13% of practising GPs), but the program ended in 2016. The Medical Directory of Australia (MDA), published by the Australian Medical Publishing Company (http://www.ampco.com.au/mda-online), publishes estimates of the size of the GP workforce, but their data are based on mailing addresses, which do not necessarily match practice location. The National Health Workforce Dataset (NHWDS) includes data based on a survey voluntarily completed by practitioners during their annual registration, but it focuses on practitioners, not practices.4 Claims for subsidised services in the MBS are made on the basis of Medicare provider numbers, but, as practice location is not routinely linked, MBS data provide no information about practice activities.

Efforts to understand the complex determinants of the quality of and variations in health care have led to the emergence of a new research approach, the application of data-driven methods to identifying and characterising networks of health care providers. A network is a set of people or groups of individuals, organisations, or other entities (“nodes”) with a pattern of interactions (“edges”).5 Administrative claims data have been analysed in the United States to investigate variations in the characteristics of patient-sharing networks,6,7 how these naturally occurring networks of providers are related to variations in health care costs, and quality of care.8,9

In this article, we report the first study to apply network analysis of national Medicare claims data in Australia to derive provider practice communities (PPCs); that is, groups of providers who share patients with each other to a greater extent than with other provider groups, as in group general practices (although a PPC does not necessarily correspond directly with a specific group practice). Using Medicare claims for the 21-year period 1994–2014 and a novel graph-partitioning algorithm, we examined trends in the number of PPCs and their characteristics, including size, bulk-billing rate, continuity of care, patient loyalty, and patient sharing.

We analysed data drawn from publicly released datasets of all MBS claims during the 21-year period 1994–2014 for a random sample of Australian residents (downloaded from www.data.gov.au on 26 August 2016). These datasets were constructed by selecting patients with a Medicare patient identification number ending in the same digit, resulting in an unbiased sample comprising 10% of patients who claimed Medicare services during the reference period.10 Claims for unreferred visits to GPs in consulting rooms during normal hours (MBS items 3, 23, 36, 44, 52, 53, 54, 5711) for each year were used for constructing networks.

We constructed bipartite provider–patient networks, including two node types (providers and patients), with edges indicating at least one consultation of a patient with a provider.5 Locations of providers who worked at multiple locations were treated separately for the process of finding communities. PPCs were identified after network construction by graph partitioning or cluster identification.5 We identified PPCs with hierarchical stochastic block modelling,12 clustering GPs and patients into blocks using likelihood maximisation. In comparison with the traditional method of modularity maximisation, this technique is more robust for a very large graph and can overcome the problem of resolution limit, allowing small blocks to be detected.13 Further details on our methods are included in the online Appendix.

We calculated descriptive statistics for claims, patients, providers, and PPCs for each calendar year, but present full results only for the years 1994, 1999, 2004, 2009 and 2014. Statistics related to claims and patients per provider or PPC were inflated by a factor of 10 to account for the sampling of the claims data.

Network construction and graph partitioning were performed with the Python package graph-tool (https://graph-tool.skewed.de/); other analyses were performed in R 3.3.2 (R Foundation for Statistical Computing).

Ethics approval was not required for our analysis of de-identified MBS data.

Our study is the first to analyse Australian Medicare claims data — and internationally the first to analyse a whole-of-population national sample — to construct real world GP provider–patient networks, to identify communities of GP providers, and to explore the characteristics of these communities, including novel metrics for describing patient sharing that can be generated only by network analysis.

Ours is also the first study of medical provider networks to apply a novel hierarchical block modelling algorithm that can effectively overcome the structural and computational hurdles associated with large scale data. For example, common modularity-based methods of network construction may have limited capacity to detect small communities when using large samples; as a result, previous network analyses of physicians have created “communities” of hundreds or thousands of practitioners.6,9 Moreover, studies of provider communities in the United States have included only a subset of the population (eg, US Medicare beneficiaries aged 65 or more),8,9 while Australian studies have been limited to private health insurance claims for in-hospital care.14,15

No contemporary data for the number of general practices in Australia have been published with which we could compare our findings. The total number of PPCs for 2009 generated by our analysis (7192) was similar to the estimated number of practices reported by the ASD for 2009 (7123, based on unique locations).16 However, the number of providers in our data (27 303 in 2009) exceeded the ASD estimate (23 518).16 The number of providers in our 2014 data was also slightly higher than published by the Department of Health17 and the Royal Australian College of General Practitioners,18 possibly reflecting our inclusion of some specialists who claimed GP-like consultation items.

Similarly, there are no recent comparable data on the sizes of general practices in Australia. The distribution of PPCs in 2009 according to number of providers differed from the ASD estimates: in our data, the proportions of PPCs with one, 2–5, or 6 or more providers were 41%, 21% and 38% respectively, compared with 35%, 44% and 21% of ASD practices.16 These differences underscore the fact that PPCs are constructs based on the patterns of interaction between providers and patient populations, rather than representing employment or business relationships. For example, locums who see substantial numbers of patients may be included in a PPC but not be included in a practice survey.

Our data indicate that GP PPCs in Australia have grown in size, while the median number of claims per patient per year has remained stable over the past 20 years. These findings probably reflect a growing preference for flexible working hours, a higher proportion of part-time medical providers, and increasing corporatisation of practice ownership.19 Our findings on trends in bulk-billing are consistent with the reported drop in the number of bulk-billed claims to a record low in 2003–04,20 before increasing after bulk-billing incentives were introduced (“Strengthening Medicare”) in 2004.21

Usual provider continuity of care and patient loyalty were both stable during 1994–2014; earlier population-level data for Australia are not available. The proportions of patients who saw the same provider for at least 75% of consultations (2014: 50%) or a provider in the same PPC for at least 75% of consultations (78%) were lower than estimates based on survey self-report; for example, in 2014–15, 98% of Australian patients aged 45 or more indicated that they had a usual GP or usual place of care.22 However, differences in methods mean that these figures are not directly comparable.

We found that the density of patient sharing within a PPC was positively correlated with patient loyalty. The relationships between such metrics and patient outcomes could be investigated with the aim of informing practice design; for example, for developing team-based GP care models. Further, the high level of patient loyalty we found has implications for the design of incentive programs for encouraging quality primary care if their success relies on the patients’ choice of practice.

The analysed data covered only the claims of 10% of all patients for the most commonly used GP item numbers; some providers (especially those with very few claims) may have been omitted. Moreover, there were no external standard data with which we could compare our findings. Including some specialists who claimed GP-like consultation items may have inflated the number of practitioners included in our analysis. PPCs may not be identical with bricks-and-mortar medical practices or business entities, as they are constructed solely according to patterns of patient sharing. Comparison of our PPCs with provider and practice locations in the Department of Health database would be enlightening. However, we analysed real world data, and our study can be readily replicated and was not subject to selection and non-response bias, in contrast to Australian surveys of general practice activity.2-4 Further, PPCs offer a new approach to detailed exploration of our general practice system while preserving GP and practice confidentiality.

The novel data-driven methods we have developed provide a new toolkit for primary care research in Australia that maximises the power of big data analysis. These methods will allow ongoing exploration of the structure and characteristics of general practice, and of medical provider communities more broadly, as well as of how both PPC- and provider-level factors influence the care that patients receive. Priorities for future analyses include exploring how PPC characteristics are related to the quality and quantity of care received by the PPC patient population, and to measures of unnecessary clinical variation.23 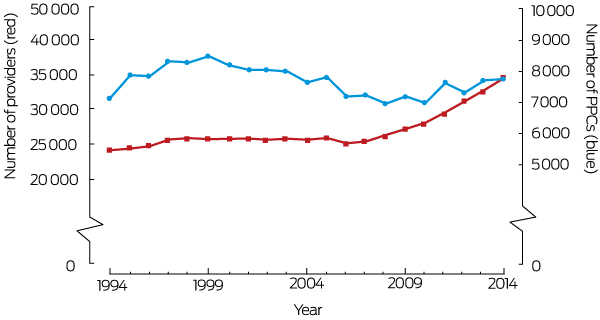 Box 3 – Proportions of general practitioners working in provider practice communities (PPCs) of different sizes, according to most common practice location, 1994–2014 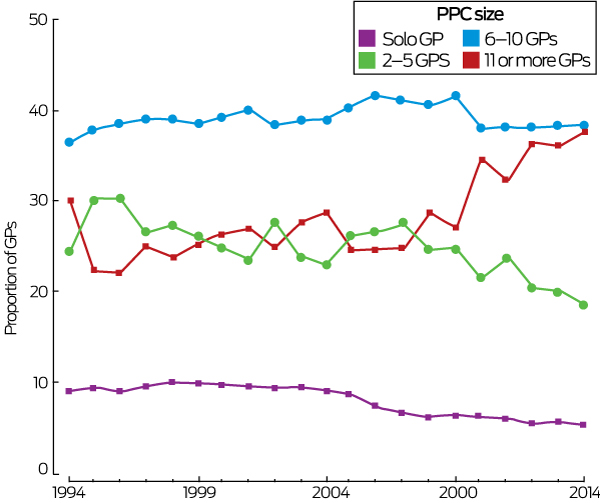 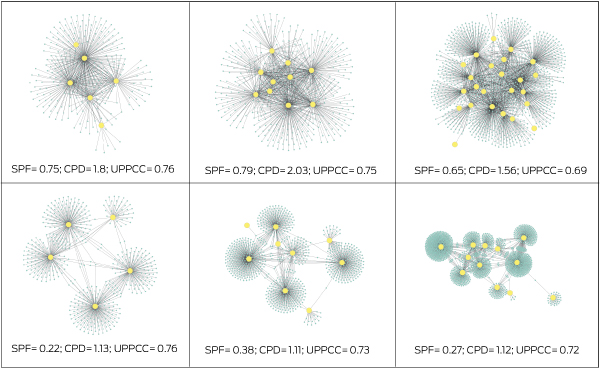 Box 5 – Characteristics of the services provided to patients by general practitioner providers and in provider practice communities (PPCs) in a 10% sample of Medicare beneficiary data, 1994–2014