Effective responses to public health hazards often require public engagement in the communication of risks and prevention measures. For acute risks, such as cases of measles, food-related disease outbreaks or environmental hazards, this requires rapid dissemination of key messages to large numbers of people who may be widely dispersed, but who often share specific characteristics that make them particularly vulnerable to the identified risk. Health authorities have traditionally relied on the mainstream media for broadcasting warnings, but the interest of the media in such matters is variable, information may not reach those most at risk, and it is not always possible to rapidly assess the impact of the message on its intended audience.

Social media channels have been used in public health to promote behavioural change, to encourage policy change, and to gather surveillance data.1,2 For many people, social media platforms are now their primary sources of information and social connectivity, but the potential for reaching at-risk groups in a targeted manner through the built-in promotional and analytic tools of these channels has been underexploited.3

The Public Health Unit, South Eastern Sydney Local Health District, has had a social media presence since September 2014. In January 2017, Ross River virus was detected in mosquitoes trapped at Georges River in southern Sydney, increasing the risk of infection for local residents and visitors. To alert those at risk, we used a Facebook “boosted post”. For a fee, Facebook pushes boosted posts to users who, according to their Facebook and internet histories, are more likely to be interested in the item advertised in the post, usually a commercial product. Our alert (Box) was boosted to Sydney-based users aged 18–65 years whose internet usage suggested interest in nature, beaches, fishing, mosquitoes, mountaineering, sports and outdoors, or home and garden; the budget was set at $50.

Over the 7-day campaign, the post was viewed by 294 148 people, of whom 16 751 (5.7%) were members of the target group. Users responded to the post with reactions, clicks, comments, or shares on 13 016 occasions, 930 (7.1%) of which were by members of the target group, reached as a direct result of the paid boost. This means that people at greatest risk of infection — because they were likely to participate in fishing or other activities on the water — read the post and actively engaged in disseminating the information. In total, the cost per result (reach or engagement) was 0.05 cents (calculated by Facebook). Among the target group, women interacted more than twice as frequently as men (641 of 930 engagements, 68.9%), often sharing the post with male friends to encourage them to protect themselves. Importantly, the community self-selected individuals at risk by tagging friends in the post, greatly increasing the reach of the alert to those at risk.

Unlike responses to messages in traditional media, the intended behavioural change was instantly measurable: of 808 comments on the post, 47 users (5.8%) indicated they would change planned river-related activities, and 71 (8.8%) that they would take other preventive measures (eg, use mosquito repellent).

Careful evaluation of social media campaigns is important for understanding which platforms and methods increase benefit and minimise risk.2 Our campaign shows how social media can be used for a public health benefit. It also illustrates the potential of social media to change the face of public health messaging and to markedly improve the measurable adoption of protective behaviours. 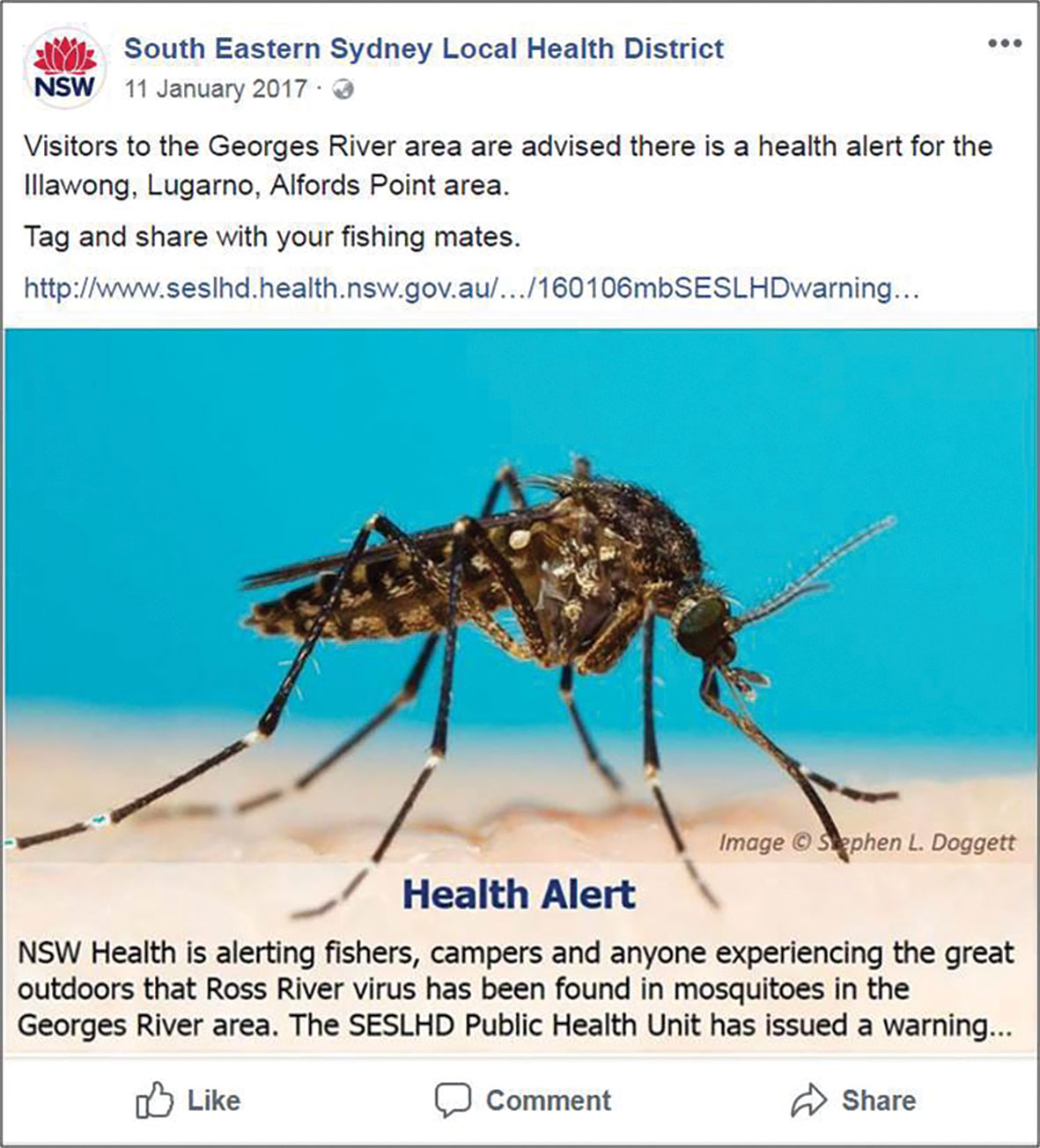