Following chorioamnionitis, a male infant from a remote Indigenous community was born by vaginal breech delivery at 26 weeks’ gestation. On Day 5, indurated, vesicular and erythematous lesions were noted on extensive areas of the back (Box, A and B). Blue light (450–475 nm) phototherapy had been commenced on Day 1 for jaundice. Further skin lesions subsequently arose on the lips, ears and scalp, and surface scale developed on established plaques. There was no major systemic disturbance.

Considered differential diagnoses were neonatal lupus erythematosus, cutaneous or systemic bacterial or fungal infection and malignant or infiltrative disorders. After a skin biopsy for histopathology and culture, bacterial swabs and skin scrapings, empiric intravenous antibiotics and amphotericin were commenced on Day 6.

Initial intravenous antimicrobials were ceased and treatment was limited to topical clotrimazole cream from Day 14, with rapid, dramatic improvement and clearance of cutaneous signs. His hospital progress was uneventful, with no recurrence of rashes. Maternal examination revealed extensive areas of tinea on forearms, neck and torso. She was treated with topical clotrimazole and subsequently topical terbinafine creams with resolution of her skin changes.

Despite tinea corporis being rarely reported in neonates,1,2 there have been four recent confirmed cases (unpublished) due to Trichophyton rubrum in infants while hospitalised in neonatal intensive care units. In all cases T. rubrum was also detected on their Indigenous mothers, who resided in remote Northern Territory communities. Chronic tinea corporis is endemic in these regions both in adults and children.3

It is speculated that the impaired barrier function of the skin of premature infants,4 immature microbiome and suboptimal immune responses allow aggressive dermatophyte spread during initial maternal-infant skin-to-skin contact,5 with subsequent atypical clinical manifestations. The long term consequences of this early exposure and infection on later immune responses to fungal organisms are uncertain.

Clinicians are encouraged to consider the diagnosis of tinea corporis even in the absence of typical marginated scaling or slow annular progression of neonatal rashes. When assessing defined rashes with scaling, the primary investigation undertaken should be skin scrapings taken from lesional edges for fungal analysis. Microscopy results are sensitive and specific and available within minutes. Subsequent fungal culture and speciation provides opportunity to identify the source of infection and direct contact and public health interventions. This is particularly relevant when treating pre-term infants from areas and populations where chronic fungal skin infections are endemic and often asymptomatic. 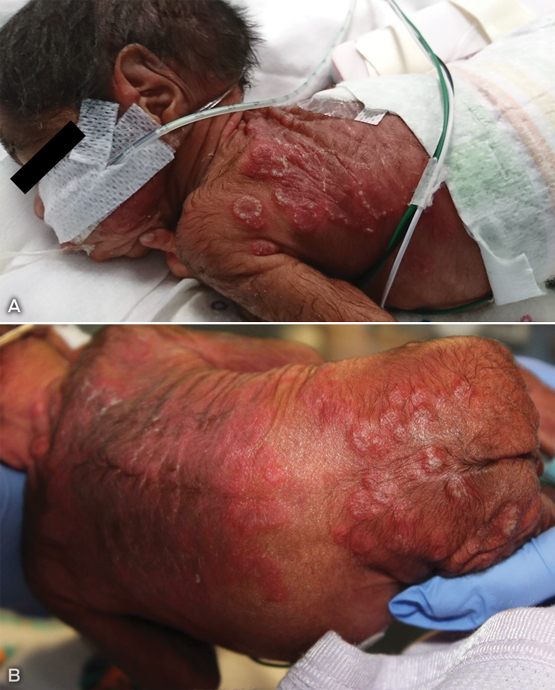