Objective: To compare the current rate of antibiotic prescribing for acute respiratory infections (ARIs) in Australian general practice with the recommendations in the most widely consulted therapeutic guidelines in Australia (Therapeutic Guidelines).

Design and setting: Comparison of general practice activity data for April 2010 – March 2015 (derived from Bettering the Evaluation and Care of Health [BEACH] study) with estimated rates of prescribing recommended by Therapeutic Guidelines.

Conclusions: Antibiotics are prescribed for ARIs at rates 4–9 times as high as those recommended by Therapeutic Guidelines. Our data provide the basis for setting absolute targets for reducing antibiotic prescribing in Australian general practice.

The known Antimicrobial drug resistance is a global problem, and reducing antibiotic use is the most important clinical response. Australian GPs are reported to overprescribe antibiotics, but the extent has not been quantified.

The new New acute respiratory infections (ARIs) accounted for 51% of all new problems in general practice managed with an antibiotic. Had GPs adhered to widely consulted antibiotic prescribing guidelines, the rate of prescription would have been 11–23% of the current rate (an estimated 0.65–1.36 million prescriptions per year nationally, instead of 5.97 million).

The implications Antibiotic prescribing in Australian general practice could be substantially reduced were GPs to adhere more closely to guideline recommendations.

Acute respiratory infections (ARIs) are among the most frequently managed problems in Australian general practice.1 Antibiotics were once the mainstay of treatment, but it is now recognised that any benefits are often outweighed by their harms (adverse drug reactions, financial costs, antibiotic resistance).2 International guidelines consistently advise against routinely prescribing antibiotics for several ARIs, including acute bronchitis, most cases of acute pharyngitis and acute rhinosinusitis, and influenza.3-5 Diagnostic uncertainty, beliefs of clinicians and patients about antibiotic resistance and antibiotics, and a lack of evidence-based alternative treatments mean, however, that antibiotics continue to be prescribed at high rates.6,7 About 97 million outpatient visits in the United States annually result in antibiotic prescriptions, 41% of them for ARIs.8 Antibiotic consumption is even higher in Australia: in 2010, 87 antibiotic doses (units) were dispensed per person, compared with 22 per person in the US.9 Overprescribing of antibiotics for ARIs in Australian general practice probably contributes to this high rate, and the Australian Strategic and Technical Advisory Group on Antimicrobial Resistance (ASTAG), advising the Australian government, has called for national benchmarks for antibiotic prescribing.10 The level of overprescribing for ARIs in general practice has not been quantified.

We used ARI management data collected in general practice during April 2010 – March 2015 by the Bettering the Evaluation and Care of Health (BEACH) program. BEACH is a continuous cross-sectional survey of the clinical activity of GPs in Australia; its methods have been reported elsewhere.1 In brief, each year a random sample of about 1000 GPs report details for 100 consecutive encounters with patients (with the patients’ consent). The data collected in structured paper forms include the problems managed (classified post hoc by trained clinical coders according to the International Classification of Primary Care, version 2 [ICPC-2]11) and medications prescribed (classified according to the Anatomical Therapeutic Chemical [ATC] classification;12 antibiotics were defined as ATC class J01, “Antibacterials for systemic use”), with direct linkage between the two datasets.1

“Problem” was defined as a statement of the provider’s understanding of the health problem presented by a patient, family or community. GPs are asked to record problems as specifically as possible on the basis of the information available at the time, and the description may be limited to recording symptoms. The problem can be classified as being new or old; we analysed only new problems (“cases” in this article). New problems are defined as the first presentation of a problem, including the first presentation of the recurrence of a previously resolved problem, but excluding the presentation of a problem first assessed by another provider.

We identified 18 potentially relevant codes in the list of ICPC-2 infections and symptoms/complaints codes collected by BEACH, ten of which we agreed corresponded to ARIs (Box 1); eight symptom codes were excluded because they could be related to non-ARI diagnoses and were used infrequently (online Appendix, table 1). Therapeutic Guidelines: Antibiotic and Therapeutic Guidelines: Respiratory3,5 include nine ARI diagnoses that are defined slightly differently. We assigned one or more of the ten ICPC-2 codes to each guideline diagnosis, resulting in eight included ARI diagnoses (Box 1).

We extracted the number of cases for each diagnosis and the number treated with one or more systemic antibiotics per 100 total encounters for each of the ten ICPC-2 codes in Box 1. This allowed us to estimate the numbers of cases and the number for which antibiotics were prescribed in general practice both per full-time equivalent (FTE) GP (calculated by the Australian Institute of Health and Welfare from hours worked, as collected at annual registration from each GP; assuming an FTE of 40 hours/week) and nationally per year.

Estimated rates of antibiotic prescribing had GPs adhered to guidelines

We identified primary studies for determining the proportions of patients with each infection who satisfied antibiotic use criteria by searching: studies in relevant Cochrane reviews;13-15 PubMed, to identify studies of any design conducted in Australia between 2010 and July 2015 (search strategy: online Appendix, table 3); reference lists of review articles and systematic reviews; and our personal libraries. We contacted authors of primary studies to seek additional data when necessary.

The complete data for calculating guideline estimates are included in the online Appendix, tables 4–6).

For each diagnosis, we calculated (nationally, and per FTE GP/year):

The eight ARIs accounted for 22 596 of 44 434 all new cases (50.9%) managed with at least one antibiotic (for any indication, respiratory or non-respiratory). Acute rhinosinusitis accounted for 20.9% of all problems managed with an antibiotic, acute bronchitis/bronchiolitis for 14.4%, acute otitis media for 6.9%, acute pharyngitis or tonsillitis for 6.2%, community-acquired pneumonia for 1.3%, laryngitis for 0.5%, pertussis for 0.5%, and influenza for 0.2%.

Had they adhered to guideline recommendations, GPs would have managed 6–13% of new cases of ARI with an antibiotic, equivalent to 0.65–1.36 million cases each year, or 25–52 cases per FTE GP (Box 3); this rate is 11–23% of the current actual rate. Antibiotics were prescribed more frequently than recommended by guidelines for acute rhinosinusitis, acute bronchitis/bronchiolitis, acute otitis media, and acute pharyngitis or tonsillitis (Box 4).

In this sample of Australian GPs, an estimated 5.97 million new cases of ARI per year accounted for half of all new problems managed with an antibiotic, equivalent to an estimated 230 cases per FTE GP/year. Three studies that investigated the prescribing of antibiotics for ARIs in Australian general practice reported similar findings; their results differed slightly because different diagnostic codes were included.19-21 A study in the US found a similar overall antibiotic prescribing rate for all conditions (221 per 1000 population)22 to our Australian data (254 per 1000). The US report found antibiotics were overprescribed for ARIs by about 100% when compared with guideline recommendations;22 our estimates suggest that overprescribing is greater in Australia (by 148–418%). Possible explanations for the different estimates by these studies include differences in diagnostic labels and guideline recommendations. Unlike the American guidelines,4 for example, Australian guidelines do not recommend testing for group A streptococcal infections in patients presenting with acute pharyngitis or tonsillitis, but both guidelines nevertheless suggest that up to 40% of these patients should be treated with antibiotics.22

Our findings suggest that antibiotics are overprescribed for treating patients with ARIs. Diagnostic uncertainty — concern by the treating doctor that a serious infection or complication might be missed — is one potential explanation for this finding;6 for example, clinicians overestimate the rate of infectious complications of acute otitis media (mastoiditis) and tonsillitis (peritonsillar abscess).23 Data from a high quality cohort study in the United Kingdom found that reducing the rate of antibiotic prescribing was not associated with increased rates of mastoiditis, empyema, bacterial meningitis, or intracranial abscess.24 The investigators found a slight increase in the rates of pneumonia and quinsy, but the effect size was small; each 10% reduction in antibiotic prescribing was associated with one additional case of pneumonia per year and one case of quinsy per decade per practice of 7000 patients.24

In our study, antibiotics were prescribed slightly less frequently than recommended for community-acquired pneumonia and pertussis. Possible explanations for these unexpected findings could be that GPs refer patients with community-acquired pneumonia to hospital, but manage patients with cough that persists for more than 3 weeks but with only a weak presumption of pertussis.3

We obtained data on antibiotic prescribing from the BEACH cross-sectional study of Australian general practice activity. BEACH diagnosis and treatment data are considered robust: clinicians record the problems managed or diagnosed at each encounter in free text, and a team of trained clinical coders assigns appropriate ICPC-2 codes. However, clinicians may record diagnoses they believe warrant treatment with antibiotics more than those that do not,25 by recording for example, “community-acquired pneumonia” rather than “acute bronchitis/bronchiolitis”. This, however, seems unlikely, given the low rates of community-acquired pneumonia recorded. Participating clinicians are also asked to record the problem at the highest level possible on the basis of the available evidence; ie, an acute exacerbation of chronic obstructive pulmonary disease (COPD) should be recorded as “COPD” rather than “acute bronchitis”. It is possible that such cases were misclassified, but the effect would probably be small.

Data collected by the BEACH study may have been subject to selection bias. If GPs who adhered to guidelines were more likely to participate in BEACH because they were less likely to avoid scrutiny, actual antibiotic prescribing rates may have been underestimated.

Antibiotics are prescribed for ARIs at rates 4–9 times as high as those recommended by clinical guidelines. The potential for reducing rates of antibiotic prescription and to thereby reduce rates of antibiotic-related harms, particularly bacterial resistance, is therefore substantial. Our data provide the basis for setting absolute targets for reducing antibiotic prescribing in Australian general practice. 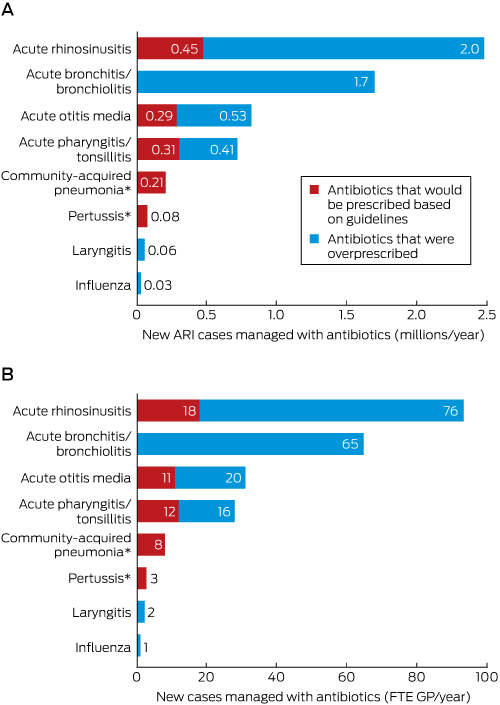 Numbers have been rounded for clarity of presentation. * The numbers of cases of community-acquired pneumonia and pertussis managed with antibiotics were lower than the estimated number recommended by the guidelines.

This investigation was supported by the Centre for Research Excellence in Minimising Antibiotic Resistance from Acute Respiratory Infections, funded by the National Health and Medical Research Council (1044904).

Between April 2010 and March 2015, the BEACH program was funded by the Australian Government Department of Health and Ageing, the Australian Government Department of Veterans’ Affairs, AstraZeneca (Australia), bioCSL (Australia), Novartis Pharmaceuticals Australia, AbbVie, Merck, Sharp and Dohme (Australia), Pfizer Australia, GlaxoSmithKline Australia, Sanofi-Aventis Australia, Bayer Australia, and the National Prescribing Service. The funding bodies did not influence the concept, design or conduct of the research, nor the preparation of this article; no financial support was provided for preparing the manuscript. Christopher Del Mar has received funding (personal and institutional) from the Australian Commission for Safety and Quality in Health Care (ACSQHC) and British United Provident Association (BUPA) for consulting (regarding shared decision making).