The gap reversed: a review of site of death in the Top End

Most people would prefer to die at home, but 86% of Australians die in institutions, a greater proportion than in comparable countries.1 Despite significant expenditure on health care during the final year of life ($5 billion), only a small proportion ($100 million) is spent assisting people to die at home.2

Indigenous Australians comprise 2.5% of the population of Australia, but 32.5% of people in the Northern Territory. Studies have documented the critical importance for Indigenous people from rural and remote areas of “finishing up” (the culturally appropriate reference to death and dying) on “country” (ancestral community and lands).3 Transferring sacred knowledge, providing culturally appropriate care, and returning their “animal spirit” to the land are all facilitated by dying on country.3,4 Finishing up on country in rural and remote NT usually takes place in dwellings in the person’s ancestral community and lands, either in their own home or the home of a relative or close community member who has assumed responsibility for their care.

Territory Palliative Care–Top End (TPCTE) is the sole provider of palliative care services to the Top End of the NT. We have previously described the barriers and challenges we face in providing a culturally appropriate death on country.4 Quantitative data on sites of death of Indigenous people is scarce; we therefore undertook a retrospective cohort analysis of adults who had died in 2016 while managed by TPCTE. We collected data on Indigenous status, age, sex, and site of death (residential dwelling, hospice, residential aged care facility, metropolitan hospital, or rural or remote hospital). The proportions of deaths of Indigenous and non-Indigenous people in residential dwellings or institutions were compared (χ2 test) and expressed as a relative risk. Ethics approval was granted by the Menzies School of Health Research Human Research Ethics Committee (reference, 2017-2787).

We did not examine the reasons for the difference between Indigenous and non-Indigenous patients regarding their sites of death, but we suspect they include recognition by the community and remote clinic staff of the importance of finishing up on country, and a willingness to support this wish. The core role played by Indigenous Liaison Officers and Aboriginal Health Workers in overcoming language, cultural and world view barriers, and in facilitating care and end-of-life discussions is also important.5

There were limitations to our study: we did not control for potential confounders, such as socio-economic status and age, and we calculated only a crude relative risk. Moreover, it is important to recognise the cultural diversity of Indigenous Australians, and to acknowledge that our results may not be generalisable to all Indigenous Australians.

The Close the Gap campaign to improve Indigenous health started in 2006; more than a decade later, significant disparities in key health areas remain.6 In our study of patients receiving specialist palliative care in the Top End, it is heartening that the difference with regard to residential dwelling deaths favours Indigenous Australians. However, while facilitating finishing up on country, it is important that we continue to strive to make good palliative care available for all.

Box – Site of death of 308 Northern Territory residents who died in 2016 while managed by Territory Palliative Care–Top End, by Indigenous status 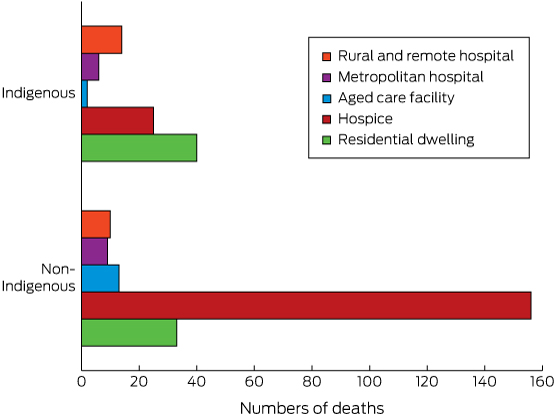 The geographic location of hospitals was defined according to the Rural, Remote and Metropolitan Areas (RRMA) classification of the Australian Institute of Health and Welfare (http://www.aihw.gov.au/rural-health-rrma-classification/; accessed Apr 2017).