Objectives: To evaluate the effect of targeted and catch-up hepatitis B virus (HBV) vaccination programs in New South Wales on HBV prevalence among women giving birth for the first time.

Conclusion: Among women giving birth, there was a significant reduction in HBV prevalence in Indigenous women associated with the introduction of the HBV vaccination program in NSW, although prevalence remains higher than among non-Indigenous Australian-born women, and it also varies by region of residence. Continuing evaluation is needed to ensure that the prevalence of HBV infections continues to fall in Australia.

The known In NSW, HBV vaccination of infants born to women at high risk commenced in 1987, and catch-up vaccination programs for adolescents in 1999.

The implications HBV prevention programs for Indigenous Australians should focus on regional and remote NSW and those for migrant populations on major cities. Antenatal HBV screening can be used to monitor population HBV prevalence and the impact of vaccination programs.

Chronic infection with the hepatitis B virus (HBV) can cause serious liver disease, and contributes worldwide to a significant burden of disease. Most chronic infections are acquired early in life, predominantly by maternal transmission.1 While its prevalence in Australia is generally considered to be low (under 2%), the prevalence of HBV infections in Aboriginal and Torres Strait Islander (hereafter: Indigenous)2 people and in some migrant populations3 has been substantial.

A three-dose vaccine that is 95% effective in preventing HBV infection4 has been available in Australia since the early 1980s.5 In New South Wales, a targeted HBV vaccination program commenced in 1987.6 The program offered vaccination for babies born to parents from population groups considered to be at higher risk of HBV infection (defined as HBV prevalence ≥ 5%), including Indigenous Australians.7 In 1997, the National Health and Medical Research Council recommended universal HBV catch-up vaccination of children aged 10–16 years;8 in NSW, this was provided from 1999 to adolescents born since 1983 by general practitioners.9 The National Immunisation Program Schedule included universal infant HBV vaccination from May 2000. During 2004–2013, this was complemented by a NSW-wide school-based HBV vaccination catch-up program for year 7 students (born since 1991; online Appendix 1).5,7 In NSW, coverage through the universal infant program was reported to have exceeded 95% since 2003,10 and about 60% of eligible children not vaccinated as infants had been vaccinated through the school-based catch-up program in 2011 and 2012.11

To assess the impact of the vaccination programs on HBV prevalence in NSW, we determined its prevalence in women giving birth, as in Australia they are routinely screened for HBV during pregnancy.12 Our methodology was similar to that used in earlier studies that linked records of women giving birth and HBV infection notifications.2,3

Data from two statutory registers were linked. The NSW Perinatal Data Collection (PDC) records all births in NSW of babies of at least 400 grams birth weight or 20 weeks’ gestation. The PDC contains details about the mother, such as year and country of birth, parity, postcode of residence, and Indigenous status, and about the birth, including the date of delivery and outcome. The NSW Notifiable Conditions Information Management System (NCIMS) is a population-based surveillance system that records reports of conditions deemed notifiable under the NSW Public Health Acts 1991 and 2010.13,14 The Act requires notification to NCIMS by any laboratory detecting HBV surface antigen (HBsAg), a marker of HBV infection, in a specimen submitted for diagnostic testing. The NCIMS records personal details, including date of birth, sex, postcode, and classification of the report as newly acquired hepatitis B infection or infection of unspecified duration (based on standard definitions15), notification date, and either the estimated onset date or date of the diagnostic test.

PDC records of women giving birth between January 1994 and December 2012 and NCIMS HBV notifications for the same period were available. Records from the two registers were linked by probabilistic matching of personal identifying details; this was conducted by the NSW Centre for Health Record Linkage (CHeReL), independently of the study investigators, to whom de-identified, linked data were provided for analysis. The reported false positive and negative rates for CHeReL linkage are about 0.5%.16

After linkage, we restricted our study population to women resident in NSW — using their postcode on the PDC record — of reproductive age (10–55 years at time of giving birth) who gave birth to their first child (ie, parity null) between January 2000 (when routine antenatal screening for HBV began17) and December 2012.

A woman was defined as having a chronic HBV infection at the delivery of her first child if there was at least one linked HBV notification in the NCIMS database that was recorded as unspecified and with a notification date earlier than the delivery date. Women with no linked HBV notifications were assumed to be not infected with HBV. Women with an HBV infection notified as being acute were excluded from the analysis, as it was unknown whether they would have cleared their acute infection or progressed to a chronic infection.

We also classified the women as Indigenous Australian, non-Indigenous Australian-born, or overseas-born women, based on their PDC record. For Indigenous status, we enhanced reporting in the PDC by linkage to other PDC records.18 Records with missing country of birth data (2090 records, 0.4% of all records) were placed in the “born overseas” category.

We calculated crude HBV prevalence for the four maternal year-of-birth categories, and used logistic regression to examine the relationship between these categories and HBV infection. We adjusted analyses for year of giving birth (in 5-year intervals) to account for possible temporal trends in HBV prevalence,2 and for the mother’s area of residence (two categories, based on residential postcode in the PDC record: major cities and regional/remote, according to the Accessibility/Remoteness Index of Australia19), as HBV prevalence in Australia varies between regions.3 The two most recent maternal year-of-birth categories (1988–1991, 1992–1999) were combined (1988–1999) for the logistic regression analysis because the numbers of records in the individual groups were small.

A lack of consistent trend in HBV notifications among non-Indigenous Australian-born women might be expected, as the notification rate in this population before the introduction of vaccination was considerably lower than for Indigenous women. Further, most non-Indigenous women born during 1988–1999 would have been eligible only for school-based catch-up vaccination, which is less effective in preventing chronic disease than infant vaccination. Interpreting the relationship between birth cohorts and HBV prevalence in overseas-born women was complicated by a number of factors, including the differing prevalence of HBV in the regions from which overseas-born women migrated, their age at migration, and the lack of information about receipt of vaccination in their country of origin. When analysed by region of origin, the observed changes in notification rates could reflect either varying local uptake of infant HBV vaccination or differences in the populations that have migrated to Australia from particular regions over the 13-year study period. The smaller numbers of women involved in each group, however, limit our ability to draw conclusions.

The higher prevalence of HBV among urban than regional non-Indigenous women may be related to the higher proportions of women in cities who inject drugs or are in prison, both risk factors for acute HBV infection.26 For women born overseas, the difference might be related to the fact that a greater proportion of migrants from high HBV prevalence countries (such as Asia) reside in urban than in regional and remote areas (online Appendix 3).27

It was not possible in our ecological study to take into account interactions between the effects of age and calendar year on HBV notification. Women who were born more recently, and therefore more likely to have been vaccinated, would have been younger at the time of our linkage, but also potentially subject to different risks of exposure at a given age. Including the year a woman gave birth as a factor in the regression model for Indigenous Australian women led to a small reduction in the effect of maternal birth year on HBV prevalence, and HBV prevalence was lower for more recent year of giving birth, after adjusting for maternal year of birth (Box 2). This suggests that temporal trends other than the effect of maternal birth year may have contributed to the decline in HBV notifications for Indigenous Australian women, although residual confounding related to inadequate adjustment for maternal birth year effects cannot be excluded. A similar trend, but of smaller magnitude, was seen among overseas-born women.

Antenatal screening for HBV infection enabled us to systematically assess HBV prevalence in a large population of women. Study limitations include our focus on women giving birth; our conclusions may not be generalisable to other women or to men, but we expect that the overall trends would be similar. We were unable to assess the impact of universal newborn vaccination on HBV notifications, as no women born after 2000 had given birth during the study period. Further, the ecological nature of our analyses depended on assumptions about the exposure of individuals to different vaccination strategies according to year of birth, whereas individual level vaccination data would assist us more reliably quantify their effects. Interpreting changes in HBV prevalence by country or region of birth was further limited by a lack of information about when women migrated to Australia. Some HBV notifications classified as “unspecified” may actually have been acute infections, but their frequency should not have differed between maternal birth year groups, and would therefore not have affected our estimates of HBV prevalence. Finally, linkage errors are possible, but their rate is known to be low.

Analysing routine antenatal HBV screening data is a simple and cost-effective method for monitoring changes in HBV prevalence in both the general population and in some high risk populations. The newborn and childhood HBV vaccination programs in NSW have had a significant impact on HBV prevalence in Indigenous Australian women, but it is still substantially higher than among non-Indigenous women. HBV infection prevention programs for high risk groups should be targeted differently, with those for Indigenous Australians focused on regional and remote NSW, and those for migrant populations on major cities. Finally, our analysis could be repeated periodically to assess the ongoing impact of universal newborn HBV vaccination and future targeted programs on HBV prevalence in Australia. 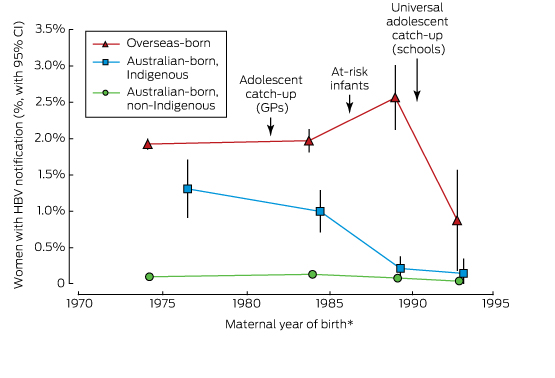 Box 2 – Association between HBV notifications* and maternal year of birth, year of giving birth, and region of residence

Box 3 – HBV notifications for non-Australian-born women giving birth for the first time, by region of birth

We thank the NSW Ministry of Health for providing the data for this study, and the NSW Centre for Health Record Linkage for conducting the record linkage. Bette Liu and John Kaldor are funded by Australian National Health and Medical Research Council Fellowships.