Is Australia prepared for the next pandemic?

Pieces of the plan are in place, but we must continue to strengthen preparedness research capacity

Infectious diseases continue to threaten global health security,1 despite decades of advances in hygiene, vaccination and antimicrobial therapies. Population growth, widespread international travel and trade, political instability and climate change have caused rapid changes in human populations, wildlife and agriculture, in turn increasing the risk of infection transmission within and between countries and from animal species.2 New human pathogens have emerged, and previously “controlled” diseases have re-emerged or expanded their range.2 In the past decade alone, the global community has experienced infection outbreaks of pandemic influenza, Ebola and Zika viruses and Middle East respiratory syndrome (MERS).

Planning for an effective response to the next pandemic is complex and requires extensive engagement between public health experts, clinicians, diagnostic laboratory staff, general and at-risk communities and jurisdictional and federal agencies. An effective response also requires access to real-time data, management of uncertainty, clear and rapid communication, coordination and, importantly, strong leadership. Are all these pieces of the plan currently in place in Australia?

The 2009 influenza pandemic tested Australia’s capacity to respond to a highly transmissible emerging infectious disease.3 Public health units and frontline practitioners around the country were affected in different ways. The pandemic reached our states and territories at different times, leading to staggered and varied responses and pointing to clear gaps and challenges in logistics and governance. Although higher than usual rates of hospitalisation and intensive care admission, particularly among Aboriginal and Torres Strait Islander people and pregnant women, were observed early in the pandemic, most cases were mild.3 As the spectrum of disease became apparent, the existing plan, which had been based on a Spanish influenza-like worst-case scenario, was modified. The focus shifted from containing or limiting the spread of disease at a whole-of-population level to mitigation strategies targeted at key risk groups.3

Alongside their roles as primary effectors of response, frontline clinical, public health and laboratory staff were required to gather key information to inform best practice. At the same time, surge capacity was limited. Given the requirement for comprehensive laboratory testing to support diagnosis and case management in the initial phases, laboratory resources in the states affected early in the pandemic were stretched beyond their limits.4 Antivirals were available but sub-optimally deployed in some areas.4 It was therefore not possible to determine the impact of antivirals on rates of hospitalisation, the need for critical care, or death in Australia, as was reported elsewhere.5 As in other settings, the pandemic vaccine only became available after the “first wave”. However, a 20% increase in the proportion of the population with antibodies to the pandemic strain, which was associated with vaccine uptake, likely contributed to low levels of disease activity in the 2010 influenza season.6

In keeping with similar exercises globally,7 the Review of Australia’s health sector response to pandemic (H1N1) 2009 identified a need for greater flexibility in implementation plans to achieve an optimal response.4 Improved data sharing and synthesis within and between jurisdictions and internationally was defined as a key priority, to enable better understanding of the situation and evolving needs, to advise evidence-based practice and to inform clear, consistent messaging. The review also recommended development of a set of overarching ethical principles, to guide resource allocation in alignment with community expectations and values and to identify feasible interventions that are not disproportionately disruptive to society (disruptive interventions include social distancing measures such as school and workplace closures or travel restrictions). Failure to engage key populations at risk, including Aboriginal and Torres Strait Islander peoples, in preparedness activities before the 2009 pandemic was recognised as a critical deficiency.4

Much has happened since 2009. The Australian health management plan for pandemic influenza, redrafted in 2014, is a nationally agreed plan for flexible and scalable responses in the health sector. It was developed in consultation with key stakeholders, including state and territory health departments and practitioner groups involved in implementing responses.8 The plan emphasises engaging with existing committees and practitioners to provide input to decision making under the leadership of the Australian Health Protection Principal Committee (AHPPC), the key decision maker in a national health emergency. Pandemic response phases and key responsibilities in Australia, as outlined in the plan, are summarised in Box 1 and described in detail elsewhere.9 The AHPPC is advised by two expert standing committees — the Communicable Diseases Network Australia and the Public Health Laboratory Network, on which states and territories are represented by their chief health officers — and by practitioner groups including the General Practice Roundtable and National Aboriginal Community Controlled Health Organisation. The plan’s recommendations on the use of infection control measures and pharmaceuticals, including antivirals and vaccines, are based on a wealth of national and international evidence emerging from the 2009 experience.8 Corresponding efforts have gone into strengthening the National Medical Stockpile and ensuring onshore vaccine manufacturing capacity to safeguard against the emergence of novel influenza strains.

However, influenza is not the only threat to Australia’s health security. Recent outbreaks of MERS and Ebola and Zika virus infections have provided opportunities for the AHPPC and key stakeholders to practise and refine coordination and communication strategies to prevent, prepare for and respond to threats posed to Australians. These new threats highlighted the need to develop response plans that are agile, can be adapted to known and unknown pathogens and syndromes and are well coordinated with international responses. The CDPLAN: Emergency response plan for communicable disease incidents of national significance, released in September 2016, provides a generic national framework for a primary response to outbreaks for which there is no pre-existing disease-specific plan.10 This plan is supported by the National framework for communicable disease control,11 a roadmap to improve national information sharing and facilitate a coordinated response to events of public health importance.

Research readiness to identify and generate key information needed in health emergencies is also crucial. The World Health Organization’s research and development blueprint, released in May 2016, draws on lessons learned from past responses to improve preparedness and reduce the time needed to make diagnostics, therapeutics and vaccines available.12 Three main approaches are required: improved coordination and an enabling environment; acceleration of research and development processes; and new norms and standards tailored to the epidemic context.12 Both pre-emptive and responsive efforts are needed. Establishment of the Global Research Collaboration for Infectious Disease Preparedness has enabled global financial support for both. This collaboration is a network of organisations that fund research,13 of which Australia’s National Health and Medical Research Council (NHMRC) is a member.

The NHMRC has recently funded four centres of research excellence (CREs) that are focused on effective information acquisition and use, laboratory diagnostics, clinical trials, modelling and community engagement. All will contribute to Australia’s emergency response to infectious diseases (Box 2). One of these CREs, the Australian Partnership for Preparedness Research on Infectious Disease Emergencies (APPRISE), was funded under a novel paradigm in July 201614 — the requirement to complete an initial, broad stakeholder consultation to achieve an agreed research plan. Central to this consultation is the development of ethical frameworks to support implementation of an emergency response, with clear emphasis on planning with (not for) key populations, including Aboriginal and Torres Strait Islander peoples. Pre-emptive activities undertaken by the four complementary CREs will promote collaboration and information sharing between researchers, frontline responders and the community, including developing pre-approved protocols for emergency response research and implementation. This process will accelerate development and testing of novel diagnostics and therapeutic interventions; facilitate rapid acquisition, collation and interpretation of clinical and epidemiological data to support decision making; and, ultimately, enhance emergency responses.

The networks established by these CREs recognise the need for an interdisciplinary and cross-sectoral approach to preparedness research and are developing local skills and capacity to support emergency responses. Critically, they represent a focal point of engagement with similar international efforts, including PREPARE (Platform for European Preparedness against [Re-]emerging Epidemics; https://www.prepare-europe.eu) in Europe, and the REACTing (Research and action targeting emerging infectious diseases) consortium in France.15 Such links enable rapid information sharing and synthesis to inform local responses. They also facilitate participation in multinational clinical trials of sufficient power to rapidly determine effectiveness of novel infection control, therapeutic and preventive interventions, including vaccines. Equally important is the trilateral engagement between researchers, public health practitioners and policy makers in defining the research agenda. Priority needs are linked to training programs, ensuring that research activities and skills feed into ongoing policy and practice.

We are unable to predict when the next pandemic will occur or which new pathogen may appear, emphasising that every country must be well prepared. Australia has many pieces of the plan in place, but we must continue to fill gaps, test and refine existing systems and continually review what works to make sure we are as ready as possible for the next emerging infectious disease challenge. Louis Pasteur once said, “Gentlemen, it is the microbes who will have the last word”. We need to ensure that he was wrong! 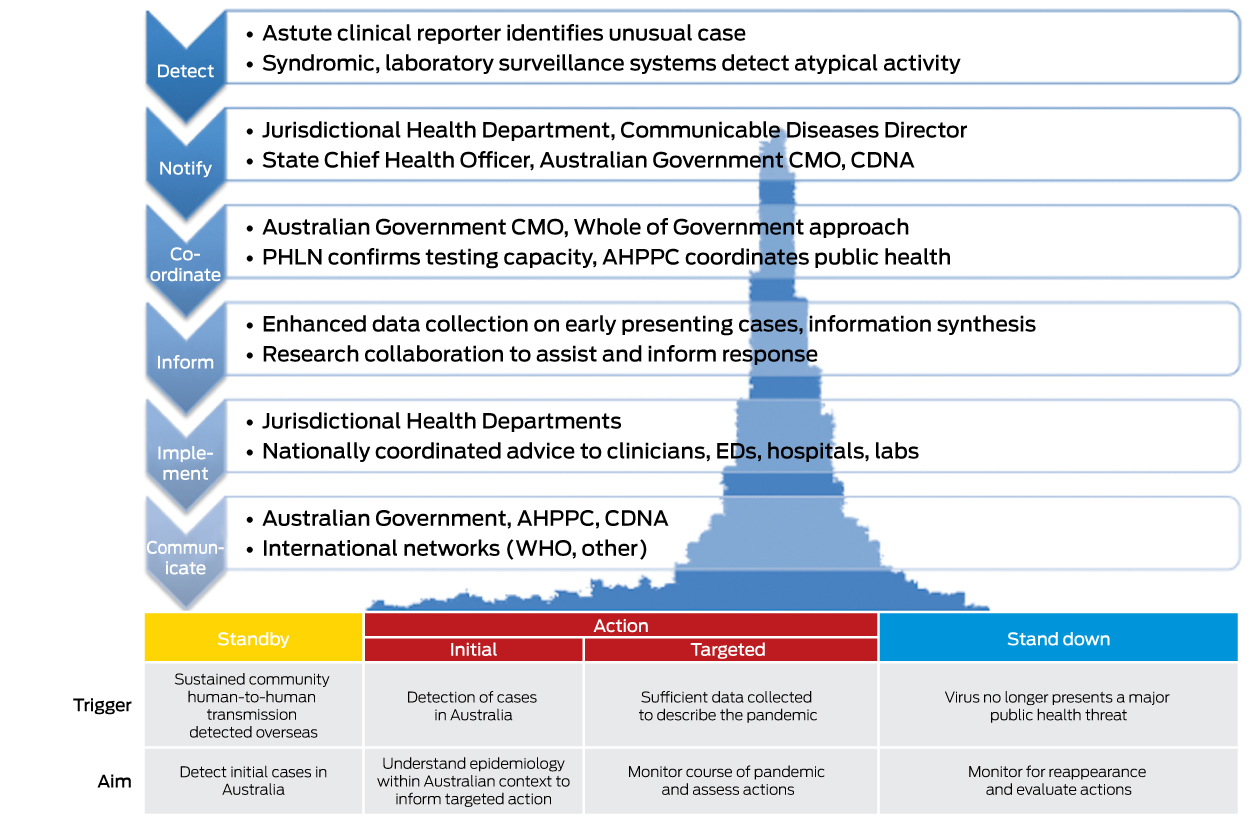 The AHPPC coordinates the national response under the leadership of the CMO, and the PHLN and CDNA provide critical capability to support and inform the response.

We acknowledge Sandra Gebbie’s expert advice on health emergency management in the Australian context throughout the process of manuscript preparation and review, including contributions to the figure demonstrating pandemic response phases.