Objectives: To assess glycaemic control, anthropometry and insulin regimens in a national sample of Australian children and adolescents with type 1 diabetes.

Participants: Children and adolescents (aged 18 years or under) with type 1 diabetes of at least 12 months’ duration for whom data were added to the ADDN registry during 2015.

Conclusions: Most Australian children and adolescents with type 1 diabetes are not meeting the recognised HbA1c target. The prevalence of overweight and obesity is high. There is an urgent need to identify barriers to achieving optimal glycaemic control in this population.

The known International diabetes registries report that many young people with type 1 diabetes do not meet recommended targets for glycaemic control. Relevant Australian data have been lacking.

The new 73% of Australian children and adolescents with type 1 diabetes do not meet the recommended target for glycaemic control. Uptake of intensive insulin therapy varies between diabetes centres. Rates of overweight and obesity were higher than for this age group in the general population.

The implications Strategies for improving glycaemic control in young people with diabetes are urgently needed to prevent the acute and chronic complications of this disorder.

Large population-based diabetes registers in several countries have collated data on glycaemic control, management and clinical outcomes for young people with diabetes, facilitating the international benchmarking of paediatric diabetes centres.1 Analysis of these databases has indicated that glycaemic control in many young people with type 1 diabetes is suboptimal; 54–84% do not achieve the internationally established target haemoglobin A1c (HbA1c) level for young people (below 58 mmol/mol).2,3 This statistic has prompted discussion of the evidence-based management of childhood diabetes and the most effective application of emerging therapies. Several registers have reported improved glycaemic control over time,4,5 and it has been proposed that benchmarking activity, consisting of actively identifying problems and adopting systematic improvement methods (including reporting of results by centre), has contributed to improving patient outcomes.5

In Australia, state-based diabetes incidence registers have operated for more than 20 years; the National Diabetes Register (NDR), which sources data from these registers, was established in 1999.6 However, the NDR reports only the overall incidence and prevalence of insulin-treated diabetes in Australia. While a number of paediatric diabetes centres with established clinical databases have reported clinical outcomes for younger patients over recent decades,7-10 there has been no national surveillance of glycaemic control or the management of diabetes in young people. More recently, a national audit of paediatric diabetes centres described variations in staffing and resources, and reported that clinician-to-patient ratios were below recommended levels, particularly in allied health care and psychological services.11

The Australasian Diabetes Data Network (ADDN) is a prospective longitudinal diabetes register that provides the first opportunity for the long term monitoring of diabetes outcomes of a national sample of Australian patients. The ADDN is an initiative of the Australasian Paediatric Endocrine Group (APEG), the Australian Diabetes Society (ADS), and the Juvenile Diabetes Research Foundation Australia Clinical Research Network. The development of the ADDN has been described in detail elsewhere.12 In this article, we report on glycaemic control, anthropometry, and insulin regimens in a cross-section of Australian children and adolescents with type 1 diabetes.

We analysed data extracted from the ADDN registry for 1 January 2015 – 31 December 2015 for patients who had been diagnosed with type 1 diabetes at least 12 months before their visit to the paediatric diabetes centre, and who were 18 years old or younger at the time of the visit.

Glycaemic control was assessed by measuring HbA1c levels, using either point-of-care or laboratory methods that complied with national accreditation programs for laboratory testing. Body mass index standard deviation scores (BMI-SDS; measures of relative weight adjusted for child age and sex) were calculated from height and weight, using the Centers for Disease Control and Prevention 2000 reference scale for children aged 2–18 years (CDC-2000).13 Children were classified as either normal/underweight, overweight, or obese according to the International Obesity Task Force guidelines.14 Insulin regimens were classified as twice-daily injections (BD), multiple daily injections (MDI; ie, at least three injection times per day), or continuous subcutaneous insulin infusion (CSII). Mean HbA1c levels and BMI-SDS were estimated for each participant over the 12-month study period, with the most recent recorded insulin regimen used for analysis. The descriptive statistics reported are means with standard deviations (SDs) for normally distributed variables and medians with interquartile ranges (IQRs) for skewed data. Statistical analyses were performed in Stata IC 14.0 (StataCorp).

Anthropometric measurements were available for 99% of participants. The mean BMI-SDS was 0.6 (SD, 0.9). Children aged 6 or less had higher BMI-SDS scores than older children and adolescents. The prevalence of being overweight was 25% and of obesity 8%, with the highest proportions in the youngest and the oldest children (Box 1, Box 2).

The insulin regimen was recorded for 98% of participants: CSII was used by 44%, MDI by 38%, and BD by 18%. The pattern of insulin regimen use varied between ADDN centres (Box 1) and age groups (Box 2); BD regimens were more frequent in the youngest age groups, with more than one-third of children under 10 using BD insulin therapy.

The proportion of Australian children and adolescents achieving appropriate glycaemic control is comparable with that reported by a number of overseas registries,1 but lower than that in Sweden and Germany, where 41% and 49% respectively achieved the target.4,5 It is concerning that the national median HbA1c level in 2015 was similar to that reported in NSW in 1999 (8.2% = 66 mmol/mol)17 and that the proportion of young people reaching the recommended glycaemic control target in 2015 was similar to that in Brisbane in 1998 (33%).7 Further, our participants were all treated in specialist tertiary referral diabetes centres; as the ADDN database expands to include children from less specialised centres, the characteristics of the participant group may change. Our results indicate a need to substantially improve outcomes, a common theme worldwide.

Managing diabetes in adolescents is particularly challenging for clinicians. Parental involvement in the self-management of diabetes by adolescents often declines at the same time as the changes associated with the metabolic effects of puberty and growth commence. Only one-quarter of the 1425 adolescents (14–18 years) in our study met the recommended target for glycaemic control. We did not assess people over 18, but evidence is emerging that the deterioration of glycaemic control during adolescence continues into early adulthood, and does not improve to recommended levels before age 30;15 limited Australian data also indicate that targets for glycaemic control are not even closely approached by young adults.18

The ADDN centres included in this report are all publicly funded hospitals in metropolitan areas with comparable patient numbers, so we were not surprised to find similar levels of glycaemic control. We had incomplete data about the ethnic background and socio-economic status of the participants, factors known to influence glycaemic control in other populations; children from minority groups or socio-economically disadvantaged backgrounds in the United Kingdom, for example, were reported to have higher HbA1c levels.19 Ideally, the effect of these and other modifiable factors on levels of glycaemic control should be explored using longitudinal data adjusted for confounders. This is one of the major goals of the ADDN, and our report provides important baseline data.

The mean of 3.1 visits by patients to diabetes centres each year is lower than the 3.7 reported by a national audit in 2010.11 HbA1c is assessed routinely during such visits, and the mean annual number of HbA1c measurements was 3.0 per patient in our sample. In a recent report based on data for more than 79 000 patients with diabetes in the UK, less frequent HbA1c assessment was associated with poorer glycaemic control; the optimal frequency was four times per year.20 The ADDN centres included in this report are tertiary referral centres with multidisciplinary diabetes teams, but we did not examine the types of health professional seen by the patient, nor the overall staff structure of the diabetes teams. Nevertheless, limited access to the full range of allied health professionals recommended for the intensive management of diabetes was reported in 2010,11 and the relationship between staffing levels and glycaemic control should be investigated in future analyses.

To reduce the risk of vascular complications, intensive insulin therapy, including MDI or CSII therapy, is recommended for children, adolescents and adults with type 1 diabetes.3 Clinicians must balance this recommendation against individual patient characteristics and the specific clinical situation. In our study, more than one-third of children under 10 years of age were treated with BD insulin therapy. This may reflect the challenges of managing diabetes in the school setting and the capacity of schools to provide adequate support for intensive insulin therapy.21

The overall uptake of CSII in this sample was 44%; the rate varied little between age groups, but differed between ADDN centres. The consistency of CSII uptake across age groups contrasts with a recent report from three registries including data for 54 410 children and adolescents with type 1 diabetes recruited from clinics in Germany and Austria, the United States and the UK.22 In Germany and Austria, about 70% of children under 6 years of age with type 1 diabetes were treated with CSII, compared with 35–40% of older children. In the US, 30% of children under 6 used CSII, compared with 40–45% of older children, while in the UK 15–20% of children across all age groups used CSII. In a pooled cross-sectional analysis of data from the three registries, the mean HbA1c level was 5.5 mmol/mol lower in children and adolescents treated with CSII than in those using insulin injections. Similarly, an Australian study of children and adolescents with type 1 diabetes found a mean reduction of 6.6 mmol/mol HbA1c associated with CSII.23

In our sample, there was little variation in mean HbA1c levels between centres, despite the differing uptake of CSII. However, patient selection bias is possible when comparing outcomes according to their insulin regimens. For example, adolescents with high HbA1c levels may be moved from more intensive treatment to the simpler BD therapy in an attempt to improve glycaemic control. The relationship between HbA1c level and insulin therapy should be examined by multivariable analysis of longitudinal data, with adjustment for potential confounders. The rates of CSII use in different countries may reflect variations in funding models, clinical practice, and patient demand. In Australia, insulin pumps are available to patients with private health insurance, or through a means-tested pump access program administered by Juvenile Diabetes Research Foundation (JDRF) Australia. It would be valuable to further explore the factors that influence choice of therapeutic regimen for Australian children and adolescents with type 1 diabetes.

Our survey of glycaemic control involved more than 3000 children and adolescents with type 1 diabetes from diverse geographic regions, but we do not know if our data are representative of all Australian children with type 1 diabetes, as the participants were seen in five large tertiary, city-based diabetes centres. Further, ascertainment of data differed between states: most children with type 1 diabetes in WA are managed at one centre, in contrast to other states, where diabetes care is less centralised. As the ADDN enters phase 2, when it will include regional and remote and adult diabetes centres, the representativeness of the available data will improve.

Box 1 – Clinical characteristics of Australian children and adolescents with type 1 diabetes, as registered in the Australasian Diabetes Data Network (ADDN) registry during 2015, by ADDN centre

Box 2 – Clinical characteristics of Australian children and adolescents with type 1 diabetes, as registered in the Australasian Diabetes Data Network registry during 2015, by age group and insulin regimen

Box 3 – Haemoglobin A1c (HbA1c) levels of 3279 Australian children and adolescents with type 1 diabetes, as registered in the Australasian Diabetes Data Network registry during 2015, by age group 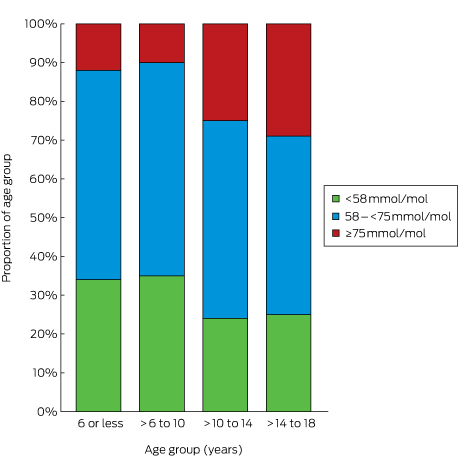