Four international studies have found that the youngest children in a school class are more likely than their classmates to receive pharmacological treatment for attention deficit/hyperactivity disorder (ADHD).1-4 We investigated whether this late birth date effect applies to children in Western Australia. We compared the proportions of WA children born in the early and late months of a recommended school-year intake who received at least one Pharmaceutical Benefits Scheme prescription for an ADHD medication in 2013 (Box).

As the data were de-identified, it was impossible to identify which students had commenced school outside their recommended starting year. However, in contrast to other mainland Australian states, fewer than 2% of children in WA start school outside the recommended school-year intake. Delayed entry is most common for children born in June; our study is therefore likely to underestimate the effect of birth date. Further research in states with greater flexibility for parents in deciding their child’s school starting age would help determine whether a broader age spread in school classes is associated with a reduction or increase in any late birthday effect on ADHD medication status.

Frances, who led the DSM-IV development taskforce of the American Psychiatric Association, argued that similar findings in North America indicated that developmental immaturity is mislabelled as a mental disorder and unnecessarily treated with stimulant medication. While he considers ADHD a legitimate diagnosis, he asserted that it is overdiagnosed and overmedicated, estimating that a “diagnostic rate of around 2% … would best balance harms and benefits”.5

The prescribing rate for children in our study was 1.9%, comparable with that reported by a Taiwanese study (1.6%).4 The late birth date effects identified in WA and Taiwan were of similar strength to those in the three North American studies, where the reported ADHD medication prescribing rates for the periods analysed were at least twice as high (4.5%,1 5.8%,2 3.6%3). This indicates that even at relatively low rates of prescribing there are significant concerns about the validity of ADHD as a diagnosis.

Box – Proportion of children in Western Australia (6–15 years old) receiving at least one Pharmaceutical Benefits Scheme medication (in 2013) for the treatment of ADHD, by month of birth 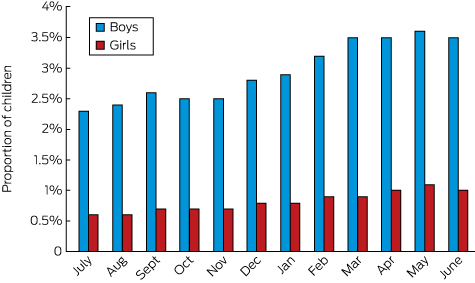 "This indicates that even at relatively low rates of prescribing there are significant concerns about the validity of ADHD as a diagnosis."

Indeed maybe there is a seasonal effect on developing ADHD like there is for multiple sclerosis.

I note that the authors fail to explicitly state their stand on conventional medical treatment of a serious and well accepted condition such as ADHD.

I read with interest the article of Whitely et al, that I consider very interesting, nevertheless the authors forget a study recently published in Spain.