Objectives: To evaluate whether pharmacists completing the medication management plan in the medical discharge summary reduced the rate of medication errors in these summaries.

Setting: The Alfred Hospital, an adult major referral hospital in metropolitan Melbourne, with an annual emergency department attendance of about 60000 patients.

Main outcome measures: The primary outcome variable was a discharge summary including a medication error identified by an independent assessor.

The known Transitions of care, such as discharge from hospital, are points of increased risk for errors in medication management. Medication errors are common in discharge summaries in Australia.

The new Pharmacists completing medication management plans in the discharge summary significantly reduced the rate of medication errors (including errors of high and extreme risk) in discharge summaries for general medical patients.

The implications Pharmacist input into the discharge plan should be more widely adopted. However, for maximum effect, this requires integrating clinical pharmacists into the team structures of all medical units.

Patients admitted to general medical units (GMUs) often have complex histories, including multiple comorbidities, polypharmacy, and being at risk for drug-related problems associated with increased morbidity and mortality.1-3 Transitions of care, such as discharge from hospital, have been identified as points of increased risk for errors in medication management4-6 that may contribute to adverse events and affect continuity of care.7 Suboptimal medication management during or immediately after hospitalisation is a risk factor in 28% of potentially avoidable re-admissions within 30 days of discharge.8

Several Australian studies have identified that medication errors are common in discharge summaries. In a 2010 retrospective analysis of 966 handwritten and 842 electronically generated discharge summaries prepared by an Australian metropolitan hospital, 12.1% of handwritten and 13.3% of electronic summaries contained medication errors. The most common error was omission of a medication, and the highest number of errors involved cardiovascular drugs. Error rates were not affected by whether the discharge summary was written by an intern, resident medical officer or registrar.9

Audit data at our institution indicated that medication errors in the electronic discharge summaries were common. In response, a workforce model was developed that allowed pharmacists to complete the medication management plan for the medical discharge summary, with a full list of the patient’s medications, including any medications commenced during the admission (with indications), withdrawn or changed medications (with explanations), and any known adverse drug reactions. Prior to the implementation of this new model, the clinical pharmacy service to the GMU was already extensive, providing a 7-day, extended hours service, and a pharmacist was involved in all discharges during working hours.

The aim of our study was to evaluate whether pharmacists completing a medication management plan in the electronic discharge summary for patients discharged from an inpatient admission to the GMU was beneficial. At our institution, the electronic discharge summary is completed for all patients at the time of discharge from hospital and electronically transmitted to the patient’s general practitioner. We conducted a cluster randomised, controlled trial to compare error rates in medication management plans completed by pharmacists with those for standard medical discharge summaries, to determine whether involving a pharmacist in preparing the plan might be an effective strategy for reducing medication errors.

This unblinded, cluster randomised, controlled trial was conducted in the GMU at the Alfred Hospital, an adult major referral hospital in metropolitan Melbourne with an annual emergency department attendance of about 60 000 patients. The GMU receives about 4500 admissions each year, predominantly through the emergency department.

We evaluated patients’ discharge summaries written during the period 16 March 2015 – 27 July 2015. Only patients discharged during the pharmacists’ working hours (8 am–5 pm, 7 days a week) were included. Patients were excluded if they were transferred to another hospital or died during the inpatient admission.

The GMU is divided into four geographical subunits with equivalent rostering of clinicians and admitting days. Admitted patients are allocated to teams according to bed availability in the subunits. There were no differences in the number or seniority of staff in the four subunits. Patients in two GMU subunits received discharge summaries with medication management plans completed by a pharmacist (intervention group); patients in the other two subunits received standard medical discharge summaries completed by medical officers of the relevant teams (control group). The subunits were randomly assigned to the intervention or control arms by the primary investigator, using a random number generator.

Secondary outcome measures were the proportions of the types of errors and the proportions of extreme or high risk errors. All errors identified were reviewed and assigned a risk rating by a blinded independent expert panel comprising a general physician, an emergency physician and a senior clinical pharmacist. The panel used a previously validated consequence/probability matrix to review the errors.11 The matrix required the panel to agree on the probability of a scenario occurring and the likelihood that the associated consequence would ensue. Errors were classified on an ordinal severity scale of 1–5 (corresponding to insignificant risk, low risk, moderate risk, high risk, and extreme risk).

For the sample size calculation, it was assumed that the proportion of patients with a standard medical chart including an error was 0.30 (based on previous audits), and we aimed to detect a minimum clinically significant absolute difference of 0.10. With 90% power and α = 0.05 (two-sided), the total sample size required was 824 people, with 412 in each arm and 206 patients in each cluster. The inter-cluster correlation coefficient was expected to be very small (approaching zero) and an adjustment for the design effect was not made. All analyses were conducted in Stata 12.0 (StataCorp).

The study was approved by the Alfred Hospital Research and Ethics Committee (reference, 539/14).

During the study period, 1745 patients were discharged from the GMU. Of these, 832 patients were included in the study (Box 1). No patients were lost to follow-up. Patient demographics and clinical characteristics were similar in the two groups (Box 2). The total number of medications documented in the discharge summaries was 4363 in the intervention arm and 4116 in the control arm.

An example of an identified error is oxycodone being listed as a new medication in the discharge summary for a patient with concomitant anxiety and ethanol misuse admitted to hospital for treatment of thoracic back pain, although opioids were only to be used during their hospital stay. Other examples include medications ceased during the acute hospital admission that were listed in the discharge summary as current medications (eg, warfarin use in the setting of recurrent falls, spironolactone use in the setting of acute kidney injury, telmisartan use in a patient with hypotension).

This model has the ability to reduce iatrogenic morbidity, as pharmacists can focus on medication reconciliation throughout a patient’s hospital stay with greater attention and accuracy than other medical staff members. The release of the patient from hospital is a high risk scenario with regard to clinical handover because, in contrast to situations in which information is transferred between clinicians verbally, information is usually transmitted at discharge in the form of a written summary. The Australian Commission on Safety and Quality in Health Care has developed an electronic discharge summary systems self-evaluation toolkit for health services, and has identified that key problems with discharge summaries include the inaccurate recording of information and the omission of material important for the patient’s safety and wellbeing.13 In a study conducted in Canada, doctors in primary health care settings rated comprehensive medication information as the third most important component of the discharge summary, after discharge and admission diagnosis.14 Electronic linking of patients’ health records may improve the communication between the hospital and community settings in the future, but medication lists automatically generated by a prescribing system would not include many of the necessary components of a medication plan that need to be communicated to the next health care provider. Having the pharmacist complete the medication management plan reduces the risk of medication errors in environments where discharge summaries are typically completed by the most junior doctor in the medical team.

The timing of our study was selected to allow adequate orientation of junior medical staff following the major annual rotation of hospital medical officers in Australia, as the effect of this rotation on patient care has been documented.15 The limitations of our study include the fact that it was conducted at a single site, and at an institution with an integrated and advanced clinical pharmacy service within the GMU. The clinicians identifying errors were not blinded to the study groups, but a blinded multidisciplinary expert panel retrospectively reviewed each error to assign risk ratings. In addition, patients discharged outside pharmacists’ working hours were excluded from the study; however, the clinical pharmacy service in the GMU at our institution is a 7-day service, and less than 5% of patients were discharged outside its operating hours.

The process of pharmacists completing the medication plan in the electronic medical discharge summary has now been implemented as routine care across the majority of clinical units in the Alfred Hospital. The results of our study indicate that pharmacist input into the discharge plan should be more widely adopted. However, to be maximally effective, this requires integrating clinical pharmacists into the team structure of all medical units, and this is not currently standard in all Australian hospitals.

We found that pharmacists completing medication management plans in the electronic medical discharge summary significantly reduced the number of medication errors (including errors of high and extreme risk) in discharge summaries for general medical unit patients. 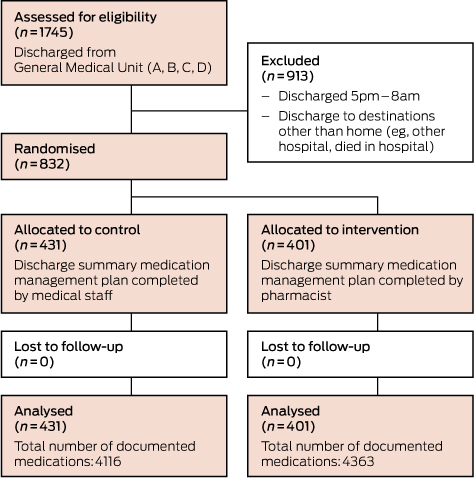 Box 2 – Demographic and clinical characteristics of the study population

We acknowledge the funding for this study provided through the Workforce Innovation Grants Program by the Victorian Department of Health and Human Services. We also acknowledge the pharmacists, medical staff and nursing staff of the general medical unit and emergency short stay unit for their contributions during the study.