Conclusions: Environmental and geographic factors are associated with different patterns of allergic sensitisation in Sydney. Extensive co-sensitisation to subtropical and temperate grasses has implications for immunotherapy in Australia, where most currently available therapies are based on formulations directed at temperate grasses only.

The implications The identified patterns of allergic sensitisation can inform more effective aeroallergen avoidance strategies. The high level of co-sensitisation to temperate and subtropical grasses suggests that existing immunotherapy is suboptimal in the Australian setting. Our selected Australian SPT panel may assist clinicians screening for allergy.

Allergic sensitisation is the first step in the pathogenesis of allergic disease. Socio-economic and geographic factors, including rural environment and climate, affect patterns of allergic sensitisation.1,2 Recognising sensitisation patterns may inform more effective allergen avoidance strategies, and help guide approaches to testing for and treating allergies. In particular, it may influence the choice of immunotherapy, a treatment modality that reduces symptoms and medication use, and which modifies disease in the long term.3

Our study explored airborne allergen (aeroallergen) sensitisation patterns in the Greater Sydney area, and their relationships with climate, proximity to the coast, and environment (urban or rural). As co-sensitisation patterns may be important when making choices about allergy testing and immunotherapy, we also explored patterns of co-sensitisation to temperate and tropical grasses, and to two house dust mite (HDM) species, Dermatophagoides farinae and Dermatophagoides pteronyssinus.

In a retrospective, cross-sectional, multicentre study, we analysed the electronic database records for patients of three Sydney allergy clinics who had undergone aeroallergen skin prick testing (SPT) during the period January 2001 – October 2014. Electronic records were available from January 2001 for one clinic, from January 2009 for the second, and from January 2013 for the third. One author (AWK) reviewed the records and extracted data on sex, date of birth, SPT results, and age and postcode at the time of testing. If patients had undergone multiple SPT, only the most recent results were analysed. Patients were excluded if their postcodes were outside the Greater Sydney area (hereafter: “Sydney”) as defined by the Australian Bureau of Statistics’ (ABS) Australian Statistical Geographic Standard4 (Box 1) or if their most recent SPT test was invalid.

Each patient was assigned to one of three coastal habitation groups according to the distance of their postcode from the coastline (< 15 km, 15–30 km, > 30 km). To assign these groups, a map of ABS postcode areas6 (vector format) was opened in ArcGIS (ESRI), a geographic information system program. Each postcode area was converted to a point on the map determined by its geometric centroid (a single coordinate representing the average of all points in the postcode area). The distance of the centroid of each postcode from the nearest point on the coastline was then determined.

Definition of urban and regional areas

Differences in the proportions of positive SPT results between climate zones, coastal and inland areas, and urban and regional areas were analysed in χ2 tests. Z-tests (with Bonferroni correction) identified significant pairwise differences between specific climate zones or coastal habitation areas. Analysis of data for coastal habitation areas by χ2 tests was adjusted for climate zone to assess the interaction of their effects. Sub-analysis of the 563 patients aged 16 years or less evaluated the influence of changes of address on results; it was assumed that children were less likely to have moved house as often as adults. These analyses were performed in SPSS 22.0.

A total of 1421 patients met the selection criteria. The mean age at testing was 28.3 years (SD, 21.3); 757 patients were female (53.3%). As expected of tertiary allergy services, there was a high proportion of sensitised patients, with 1092 (76.8%; 95% confidence interval [CI], 74.6–79.0%) sensitised to at least one aeroallergen. The distribution of patients between climatic and geographic zones is summarised in Appendix 2.

There were no climate zone differences in the patterns of HDM and animal aeroallergen sensitisation. A temperate/warm summer climate, however, was associated with a higher proportion of patients sensitised to cockroach, mould, weed, tree, and temperate or subtropical grass allergens than were temperate/hot summer and subtropical climates (Box 4).

A sub-analysis of patients aged 16 years or younger found that HDM sensitisation was more common in temperate/hot summer climates (72.9%) than in temperate/warm summer climates (moderately dry winter, 51.8%; no dry season, 59.6%; P < 0.001). There were no significant differences in patterns of sensitisation between climate zones for other allergen groups (data not shown).

There was no relationship between coastal proximity and patterns of HDM and cat sensitisation. Lower proportions of patients residing less than 15 km from the coast were sensitised to cockroach, mould, weed, tree, temperate grass and subtropical grass aeroallergens than those further inland (Box 5, Appendix 3).

All participants living in temperate/moderately dry winter, warm summer zones also lived more than 30 km from the coast, while all in subtropical climate zones lived more than 15 km from the coast. In both temperate/no dry season zones, the pattern of increasing sensitisation further from the coastline remained significant after adjustment for climate zone, with two exceptions: there was no relationship between coastal proximity and sensitisation to cockroach and mould in patients living in temperate/no dry season, warm summer climates (data not shown).

A sub-analysis of tested patients aged 16 years or younger indicated that those residing less than 15 km from the coast were less commonly sensitised to mould, weed, tree and subtropical grass aeroallergens than patients further inland (P < 0.05 for each). Similar patterns were observed for cockroach and temperate grass sensitisation, but were not statistically significant (P = 0.063 and P = 0.055 respectively) (data not shown).

Lower proportions of patients in urban areas were sensitised to cockroach, mould and subtropical grass aeroallergens than in regional areas. There were no differences for other allergen groups (Box 6). Although the differences in a sub-analysis of patients aged 16 years or younger were similar, they were not statistically significant (cockroach, P = 0.153; moulds, P = 0.456; subtropical grasses, P = 0.190) (data not shown).

A panel of ten aeroallergens — D. pteronyssinus, cat, dog, cockroach mix, Alternaria, Aspergillus, plantain, rye grass, timothy grass, and either Bermuda or Bahia grass — may be a useful screening panel in Sydney, having identified 98.5% of atopic patients in our study. This panel, modified by adding or subtracting aeroallergens according to regional variations in the predominance of allergens, may also be useful elsewhere in Australia.

Our results confirmed that sensitisation to Alternaria, grass, weed and tree is less common in residents near the coast.11,22,23 Further, cockroach, Aspergillus and Cladosporium sensitisation is less common in areas less than 15 km from the sea. The climatic conditions of the coast (including increased humidity, thermal stability, and coastal breezes) may offer some protection against these aeroallergens.

Interestingly, regional patients were more frequently sensitised to cockroach than were urban residents. A possible explanation is that our “regional” areas lay on the outskirts of Sydney, and were areas with lower household incomes and socio-economic status,24 both of which are risk factors for sensitisation to cockroach aeroallergens.25,26

The strengths of our study included the fact that it was the first to examine associations between sensitisation to specific allergen groups and climatic and geographic factors in an Australian setting over distances of tens of kilometres. It is also the first to report the prevalence of aeroallergen sensitisation in the Sydney area in a cohort of this size. Further, by separately analysing sensitisation for those under 16 years of age, who were unlikely to have changed addresses as often as older people, the study provides strong evidence of the effect of coastal habitation on reducing sensitisation rates to mould, weed, tree and subtropical grass aeroallergens. Finally, this study is more likely to reflect patterns of clinically relevant sensitisation because it used SPT results to define sensitisation, rather than allergen-specific IgE blood tests; further, it was restricted to patients who had presented to allergy specialists.

Our study, however, has limitations. Firstly, as postcodes and not exact addresses defined places of residence, microclimate and geographic location could not be precisely allocated for each person. Secondly, the proportion of people with allergic sensitisation in our investigation would be higher than in the general population, as we studied patients attending tertiary allergy clinics. Finally, as some patients were tested with different SPT panels, according to clinical indication at presentation, the prevalence of sensitisation we report may be higher than if all patients had undergone SPT for each of the allergens. This limitation was unavoidable, given the retrospective nature of our study. We also note that clinical reactivity requires both allergen sensitisation and subsequent allergen exposure. As such, sensitisation is clinically relevant only when there is also a risk of exposure to the allergen.

In conclusion, our study yields three major insights. Firstly, allergic sensitisation to a variety of different aeroallergens was less common in patients attending allergy clinics who resided less than 15 km from the coast, in temperate/hot summer or subtropical climates, or in urban parts of Sydney. These relationships may affect decisions about allergen reduction and avoidance measures. Secondly, a ten-aeroallergen SPT panel identified more than 98% of atopic patients in Sydney; this panel may assist clinicians when screening for allergy. Finally, currently available immunotherapeutic options, based on northern hemisphere temperate grass allergens, may be inappropriate in the Australian setting in view of the high degree of co-sensitisation to temperate and subtropical grasses; regimens directed at both grass types would be more suitable for treating grass allergy in subtropical regions. 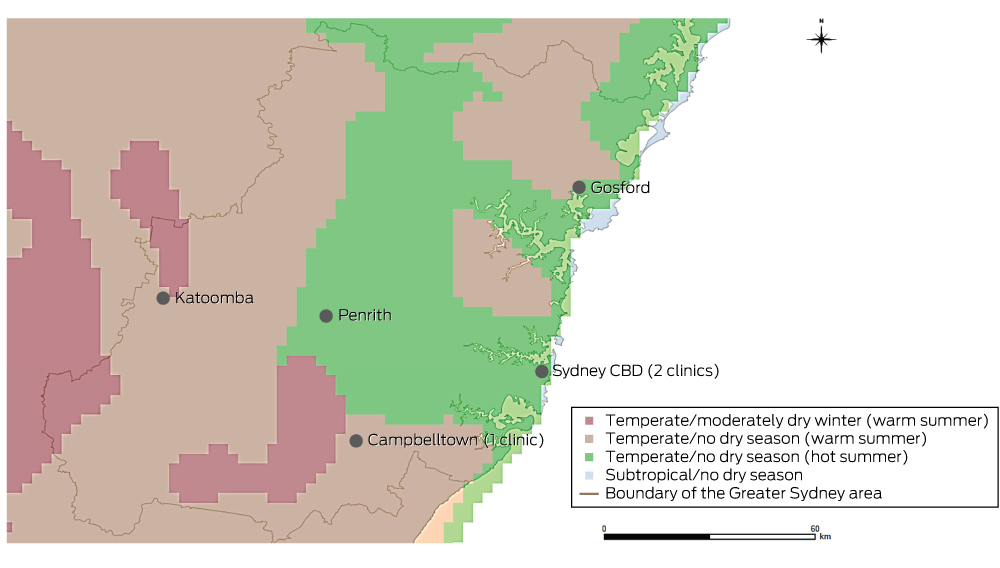 Box 4 – Aeroallergen sensitisation according to climate zone of residence

Box 5 – Aeroallergen sensitisation in according to coastal proximity of residence