“Congenital heart health”: how psychological care can make a difference

Congenital heart disease (CHD) affects more than 2400 Australian babies each year. It is the most common cause of admission to paediatric intensive care in the neonatal period,1 a leading cause of infant death2 and one of the leading causes of disease-related disability in children under 5 years of age.3 In Australia and around the world, the landscape of CHD care is rapidly evolving. With advances in medicine, survival has markedly improved over the past two decades4 and the best estimates suggest that the total population, from newborns through to adults living with CHD, now represents well over 65 000 Australians.5 These gains in survival are a triumph, but paradoxically, they bring new challenges. Earlier diagnosis, more complex treatment choices, longer survivorship and a need for transition from paediatric to adult cardiac services lead us into new territory. Embedded in each of these challenges are a range of psychological complexities, foremost of which is how to best support the wellbeing of people with CHD across a lifetime. “Congenital heart health” requires an integrated, life course approach — with equal emphasis on the physical and the psychological — beginning before birth, through infancy to adulthood. This article presents the evidence for such an approach, highlighting the areas where evidence is lacking and calling for national standards of mental health care in CHD.

Beginning before birth: the mental health of expectant parents

Fetal diagnosis of CHD has changed clinical care. Half of all babies who need heart surgery in the first year of life are now diagnosed while in the womb.6 A major advantage of fetal diagnosis is that potentially unstable newborns can be delivered close to specialised paediatric cardiac services, reducing morbidity and improving survival.7,8 Fetal diagnosis also facilitates early family counselling regarding the nature of the baby’s heart abnormality and expected prognosis. But when a parent hears words such as “your baby has tetralogy of Fallot” their world stops. Fetal diagnosis of any abnormality, major or minor, precipitates an emotional crisis for expectant parents. Threats to the health of the fetus have long been recognised as an important risk factor for psychological disturbance during pregnancy, which in turn indicates a high risk of ongoing psychiatric disorders postpartum. Research has shown that one in three mothers and fathers of infants with complex CHD report symptoms that meet clinical criteria for depression, and about 50% of parents report severe stress reactions consistent with a need for clinical care up to 1 year after their baby’s diagnosis.9 These rates far exceed documented rates of perinatal depression and anxiety in the general community10 and as health care providers, we often markedly underestimate the severity and potential consequences of these symptoms.

There is now overwhelming evidence that depression and anxiety in the perinatal period (from conception to the end of the first postnatal year) can have devastating consequences, not only for the person experiencing it, but also for his or her children and family. Parents with high distress report poorer physical health,11 greater parenting burden,12 higher health service use13 and more suicidal ideation14 compared with parents of sick children with lower distress. At least 14 independent prospective studies have demonstrated a link between maternal antenatal stress and child neurocognitive, behavioural and emotional outcomes.15 Acknowledging these findings is not to blame parents — not in any way, not at all. But to not talk about this, to not address the significant emotional toll of CHD, is to not provide optimal care.

Diagnosis of a life-threatening illness during a child’s formative years can have far-reaching effects that ripple through the family and across a lifetime. Infants with complex CHD experience a range of uncommon and painful events, such as separation from their mother at birth, urgent transfer to specialised intensive care, frequent invasive medical procedures, feeding difficulties and withdrawal from narcotic pain relief. These early life experiences can have profound consequences for the developing child, shaping brain development, the body’s immune system and responses to stress. Studies of individuals exposed to high levels of stress early in life consistently show that the experience of early adversity is associated with disrupted child–parent attachment and with alterations in the developmental trajectories of networks in the brain associated with emotion and cognition.16

From a neurodevelopmental perspective, children with CHD experience greater difficulties compared with their healthy peers. The risk and severity of neurodevelopmental impairment increases with greater CHD complexity, the presence of a genetic disorder or syndrome, and greater psychological stress. During infancy, the most pronounced difficulties occur in motor functioning. By early childhood, studies show that children with complex CHD have an increased risk of neurodevelopmental impairment, characterised by difficulties in fine and gross motor skills, speech and language, attention, executive functioning, emotion regulation and behaviour.17 Emotionally, 15–25% of parents report significant internalising (eg, anxiety, depression, somatisation) or externalising (eg, aggression) difficulties in their child.18 Few studies have used validated clinical assessments, but those studies that have included a clinical assessment report psychiatric illness in more than 20% of adolescents and young adults with CHD. There is also a diagnostic rate of attention deficit and hyperactivity disorder up to four times higher than in the general population.18

Navigating the transitions of adolescence

Young people must not only navigate the typical transitions of adolescence and early adulthood, they also face the challenges that come with developing a sense of identity and autonomy in the context of CHD while, at the same time, breaking the bonds formed with their paediatric team and transitioning to adult cardiovascular care. Clinicians lose their “clinical hold” on so many patients during this process, with an alarmingly high proportion of adults with CHD (24–61%) not receiving the recommended cardiac care.5,19,20 This can have catastrophic health consequences,5 yet our understanding of the factors that influence transition is wanting. In 2013, the Cardiac Society of Australia and New Zealand published a statement outlining best practices in managing the transition from paediatric to adult CHD care.21 This statement recognises the role that psychological factors play in shaping young people’s capacity to manage their heart health care, in addition to clinical, familial and practical factors.

Living with CHD into adulthood

Our understanding of the psychology of adult CHD lags decades behind our knowledge of children’s experiences. While neurodevelopmental clinics have been established at several paediatric cardiac centres across Australia, little attention is paid to neurocognitive health in adult CHD care. Without effective intervention, hardships encountered during infancy and childhood can persist for years after diagnosis and treatment. It is also possible for difficulties to emerge for the first time in adulthood, with heart failure, atrial fibrillation, cardiac surgery and recurrent strokes increasing vulnerability to neurocognitive impairment in adults with CHD. A meta-analysis of 22 survey-based studies of emotional functioning in adolescents and adults with CHD found no differences from the norm;22 however, studies using clinical interviews have found that one in three adults with CHD report symptoms of anxiety or depression warranting intervention.23 The vast majority of these adults go untreated.

In 2010, we established an integrated clinical psychology service dedicated to CHD. Located across the Sydney Children’s Hospitals Network, we provide a statewide mental health service for children and young people with all forms of heart disease and their families (Box). Evidence-based, psychologically informed care and a variety of interventions can prevent or relieve psychological morbidity.24 National (beyondblue, 2011) and international (International Marcé Society, 2013) authorities now recognise and endorse psychosocial assessment for depression and anxiety in the perinatal period as part of routine clinical care. Integrating psychosocial assessment within existing health services has been shown to improve treatment uptake, as well as mental health and parenting outcomes, up to at least 18 months postpartum.24 Indeed, integrating psychosocial assessment within a clinical setting with which families are already engaged is a key factor distinguishing successful and unsuccessful early mental health interventions. Providing tailored skills-based training and support to staff also has the potential to overcome a range of patient (eg, stigma, cost), provider (eg, limited awareness, low confidence), and health system (eg, cost, under-prioritisation) factors that can prevent access to care. Moreover, there are costs to not offering mental health care. In neonatal intensive care, for example, targeted interventions significantly reduce maternal depression and anxiety, increase positive parent–infant interactions, and reduce health service costs by reducing the length of stay at the neonatal intensive care unit and total hospital admission.25

A call for national standards of mental health care in CHD

While there may be deep sadness associated with many aspects of CHD, there may also be deep hope and, for many, good health. Early intervention can make a profound difference for families and influence a lifetime of outcomes for a child. To transition CHD to “congenital heart health”, equal emphasis must be placed on both physical and mental health so that the successes in physical care are not undermined by the absence of adequate emotional care. Across the CHD continuum, there are still huge gaps in access to mental health services. To start to address these gaps, we call for the formation of a multidisciplinary working group to develop national standards of mental health care in CHD. We also advocate strongly for more Australian research across the discovery-to-translation pipeline such that, from early life in the womb through to adulthood, we can better understand — and prevent or assuage — the difficulties that our patients and their families experience. 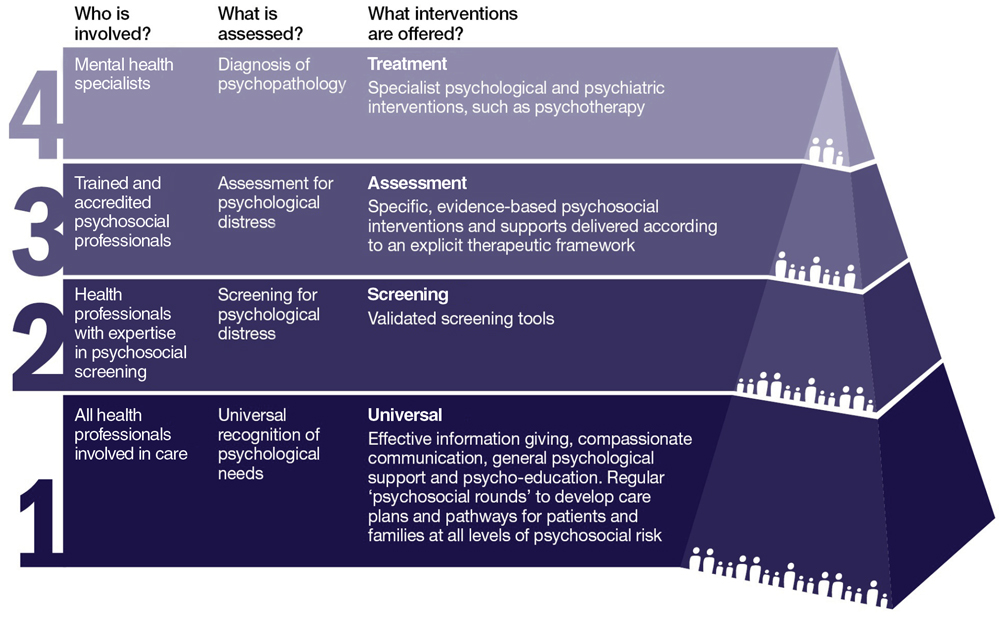 Nadine Kasparian is the recipient of a National Health and Medical Research Council (NHMRC) Career Development Fellowship (APP1049238). The translational work described in this article is also supported by an NHMRC Project Grant (APP1081001).

I welcome this terrific and long overdue recognition of the mental health needs that accompany CHD. In my work with adults with congenital heart difficulties, I have been struck by the sense of aloneness that many feel. I think that our efforts to assert that we cannot have heart health without mental health will help reduce the shame and stigma that many experience.