Objective: To describe the epidemiology and rates of all health care-associated bloodstream infections (HA-BSIs) and of specific HA-BSI subsets in public hospitals in Queensland.

Conclusions: The rate of HA-BSIs in Queensland public hospitals is lower than reported by similar studies elsewhere. About one-third of HA-BSIs are attributable to intravascular catheters, predominantly central venous lines, but the vast majority of CLABSIs are contracted outside ICUs. Different sources of HA-BSIs require different prevention strategies.

Health care-associated bloodstream infections (HA-BSIs) are a major threat to patient safety and impose substantial burdens on health care systems. It has been estimated that for every 100 hospital admissions there are two nosocomial BSIs.1 Crude mortality rates for patients with hospital-acquired BSIs were as high as 30% in the late 1990s,2,3 and were still about 15% in recent years.4 Survivors of BSIs can experience long term reductions in health.2 HA-BSIs are associated with extended lengths of hospital stay: an extra 10 days for central line-associated BSIs (CLABSIs)5 and 12 days for Staphylococcus aureus BSIs.4

In Australia, all hospitals are required to report S. aureus BSI rates to the National Health Performance Authority (NHPA),6 and intensive care units (ICUs) can voluntarily participate in the national CLABSI surveillance program of the Australian and New Zealand Intensive Care Society.7 The Australian Commission on Safety and Quality in Health Care has led national initiatives for preventing and controlling health care-associated infections, through new accreditation standards and initiatives in areas such as hand hygiene and antimicrobial stewardship.8

Published surveillance data have recorded reductions in certain subsets of BSIs in hospitals. For instance, the National Healthcare Safety Network (NHSN) in the United States found that CLABSI rates in ICUs had decreased from 3.64 to 1.65 per 1000 central line-days between 2001 and 2009.9 Mandatory surveillance data from England showed that methicillin-resistant S. aureus (MRSA) BSI rates dropped from 4.3 to 1.2 per 100 000 bed-days between 2008–09 and 2012–13.10 A more complete and contemporary understanding of the epidemiology of all BSIs acquired in hospital settings is needed to direct future hospital-based prevention activities.

In this article we report on the epidemiology and rates of all HA-BSIs and of specific subsets acquired in Queensland public hospitals, based on active surveillance data.

The Centre for Healthcare Related Infection Surveillance and Prevention (CHRISP) initiated a standardised, computerised surveillance system for health care-associated infections in Queensland in 2001.11,12 Twenty-three medium to large public hospitals (85% of public hospital activity in Queensland) contributed HA-BSI surveillance data. Some of the data collected from 2001 to 2007 have already been reported.11 In this article we report our analysis of HA-BSI data for 2008–2012.

CHRISP BSI surveillance definitions, adapted from those of the Centers for Disease Control and Prevention (CDC)/NHSN,13 have been used by all participating hospitals since 2001. In contrast to surveillance by the NHSN and in some Australian states, all episodes of BSI in adults (≥ 14 years old) in Queensland were subject to prospective surveillance by infection control practitioners.

A positive blood culture was labelled a BSI if it met the NHSN laboratory-confirmed bloodstream infection (LCBI) definitions (criteria 1, 2 or 3).13 However, positive blood cultures related to an infection at another body site were also included, although these would be excluded by NHSN LCBI definitions. During the period about which we are reporting, older NHSN definitions14 were used for criteria 2 and 3 episodes (ie, a single positive culture for a common commensal organism was labelled a BSI if treatment had been initiated). Episodes within 14 days of the first episode involving the same organism were excluded.

Episodes were classified as HA-BSIs if:

The focus of HA-BSIs was classified as one of the following:

Rates were only calculated for inpatient HA-BSIs, expressed as the number of BSI cases per 10 000 patient-days (overnight admissions), with 95% confidence intervals calculated for Poisson distributed counts. The overall HA-BSI inpatient rate was calculated, as were specific subset rates: inpatient IVC HA-BSIs, inpatient S. aureus HA-BSIs, and inpatient MRSA HA-BSIs. Non-inpatient HA-BSI rates were not calculated because of the lack of a suitable denominator. Pearson χ2 and Fisher exact tests were used to compare the differences in proportions between two groups, adjusted for multiple testing. Hospitals were categorised into peer groups using NHPA classifications.6 Data were analysed in Stata 12.1 (StataCorp).

Of these HA-BSI episodes, 79% were inpatient health care-associated (Box 1); the majority (63%) were in patients in general medical, surgical, haematology, oncology and intensive care units (Box 2). Twenty-one percent of HA-BSI episodes were non-inpatient health care-associated BSIs, of which 77% were attributed to outpatient chemotherapy or same day admissions for haemodialysis (Box 2). The proportion of non-inpatient BSI episodes remained stable over time (data not shown).

For HA-BSIs associated with IVCs, gram-positive bacteria accounted for 56% of pathogens, gram-negative bacteria for 33%, and fungi for 8%. The corresponding figures for HA-BSIs with an organ focus were 37%, 56%, and 5% respectively.

Our study provides important information on the epidemiology of all HA-BSIs, and is one of the few to be based on such complete data for multiple hospitals.16-19 Most HA-BSIs (79%) were associated with overnight inpatient stays in general medicine, general surgery, haematology, or oncology departments or in ICUs. However, a significant minority (21%) were acquired in outpatient or same day care settings, predominantly in haematology, oncology and haemodialysis units. About one-third of HA-BSIs were IVC-BSIs, mostly associated with central venous lines, but only 5% of CLABSIs were attributable to ICUs. S. aureus was responsible for 18% of HA-BSIs.

Our inpatient S. aureus BSI rate (1 per 10 000 patient-days) is comparable with data from England (0.9 per 10 000 bed-days)20 and with recently reported data from Victoria.21 In another Australian study of hospital-onset S. aureus BSIs (analogous to our inpatient health care-associated),22 there was a more marked decline in the S. aureus BSI rate over time, but the study started from a higher baseline at an earlier time point, and the hospitals assessed may have had a different casemix to ours. The decline in the contribution of MRSA to S. aureus BSIs mirrors what has been described elsewhere,21,22 possibly reflecting concurrent prevention strategies in hospitals (eg, improved catheter insertion and maintenance, hand hygiene programs, antimicrobial stewardship initiatives).21 During the financial year 2012–13, 1724 health care-associated S. aureus BSI cases were reported from Australian public hospitals.23 As S. aureus represented 18% of all HA-BSIs in our dataset, we estimate that about 10 000 HA-BSIs occur in Australian public hospitals each year.

One of the strengths of our surveillance system is the prospective inclusion of non-inpatient HA-BSI episodes that might otherwise have been discounted as present on admission or classified as community-onset infections. Non-inpatient episodes caused about 20% of HA-BSIs and one-quarter of all health care-associated S. aureus BSIs (consistent with other Australian data21); almost half were associated with IVCs. Non-inpatient episodes have the potential to play a more significant role as increasingly complex care is delivered in ambulatory settings.24 This suggests that non-inpatient episodes are worthy of surveillance and are a significant source of preventable HA-BSIs. Suitable denominators need to be determined; the majority of our episodes would be captured if divided into haemodialysis-associated events per same day admissions to haemodialysis, and neutropenic sepsis events per outpatient occasions of chemotherapy.

CLABSI rates are widely used performance metrics for assessing hospital care quality and patient safety. For example, hospitals in the US are required to submit CLABSI data to the NHSN, and financial reimbursement is linked to hospital-specific CLABSI rates.25 Eighty-one per cent of IVC-BSIs, or 28% of all HA-BSIs, were CLABSIs, but only 5% were contracted in ICUs. This emphasises the need to expand efforts to prevent CLABSIs outside the ICU. Further, for each IVC-BSI acquired in hospital there were two other HA-BSIs: this also has significant implications for prevention interventions.

The surveillance strategy in Queensland has had the benefit of classifying neutropenic sepsis separately from IVC-BSIs for more than a decade, but our definition is somewhat broader than the more recent NHSN mucosal barrier injury laboratory-confirmed bloodstream infection (MBI-LCBI) definition; based on the isolated organisms alone, about half of the episodes in our dataset classified as neutropenic sepsis would not meet the NHSN MBI-LCBI definition.15

Our surveillance data have some limitations. Firstly, although 23 medium to large hospitals (85% of public hospital activity in Queensland) participated in surveillance, our findings might not be applicable to the many small public hospitals in Queensland (more than 100). However, participating hospitals provided care for the most complex patients and those at greatest risk of health care-associated infections. Secondly, although local surveillance definitions were provided by Queensland Health to infection control practitioners, there was potential for variation between infection control practitioners and between hospitals in the application of these definitions. Thirdly, reports of coagulase-negative staphylococci were probably over-represented during the reporting period, as our surveillance used the older NHSN LCBI criterion 2 definition,14 which accepted a single positive culture for a common commensal organism as a BSI if treatment had been initiated.

Our data provide a broad overview of HA-BSIs, including the total burden, the relative contribution of CLABSIs, ICU CLABSIs and S. aureus BSIs in both the inpatient and ambulatory hospital care settings. It also illustrates the range of risks associated with HA-BSIs, each of which requires different prevention strategies. For instance, insertion bundles have proven benefits in preventing IVC-BSIs in the ICU setting. However, most of our CLABSIs occurred outside ICUs, where the benefit of insertion bundles is less certain; maintenance bundles may be more important in this setting. Peripherally inserted venous catheters also need attention, and, although attention to antisepsis is likely to be a key factor, the utility of insertion bundles in this regard is unknown. In contrast, prevention of secondary HA-BSIs associated with surgical site infections, implanted devices or procedures is probably best served by attending to modifiable factors, including appropriate antibiotic prophylaxis (when indicated) and antisepsis. Organ site focus infections not associated with surgery or procedures are less likely to be preventable, as are those associated with chemotherapy-induced neutropenia. 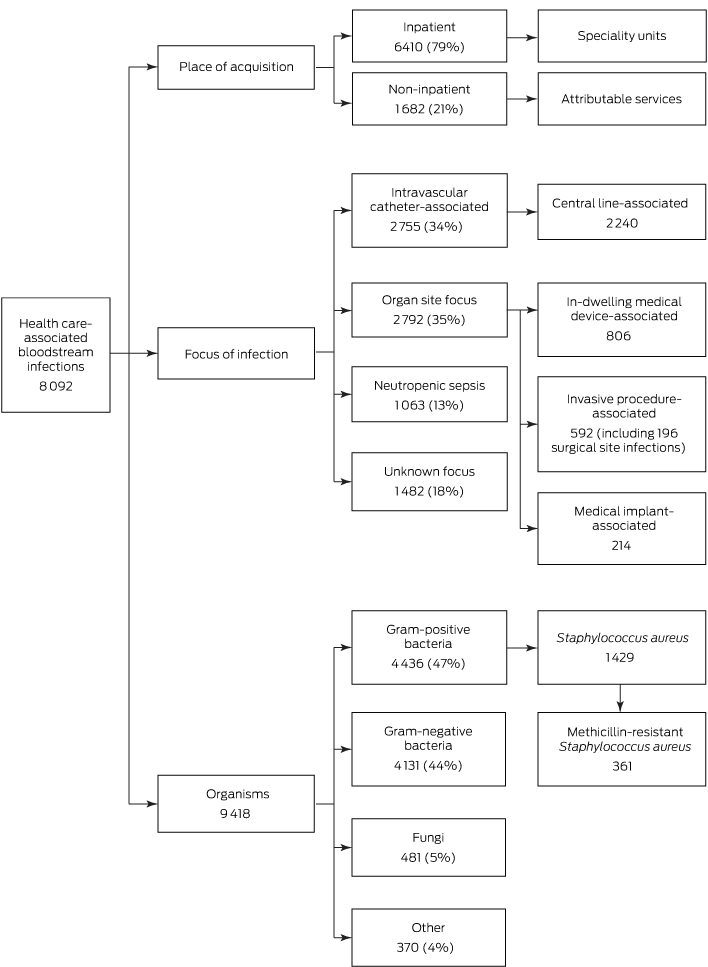 Box 3 – Organisms isolated in health care-associated bloodstream infections (HA-BSIs) of patients with and without neutropenia in 23 Queensland public hospitals, 2008–2012

We thank all infection control practitioners and teams from the participating hospitals who played a critical role in surveillance data collection, monitoring, feedback of results, and implementation of infection prevention and control programs. This work is supported by Queensland Health.