In 2017, Australia is moving to a new state-of-the-art, evidence-based cervical screening program using primary human papillomavirus (HPV) DNA testing for all women, whether they have received HPV vaccination or not. Commencing HPV screening at 25 years of age is only possible in the context of a decrease in high-risk HPV prevalence in young women. This is because in an unvaccinated population of young women, infection with HPV (particularly the most oncogenic types, HPV 16 and 18) is common and would result in over-referral of women who test positive for HPV 16 or 18 to colposcopy for infections never destined to persist or cause disease. Since the implementation of the quadrivalent HPV vaccination program in Australia between 2007 and 2009, when over half of all women aged 12–26 years were fully vaccinated, the prevalence of HPV 16 and 18 in young women has declined dramatically.1,2

Using Victorian Cervical Cytology Registry data, including those from 2014, we present for the first time evidence that strongly suggests that the impact of the vaccination program on histologically confirmed cervical pre-cancerous lesions now extends to women aged 25–29 years (a 17% decline in the past 2 years from 18.8/1000 to 15.6/1000 [χ2 = 18.6; P < 0.0001]) (Box). We also note the first sign of a decline in the underlying rising rates of high-grade lesions in 30–34-year-olds as vaccinated cohorts reach this age range. Women in these age groups were aged 18–26 years at vaccination; therefore, although many were sexually active before vaccination, the benefits of vaccination are now measurable, as incident HPV 16 and 18 infections that would otherwise have been acquired in the years since vaccination, and their consequent high-grade lesions, are prevented.3 Initial declines (from 2009) occurred in the youngest women (< 20 years), with increases in prevalence observed in older women through the vaccination period. These increases appear to be a continuation of the underlying trend over the past decade of increasing rates of abnormality, exacerbated by the increased screening of higher-risk women (under-screened and never-screened) documented around the time of the vaccination program relating to prominent media messaging and campaigns regarding HPV and cervical screening.4 HPV vaccine cannot treat pre-existing infection or disease. It is possible that the illness and eventual death in 2009 of the young reality television star, Jade Goody, from cervical cancer in the United Kingdom also influenced screening behaviour, as seen in contemporaneous UK screening program data that noted similar increases in disease detection.5

These new findings of continuing and extending declines in the prevalence of cervical disease are in line with modelling studies underpinning the new screening program6 and indicate that the promise of HPV vaccines is coming to fruition in disease prevention. In combination with the new cervical screening program, Australian women will have protection against cervical cancer that is highly effective and evidence based. 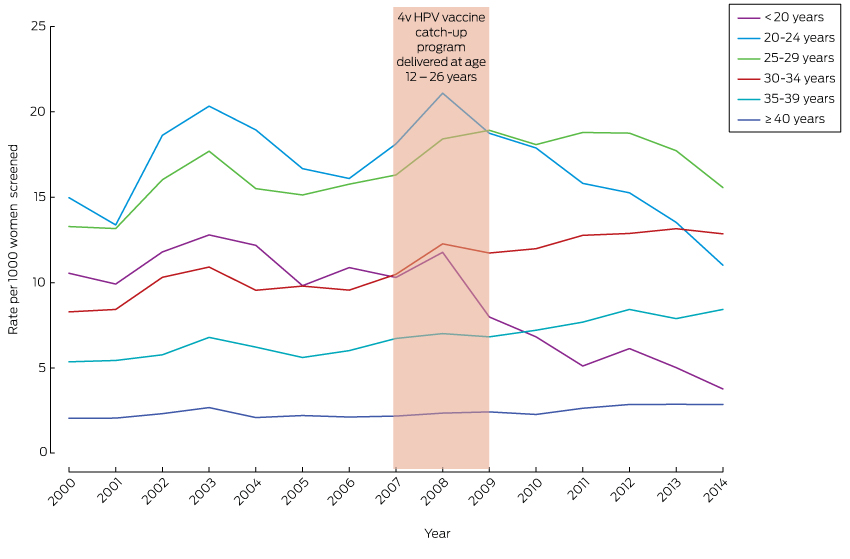