Using mobile phones to acquire images in clinical practice enables rapid, collaborative decision making1 and is increasingly common. However, the practice is not completely foolproof, as a recent “near miss” at our institution demonstrates.

A 45-year-old woman presented with spontaneous subarachnoid haemorrhage secondary to a ruptured anterior communicating artery aneurysm. The anterior communicating artery aneurysm and an unruptured left middle cerebral artery aneurysm were clipped via craniotomy and a ventricular drain was inserted. Serial post-operative computed tomography (CT) brain scans showed an evolving infarction in the left middle cerebral artery territory, presumed to be secondary to temporary clipping at surgery, which became fully established after 28 hours. All cerebral vessels were patent, visualised on a post-operative CT angiogram. Elevated intracranial pressure (> 40 mmHg) and neurological fluctuation prompted a repeat CT scan, a photograph of which was taken from a computer screen using a mobile phone (Box, A). This image was sent by the intensive care unit consultant to the mobile phone of the on-call neurosurgeon, who noted apparent extensive bifrontal infarction. The patient was urgently transported to the operating room for decompressive craniectomy; however, on reviewing the scans at a radiology workstation before surgery (Box, B), the neurosurgeon noted the discrepancy and the procedure was cancelled. The patient recovered well and was neurologically intact and independent 6 months after discharge.

Although others report success using mobile phones to photograph CT brain scans displayed on computer monitors,2 our case highlights the need for doctors to appreciate the limitations of display technology. For example, many computer monitors exhibit viewing angle-dependent reductions in luminance and contrast ratio,3 which render images susceptible to artefact, particularly when viewed at close range.4 Moreover, mobile phone screens do not meet the technical requirements of a medical imaging display device.5

Guidelines on mobile device photography in the health care setting address privacy concerns but not technical aspects.1 Therefore, we offer some suggestions on preventing similar cases from occurring:

We hope this case serves to remind doctors of the need for caution when reviewing photographs of digital images, and that our suggestions will be helpful in preventing similar situations from occurring. 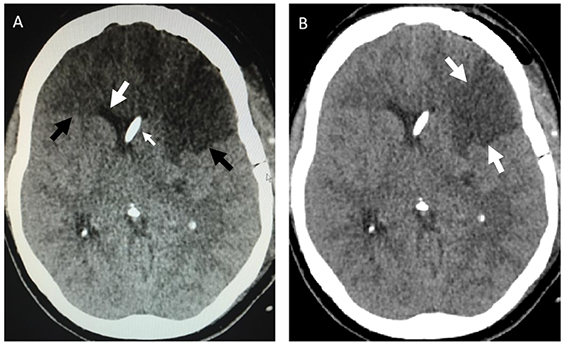 A: Photograph of axial CT image sent via a mobile phone, showing apparent hypodense frontal lobes suggestive of infarction (black arrows). Note however the anterior horns of the lateral ventricles are not distorted or effaced, as would be expected with such an extensive infarct (large white arrow). A ventricular catheter is located in the right lateral ventricle (small white arrow). B: The original axial CT image showing only a wedge-shaped, left middle cerebral artery infarct (white arrows).

This article is highly topical, given the very common use of mobile phone photography in hospitals at present.

In the situation described, the referring doctor could have sent a high-quality screenshot of the CT image to the surgeon through internal email, which the surgeon could have accessed remotely and securely, avoiding issues of both image quality and legality/privacy.

I would be interested to know whether the change in luminance due to the viewing angle of the photographer was the sole factor causing the difference between the original CT image and the photograph. Could other factors, such as ambient lighting and automatic image processing by the mobile phone, have played a role in causing the problem?

In public hospital vascular surgery practice, it is common for junior doctors to send photographs of wounds (often diabetic foot ulcers or previously debrided wounds) to senior colleagues, who are often busy in theatre, for appraisal. Inconsistences in lighting and white balance have been identified as caveats of clinical photography with mobile phones.[1] One study showed that among surgeons assessing mobile phone photographs of wounds, the presence of tissue necrosis was misdiagnosed in 21% of cases.[2] It is borne out by personal experience that such photographs often give a false clinical impression, and decisions on discharge from hospital, and the need for surgical debridement, based on these photographs are likely to be wrong.

While the potential benefits of mobile phone photography as part of telemedicine for isolated remote patients are obvious, its use in the contexts discussed here, within metropolitan hospitals, needs much better understanding and should be regarded with caution.