Objective: To describe the incidence and causes of hospitalisation for severe traumatic brain injury (TBI) in Victoria over a 9-year period.

Design, setting and participants: A retrospective review of data from the population-based Victorian State Trauma Registry for hospitalised cases of severe TBI, 2006–2014.

Main outcome measures: Temporal trends in the incidence of severe TBI and in causes of injury.

Conclusions: The decline in the incidence of motor vehicle-related severe TBI suggests that road injury prevention measures have been effective. Additional targeted measures for reducing the incidence of major head injuries from falls should be explored.

Traumatic brain injury (TBI) is the most significant cause of death and severe disability resulting from major trauma.1 The economic burden of TBI is significant, with estimated annual hospital costs of $184 million in Australia.2 Although severe TBI constitutes a small proportion of all TBI,3 these injuries are a significant public health problem, associated with high mortality, profound long term disability, and significant long term health care costs.4,5

While there is evidence that mortality associated with severe TBI has not changed since 1990,6 data on temporal trends in the incidence and causes of severe TBI are limited. Understanding the epidemiological patterns of severe TBI is necessary for developing targeted interventions and evaluating injury prevention strategies. This is particularly important given the worldwide focus on the prevention of falls and road trauma, the major causes of severe TBI.5,7,8

The aim of this study was therefore to examine trends in the incidence and causes of hospitalisations for severe TBI across a statewide population (Victoria) over a 9-year period (2006–2014).

A retrospective review of severe TBI cases was conducted, using data from the Victorian State Trauma Registry (VSTR) for the period 1 January 2006 – 31 December 2014.

The VSTR is a population-based registry that collects data about all patients hospitalised in Victoria with major trauma.9 A case is included in the VSTR if any of the following criteria are met:

Severe TBI was defined as trauma with an AIS (2005 version, 2008 update) score for the head region of at least 3 and a Glasgow Coma Scale11 (GCS) score of 3 to 8. A head region AIS score of 3 or more indicates an anatomical injury with a rating of serious or higher; a GCS score in the range 3 to 8 is often used as the criterion for severe brain injury.5,7 The combination of anatomical and physiological measures to define severe TBI avoided including patients whose low levels of consciousness were not caused by a head injury, but by alcohol or drug intoxication, for example. Injury diagnoses coded before the introduction of the AIS 2008 were mapped from the AIS 1990, 1998 version to the AIS 2008 using a validated map.12 When possible, the GCS score was recorded on arrival at the hospital to which the patient was initially transported (this occurred for 716 patients, or 35% of all cases analysed in our study). If this was unavailable, the pre-hospital GCS score recorded by paramedics (1080 patients, 52%) was used, or the GCS score recorded on arrival at the definitive hospital (the hospital at the highest service level in the tiered trauma system structure at which the patient was treated: six patients, 0.3%). The GCS score was coded as 3 when pre-hospital, primary hospital and definitive hospital GCS scores were all unavailable because the patient had been intubated (260 patients, 13%). Pre-hospital deaths and events experienced by patients outside Victoria subsequently transported to Victorian hospitals were excluded from analysis.

Severe TBI cases were stratified by intent of the event causing the injury (those resulting from unintentional or intentional events), as the strategies for preventing TBI are different for these two categories. Unintentional events were classified as transport-related (involving motor vehicles, motorcycles, pedestrians or cyclists), falls (low falls from standing or no more than one metre, or unintentional high falls from a height of greater than one metre), or other. Intentional severe TBI cases were classified as interpersonal violence or self-harm events. Patient age was categorised into five bands (0–4, 5–14, 15–34, 35–64 and ≥ 65 years). Event locations were mapped to Victorian Government Department of Health regions13 and classified as metropolitan or rural.

Population-based incidence rates and 95% confidence intervals (95% CIs) were calculated for each calendar year. Population estimates for Victoria for each year were obtained from the Australian Bureau of Statistics.14 Comparisons of crude and age–sex-standardised incidence rates (standardised according to the five age categories) found substantial concordance (overall severe TBI incidence: Lin concordance correlation coefficient ρ = 0.999 [95% CI, 0.999–1.000; P < 0.001]). Crude incidence rates are therefore reported. Poisson regression was used to determine whether the incidence rate increased or decreased over the 9-year period. A check for potential overdispersion of the data was performed to ensure that the assumptions of a Poisson distribution were met. The incidence rate ratio (IRR) and 95% CIs were calculated, and P < 0.05 was deemed statistically significant. Stata 13 (StataCorp) was used for all analyses.

This study is the first to specifically focus on the incidence of severe TBI in Australia across all age groups. The rates reported by the few studies that have examined the incidence of severe TBI have varied (cases per 100 000 population per year: Norway, 4.1;7 Switzerland, 10.6;15 Canada, 11.4;5 France, 17.38). The overall incidence of severe TBI found by our study (4.20 cases per 100 000 population per year) was similar to that in the Norwegian study, which investigated patients hospitalised with severe TBI during 2009–2010, but was lower than in most other studies. This is at least partly explained by differences in the inclusion criteria applied; most studies used head AIS8,15 scores alone to define severe TBI, whereas our study and the Norwegian investigation employed a combination of head injury classification (AIS scores or International Classification of Diseases, revision 10 codes) and GCS score. There may also be genuine differences between countries in the incidence of severe TBI resulting from differing exposures to high risk activities. We found a decline in the incidence of severe TBI over the 9-year period. This contrasts with earlier studies that included all degrees of TBI severity,5,16 which found no significant changes in incidence. However, these studies were conducted over shorter time periods5 or only at two time points,16 potentially explaining the lack of detectable trends.

Falls and transport-related events were the most common causes of severe TBI, and this is consistent with Australian17 and international data.5,7,8,16 It is notable that the incidence of severe TBI resulting from motor vehicle crashes declined over the study period. This reduction is possibly explained by continued improvements in vehicle safety, as well as road safety mass media campaigns. Active safety design measures, such as electronic stability control (ESC) and autonomous emergency braking substantially reduce crash risk;18 ESC has been a mandatory safety feature in new vehicles sold in Victoria since 2011. Similarly, passive safety features, such as curtain airbags, substantially reduce head injuries in side impact crashes.19

There was also a decline in the incidence of severe TBI in motorcyclists, but this was not statistically significant. A review of motorcycle fatalities in Australia indicated that risky riding behaviour (excessive speed, the influence of alcohol and drugs, disobeying traffic control laws) was involved in 70% of events.20 Interventions targeting these behaviours, including mass media campaigns and increased law enforcement, may further reduce severe TBI rates. Consideration should also be given to active safety features in motorcycles, such as antilock braking systems.

Falls were the second most common cause of severe TBI in our study. The incidence of severe TBI from low falls, which occurred mainly in those aged 65 years or more, increased between 2006 and 2014. Increases in this group have also been observed in New South Wales21 and internationally.5 This may be a result of ageing populations, increased rates of comorbidities, and more widespread use of anticoagulant and antiplatelet drugs.16,21 These medications are effective in preventing stroke and thrombo-embolism,22 but increase the complexity of managing trauma patients; further studies examining the incidence of trauma-related complications are needed. The proportion of the Australian population aged 65 years or more is expected to double between 2005 and 2050,23 and our results and international data3 show that TBI outcomes are noticeably worse in older than in younger people. It is therefore clear that further research is required to reduce the incidence of severe TBI in older people. While an overall increase in the incidence of severe TBI resulting from falls was observed across the entire study period, a decline was observed for 2011–2014. This suggests that recent fall prevention programs may have been effective, although further data are needed to explain this trend.

The major strength of our study was the use of the population-based VSTR to provide a comprehensive overview of the incidence of severe TBI. However, a number of limitations are acknowledged. Our study was observational, so that identifying causal explanations for the reported trends is beyond its scope; we can only postulate that certain factors may explain these trends. The denominator used to calculate crude incidence was the population of Victoria during the relevant year; we do not have data on the number of people undertaking specific activities (such as cyclists or pedestrians) or the actual time they were at risk of injury. Using the catchment population as the denominator, however, is a widely employed approach.5,7,8,16 Pre-hospital deaths were excluded from this study, so that the true incidence of severe TBI may have been underestimated. Additionally, our analysis was under-powered for assessing combined age- and event-specific trends over time. Further research is needed to understand the mortality and functional outcomes for patients with severe TBI.

Given the devastating consequences of severe TBI, efforts in both primary and secondary prevention are critical to reducing mortality and non-fatal injury burden. In this study of patients hospitalised with major trauma between 2006 and 2014, the incidence of severe TBI resulting from motor vehicle crashes declined, while severe TBI resulting from falls increased over time. Ongoing efforts to reduce road trauma, interpersonal violence and intentional self-harm injury are warranted, while increased efforts to reduce falls-related injuries and injuries to vulnerable road users are needed. 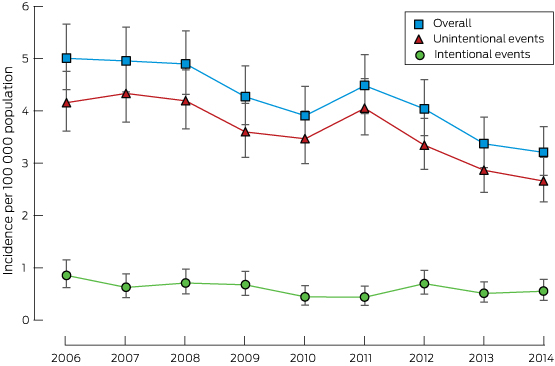 Box 3 – Profile of patients with severe traumatic brain injury in Victoria, 2006–2014, by age group and cause of injury* 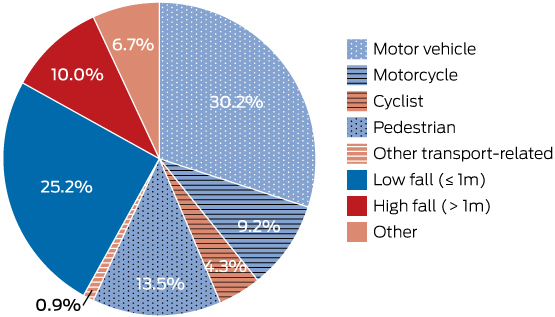 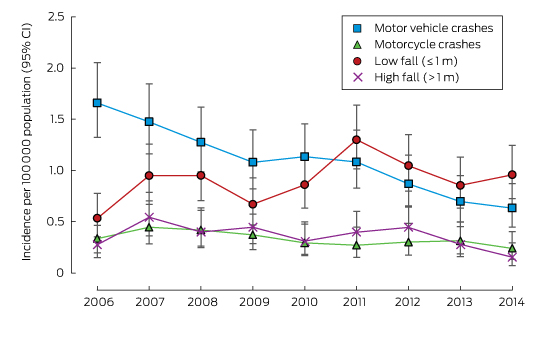 The Victorian State Trauma Registry (VSTR) is funded by the Victorian Department of Health and Human Services and the Transport Accident Commission. We thank the Victorian State Trauma Outcome Registry and Monitoring (VSTORM) group for providing VSTR data. We also thank Sue McLellan for her assistance with analysing the data. Ben Beck and Janet Bray received salary support from the National Health and Medical Research Council (NHRMC) Australian Resuscitation Outcomes Consortium (Aus-ROC) Centre of Research Excellence (#1029983). Janet Bray was also supported by a co-funded NHMRC–National Heart Foundation Fellowship (#1069985/100136). Peter Cameron and Belinda Gabbe were respectively supported by a Practitioner Fellowship (#545926) and a Career Development Fellowship (GNT1048731) from the NHMRC.