A gender imbalance has been noted at medical conferences internationally, with typically more male than female speakers.1-3

We audited official ASM programs and included all sessions with allocated speaking times. We compared distributed data using the Mann–Whitney U test and categorical variables using a χ2 test. A two-sided P < 0.05 was taken to indicate statistical significance.

Our results indicate that the gender imbalance among college ASM speakers largely reflects gender representation in the specialty workforce.

The longer median speaking time for male speakers may reflect the greater proportion of men at senior levels in the specialty workforce. As ASM programs did not always distinguish between invited speakers and those selected from abstract submissions, we could not compare these selection pathways. A limitation of the workforce comparison is that each specialty workforce includes practitioners who do not undertake research and are unlikely to speak at conferences; conversely, ASM speakers are not exclusively drawn from the specialty workforce. 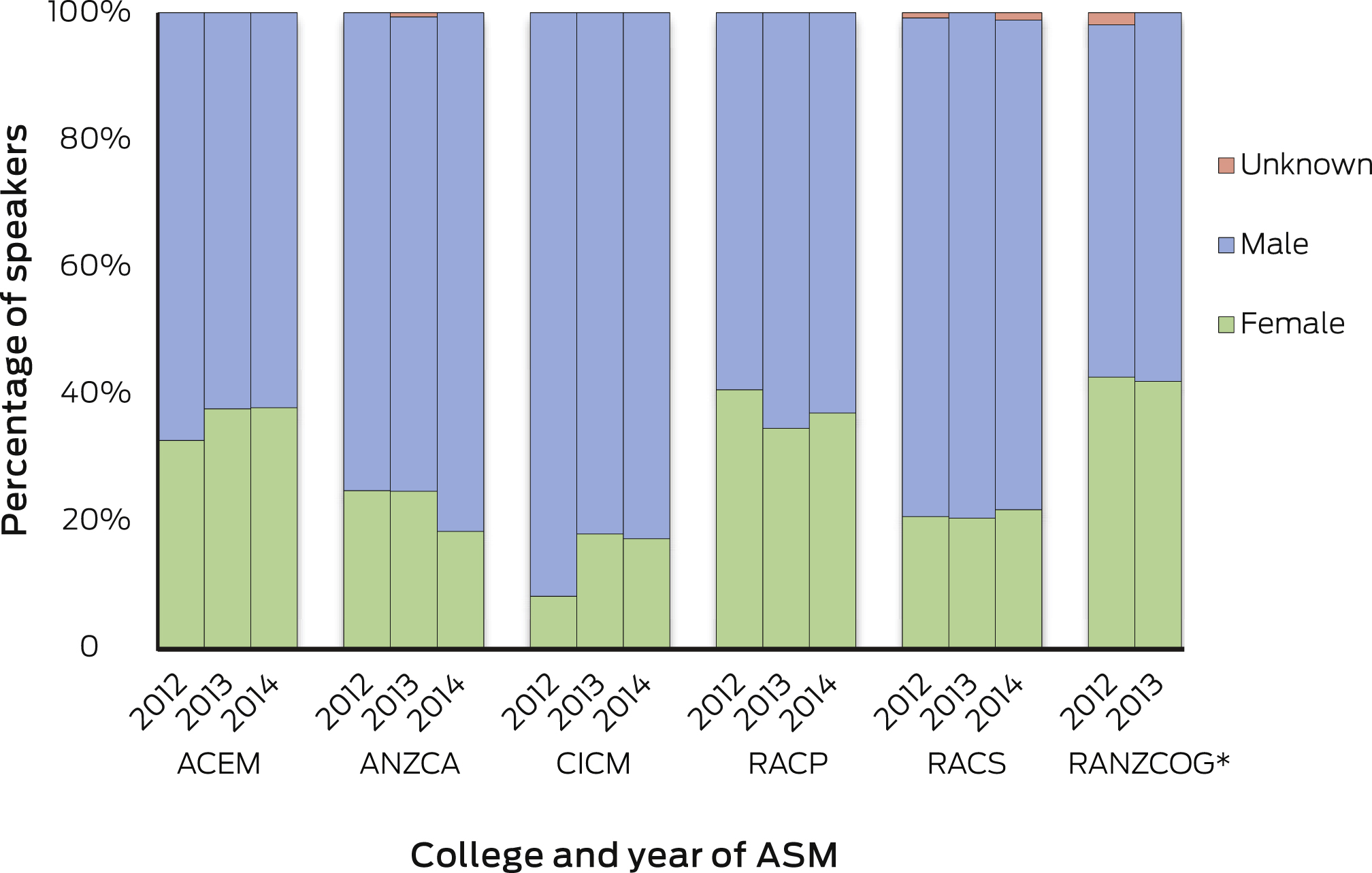 Lucy Modra, Danielle Austin and Sarah Yong are all members of the Women in Intensive Care Medicine Network.

Astonishing conclusions, bordering on political correctness.
Having been on the organising committee for about 50 conferences, the subject of gender of the speaker never entered discussion, as criteria are generally related to the conference themes, practice issues, relevant research,or international trends,
Do the authors think that we should had a balance of Gay presenters, over/under 40 years old, part timers, non English speaking background, AMC qualified grads,
What has gender got to do with the quality of an academic meeting?

Thank you for your interest in our article Brian.

There is a large body of literature documenting the measurable bias against women in selection processes, even when applicants are assessed on apparently objective criteria (see for example Jena et al ‘Sex Differences in Academic Rank in US Medical Schools in 2014’ JAMA 2015: 314: 1149-58; Wennerås and Wold ‘Nepotism and Sexism in Peer Review Nature 1997:387: 341-343). This unconscious gender bias is likely to be amplified in informal selection processes such as invitations to speak at conferences.

Interestingly, there is some evidence that groups claiming to select based on merit alone are more likely to be biased in their decision making than those making no appeal to merit (Castilla and Benard, ‘The Paradox of Meritocracy in Organizations’ Admin Science Quarterly 2010:55:543-76). The fact gender was not discussed by conference conveners does not demonstrate that gender was not a factor in speaker selection.

Increasing the diversity of conference speakers- including gender, sexual orientation and ethnic background- can generate novel research ideas and lead to a conference more responsive to the needs of the diverse patient population served.

Convening a specialty conference is a mammoth task, with multiple competing considerations such as conference theme and presenting local and international research. We believe that gender is one important consideration in this process.

The editor:
I congratulate Dr Modra, et al, on having the courage to publically address this issue. I am also impressed that they have taken a scientific approach, rather than an emotive, unquantifiable and anecdotal approach, which would probably have been the easier option.

Thus, I would be interested in the amount of women who were on the organising committees of the "about 50 conferences" that Dr Walpole has sat on. This is almost 3 times the number of conferences that Dr Modra, et al, evaluated.

Is the gender imbalance on these organising committees a contributing factor to the number of women speakers at ASMs? Or perhaps there are other factors at play, maybe directly related to the committee members' personal beliefs?

I have only sat on 4 conference organising committees myself so I am certainly in no position to provide comment.

However, with "about 50" conferences under his belt, it appears Dr Walpole is in a very strong position to provide expert evidence on this.

I look forward to his expert opinion, obviously supported by evidence.