Not just a cosmetic problem: facial papules in Birt-Hogg-Dubé syndrome

A 52-year-old man was referred for laser therapy of facial papules for cosmetic reasons. The patient presented with a history of multiple asymptomatic facial lesions that had slowly erupted over a 10-year period. Before this consultation, the patient had been referred to a dermatologist to exclude skin cancer and biopsy of a lesion showed an angiofibroma and no evidence of malignancy. Personal history was remarkable for recurrent bilateral spontaneous pneumothoraces requiring pleurodesis. His family history was positive for recurrent pneumothorax in an adult son and recent onset of similar facial lesions in another son. There was no personal or family history of renal carcinoma.

Physical examination revealed multiple dome-shaped firm whitish papules over the forehead and cheeks (Figure 1 and Figure 2). The clinical presentation of multiple facial fibrous papules occurring on a background of unexplained pneumothoraces was suggestive of the genetic condition, Birt-Hogg-Dubé syndrome (BHD). Repeat punch biopsy of a lesion revealed an infundibulum with perifollicular fibrosis suggestive of a trichodiscoma, supportive of BHD.

The patient was referred to a cancer genetic clinic for counselling, genetic testing and screening. Renal ultrasound revealed a left renal hypoechoic lesion measuring 2.5 × 2.1 × 2.4 cm. The patient underwent robotic left partial nephrectomy, and pathology revealed a hybrid oncocytic/chromophobe tumour. Although this tumour was growing in a benign manner, it displayed low-grade renal cell carcinoma features. However, as the tumour was completely excised, no further treatment was required.

BHD is a rare, autosomal dominant, hereditary cancer syndrome due to germline mutations in the folliculin gene (FLCN). The incidence of BHD is about one in 200 000 of the population; however, it is likely underdiagnosed because of low clinical awareness.1,2 Folliculin is a protein expressed on keratinocytes in the basal and spinous layer of the epidermis, dermal fibroblasts, nerve cells, lymphocytes, macrophages and mast cells. Extracutaneously, folliculin is expressed on pulmonary type-1 alveolar epithelial cells and distal nephrons.3 Folliculin is a tumour suppressor protein, important in cell signalling pathways that regulate cell growth. It is proposed that genetic mutation results in loss of a functional protein in cells, resulting in unchecked tumour growth.4 The pattern of folliculin expression correlates with the clinical features of BHD, including skin papules of varying pathologies, basal lung cysts, spontaneous pneumothorax and renal cell carcinomas.

Proposed diagnostic criteria for BHD include the presence of one major or two minor features.2 Major features are at least five adult onset fibrofollliculomas or trichodiscomas, with histological confirmation, or a pathogenic FLCN mutation. Fibrofolliculomas and trichodiscomas present as multiple small flesh-coloured or white dome-shaped papules on the face, neck and upper trunk. Angiofibromas have also been associated with BHD; however, the presence of multiple angiofibromas is more suggestive of tuberous sclerosis.5 Minor features include a history of bilateral basal lung cysts, with or without spontaneous pneumothorax, early onset (age < 50 years) renal carcinoma with multifocal or bilateral carcinomas or a mixed chromophobe/oncocytic histology, and a first-degree relative with BHD.6

Patients with BHD have a 50-fold increased risk of primary spontaneous pneumothorax development and more than 80% of affected individuals have multiple pulmonary cysts visible on a computed tomography scan, with the less common basal rather than apical predilection.6,7 Renal cell carcinomas occur in 27% of affected individuals. A wide range of renal carcinomas have been reported, with the most common pathology being the unusual mixed oncocytic/chromophobe tumour. More than 65% of patients with BHD and renal carcinoma present with multifocal, bilateral or recurrent tumours.

Early recognition of BHD is crucial, given the high risk of renal neoplasm development which, if detected early, is curable. Thus the general practitioner and dermatologist are uniquely placed to consider the diagnosis of BHD when consulted by a patient requesting removal of multiple facial papules. Unexplained spontaneous pneumothorax and basal lung cysts should also raise suspicion of BHD. Referral for genetic testing and multidisciplinary care is essential. Routine renal radiographic screening is recommended for affected individuals > 40 years and, given the likelihood of multiple tumours, nephron-sparing surgery is preferred.8

Treatment of skin lesions associated with BHD is elective. In particular, laser ablation of individual lesions may improve the appearance for cosmetic reasons. 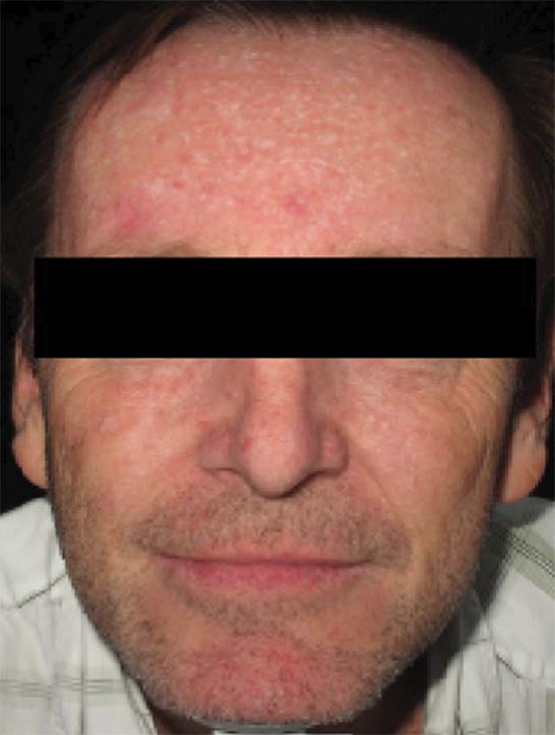 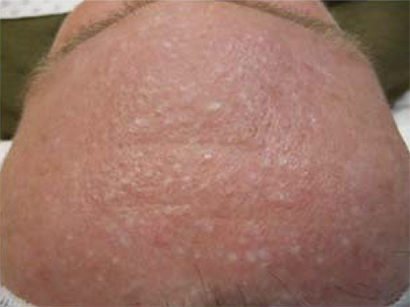 It was good to see Birt Hogg Dube syndrome highlighted in the recent issue of the MJA by the publication of this interesting case report. In addition to its dermatological manifestations, clinicians should be aware of this syndrome as a cause of spontaneous pneumothorax and of multiple pulmonary cysts (1). The most frequent presenting feature of BHD is pneumothorax, which occurs 50 times more commonly in this disease than in the normal individual, and is often recurrent. Skin manifestations are variable and tend to become more prominent with age, so the absence of these should not exclude such a diagnosis in any patient presenting with pneumothorax. Pleurodesis is often required and patients need access to modern techniques for video-assisted thoracoscopic surgery. Thus, the practical difficulties experienced by patients with BHD frequently involve the lungs. The risks of renal cancer are high and making such a diagnosis is therefore important; in addition to renal imaging, screening for lung cysts using high resolution CT scanning is also valuable. Some reports suggest an additional raised risk of colorectal cancer, but this is yet to be confirmed (2). Once a genetic diagnosis has been confirmed, or if lung cysts are detected, it is also advisable to refer patients to a specialist respiratory service where expert advice in this area is available. BHD is one of several genetic diseases which may cause cystic lung disease, renal and skin lesions (including tuberous sclerosis complex and lymphangioleiomyomatosis). Multidisciplinary treatment in a specialist clinic may provide the best option for treatment and allow access to new treatment options in this rapidly developing field (3).
Deborah H Yates
Director, Multiple Cystic Lung/LAM Clinic, St Vincent's Hospital, Sydney 2010.
References:

Thank you for your very informative response. As noted in our case, we agree that spontaneous pneumothorax and multiple pulmonary cysts alone should raise suspicion of Birt-Hogg-Dubé syndrome. We also agree that patients with Birt-Hogg-Dubé should be managed in a multidisciplinary specialist clinic. Due to the word restrictions we were unable to expand on Dr Yate’s very important points.