Geographic inequity in healthy food environment and type 2 diabetes: can we please turn off the tap?

The human, financial and wider societal costs of type 2 diabetes mellitus (T2DM) in Australia are high,1 but not inevitable.2 Studies indicate that lifestyle interventions involving weight reduction can reduce T2DM risk.3 Prevention and better management of T2DM can also help to prevent cardiovascular complications.4 So, to paraphrase the title of a recent editorial in the Journal, if we know what to do, what is the problem?5

One problem is that the complexity of sustaining the prevention effort has not been captured well by randomised trials,6,7 which veer towards individual-level (sometimes referred to as “high-risk”) strategies rather than evaluations of structural interventions at the population level.8 General practitioners have a very valuable role to play, but placing the burden of prevention squarely on them will not work.9 The determinants of T2DM risk are intergenerational, relational, multifaceted and inequitably distributed.10 Legions of scientists have engaged with the idea that where we live and work, and where our children grow up and attend school, all have some influence on our life chances — for better and for worse.11 Pollution, green space, sidewalks, vandalism and so on — these “social determinants” accumulate, support, insult, provide resilience, wear us down and conspire in no small way to shape the manifestation of geographic inequities in health that our best efforts appear unable to budge. In fact, there is increasing appreciation that some health interventions actually widen health inequities.12

We recently highlighted the spatial disparity in T2DM risk in the metropolitan area of Sydney, Australia: lower risk in the eastern suburbs and north shore, and much higher risk in the west, particularly around Blacktown and Mount Druitt.13 For members of the health workforce in those communities, this was no revelation. Addressing this inequity has been a core motivation in the development of the Western Sydney Diabetes Prevention and Management Initiative — a consortium led by the Western Sydney Local Health District and the Western Sydney Primary Health Network (formerly the Western Sydney Medicare Local), involving the University of Western Sydney and other local universities, councils, non-governmental organisations and other locally operating institutions. This initiative recognises that, for the most part, people who receive support from the health sector remain exposed to the same quantum of determinants that contributed to their health condition. The health sector has little control over features of our neighbourhoods that we think may have a powerful downstream impact on health across our lives. To use a well-trodden metaphor, the health sector is bailing water from the sink but cannot reach the tap.

What are these spatially manifesting risk factors that promote T2DM and potentially hinder its effective management? Food environment, or perhaps inequity of healthy food environment (eg, ample access to fresh produce) more specifically, is a prime candidate because what we eat is fundamental to our health. Accordingly, the Mapping food Environments in Australian Localities (MEAL) Project was initiated in 2014 to explore geographic inequities in food environment in metropolitan Sydney. Also, members of our MEAL Project team have subsequently joined forces with the Australian Prevention Partnership Centre Liveability Project team to engage in related epidemiological studies across the country.14 Here, we report preliminary findings from the MEAL Project.

Gathering geocoded data from the Yellow Pages (circa 2012), we used a geographic information system to calculate the number of greengrocers, supermarkets, takeaway shops and alcohol outlets within a 1.6 km road network distance from a person’s home. We chose a 1.6 km catchment to reflect a walking distance of about 15–20 minutes, although we acknowledge that there will be some variation in how far people are prepared to walk to purchase food. Australian Bureau of Statistics residential Mesh Blocks, released for the 2011 census and containing between 30 and 60 dwellings each, were used as a proxy for home. We report results comparing selected areas of Sydney’s west (3148 Mesh Blocks) and north shore (2744 Mesh Blocks), where T2DM prevalence was just below 7% and a little above 2%, respectively, according to the National Diabetes Services Scheme Australian Diabetes Map (2013).

The maps in the Box tell a story that is in part surprising, yet also no surprise at all. The first map shows that in these selected areas of western Sydney and the north shore, most neighbourhoods did have access to at least one greengrocer or supermarket. Those neighbourhoods in blue (379 [6%]), however, did not have a greengrocer or supermarket within 1.6 km. It was more common in the west than in the north (261 [8%] v 118 [4%]) for residents to most likely rely on public or private transport to obtain fresh produce.

Overall, there is by no means a dearth of alcohol or takeaway options if one lives in the affluent north shore. But there are multiple venues for purchasing fresh produce within a reasonable walking distance from home should a person choose to do so. Importantly, much the same can be said in many neighbourhoods in the west of Sydney, even although that area is comparatively less well off. But for many other communities in the west, the availability of fresh produce within a reasonable walking distance is limited. Meanwhile, the provision of takeaway shops and alcohol outlets outnumbers greengrocers and supermarkets in many neighbourhoods in the west. In some of those communities, there is a takeaway shop but no greengrocer or supermarket.

These results are preliminary and subject to limitations, not least in the possible undercount of takeaway shops because many of them are local independent retailers with no need to advertise in the Yellow Pages. But if the real number of takeaway shops is substantially higher, that only serves to deepen our concern. Analysis of smaller catchments (eg, a 400 m road network distance from a person’s home) may also reveal sharper inequities in these indicators. This research is currently underway, and we are also comparing food consumption patterns and health in relation to local food environment.

Nonetheless, there is an important question of what evidence is necessary to fuel effective policies and practices, because large-scale investments in structural change may not guarantee the desired impacts. In the United States and the United Kingdom, studies of takeaway shop bans and introduction of supermarkets to communities that did not previously have one, for example, have revealed little behavioural change in the short term.15-17 On the other hand, life course theory indicates that engrained behaviour is unlikely to change drastically at the flick of a policy switch; we have to invest in multisectoral change for which the health benefits may only be realised in the long term.10

Meanwhile, potentially unintended short-term consequences should also be taken into account, because takeaway shops and alcohol outlets are also places of work for many people. Removing them may not only result in the loss of livelihoods and potential social networks but could also increase car dependency if more attractive, healthier and affordable substitutes are not provided within a reasonable walking distance from home. Rather than just addressing the problem as if it were somehow in a vacuum or laboratory, we also need to be wary of the possibility of shifting these potentially “obesogenic” circumstances from one location to another. To enhance the business case for the multisectoral approach for prevention, we need to have greater confidence in what works locally. This means that the health impact of structural change in the built environment, such as the ongoing developments in western Sydney, needs to be evaluated with as much rigor as possible. To this end, investment in local evidence and in academia–industry partnerships is fundamental so that those evaluations are well developed and resourced from the get-go. The aforementioned studies and other wisdom from overseas, although relevant and to be taken into consideration, are no substitutes for well-crafted experimental and observational studies conducted in our patch.

To conclude, we re-emphasise that geographic inequities demonstrably manifest within cities and the related issues of T2DM and food environment are ones that we ought to pay close attention to in the health sector. In Australia’s largest city, there is a clear spatial mismatch, in which many communities — where access to a car is not guaranteed and public transport options can be thin, where social and economic pressures weigh heavy, and where diet-related health challenges are considerable — have few opportunities to purchase fresh produce close to home. We know not whether land-use zoning, better public transport or other structural changes will provide the upstream silver bullet for preventing the myriad chronic diseases that challenge us collectively as a society. But policies that ensure opportunities to purchase fresh produce that is affordable and available within a reasonable walking distance from home in communities where this is not presently the case would be fairer. We would not build neighbourhoods without roads, clean water and sanitation, so why do we build neighbourhoods without other things that are essential, such as good access to fresh produce? Investment in gathering local evidence driven by multisector initiatives (such as the Western Sydney Diabetes Prevention and Management Initiative) has to be part of the solution. What seems clear is that more of the same and a failure to take action on the status quo are unlikely to stem the flow of bad news for our fellow human beings who are living with and fighting T2DM. It is time we all work together to turn off that tap.

Indicators of food environment within a 1.6 km road network distance of residential Mesh Blocks in selected areas of western Sydney and the north shore 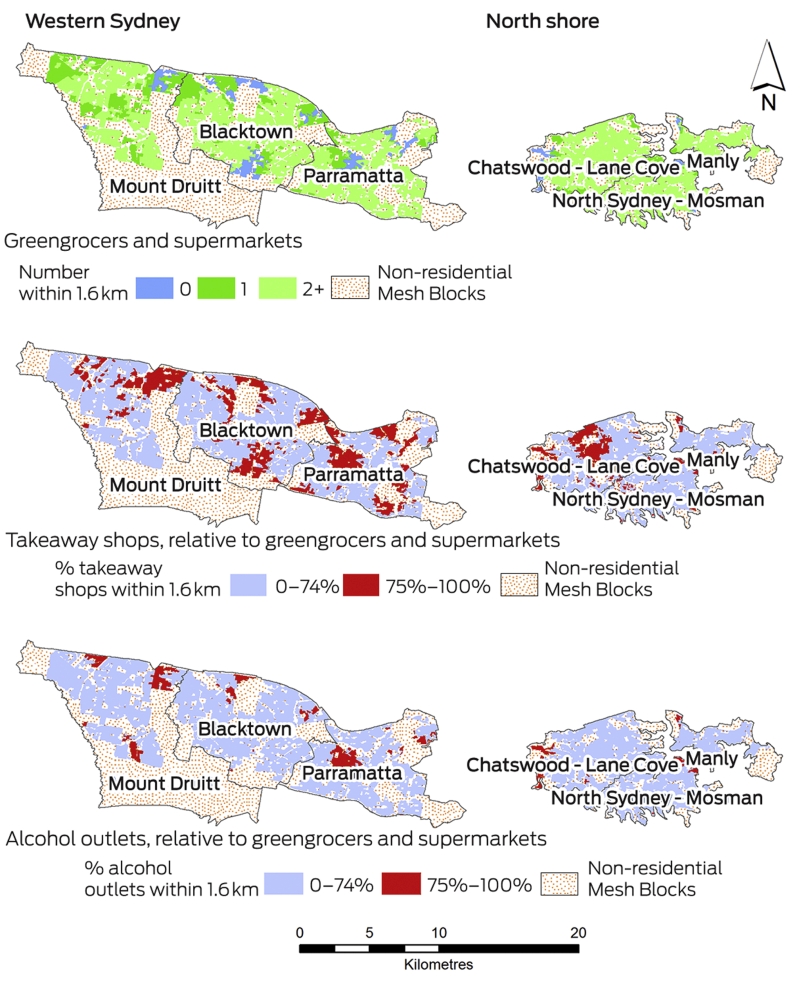 We are funded by a grant from WentWest, the former Western Sydney Medicare Local and now Western Sydney Primary Health Network. Thomas Astell-Burt is also funded by a National Heart Foundation of Australia Postdoctoral Fellowship (No. 100161). Food environment data presented in this article were sourced from Sensis.