Summary statement: new guidelines for the management of paracetamol poisoning in Australia and New Zealand

A large proportion of accidental paediatric exposures and deliberate self-poisoning incidents involve paracetamol; it is the leading pharmaceutical agent responsible for calls to Poisons Information Centres in Australia and New Zealand. Management of paracetamol poisoning has altered since the previous guidelines were published in 2008, so that they do not reflect current practice by clinical toxicologists. The key changes from the previous guidelines concern the indications for administration of activated charcoal; the management of patients taking large or massive overdoses; modified-release and supratherapeutic ingestions; and paediatric liquid paracetamol ingestion.

Each initially involves a risk assessment (Box 1). The key factors to consider in paracetamol poisoning are the ingested dose and serum paracetamol concentration (early), or clinical and laboratory features suggesting liver damage (late). Serum paracetamol concentration should be used to assess the need for acetylcysteine administration in all patients presenting with deliberate self-poisoning with paracetamol, regardless of the stated dose. The management of acute paracetamol exposure with known time of ingestion is summarised in a management flow chart (Box 2) and the management of supratherapeutic ingestion is shown in Box 3.

It is important to note that the paracetamol treatment nomogram has not changed, and that the acetylcysteine regimen remains the same as in the previous guidelines.

For immediate-release paracetamol overdoses of greater than 30 g, activated charcoal should be administered up to 4 hours after ingestion. For massive modified-release paracetamol overdoses, absorption may continue until 24 hours after ingestion, and patients may still benefit from activated charcoal treatment after more than 4 hours.

As per the previous guideline, acetylcysteine treatment should be started immediately if more than 200 mg/kg or 10 g (whichever is lower) has been ingested. Two assessments of serum paracetamol concentration 4 hours apart are required, the first at least 4 hours after ingestion.

Liquid paracetamol ingestion by children under 6 years of age

Patients should have serum paracetamol and ALT concentrations measured if they meet the criteria for supratherapeutic ingestion (Box 1). The main changes in the guidelines concern the criteria for assessment in those who have ingested more than 100 mg/kg/day or 4 g/day (whichever is lower) per 24-hour period for longer than 48 hours. Patients only require assessment if they have symptoms such as abdominal pain or nausea or vomiting. Management is outlined in Box 3.

The guideline essentially remains unchanged, except that dosing should be based on actual body weight rounded up to the nearest 10 kg, with a ceiling weight of 110 kg.

This was not discussed in detail in the previous guidelines. Acetylcysteine should be continued until the patient is clinically improving, ALT levels are decreasing, the international normalised ratio (INR) is improving and less than 2, and the paracetamol concentration is less than 10 mg/L (66 μmol/L). Regular clinical review and 12-hourly (or more frequent) blood tests are recommended if there is clinical deterioration.

A liver transplant unit should be consulted if any of the following criteria are met:

This is a summary of the updated guidelines for the management of paracetamol poisoning in Australia and New Zealand. The full guidelines are available on the website of the Medical Journal of Australia (www.mja.com.au/sites/default/files/issues/203_05/Guidelines_paracetamol_Aus_NZ_2015.pdf).

Where there are any concerns regarding the management of paracetamol ingestion, advice can always be sought from a clinical toxicologist or the Poisons Information Centre (telephone: 13 1126 in Australia, 0800 764 766 [0800 POISON] in New Zealand).

Box 1  Paracetamol dosing that may be associated with hepatic injury 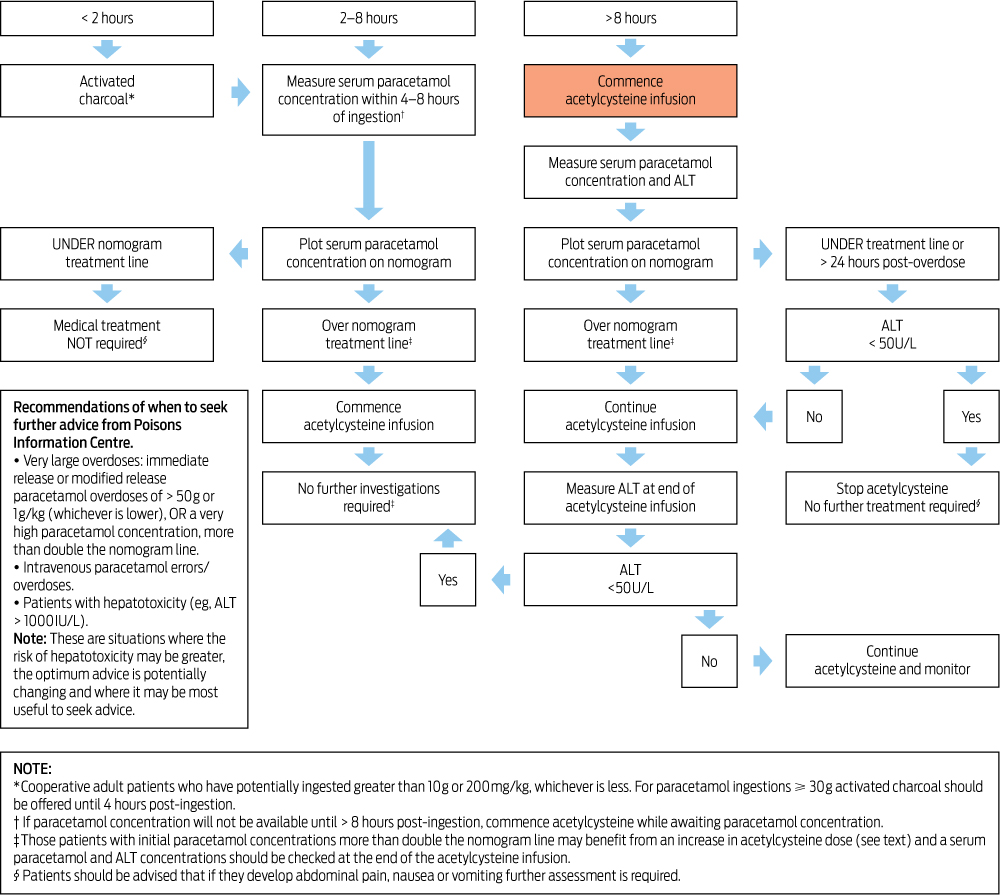 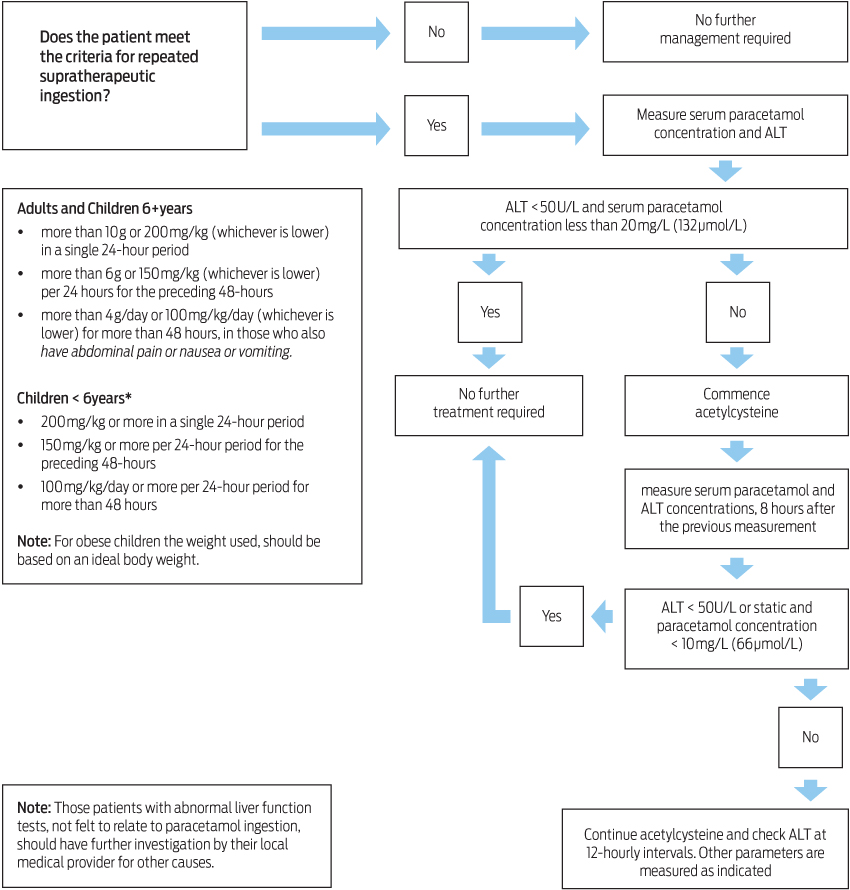 We thank Clinical Associate Professor Simone Strasser (Royal Prince Alfred Hospital) and transplant hepatologists from around Australia and the Kingboyuan;rsquo;s College, London, for their input regarding patients requiring discussion with a liver transplant unit.