Has alcohol consumption in Australia increased in recent years?

Estimating the consumption of alcohol by individuals and societies is notoriously difficult, especially as it frequently relies on self-reported data. Much depends on the quality of the data-gathering instrument, the questions asked, and the veracity of the survey sample.

The Australian Bureau of Statistics (ABS) conducts periodic health surveys to collect information on the health of Australians, including data on their alcohol consumption. The 2001 National Health Survey1 was the first for which the ABS made the confidentialised unit record files available, enabling researchers to undertake detailed data analyses. Further health surveys were conducted in 2004–2005, 2007–2008 and most recently in 2011–2012.2 As is typical for ABS surveys, they were based on sophisticated sampling methods and face-to-face interviews conducted by specially trained staff, with response rates of 80%–90%. These surveys are therefore of the highest quality. Alcohol consumption data were collected from respondents aged 18 years or over in the 2001 survey, and from those aged 15 years or older in the 2011–2012 survey. In this article, we compare the data from these two surveys to determine whether alcohol consumption in Australia changed over this period.

Alcohol consumption by adults aged 18 years or over

Respondents who reported having had an alcoholic drink during the week before the interview were asked to provide details about the amount, brand and type consumed during the most recent three days. This information was converted by the ABS into numbers of standard drinks (equivalent to 10 g or 12.5 mL pure alcohol).

The socioeconomic gradient in alcohol consumption

Analysis of the data from both surveys in terms of the education, occupation and labour force status of respondents indicated that tertiary qualifications, employment and white-collar occupations were associated with lower daily levels of alcohol consumption.

The socioeconomic gradient in alcohol consumption was also observed when data from the 2011–2012 survey were analysed according to the Index of Relative Socio-economic Disadvantage (IRSD) for each respondent’s neighbourhood. The IRSD is one of the multidimensional Socio-Economic Indexes for Areas (SEIFA) calculated by the ABS from 2011 census data on variables such as education, occupation, unemployment and household income.3

Box 2 presents the weighted average daily alcohol intake over days recorded by IRSD quintiles. Quintile 1 includes areas with the highest levels of socioeconomic disadvantage (ie, the most disadvantaged 20%) and quintile 5 the least disadvantaged. The difference in alcohol consumption between the highest and lowest quintiles was in the order of 21% for adults (aged 18 years or older) and 34% for teenagers (15–19 years). Mean alcohol consumption among teenagers was substantially higher than for adults in every quintile.

Both health surveys also analysed alcohol consumption data in terms of the 2001 National Health and Medical Research Council (NHMRC) guidelines for minimising the longer-term risk posed by alcohol consumption (low-risk intake for men: up to 4 standard drinks per day, medium risk: 5–6, and high risk: more than 7 standard drinks per day; for women: about half these levels).5

While the sex differences in alcohol consumption we noted earlier persisted, 50.9% ± 0.51% of all respondents aged 18 years or over who reported drinking during the week before the 2001 survey were in the low-risk category, 6.7% ± 0.24% in the medium-risk category and 4.1% ± 0.19% in the high-risk category. The corresponding statistics for the 2011–2012 survey were 48.0% ± 0.55%, 7.1% ± 0.26% and 4.7% ± 0.24%, respectively. These figures indicate a decline between the two surveys in the proportion drinking at the low-risk level, with increases in both the medium- and high-risk categories. A comparison for drinkers younger than 18 years was not possible because of the unavailability of data in the 2001 health survey.

The 2009 NHMRC guidelines for reducing lifetime risk from drinking alcohol6 were used to analyse the 2011–2012 survey. Unlike the 2001 NHMRC guidelines, the 2009 guidelines do not provide separate recommendations for men and women. In order to reduce the lifetime risk of disease or injury, they recommend “drinking no more than two standard drinks on any day” and “no more than four standard drinks on a single occasion”.

The number of standard drinks consumed during the week before the interview (7-day average) was used to identify respondents who exceeded the 2009 NHMRC guidelines. Among those 18 years of age or older, 29.2% ± 0.73% of men and 10.1% ± 0.51% of women had exceeded the 2009 guidelines’ safe level, while the corresponding figures for those aged 15–19 years were 35.0% ± 4.57% (men) and 19.8% ± 3.57% (women). Box 3 depicts the percentages of persons exceeding the 2009 guidelines by age and sex. For every age group, the proportion of men exceeding the guidelines was significantly greater than that of women, consistent with the sex differences in alcohol consumption noted earlier.

Our analysis of the data from two nationally representative surveys suggests that the consumption of alcohol in Australia has increased in recent years. A sex difference in alcohol consumption by adults was evident in both surveys. Based on the 2011–2012 survey, the prevalence of alcohol intake among those aged 15–19 years was significantly higher than in adults. Moreover, relatively disadvantaged people reported higher consumption levels, and they also spent a somewhat larger proportion of their household budget on alcohol. 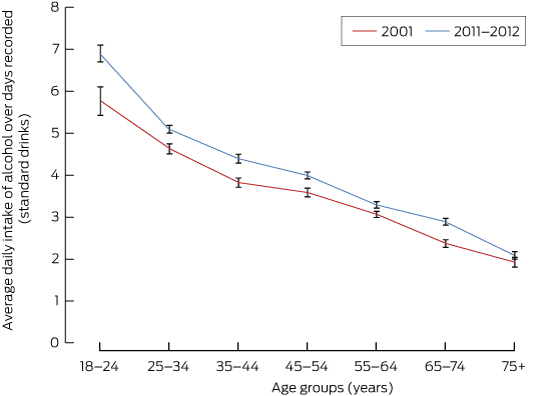 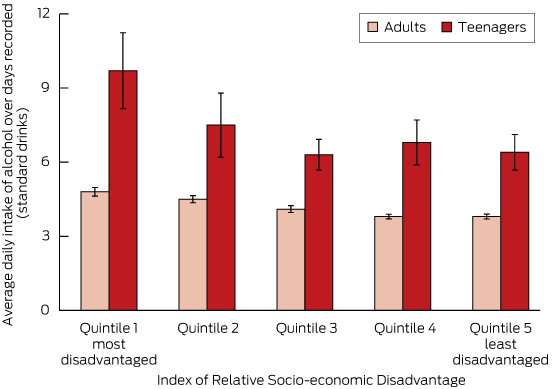 3  The proportions of respondents whose alcohol consumption (7-day average) exceeded the 2009 National Health and Medical Research Council recommendations for safe drinking during the week before the interview, by age and sex 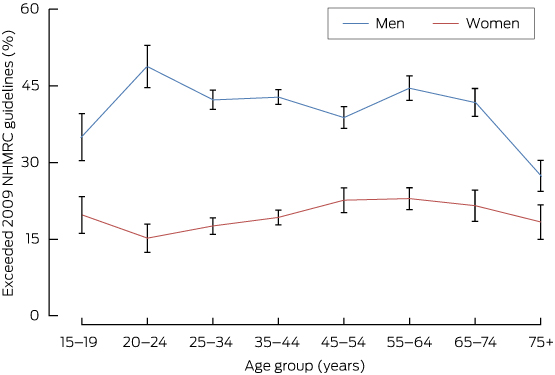 What exactly are the "weighted daily averages" of drinking? Is it average over the three days the respondents were asked in detail about, or the extrapolated average over 7 days? There is a difference since as the ABS site says (http://www.abs.gov.au/ausstats/abs@.nsf/Lookup/9AD599F2C7227404CA257B8D00229E97?opendocument) more interviews were done earlier in the week so weekends (when alcohol consumption is highest) were over-represented. This inflates these values a bit however measured - but more so if averaged over 3 days rather than 7. The figures are useful for comparisons (as the article uses), but I wonder about the magnitude. As the ABS puts it "ABS analysis indicated that the 3 day methodology has a small impact on the overall level of health risk at the population level, however, as the effect is considered to be stable over time, analysis of relative risk levels over time should not be affected. " (4363.0.55.001 - Australian Health Survey: Users' Guide, 2011-13 -> Health Risk Factors -> Alcohol).

Also, are the 40% of respondents who did not consume alcohol in the last week included in these daily averages? If not, then again these averages are inflated.

Yusuf and Leeder (1) showed alcohol consumption increased in Australia between 2001 and 2011 when examining ABS National Health Surveys (NHS). However, this is a selective and flawed picture of Australian drinking trends.

By analysing just two waves of the NHS data, the authors miss a significant turning point in consumption trends, led by declines among young drinkers (3). Further analyses using 2004/05 and 2007/08 NHS would provide a clearer picture of consumption trends (e.g. ABS reports on the NHS show a recent decline in risky drinking (4)), but these surveys were not included.

Alcohol consumption is measured idiosyncratically in the NHS using flawed measures involving the last three drinking occasions (within the past week), meaning that estimates are biased by the day of the week that the survey is conducted (5). Further, Yusuf and Leeder appear to report consumption per person who drank in the week before the survey (rather than per capita), making comparisons between teenagers and adult drinkers problematic, given their markedly different drinking frequencies.

Relying solely on NHS data to estimate Australian alcohol consumption trends is problematic; a more complete picture than that presented in Yusuf and Leeder is required.

“Average alcohol consumption converted into standard drinks - over days recorded” was the only suitable variable that was available in the confidentialised unit record files for the 2001 and 2011-12 National Health Surveys.
The weighted daily averages were based on responses to questions about alcohol consumption (in standard drinks) over the three most recent days when alcohol was consumed during the week prior to the interview (see the titles and Y-axes of Boxes 1 and 2). Persons not reporting alcohol consumption during the past week were not included in the denominators of these weighted averages.
Apart from collecting the consumption data for each day of the week - which ABS did not do –converting a 3-day into a 7-day average by extrapolation will not necessarily provide an accurate estimate of the weekly average. In any case, such a conversion would not have changed our findings regarding the increased alcohol consumption over the 10-year period.

Livingston and Dietze’s second reference contains the following two statements from the ABS:
1. “Estimates of 'apparent consumption' are obtained from information related to supply (for example, excise data on alcohol produced for domestic consumption, and data on imports) and do not represent actual consumption.” (See: Media Release section).

2. “This estimation differs from personal consumption estimates from a survey from which individual and group patterns may be derived.” (See: About This Publication section).
Since both NHS were each conducted over two financial years (2001 NHS from February to November 2001 and the 2011-12 NHS from March 2011 to March 2012), the apparent consumption figures corresponding to them were 10.12 and 10.17 litres respectively (derived from data in Table 7 of the second reference). These figures corroborate our finding of an increase in alcohol consumption over the 10-year period rather than the claims made by Livingston and Dietze.
We used only the 2001 and 2011-12 NHS and not the two intervening surveys conducted in 2004-05 and 2007-08 as Livingston (reference 3) did in his paper by ignoring the 2004 and 2007 National Drug Strategy Household surveys.
The criticisms made by Donath (reference 5) of AHS methods referred to the 1995 NHS and do not necessarily apply to the surveys used in our paper. Finally, the consumption measures used in the NHS were quite similar to measures used in surveys in UK, USA and elsewhere.